Making my own colour catchers???

I used to prewash all of my fabric, often ending up with ravelled ends tying the fabric into a ball or a knotted mess. Especially with smaller pieces. And now that all of these precuts are available, how on earth would you do it? Charm squares, for instance: what a mess that could be. And I've been hearing that a lot of quilters seldom or never prewash now. Supposedly better quality cottons and better quality dyes, so not as much risk of the colours bleeding.
Having just finished my grandson's quilt, I ended up with green-tinted Machingers, even though this was not cheap fabric. So I knew there was a risk of the colours running. That, combined with the fact that my cats had pretested the quilt, adorning it with their fur, made me decide to prewash the whole quilt. So I wanted to try Color Catchers. The problem is I couldn't find them anywhere. I even found a forum post where someone said they emailed SC Johnson who replied that they were no longer available in Canada.
Many people swear by them and wouldn't do without them and I really wanted to give them a try. So I googled to see if I could find out how to make them myself. I actually found quite a few links, but the basic recipe was pretty much the same: 1 tablespoon of washing soda in 1 cup of hot water for 12 white washcloths. However, I also found one site where someone actually experimented to see if it worked. No, it did not. But I had found so many sites that shared the "recipe." Surely, all of them couldn't be wrong. I was rather skeptical, I decided to do my own experiment. I intended to wash the quilt anyway, so I made up my own batch of colour catchers. The first thing I noticed is that here is no way that only 1 cup of water is enough to dampen 12 washcloths, so I made up a second batch with a total of 2 cups of water and 2 tablespoons of washing soda and that was pretty much sufficient. However, I did have my doubts. As one friend pointed out, washing soda is normally used in the washing machine with the laundry - wouldn't it just dissolve right out of the cloth in the wash water? Even with doubling the recipe, that's still only 1 tablespoon of washing soda for 6 washcloths. There were some other recipes that call for salt, but I haven't tried them. Most of the recipes called for the washing soda, so I figured that was the most logical to try.
I'm sorry I didn't take pictures with my first experiment, but it might not have shown up that well anyway. When I washed the quilt, I included one of my home-made colour catchers and a white washcloth from my linen cupboard. The quilt, which didn't have any "strong" colours like fire-engine red or midnight blue, came out looking fine. The washcloth, however, did not. It was a dingy off-white greyish-green colour, while the colour catcher showed only a mild hint of green. If the colour catcher had done its job, the washcloth should have remained white. Fail! However, I wondered why the washcloth would absorb more colour than the color catcher. They were both 100% cotton terrycloth. I'd had the washcloth several years and it had been through numerous washings, while I had never washed the cloths I had purchased for the colour catchers. Could the sizing/chemicals in the new fabric have prevented it from doing its job? None of the recipes said to prewash the fabric used, but could it have been a factor? Could the fact that I dried them outside in the sun after soaking them in the washing soda solution have adversely affected their effectiveness? Was the 1 tablespoon of washing soda sufficient to do the job? I decided to experiment again.
Meanwhile, I googled on the effectiveness of Color Catchers. While most of the results were positive,  I also found a few naysayers, including Consumer Reports. Hmm, on to my second experiment.
This time I prewashed all of my cloths. To my 2 cups of boiling water, I added 2/3 cup of washing soda, so much that it made the cloths stiff once they dried. And I dried them on my drying rack in the house. I decided to give them a much tougher test than the John Deere quilt: cheap red fabric. 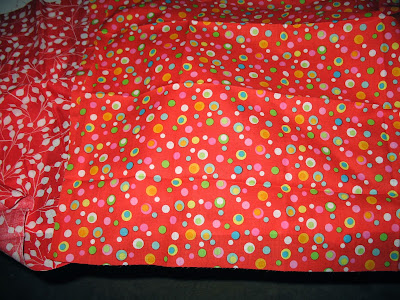 I also threw in a few bold coloured washcloths that I'm not sure if I've washed before, plus my red polyester Christmas napkins which are given to bleed (not pictured). 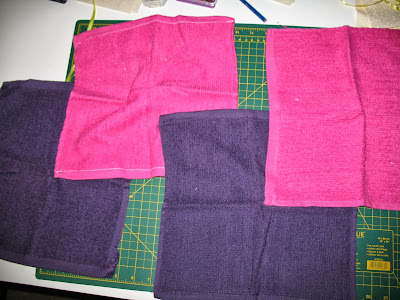 Finally, I included a white washcloth (unused) and a pair of white socks (used). I put both socks in because I figured if the colour was going to bleed, I wanted both socks to be pink. 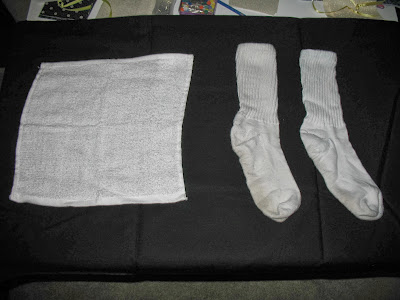 I washed the load in cold water on the gentle cycle, as I would my quilts.
Results: 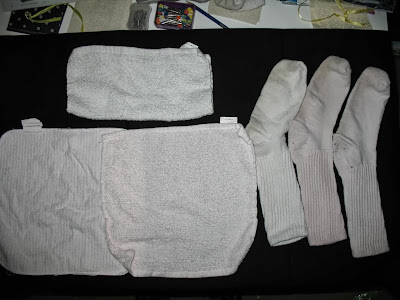 The top washcloth and the first sock on the left were not washed in this load and are included in the picture for comparison purposes. The bottom left washcloth is the colour catcher. The one on the right is the test washcloth. As you can see, both it and the socks absorbed more colour than the colour catcher. 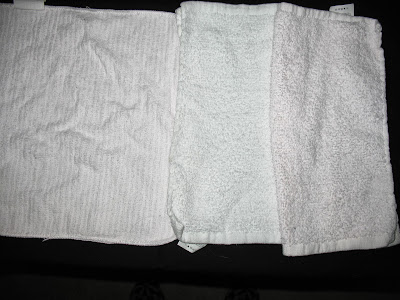 In this picture, the colour catcher is on the left, the control (unwashed) washcloth is in the middle and the test washcloth is on the right. The colour catcher did pick up some dye, but not only did it not prevent the dye from bleeding onto the other items, it didn't even absorb as much of the dye as the other items did. I double checked - it is 100% cotton, but it is a "bar wipe," not a traditional washcloth, so the terry is not as dense. I'm not sure if that is a factor in why it doesn't absorb as much of the dye or not. Or does the washing soda actually resist the dye? But the point is, it is the cloth that was treated with the washing soda, so if this premise was true (that washing soda attracts dye), it still should have absorbed more dye.
If I had washed with warm or hot water, on a regular cycle, I'm afraid the results would have been even more pronounced. So making your own colour catchers is a waste of time and money.
Finally, in all my "googling," I was able to find out about Dr. Beckmann Colour and Dirt Collector, which is supposed to do the same job. And it's available in Canada! So, I will call my nearest dealer to see if they actually carry it and pick some up to give it a try.
By the way, Canadians, you can order  Shout Color Catchers