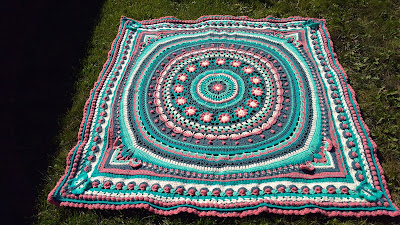 I believe that I've mentioned before that I dislike it when I'm crocheting in the round, and the pattern says, "You will notice the edge is starting to curl up at this stage. Don't worry, it will work itself out over the next few rounds." Or worse yet, "You will need to block it at this point to make it lie flat." For all the crochet - and knitting - projects I've done over the years, I've only ever blocked a few. I think I was still a teenager when I made an afghan for a friend's baby. The instructions said to block it so I did, though I'm not really certain why I was doing it. And I honestly don't think I needed to. I was just following instructions. Then there was the cowl I made with Charisma yarn. It was so stiff that I tried washing it to see if it would soften up, and blocking it afterwards. It didn't help. I also tried blocking the loom-knitted scarf that I made for my ex because it kept rolling up like a sausage. Blocking really didn't help that much either. (You can see both of these projects in this post). And then, of course, there are these round afghans... I really don't think that you should have to block to make crocheted circles lie flat. Years ago, I cut something out of somewhere (a magazine?) that told how to make crochet circles lie flat. It's just a matter of adding enough stitches per round. It shouldn't really be that difficult. Okay, I know that certain patterns require a certain number of stitches in order for the pattern to work out evenly. But crocheters have been making doilies for generations (and I still haven't figured out why), and they lie flat. And they have lovely, fancy patterns that work out evenly. Were people just better at math and therefore pattern development back in the "olden days" when people actually used doilies? I really don't know, but I do find it irksome.
But with this particular afghan pattern (Queen Mandala Throw by Annamarie Esterhuizen), I found that I had to make too many adaptations to make it work. It's not that I can't follow directions - I just don't like to have to keep forcing things to work. I'm not a pattern designer, and I have a lot of respect for those who do develop patterns. But they need to work. And I feel sorry for inexperienced crocheters, who may end up thinking it's just them and not the pattern. I would really hate to see someone give up on crocheting before they really even got started because of a faulty pattern.
So, this afghan was getting plenty big enough, and I was plenty frustrated enough, and I decided to start squaring it off. Once I got it reasonably square, I finished it off, mostly using directions from another afghan pattern (Sophie's Universe by Dedri Uys), and finally adding a butterfly on each corner, with directions (which I also had to adapt) from a youtube video.
So I took it out this afternoon for its photo shoot.  And sooner than post all of the individual photos, I will share the video I made on Google.
I keep trying to accomplish my goal of finishing all of my WIPs and UFOs before starting anything new, but there's always another "must do" popping up... At least I'm glad this one's finished.
Posted by Laura B at 20:25 No comments:

I was checking something on my blog the other day, and realized that it's been quite some time since I posted anything. So, first an update: the sciatica is much better, thank the Lord, but not totally healed. That will just take time. My leg still aches, sometimes worse than others. And the pain continues to migrate: sometimes the knee, sometimes the shin, sometimes, the thigh, the hip, the whole leg. I continue to exercise. I don't think that I've mentioned before that sometimes when I lie flat on my back, I get dizzy/nauseated (I assume due to Meniere's). And a lot of exercises for sciatica are done lying flat on your back. Earlier in this whole sciatica thing, I was limited in how much exercise I could do, not just because of the pain, but also because of the dizziness and nausea. Then not only did the pain improve, but so did the dizziness and nausea, so I was able to complete my whole regimen of exercises (given to me by 4 different physiotherapists). Recently however, nausea has returned with a vengeance. So, I took my sister's advice and took a half tablet of Gravol (she actually takes a quarter when her Meniere's flares up), which might have provided some relief. Another thing I noticed is that the nausea is worse if I don't use a pillow. This morning, I did some of my exercises while still in bed without any noticeable nausea. Okay, must use a pillow, at the very least...
So today I took my hearing aids in for servicing, had lunch and then went on a field trip to Rocky Mountain Antique Mall. I have been looking for a ladder to display my quilts and afghans in my living room. And the antique mall had several in the parking lot, but none that was really what I was looking for. Most of them were much too long. There was one that was 7 feet, but the rungs were only 13" across. I considered a wider one, but it was about 10 feet long. I would have had to have caution flags on it as it would have hung over the end of my truck. I thought about sawing off the excess right there and then (and one of the staff offered to let me use a vintage handsaw), but I really wanted any trimming to be done where I could measure and do it properly. <sigh> So I'm still considering.
While I was there, I figured I might as well peruse the entire mall - an ambitious undertaking for someone who still has some challenges walking without pain. But I did it (not without pain, however). The first items I noticed in the parking lot were these: 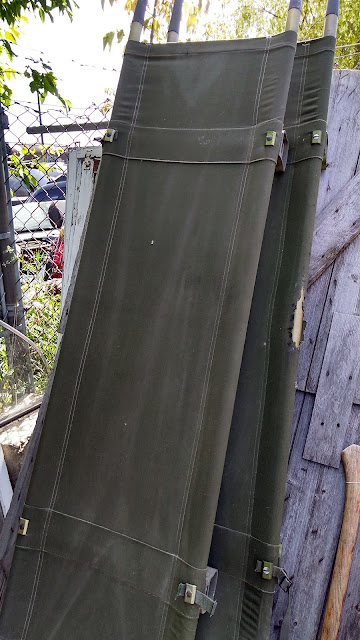 Two khaki - and therefore I assume military - stretchers. Now these are in good shape - much too good for them to have harkened back to the Second World War. Nevertheless, they are military stretchers, and my father was a stretcher bearer during WWII. And I got a catch in my throat and it nearly brought tears to my eyes. Miss you, Dad.

In addition to the ladders and stretchers, I found this in the parking lot: 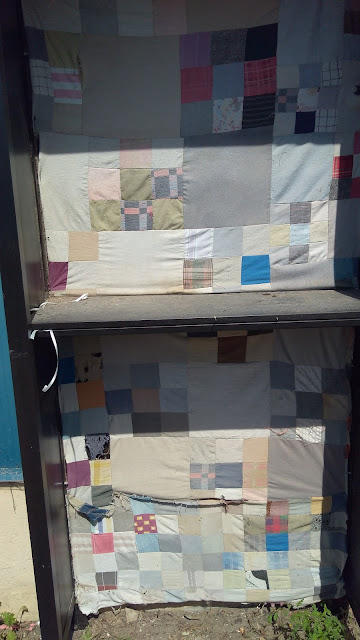 Isn't that a terrible thing to do with a vintage quilt - use it to line the back of an old shelf (or whatever this is)? That shelf doesn't look like it was worth salvaging, let alone waste a vintage quilt on.
Just inside the door, I found this: 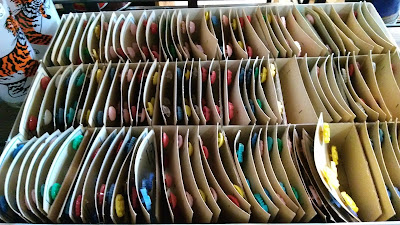 A whole box of intact button cards - from when? The 30s? I'm not sure, and didn't notice if the tag said. Look at those colours! I actually have some of the same buttons in my button tin that came from my mother or grandmother.
Here's a vintage blanket (quilt) rack: 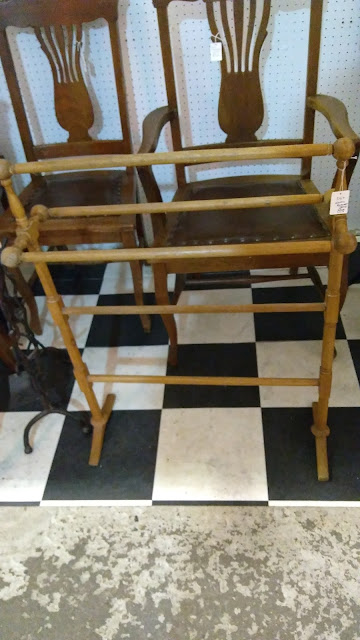 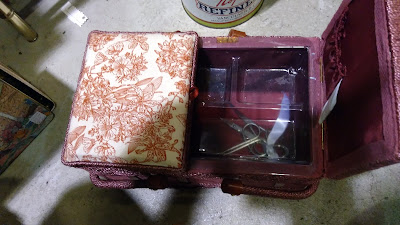 Wouldn't this be a great chair to "stage"  your favourite quilt in? 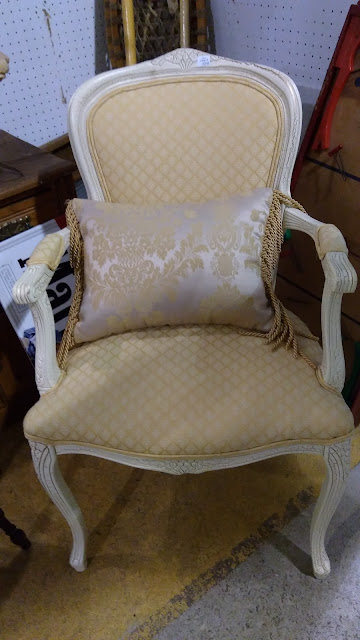 I could hardly believe when I saw these pot menders were from my hometown! Unfortunately the flash made it difficult to read the words: "Assembled at Friendco Sheltered Workshop, St. Thomas, Ont." I remember Friendco, or the Friendship School as it was also known. It was for the developmentally disabled. 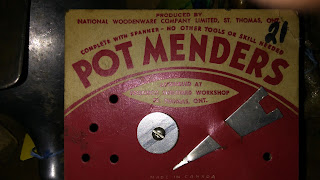 I don't remember the story behind it (if I ever knew), but in my family a dressform like this was referred to as "Dumb Dora." 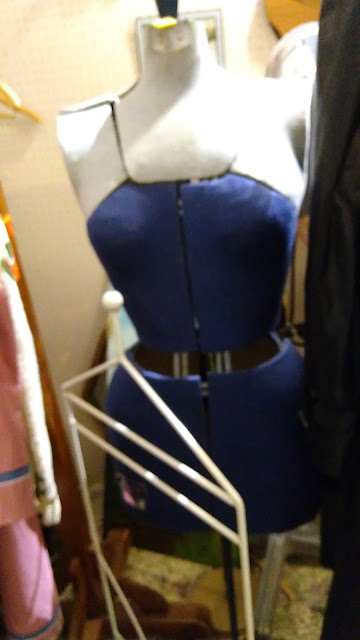 It was cheaper than the new one I bought for my daughter, and she probably would have liked the vintage one better.
A yarn winder: 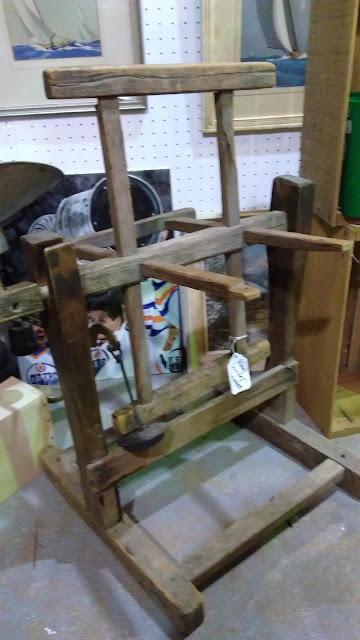 Another vintage quilt, only this one is being sold as a quilt and not being used as the backing for a shelving unit: 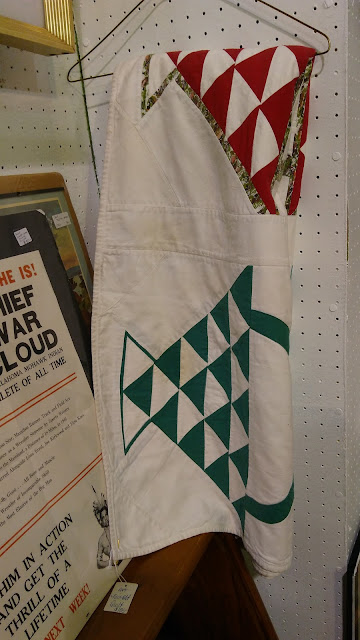 One of those built-in ironing boards - I guess you could fit it between the studs. Kind of a cool idea, actually. 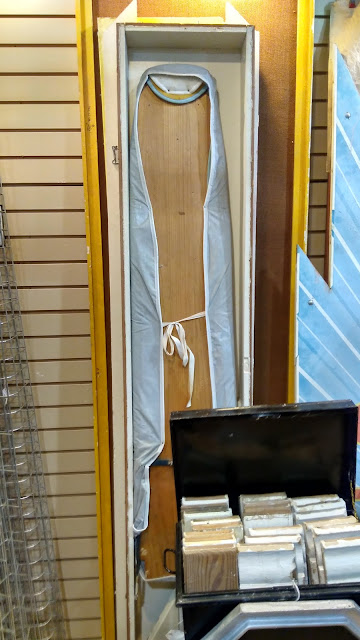 I had one of these orange tractors when I was a child, and I remember it with great fondness. But I didn't scribble on mine. And I highly doubt that my parents paid the amount this vendor is asking. 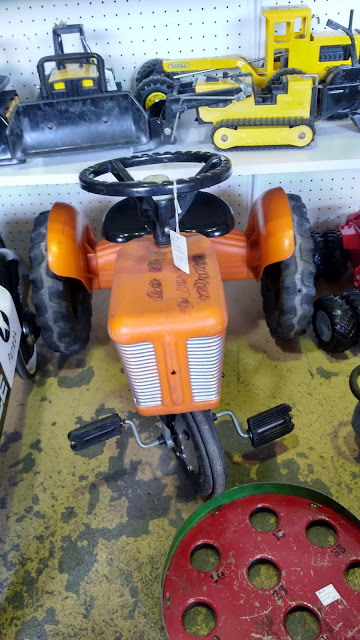 For the John Deere fans in the family, specifically my grandson and my great nephew, Jake. 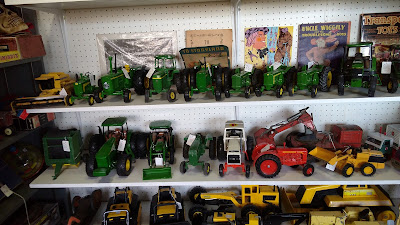 I can't remember the price on this baby. I think it was under $100. 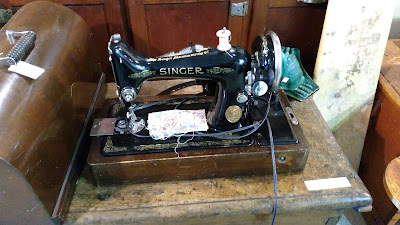 I also saw a Featherweight for $280, but it didn't get its picture taken.
And finally, what I kept going back to: 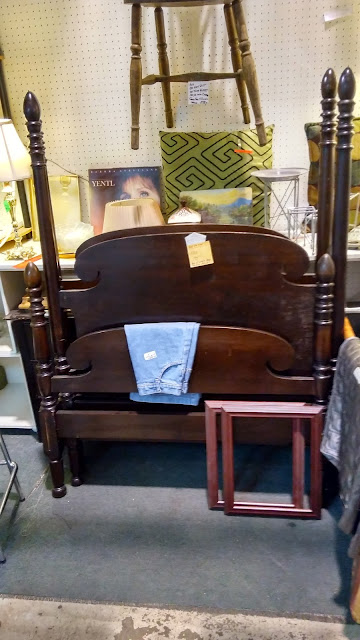 Yes, two 1920s black walnut twin beds, going for an amazing price. These interested me far more than the ladders in the parking lot. If I'd known that they would both fit into one of my spare bedrooms, they likely would have come home with me. And think of how well they would show off any quilt placed upon them. Would they look ridiculous in a 1970s house? Never mind - my dream home is one of those big old brick farmhouses in southwestern Ontario.
I'm going upstairs to measure.
Posted by Laura B at 20:56 No comments: