So Much for My Quilting Hiatus

Quilting is addictive - I can't give it up. Actually I had already prepared some "hexies" for a quilt block and I didn't want them getting lost in the shuffle, while I worked on the window treatments for my trailer. So I figured I'd better finish that block. And another, and another, and...
All of the blocks for this post are from  Craftsy's 2012 Block of the Month.
For the April blocks, it was English paper piecing, something I never thought I'd do. Not only is it tedious, but it involves a fair amount of hand sewing. Years ago, when I bought my first sewing machine, one of the requirements was that it must have a blind hem stitch, so that I would never have to hem by hand again. I do not hand sew any more than I absolutely have to. When I crocheted a cardigan for my grandson for Easter this year, rather than sew it in separate pieces, I crocheted the front and back all in one piece. And the sleeves I crocheted as a long tube, instead of a flat piece that I would later have to sew together. I didn't sew any more seams in that cardigan than necessary. So, the idea of doing English paper piecing was really not appealing to me. However, I was determined to do every block in both of the BOM quilts I'm doing, even if that meant hand sewing and tedious paper piecing. So, here are my April blocks: 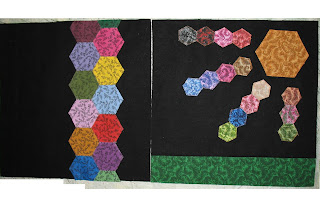 I have to admit that I'm still quite happy with my fabric choices. I love the way the black background just makes the bright colours "pop." While I don't particularly care for some of the individual fabrics within the fabric bundles - browns have never ranked high with me, and I would have been happier with more purples and at least one true orange - generally I've been very satisfied.
In order to make all of these hexagons, I would have had to trace and cut out a template (one for each size) and then trace the template onto paper/cardstock in order to have one paper hexagon for every fabric one. As I said, English paper piecing can be quite tedious. So I skipped that step and purchased precut paper hexagons online here: Paper Pieces. The prices are reasonable, my order was shipped quickly and I got good customer service. And it sure beat cutting out all of those hexagons myself. I still had to cut out the fabric hexies, but I used my rotary cutter for that.
The block on the left is the Hexie Stripe Block and the one on the right is the Sunny with a Chance of Hex block. I used all but two fabrics from one fat quarter bundle in the first one and every fabric from another fat quarter bundle for the second one. All of the hexies had to be basted by hand and sewn together by hand, and I actually hand-appliqued the hexie stripe on the first block. And I survived. :-) So, hand sewing really isn't deadly after all. But I doubt I'll be in a hurry to use hexagons in a future quilt. However, I am glad I did it and am pleased with the results.
Here are May's blocks: 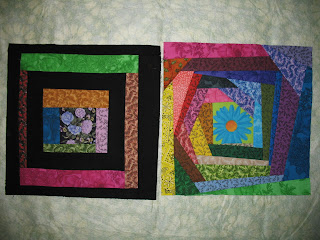 This month's topic was Wonky Log Cabin Blocks. On the left is the Modern Log Cabin and on the right is the Wonky 5-sided Log Cabin, though mine looks more like a spiral than a 5-sided figure. I have to be honest: I really didn't like either of these blocks in the course materials. The Modern Log Cabin is kind of boring to me. And the Wonky one is a little too disorganized, chaotic - I'm not sure what word I'm looking for. I just know I didn't really like it. Certainly, I feel that my use of colour improved both blocks immensely. I hope that doesn't sound too arrogant, but let's face it - there is a reason why I picked those fabrics. It's because they appeal to me and everyone has different tastes. You might think my blocks are horrid and you're entitled to think that. My niece was over and I was showing her some different blocks and quilts online, and some that appealed to her did not appeal to me, and vice versa. It's not a cookie cutter world. And that would be extremely boring if it was.
But back to the blocks, I have to 'fess up that I didn't do the Modern Log Cabin exactly as I was supposed to. I hadn't watched the video yet and only briefly glanced over the instructions. The centre square was supposed to be outlined in a round of background fabric, then a round of print, then another background and a final round of print. I did the opposite. In the video, the instructor used all one print for each print round and I used 4 different ones. But I'm still happy with my block.
Another confession: I had originally planned on using only fabric from the three fat quarter bundles that I bought for this project. However, I was trying to follow a rainbow sequence in the Wonky block and really didn't have enough oranges and yellows, so I borrowed from my stash. You may recognize the one yellow along the left edge - it's the centre fabric from the offset log cabin blocks from the 2013 BOM. There are also a couple of orange pieces, one above and one to the right of the aforementioned yellow strip, which are from fabric I have purchased for a quilt for my daughter. And both of the fussy-cut centres are from my stash.
I think I prefer the hexie blocks over the log cabin ones, but I doubt I will use any of these blocks again. However, you never know...
Now, will I be able to leave quilting long enough to get those curtains done?
Posted by Laura B at 22:19