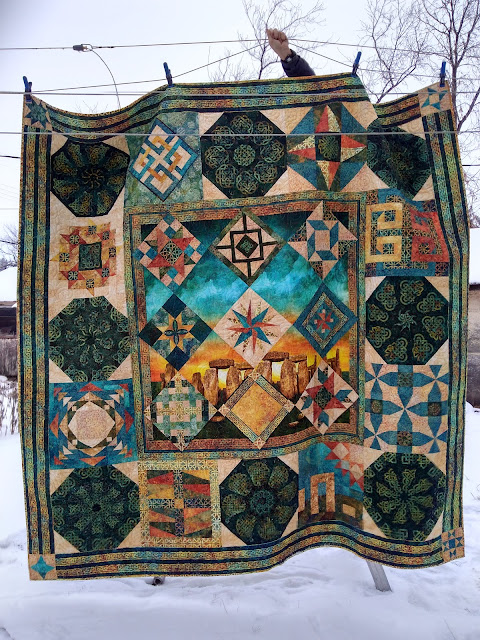 This quilt is my entry into the Stonehenge Solstice Block Party Challenge. I'm calling it "Audacious" because I think it's audacious of me to think I can compete with quilters from across North America and around the world. Even if I don't win anything, I still feel that I have accomplished something. Actually getting it finished before the deadline was challenging enough.
And what is the challenge? In honour of the 10th anniversary of Northcott's Stonehenge family of fabrics, quiltshops were invited to create their own block from the Stonehenge Solstice line and quilters were invited to collect a minimum of 12 of these blocks and create a quilt from them, using only Solstice and a few other Stonehenge fabrics in the quilt top and binding. Fortunately, I love Stonehenge fabrics.
When I first heard about the challenge, I looked at the map showing which shops I could go to in order to collect 12 blocks. That would have taken a fairly extensive road trip, but the good folks at Northcott assured me that I didn't have to visit every quilt shop in person. Phew! While I know that would be fun, I don't have the time or the money to do that big of a shop hop. So, I looked online to see what was available, and discovered that I could order all of the Len's Mill Store blocks online at once. The problem was I had assumed that the blocks were all a uniform 12" size, and that I could make a nice rectangular quilt of 4 rows of 3 blocks each. Now I realize how lacking in flare that would have been and certainly not something calculated to win any prizes. I needed to do something to give this quilt that "wow" factor, and figure out how to combine 18", 12" and 6" blocks into one quilt, because that is what quiltshops had available! Len's Mill Stores alone offered 5 - 18", 5 - 12" and one 6" block(s). And, as I was to discover, the Alberta quilt shops also varied in what size of block they offered.
Before I decided whether or not to order from Len's Mill, I had to determine where I actually wanted my blocks to come from. Originally, I had thought about attempting to obtain one from a shop in each of Canada's provinces and territories (13 total - not sure how I would have combined that odd number into a quilt). Unfortunately, there wasn't a participating shop in each of them. Then I thought about getting one from every place I had lived - also wouldn't work because the quilt shop in the town I'm currently living isn't participating. One or two from where each of my siblings live? No, not that either. I finally settled on having all of my blocks from either Alberta or Ontario, the two provinces where I've lived the longest. So, I went ahead and ordered all of the Len's Mill blocks, and, of course, they were backordered. And in case you're wondering, Len's Mill is one of my favourite shopping destinations when I'm in Ontario. And I actually visited 2 of them - London and Woodstock - on my latest trip there.


I think you can see why I like it so well.
Meanwhile, I started collecting my Alberta blocks. And determining how I was going to arrange three different sizes of blocks into a quilt. I also contacted Northcott/Stonehenge to ask if I could create my own blocks to use in my quilt: Yes, as long as I had at least 12 blocks from quilt shops. Good, I wanted to be able to add my own touch to make my quilt stand out.
My first idea was to have 3 rows of 3 - 12" blocks, surrounded by a square of 12 - 18" blocks. In the centre of the 12" blocks would be my own addition - yet to be determined. I would have 2 - 18" quilt shop blocks on each side and the corners would be Kaleidoscope Octagon blocks of my own creation. I wasn't sure if I was going to use the 6" block. Then I realized that wouldn't be a whole lot more exciting than the 4 rows of 3 - 12" blocks that I mentioned above, even with the addition of the Kaleidoscope Octagons and whatever my surprise 12" block ended up being. I needed not only fabulous blocks, but an eye-catching layout if I hoped to have any chance of winning at all. Giving it some thought, I came up with the idea of setting the 12" blocks on point and filling in the spaces with the panel from the Stonehenge Solstice collection. The diagonal of a 12" block is about 17", times 3 equals 51", so I would have to add a 1½" border to this centre section to make it up to 54", the measurement of 3 - 18" blocks. I would now need 16 - 18" blocks to make the square around the centre section with the 12" blocks. That would make the quilt 90" square, which to me is a useless size. It's wide enough for a queen-sized bed, but not really long enough. And would barely cover the top of a king-sized bed. Including the 6" block as one corner of a 6" border would yield a 102" square quilt - big enough for a king-sized bed.
One problem that remained was coming up with one more 12" block. I needed a total of 9 blocks. I had 7 from quilt shops, plus my special one for the centre. Any of the quilt shops that were within commuting distance from home offered 18" blocks and I had enough of them. One shop had had a 12" block, but they were sold out. Yes, I could make a second block of my own creation, but I preferred to have another quilt shop block if I could. I only wanted one special block for the centre. While visiting Ontario this past summer, I actually picked up a second block from the Len's Mill in London, just in case I needed to use that one. Not what I really wanted to do... But then I checked the list of participating shops and discovered Stitch-it Central in London. I called and yes, they did still have block kits and yes, it was a 12" block. Hurray! It's a great shop and had quite a bit of the Solstice fabrics still available as well. I picked up some extra there along with what I picked up at Len's Mill.
Back in Alberta, I started working on this incredibly challenging quilt. I started with the 12" blocks.

Now I had to come up with my "special" block. I had determined to make a Mariner's Compass block, but I wasn't satisfied with the results I found when googling. Finally, I decided to use the Sailor's Delight block from the Bluprint course, Quick Strip Paper Piecing by Peggy Martin. 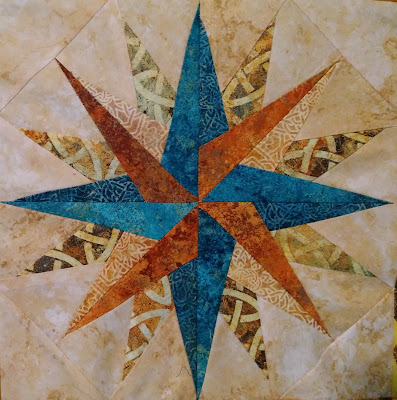 I'm not entirely satisfied with the lack of contrast between the orange print and the background, but I really didn't intend to start over again. Besides, there weren't a whole lot of options in the solstice collection. It would have to do.
And did I mention all of the sewing machine problems I was having? (See my previous post for more information). I only had until the end of December to finish this quilt and I needed a reliable sewing machine to get me there. With both Janomes in the shop, I needed a workable spare that would perform well to get me to the finish line. I finally broke down and bought a Brother SQ9130 at my local Walmart and I've been quite pleased with it's performance. That kept me humming until the Janomes came home.
Meanwhile, I started working on getting the centre section put together, which required some careful cutting of the panels. 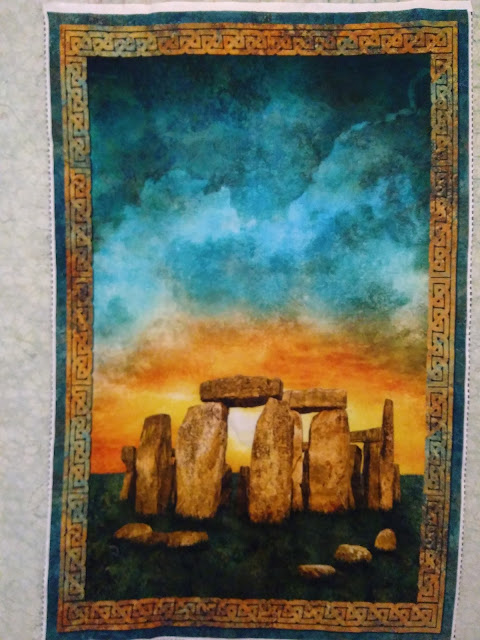 I ended up buying 6 panels because I had no idea how many I would have to cut up to get the pieces I needed. I also hoped to enter the Solstice Panel Quilt Challenge, but I didn't want to use any of my fabric until I knew what I needed to complete this quilt. And this one took so much time and effort that I didn't have the opportunity to make even one panel quilt before the deadline. I used 2 of them in this quilt, so I now have 4 to use for other projects... 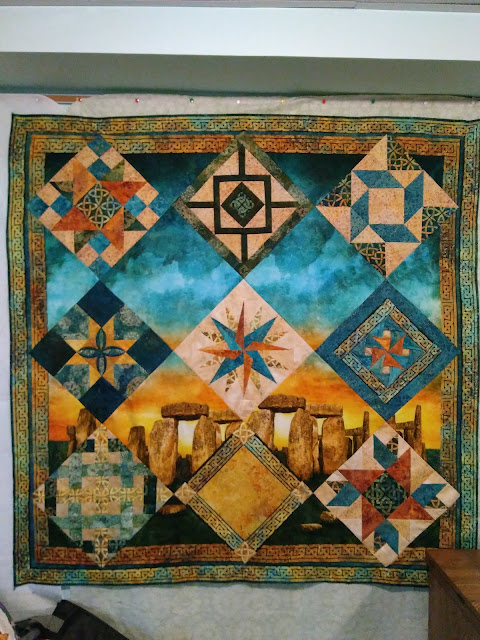 I was actually quite pleased with how this centre section turned out. If it contained 12 quilt shop blocks instead of just 8, I could have stopped here and been happy with the results. But I had already started on my Kaleidoscope Octagons. 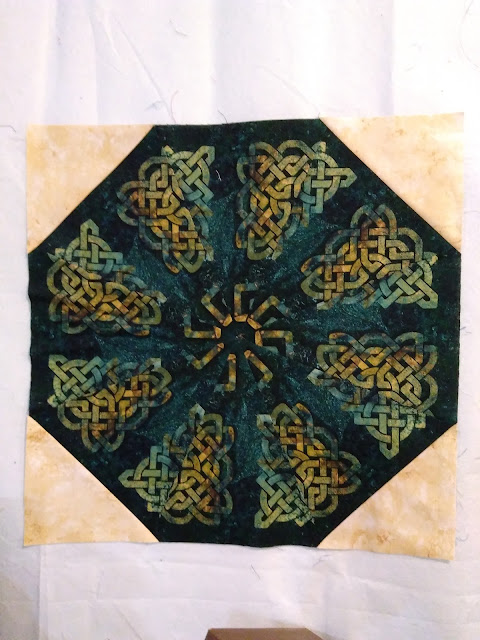