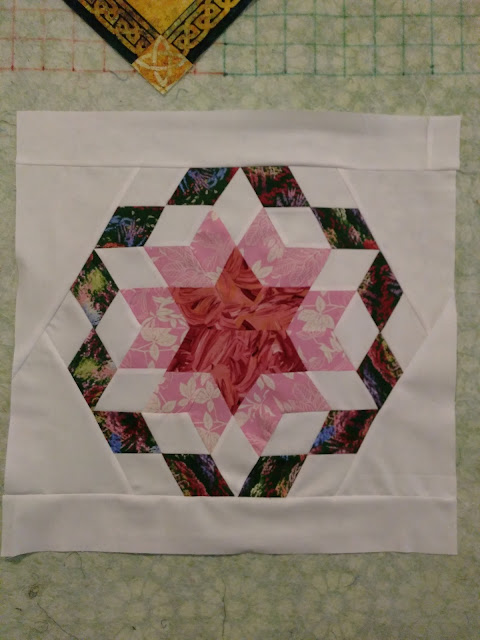 After making Damian's treat bag, I decided to try another bag and another new block, this one for my niece, Julie, whose birthday was coming up. Unfortunately, my calculations were way off when I cut the pieces to make the above Arabian Star or Dresden Tile block. I had just started adding the darker pieces when I realized it was going to end up at least 20" square, and there was no way I wanted the tote bag that big. I was also finding that the star was not lying flat. So, I set this one aside and started over. 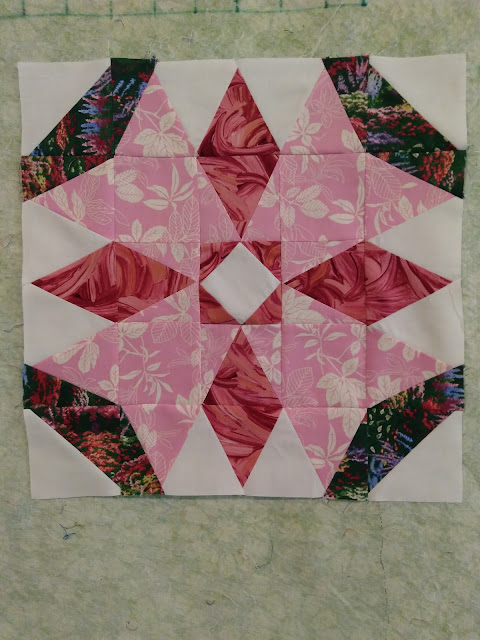 I decided to try two different 15" blocks, and had much better success. The one above is the Japanese Poppy. When I looked at the picture in the book, I figured that the Tri Recs Tools would work for this block. And they did!

The second block was the Z-Cross, which after sewing the directional print cross in the centre with all of the fabric pieces going in the same direction, I then sewed it into the bag sideways. <sigh> 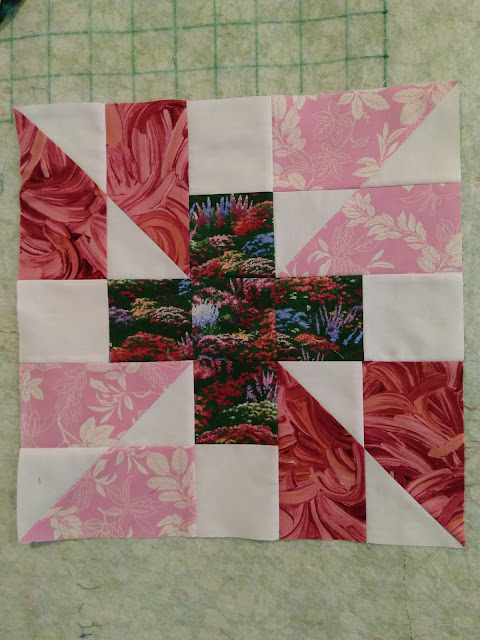 In the middle of all this, stitching along on my newer Janome, I heard a "sprong" noise and suddenly there was no tension. After fiddling with it a bit and realizing it was going to need to go in for repairs, I decided to set up the old Janome that had been my mother's. After its last servicing over a year ago, I had not used it because I was planning on giving it to my daughter. She just hadn't come to get it yet.
I had to rearrange things in the studio in order to set this machine up in its cabinet. Finally, with that done, I plugged it in and pressed on the foot pedal and nothing. There was power to the motor, but the needle wouldn't go up and down and the buttons were not responding. Totally seized up! Another machine that needed to go in for servicing. How did I end up with two Janomes down at once?
I got out the Omega and tried working with that. 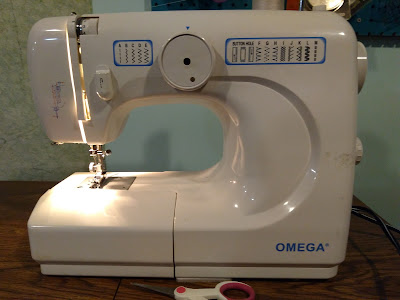 While the Janome ¼" foot fits on this machine, the needle doesn't come down in the centre of the opening in the foot, but on the far left. So, it wasn't really stitching a true ¼". And the tension was not consistent. 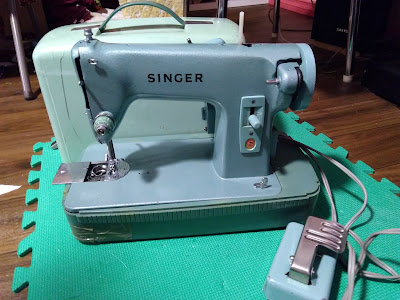 I cleaned and oiled this vintage Singer, which I had picked up at a thrift store for $20, and tried it. I wasn't entirely happy with its performance either. Again, I couldn't get the tension just right. And I didn't have a ¼" foot for it either, so I was just approximating. Both this one and the Omega could probably benefit from a servicing as well. 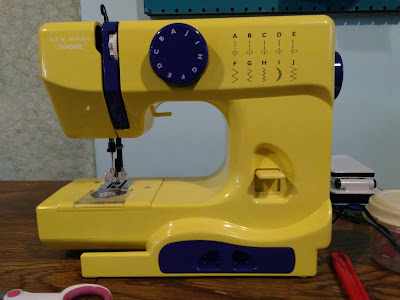 Finally, I pulled out this little Janome that I had bought for my grandson. It's made for children, so it has a guard on the presser foot to help prevent little fingers from getting under the needle. The presser foot can not be changed, nor can the needle position. And it only stitches at a slow speed. Not being able to change the presser foot, I couldn't change to a ¼" foot, so again I had to approximate. This didn't work very well because parts of the projects were sewn on 3 different machines, with inconsistent tension and varying seam widths. By this time, I had finished the tote bag and quilted it without any really major issues (aside from the sewing machine issues). 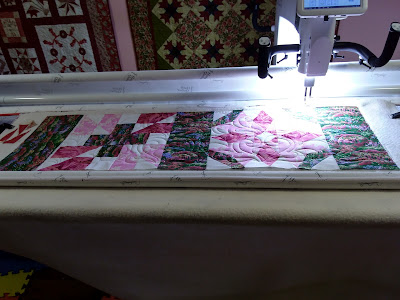 I used the Feather Heart Pantograph by Hermione Agee from Urban Elementz. 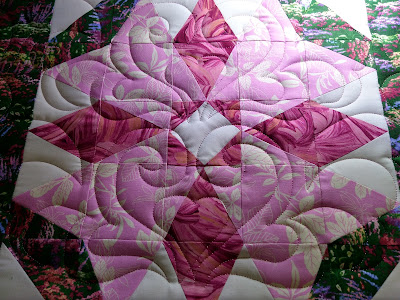 It was my first time using metallic thread on the longarm, and that worked without any serious hitch. It was Marathon Metallic 3009, with Glide pink in the bobbin 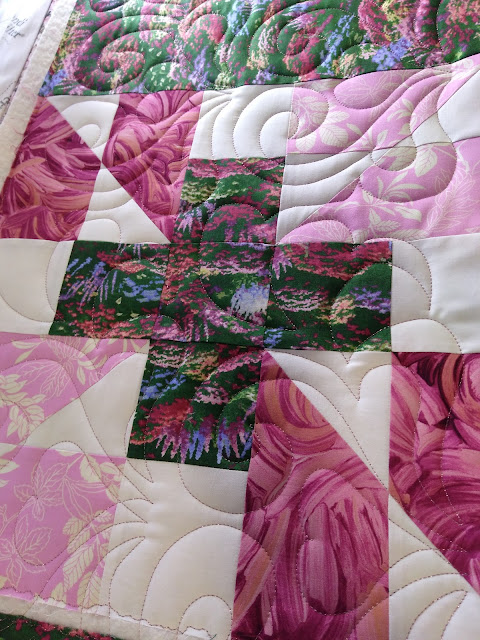 I was able to assemble it and felt pleased with the results. 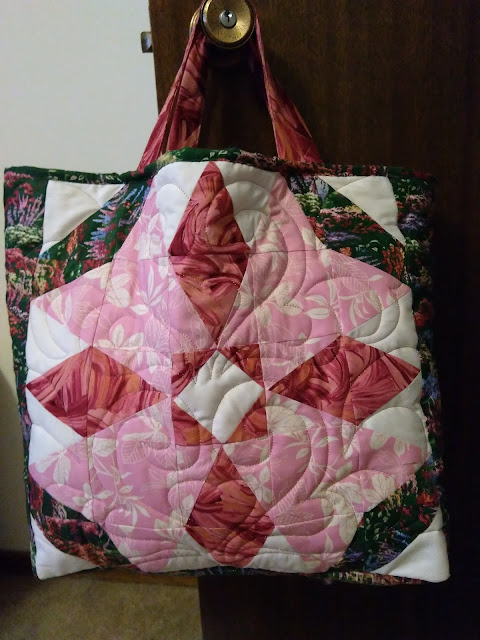 I had to take a picture of each side, since they were different. 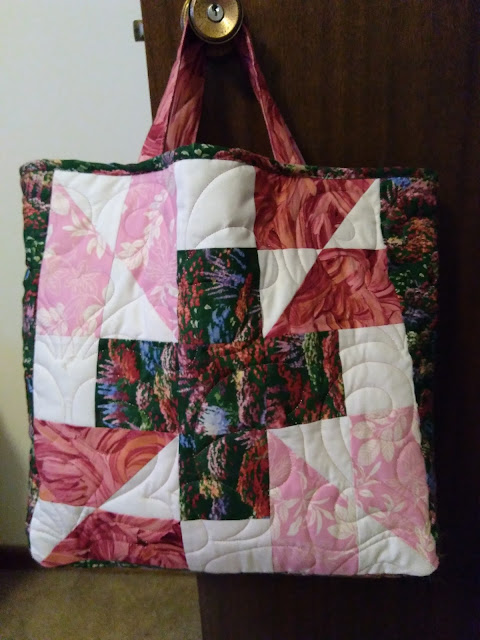 Meanwhile, I took both Janomes in for servicing and was told it would be 4 weeks! 😞 Oh no! So I bought a ¼" foot for the Singer as I was getting tired of trying to approximate seams. And I went back to working on the Arabian Star block, determined to make it into a table topper. As I mentioned, it wasn't lying flat. I was able to remedy that by taking the seams in a little. Then I added the background, then worked on the borders. That was pretty disastrous as I did them on more than one machine - one which was making the seams too wide and another which was making the seams too narrow.
Rippling, puckering seams notwithstanding, I determined to load it on the longarm and see what transpired. 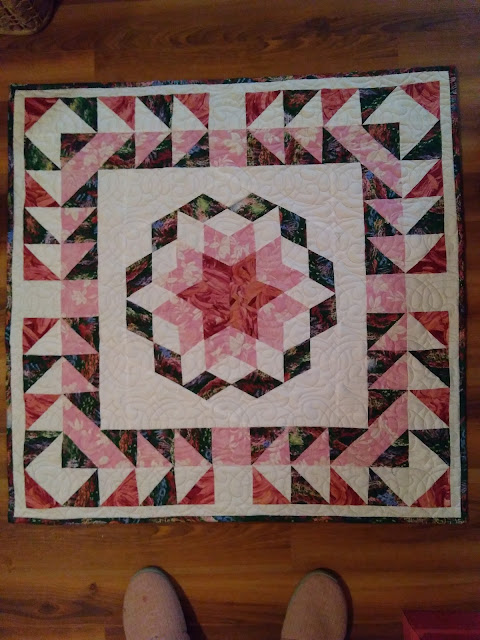 This! This is what transpired. And while a more OCD quilter than me might not be satisfied with it because it most definitely is not perfect, I'm reasonably happy with it. 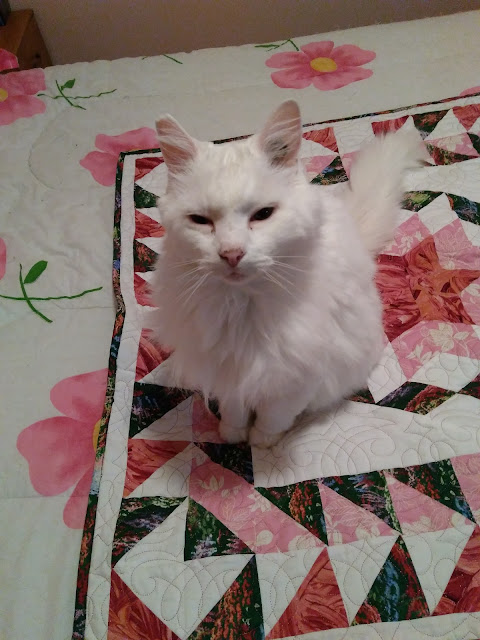 And it's already been cat-tested and approved by Mystery. 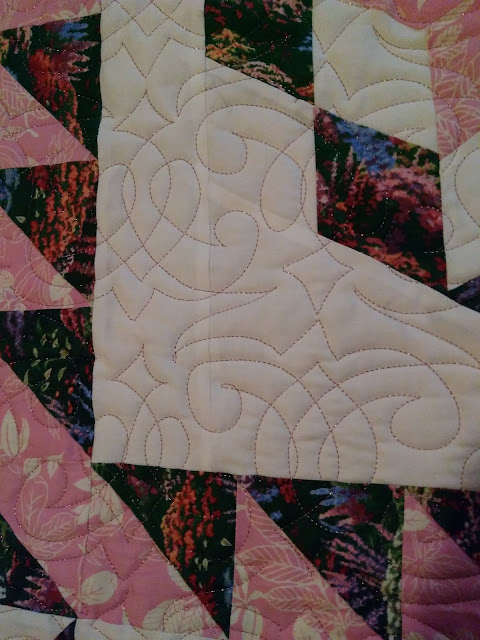 Here's a close up of the quilting. This was a project that would have really benefitted from free motion quilting. But I still haven't mastered that art yet. And I'm not sure I will ever have the time or patience to do so. However, I did want a smaller, more dense design. Looking through my pantograph library, I finally chose Simply Elegant from Willow Leaf Studio, and used the same threads that I used for the tote bag.
This table topper measures approximately 36" square. It will be my niece's Christmas present.