My True Love Gave to Me: 44 Country Quilting Projects 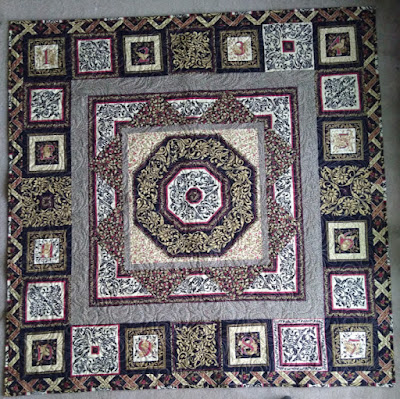 This was a little project that grew. It was supposed to have been the 41" Rose Fever quilt from this book:  It required a 22" panel with an octagon floral motif. I was rather disappointed that it called for a panel, which I didn't have, and didn't give instructions for creating the octagon. But I didn't let that defeat me. As I had been experimenting with kaleidoscope techniques, I decided to use what I'd learned and apply it to an octagon, and purchased some striped fabric. I thought it was kind of odd that the fabric line was called, "My True Love Gave to Me" (Benartex), until I was able to purchase some more fabric from this line and saw the holly prints. Eventually, I also bought the 12 Days of Christmas panel. It most definitely is not traditional Christmas colours.
I created my octagon using 8 - 45° triangles. Voilà! 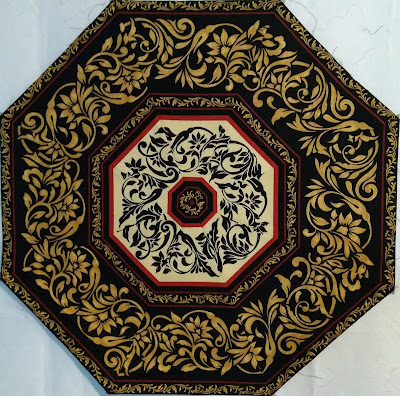 I was impressed, even if I do say so myself. One of my facebook friends was so impressed, he offered to buy it. However, it was only just begun. 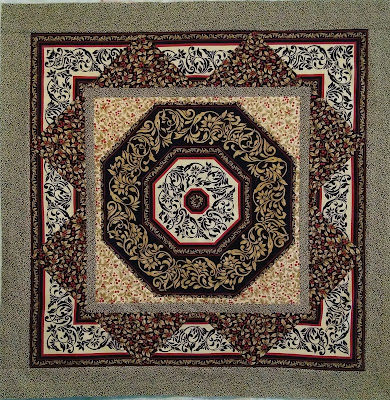 It looks like tiles on a cathedral floor.
This is as far as the instructions in the book took me, aside from quilting and binding. And, as mentioned, it was supposed to be 41". However, before adding the last border, my top was only 35", including seam allowance. The border strips were only 2½" wide. That would make only a 38½" square quilt. And the last 2 border strips, according to the instructions, were supposed to be 39½"! That yields a 39" quilt, not a 41". I have no idea where the extra 2 inches went. And I had actually planned on trimming it down, so that I'd have a 40" finished size. Instead I had to add extra to the border. Hmm, I have not been finding the measurements in this book to be very accurate.
Meanwhile, I used the "gleanings" from the first octagon (6 triangles from between the first triangles, but going in the opposite direction), cut a couple more triangles to match and produced another octagon. 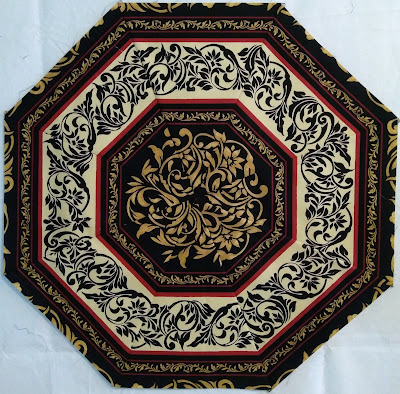 Not really sure what I was going to do with it, but I figured I had enough fabric to at least make a smaller quilt. Back to the first quilt, I decided to separate the panel into the individual squares, add some borders to them to make them 8" square and set them up around the centre, alternating with squares of fabric. However, I decided that I wanted to continue the tile look of the quilt so, instead of just sqares of fabric for the alternate blocks, I scavenged the stripe print and made nearly identical triangles to put together into "tile" blocks. I got this far 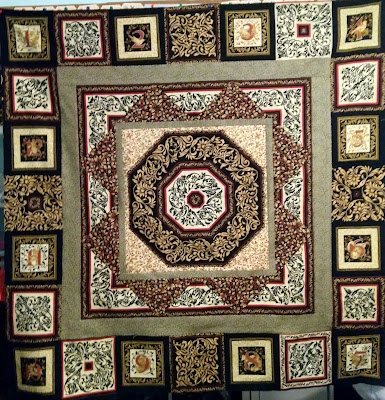 when I realized that I didn't have enough of the right fabric for the final border. The fabrics that I did have enough of didn't look right. So, I decided to see if I could find some online to order. Yes!!! A dealer on Etsy had some on clearance. I had been planning on using a fabric from a different line for the backing, but since I was ordering anyway, I was going to order backing fabric as well.
But before placing my order, I wanted to get as far as I could with the other octagon to see if I should order extra fabric for it as well. Unfortunately, other projects took precedence and these two projects languished in the UFO pile for at least a couple of years, and I didn't get around to ordering the extra fabric. I did however, find a fabric that I thought would be nearly ideal for the backing. 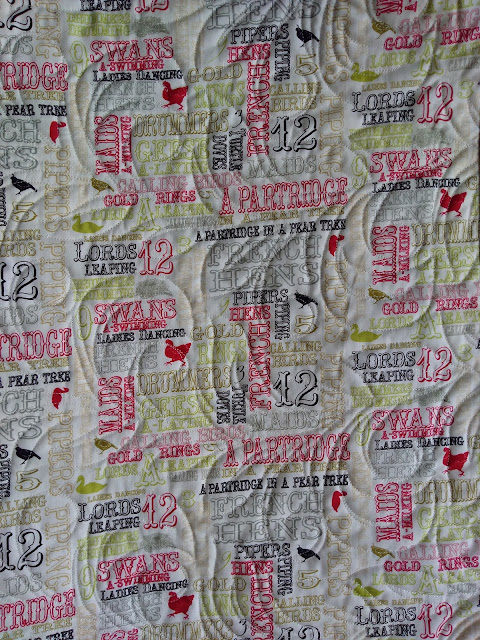 Nearly ideal, as in it is the 12 Days of Christmas and it is in the same colour family. Not so ideal is the fact that this fabric doesn't have the elegance as the that in the quilt top. However, it's just the backing, and so I decided I at least wanted to finish the first one with what fabric I had available. And while I don't consider the lattice fabric the best choice for the final border, it still looks good. It's twin will have to wait until I know how I'm going to finish it and whether or not I will be able to find any coordinating fabric, or just end up with a wallhanging.

In quilting this quilt, I had originally planned on using the Christmas Holly pantograph, but decided I wanted something with a little more elegance. So I picked Central Park West by Patricia Ritter from Urban Elementz. This is definitely not a beginner pantograph - lots of points and tips and fairly dense quilting - you have to really pay attention to the pantograph in order to avoid skipping to a different line where the lines run close together.
Another UFO finished! And I do hope for this to be the beginning of a series of quilts based on the 12 Days of Christmas: The 12 Quilts of Christmas. Except that there will likely be more than 12: one for each day in the song, plus one or more, like this one, around the general theme of the song.