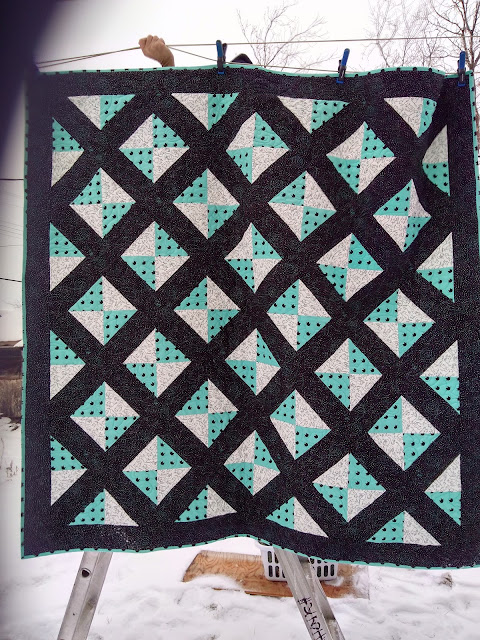 I bought this quilt as a kit during the Sew Sisters Stuff Your Stocking event last year. At the time, I didn't have specific plans for it, but the price was right. This year I found out that the sister of my best friend from high school had died of ALS. In lieu of flowers, I decided to give her something of more lasting - and comforting - value. The quilt was actually called "Best Wishes," but I hardly considered that appropriate for a sympathy gift, so instead renamed it Cat's Comfort. She, like me, is a cat lover, but can't have them because of allergies. While you can't tell from the picture above, the teal fabric has cat head silhouettes on it, and the white fabric has line drawings of cats.
When I purchased this kit, I assumed it was hourglass blocks with a wide black sashing. No! This is what the block was actually supposed to be: cut a large square of the black fabric and smaller squares of the white and teal fabrics and sew them on the diagonal on opposite corners of the black square. Then trim off the excess. 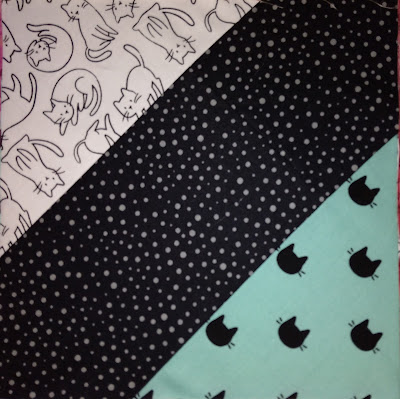 I hate wasting fabric, and that was wasting a LOT of fabric. So, I decided to do the hourglass blocks instead. And it's a good thing I'm good at math because I had to do a lot of calculating - not only the size of the hourglass block, but how wide and how long the sashing needed to be. My quilt ended up a little bigger than the dimensions stated on the kit, but I still had a generous amount of fabric left over, which is good because I also bought a jelly roll in the Meow fabric line. 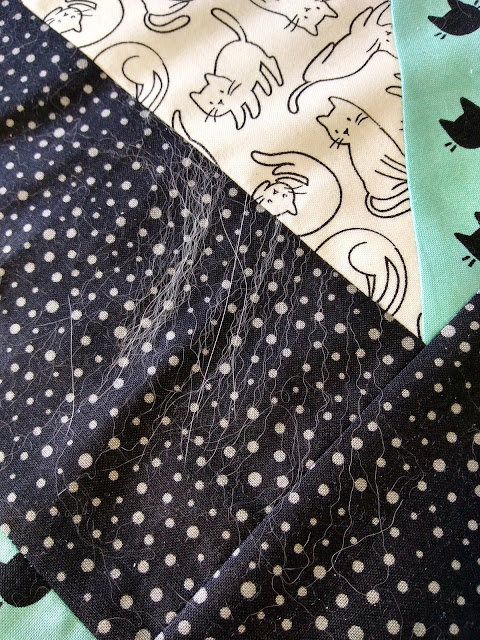 Mystery had to try out the quilt while it was on the longarm - you can see his calling card in the above picture. 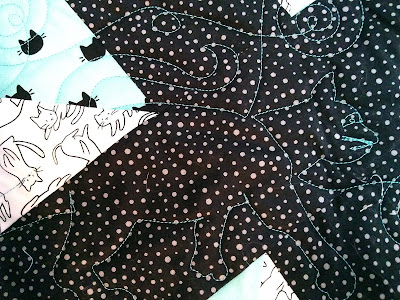 I quilted it using a Marathon thread, with good success. That was my first time trying Marathon and I'm happy with the price and the performance. The pantograph is Quilting for Pawz - Catz by Patricia Ritter from Urban Elementz. Isn't it awesome? I could never hope to do this freehand with the longarm. I doubt I could even do it freehand with a pencil! That's one of the things I really love about pantographs - being able to quilt something appropriate to the theme of the quilt that I would not be able to do otherwise.
Unfortunately, this quilt took a back seat to Audacious and I didn't get the binding done until mid-December and wasn't able to get it into the mail in a timely fashion. The recipient goes to Mexico every year for the month of January, and I don't want to send it until I know that she's back home. So, I will await mailing it until her return.
Posted by Laura B at 12:43