When my youngest sister, Cindy, was quite small, she received a stuffed corduroy chicken as a gift. She promptly said it was ugly. Later when I asked her what she was going to call it, she said, "Bodley." Or at least that's what I thought she said. What she had actually said was "Ugly." But Bodley it was, and Bodley it remained.
A couple of years ago, I thought I might make some quilts for the Bags of Love program and purchased a few quilt kits from the clearance section at Keepsake Quilting. However, I have a habit of thinking I can accomplish more than is realistically possible, and life intervened and I never did get involved in this program. Earlier this year, I wanted to start a new quilt and pulled out the Garden Walk quilt kit. The picture had looked reasonably nice online, but when I pulled the fabric out of the package, I thought it looked like it was left over from the late 60s/early 70s. It was cringe-worthy! I'm not a big fan of scrappy quilts, but at least if the fabric is pretty, the quilt might be tolerable. But this was a scrappy quilt using ugly fabric. Am I being too harsh? Well, remember this is just my opinion. And obviously some people must like this kind of fabric or it wouldn't be made. Different strokes for different folks, right? But it definitely isn't my taste. I found it hard to motivate myself to actually work on this quilt.
As I was working on it, I couldn't help but wonder why it was called Garden Walk. I recognized that the blocks look like tiles that you might use in a walkway, but a walkway is not one big rectangle. I thought maybe it should be called Garden Patio instead. And then I got to thinking how I would make a Garden Walk quilt, using some Stonehenge fabric to make the tiles actually look like they were made from stone and having them meander through the quilt between blocks of floral fabric. Alas I was stuck using Penelope from Camelot Fabrics. And this is not a reflection on Camelot Fabrics, because they have some nice stuff. It's just that I don't particularly care for this fabric line. I kept looking at that "Camelot" on the selvedges and thinking how I should use that in the name of the quilt. King Arthur's Tiles? No, hopefully King Arthur wouldn't have such gaudy pink tiles. I googled because I really didn't know much of the Camelot story and found out that Queen Guinevere had cheated on King Arthur with his most trusted knight, Lancelot, inciting Arthur to go to war with Lancelot, which resulted in Arthur's death. I considered calling this quilt Lancelot's Tiles, but decided that conniving, manipulating adulteress deserved to have them named after her. And so this quilt became Queen Guinevere's Tiles. That's the title I put on the back. But to me it will always be the Bodley Quilt. Because Bodley it is and Bodley it will remain. 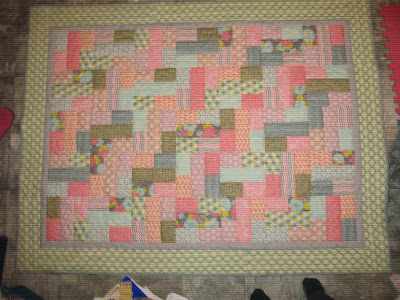 Using all of the fabric in the quilt construction, I discovered that I had 5 extra blocks. I used 4 to make a pillow pocket to turn this into a quillow. 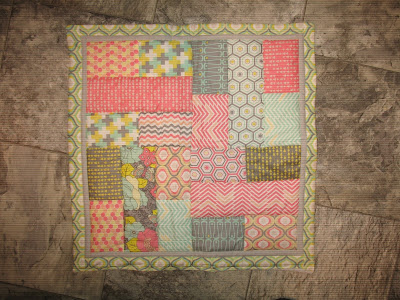 And the 5th I used to make a decorative pillow.
I decided I wanted to emphasize the tile-look of these blocks, and so used stitch in the ditch to outline each rectangle on my domestic machine. Then I followed the design in the fabric to quilt the border. Of course, that took much longer than doing it on the long arm and that meant I had that much longer to look at this quilt. I am so glad to have it finished and given away. This is the only quilt I've ever made that I felt this negative about. Unfortunately, I have at least one more "Bodley" quilt kit in my stash. But I have plans to remedy that one and make it more tolerable. Stay tuned...
Posted by Laura B at 21:00