Back to My Purple Christmas Tree Skirt

I'm not sure when I started collecting purple Christmas tree decorations, but my goal was to have a white tree with purple decorations. Eventually I had enough decorations, but not the tree. One day in the post-Christmas sales in Canadian Tire, I found a frosted green tree that was on for a reasonable price. Since I had not been able to find a white one, I figured that might do and purchased it for use the following Christmas. It did look nice, 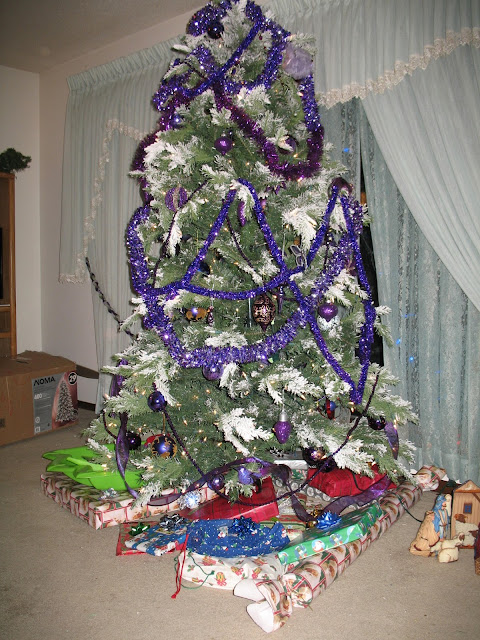 but that horrible flocking crumbled off the branches and got everywhere. It stuck to my slacks, it stuck to the cats. And I figured if I kept the tree for very many years, it would eventually be just a regular green tree, having lost all of its white flocking.
The second year I used it more flocking, of course, came off, but my daughter and I both had terrible allergic reactions. Initially, we couldn't figure out what we were reacting to, especially since I don't rember reacting to the tree the first year I used it. But then I googled and found out that the flocking on these trees is an allergen. And I suppose time and/or exposure to air had deteriorated it to the point where more allergen was available to react to. Within 24-48 hours, we were fine, I assume because we were no longer disturbing the tree. However, it certainly gave use both cause for concern.
That was last Christmas. This year I bought a white tree at Walmart. It's definitely not a luxury model, but who needs to pay hundreds of dollars on a Christmas tree? And I sold the allergen tree.
Anyway, in collecting my purple decorations, I discovered that it was very difficult to find a purple tree skirt. So I determined to make my own. I started a few years ago, but other projects crowded it out as it was less important. But this year I am determined to have that purple tree skirt under my white tree. Here's my progress so far:

It's called Log Cabin Courthouse Christmas Tree Skirt. You can't even find it online any more, and no wonder. It's not much of a pattern. I had to calculate the fabric requirements myself. The cutting instructions are for one block only and the other directions are pretty scanty. And it doesn't tell you how to make allowance for the tree trunk in the centre. I chose to add the setting triangles as I really didn't like the stairstep effect without them. There will be a total of 24 blocks and 8 setting triangles. It will be an uneven octagon when it's done.
The biggest mistake I made was that I chose to include the shiny purplish fabric. It's not cotton, frays very easily and gets stretched out of shape much worse than cotton on the  bias. So my squares are pretty wonky. But it is only a Christmas tree skirt after all, and will be covered by presents for at least part of the season.
Posted by Laura B at 20:56