Got snow yesterday and overnight, but it didn't amount to much. However, I didn't get out the snowblower or even a broom. I was determined to get Damian's bed and some other stuff of my daughter's over to my ex-husband's place, where she's now living. Though I bought the bed, it was specifically for Damian - a nice low height for a preschooler and I don't need another bed around my house. I have a queen for myself, plus a double and two twins (day bed and pop-up bed under the daybed) for guests, so I wanted the extra bed out of my house. There's still a lot of her and Damian's stuff here that I will need to haul there, but it's a start. I'd like to get it all out soon, so I can move rooms back the way they were before Sophia and Damian lived with me, tidy up, clean up and decorate for Christmas.
So after rounding up all of the stuff I rounded up, loading it up on the pickup truck and hauling it to my ex's place and unloading it again, I knew I wouldn't have the reserve time or energy to do the snow. I think I'll get myself a new push broom. It's not much snow so not worth getting the snowblower out, but a little heavy to use the leafblower.
With that all to do today, plus a phone call with one of my sisters, I have yet to do any crafting. Or cooking, for that matter. However, I did get some more work done on my tree skirt last evening. 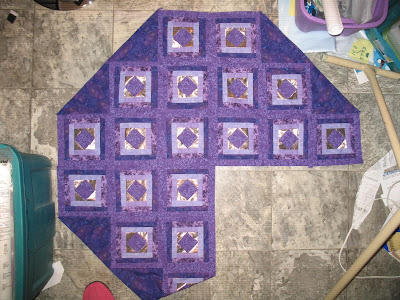 It's almost there. I found my sewing machine needles for using with metallic thread as I want to use a metallic purple for the quilting part. I think I have some purple metallic thread somewhere.
I also watched my first Christmas movie of the season last night: Christmas at Castlebury Hall.
This has become my favourite Christmas movie. It's a light-hearted romance with a feel-good story line. Movies like It's a Wonderful Life and A Christmas Carol have good messages, but the storylines are kind of dark and heavy for a Christmas movie, in my opinion. Holiday Inn I don't particularly care for at all. The deceit and manipulation don't sit well with me. Of course I like Rudolf the Red-Nosed Reindeer and The Grinch that Stole Christmas (original animated version). They're always fun and also have good messages, but of course are geared to the younger audience. Just saw the newer version of The Grinch and wasn't too impressed - oh, I watched that before Castlebury Hall, so I guess that was my first this season. Have no desire to see it again next year. There are others I enjoy watching, but for all around favourite, it's Castlebury Hall. If you haven't seen it, check it out.

This morning I spread the Bluenose II quilt top on my bed and snapped a photo to post on facebook so that Cindy could see what her quilt is going to look like. 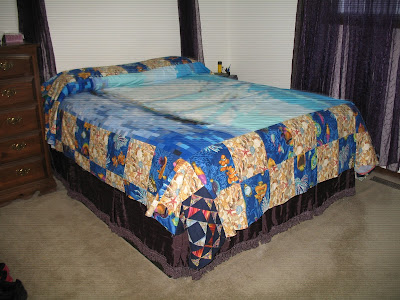 I like it, but I'm thinking it would look much better with a blue bedskirt than with my purple one. 😊
Now I'm going to be lazy and have a toasted tomato sandwich for supper. If my avocadoes are ripe, I'll add avocado as well.
Posted by Laura B at 17:08