Wild Mustangs of the Painted Desert

This past week has been a pretty intense week. Sunday, I had great plans for catching up at home. Since I work full-time Monday to Friday and Sabbath (Saturday) is my day of rest, Sunday is my day for everything else. Monday was my scheduled day off and I had booked time at Sparrow Studioz to long arm this quilt. One of the things I had to do on Sunday was get the backing and batting ready as well as iron the quilt top. Once I got started on that, I decided to see if I could try to finish the Law School quilt as well so that I could quilt it on the long arm after the Mustang quilt since I was making the trip into the city anyway. I did manage to finish it, but that took me almost until bedtime. So much for catching up at home. On Monday, I did the two quilts on the long arm, stopped off at Fabricland to pick up some bright green batik for binding the law school quilt and headed home. The evening was spent trimming the excess batting and backing off both quilts. On Tuesday, I realized I was getting desperately low on cat food, so had to stop off at the grocery store to replenish the food supply for the Quilt Inspectors. Got started on the binding on the Mustang quilt and then went to my acrylic painting class. I had to take off work in the middle of the day on Wednesday to take Mystery in to the vet's for his follow-up appointment for the eye infection he was diagnosed with last week. Yippee! No more eye infection, and no more eye drops! I'd been giving him eye drops twice a day for a week and giving him treats after each treatment. Of course, Tinker usually showed up so she'd get treats as well. Which, of course, depleted the treat supply and I had forgotten to buy them Tuesday after work, so had to do it Wednesday. Wednesday evening was the only time I had left to bind both quilts if I wanted to give them to the recipients on Sabbath. The Mustang quilt especially had to be done as the recipients are moving to BC next weekend. So October 4th would be the last time I would see them. Very dear friends who have been like parents to me and it grieves me greatly to have them move away. <sigh> Yes! I was able to finish the binding on both quilts, plus pack up my sewing machine and gather supplies for Thursday's quilting class. On Thursday, I had to leave directly from work to make it to my Machine Quilting class in Edmonton on time. On Friday, I had to leave work early for my last follow up with my hearing aides. I stopped off at Value Village and bought 3 quilting books and at WalMart to buy a salad and a cake for the potluck dinner on Sabbath. Who has time to cook? On Sabbath, I gave this quilt to my friends Bob and Neva. And had a good cry. And gave the Law School quilt to the grandmother of the recipient, but I'll tell you more about that one in a separate post.
This quilt is based on a free pattern, Wild Horses, available from Quilting Treasures, though only the border print in my quilt is Quilting Treasures Fabric. The remainder is from Windham Fabrics. The horse print is from the Sierra Trail line and the rest of it is from the Painted Desert line. 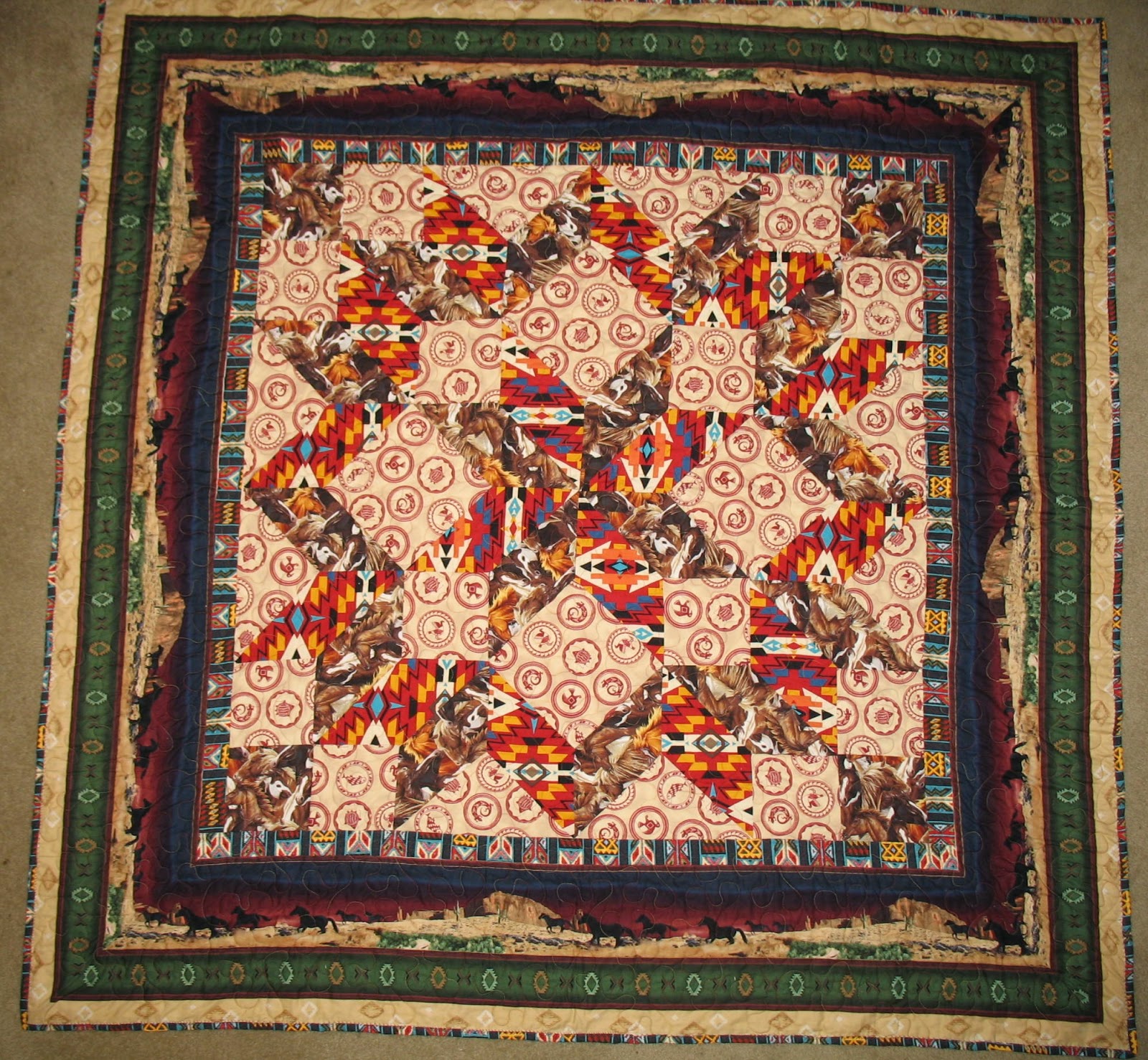 My local quilt shop had the Painted Desert fabric on sale. I love the southwest, Navajo style prints and I was looking for a project to use it in. Though I did use the red fabric as backing for the Blue and Cream Pinwheel Quilt, I wanted to be able to showcase it on the front of a quilt. I bought the horse print separately for another project and never ended up using it. Then I found the horse border print. I tried googling all three of these fabrics to see what I could find for a pattern. And that's when I found the Wild Horses pattern and decided that's what I would use the Painted Desert fabric in. Bob and Neva are both horse-lovers, so when I found out they were moving away, I knew this had to be their quilt.
When I use a large print fabric, as I have in this quilt, I like to use large pieces in the quilt so that it can really showcase the fabric. So I modified this pattern and instead of using a lot of HST squares, I opted for parallelograms for the star point sections and full squares for the background. And yes, that meant a LOT of Y-seams, but that's okay. I'm not intimidated by Y-seams any more, though I don't plan on doing another quilt with this many. 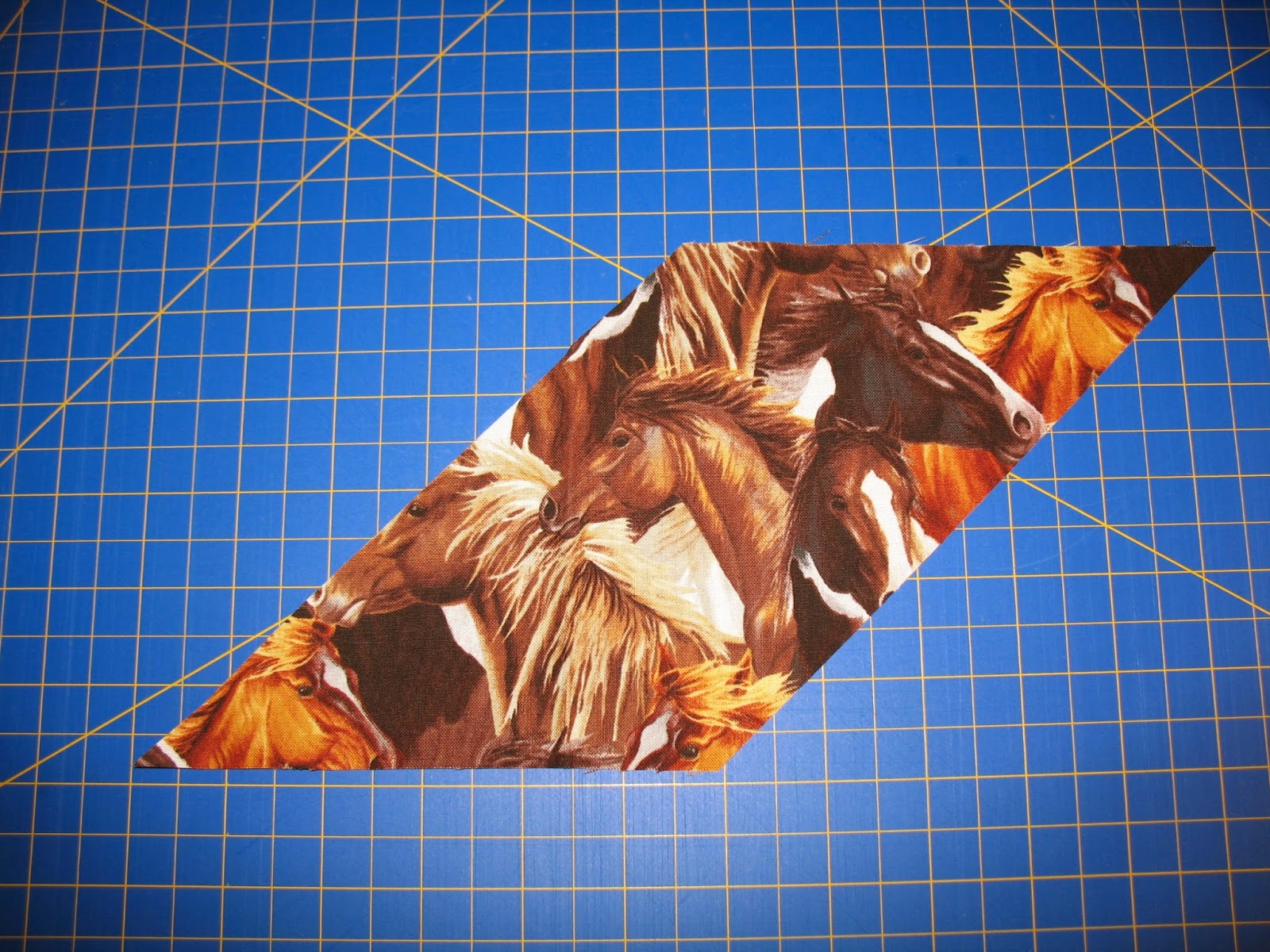 I had to make sure that the parallelograms were leaning in opposite directions for the two fabrics (made that mistake before). If you choose to use my method, you need to cut 5-1/2" fabric strips for these pieces. Then cut 45 degree angles 5-7/8" apart. I chose to use a 5" finshed-size square as the basic unit rather than the 4-3/4" square that the pattern calls for. The four larger squares between the points of the centre star are 7-5/8" and for the triangles along each side, I cut 4 squares 7-7/8" and cut them in half on the diagonal.
I sewed the parallelograms together in pairs. 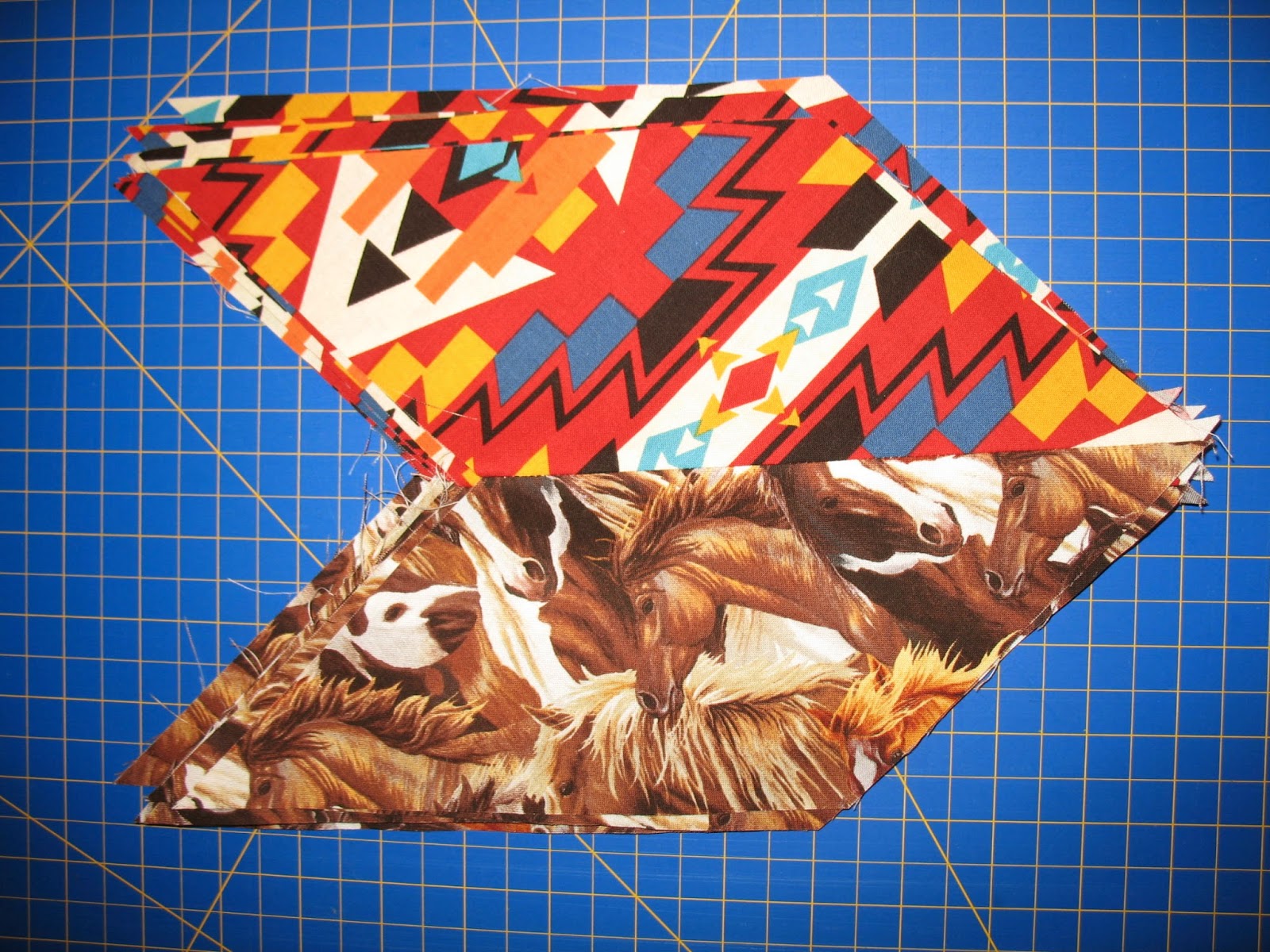 Then I realized that four of the pairs needed to be joined differently than the rest, so had to do some seam-ripping.
I assembled the centre star. 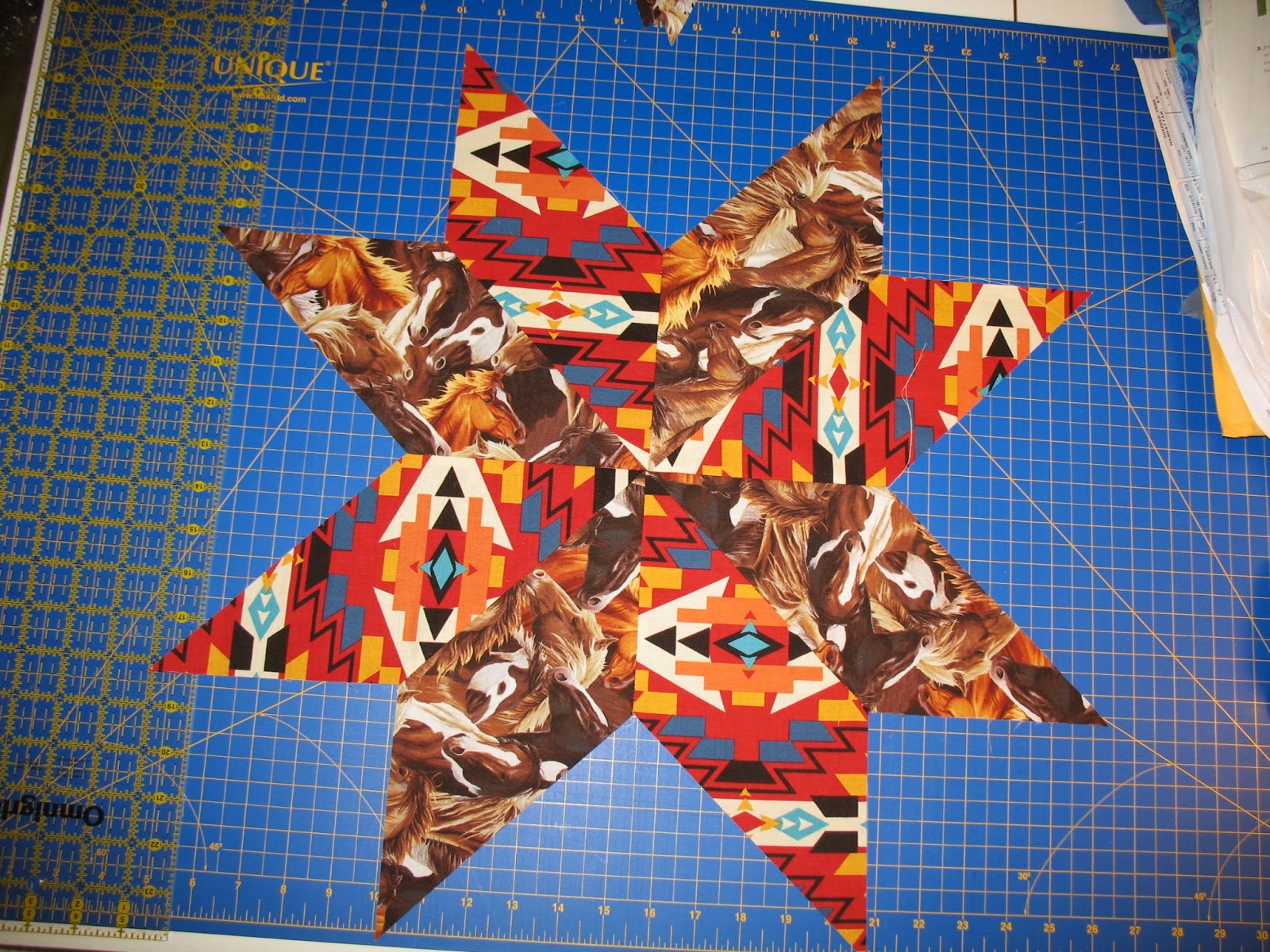 Then attached the background squares. 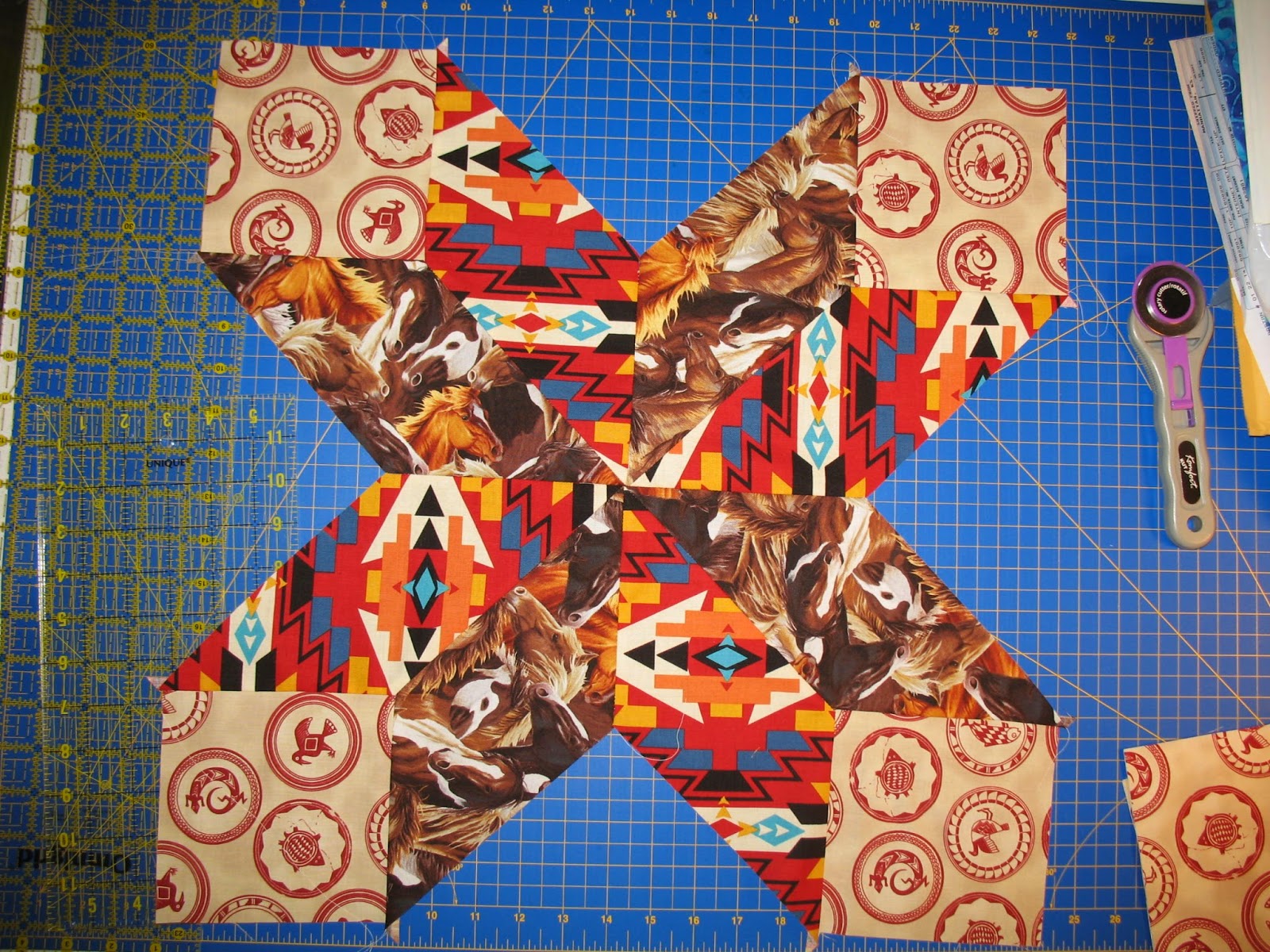 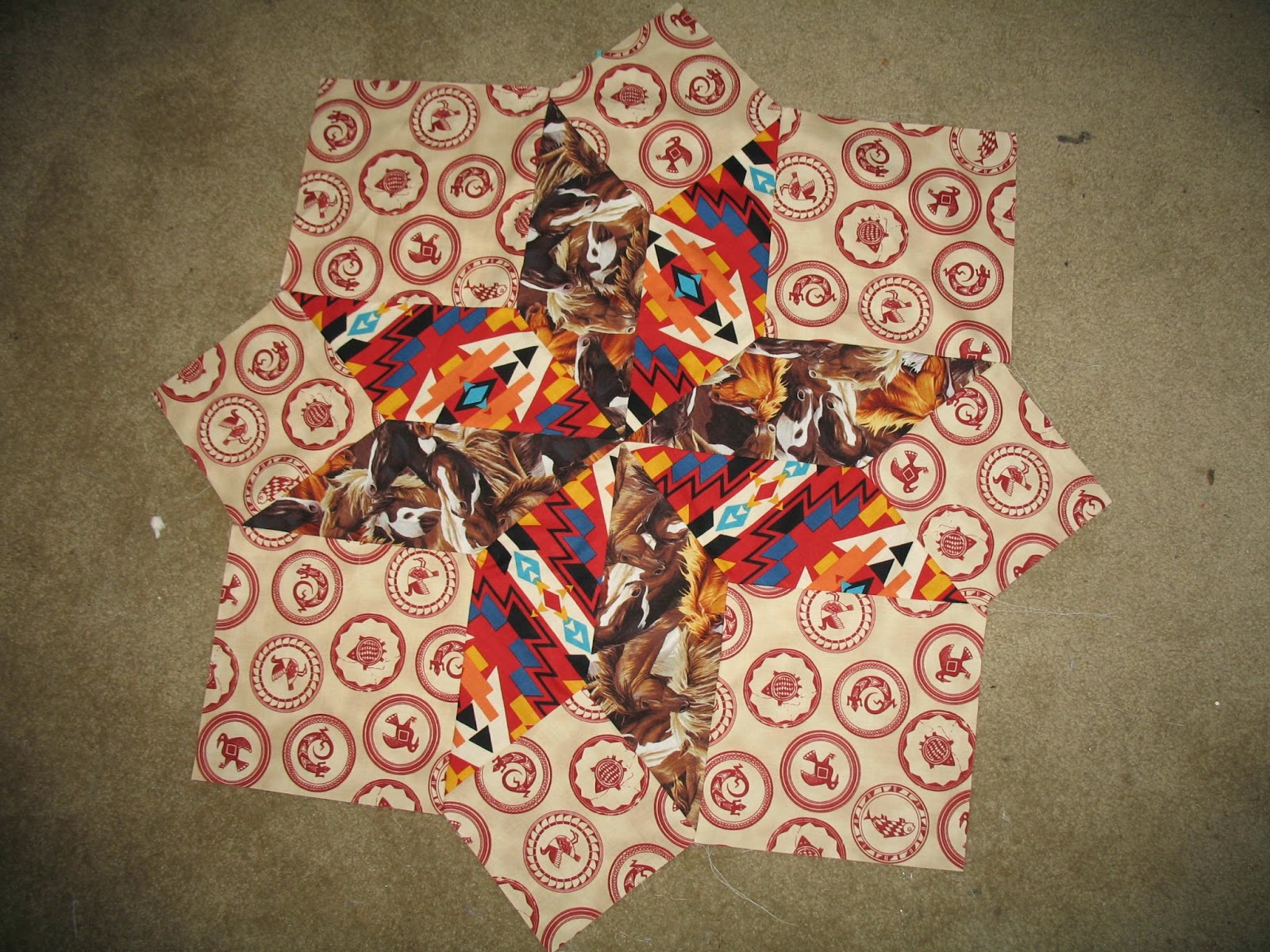 Sewed together and attached the side pairs. 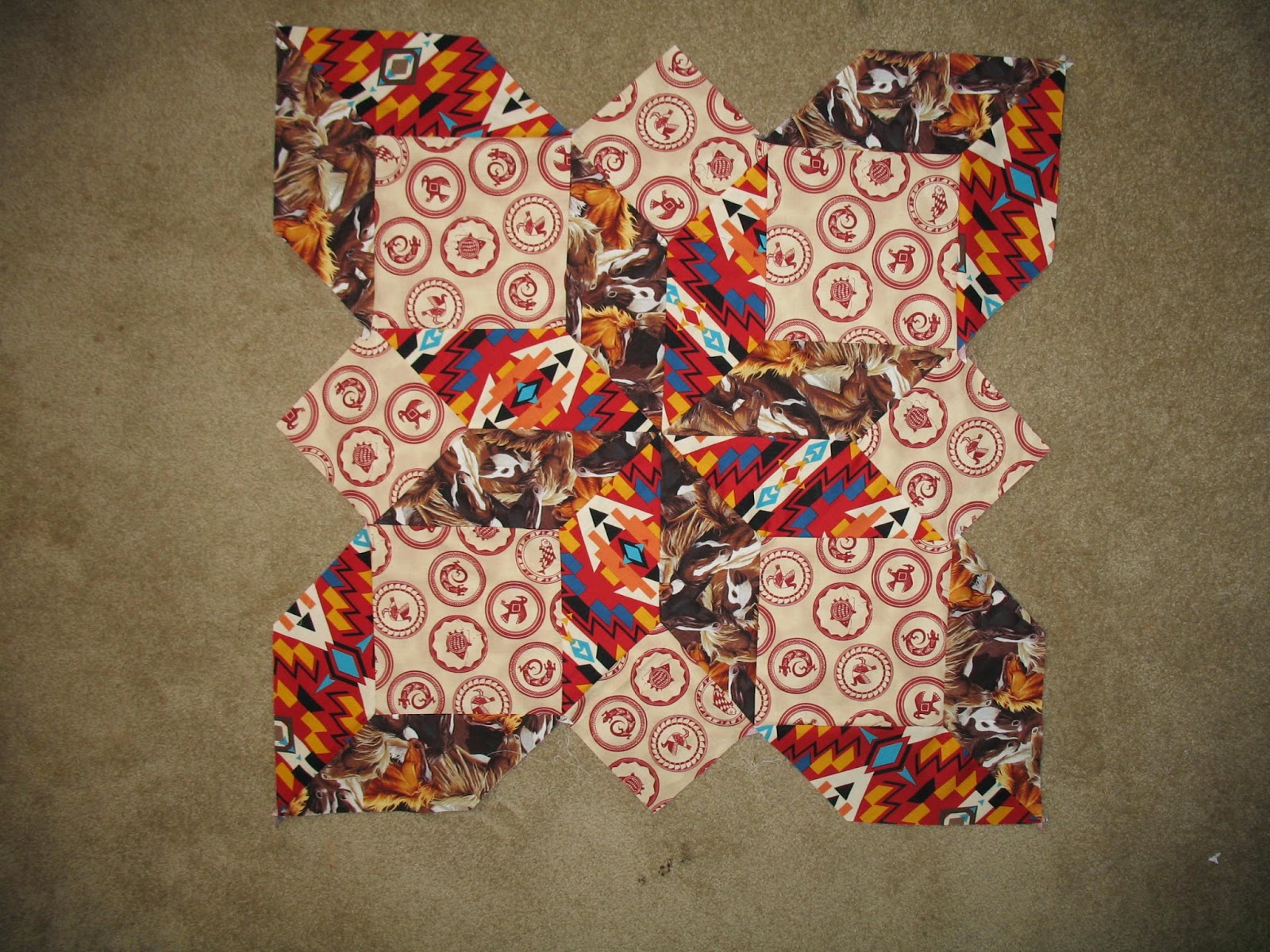 Then worked on the corner units. 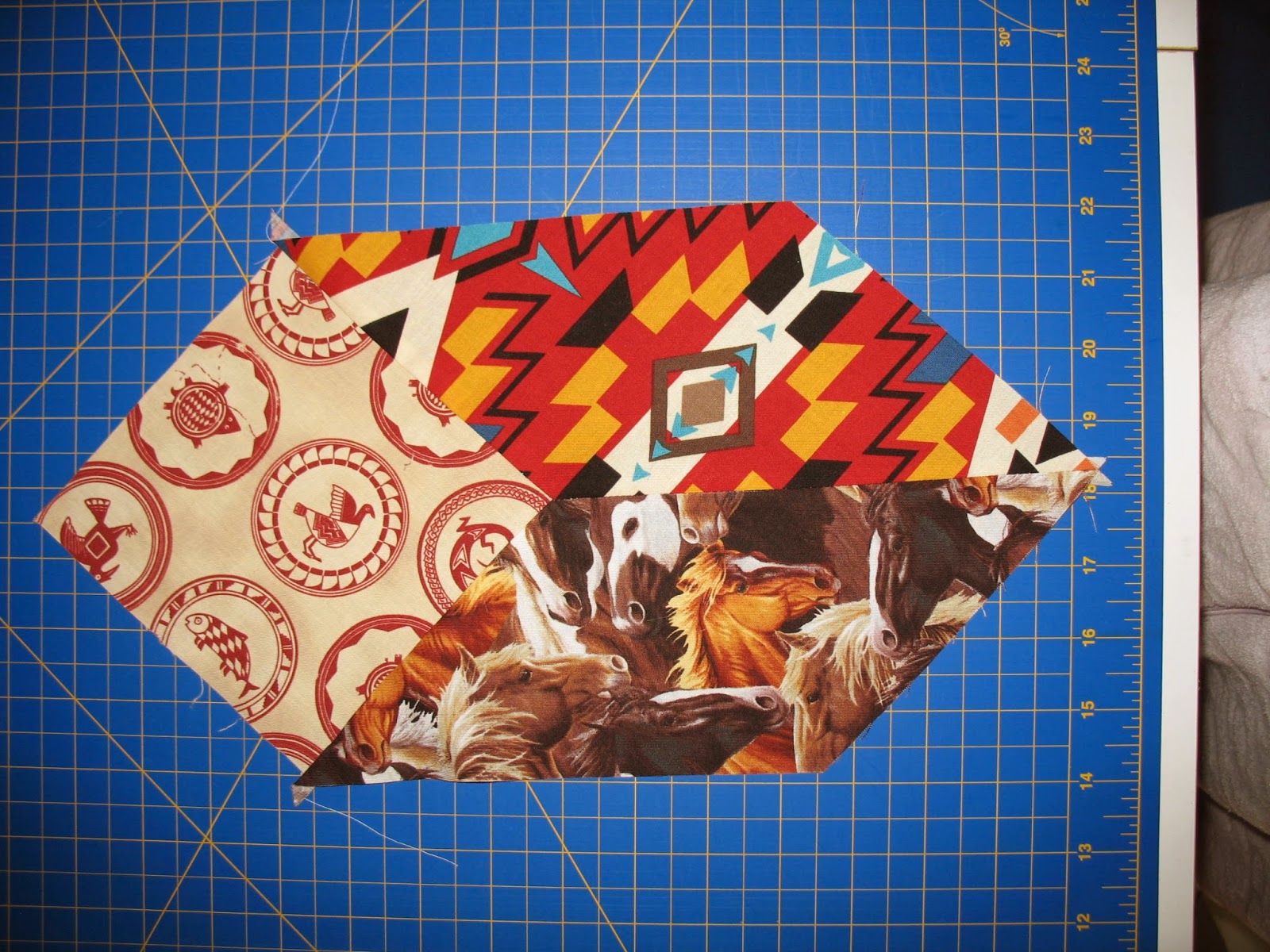 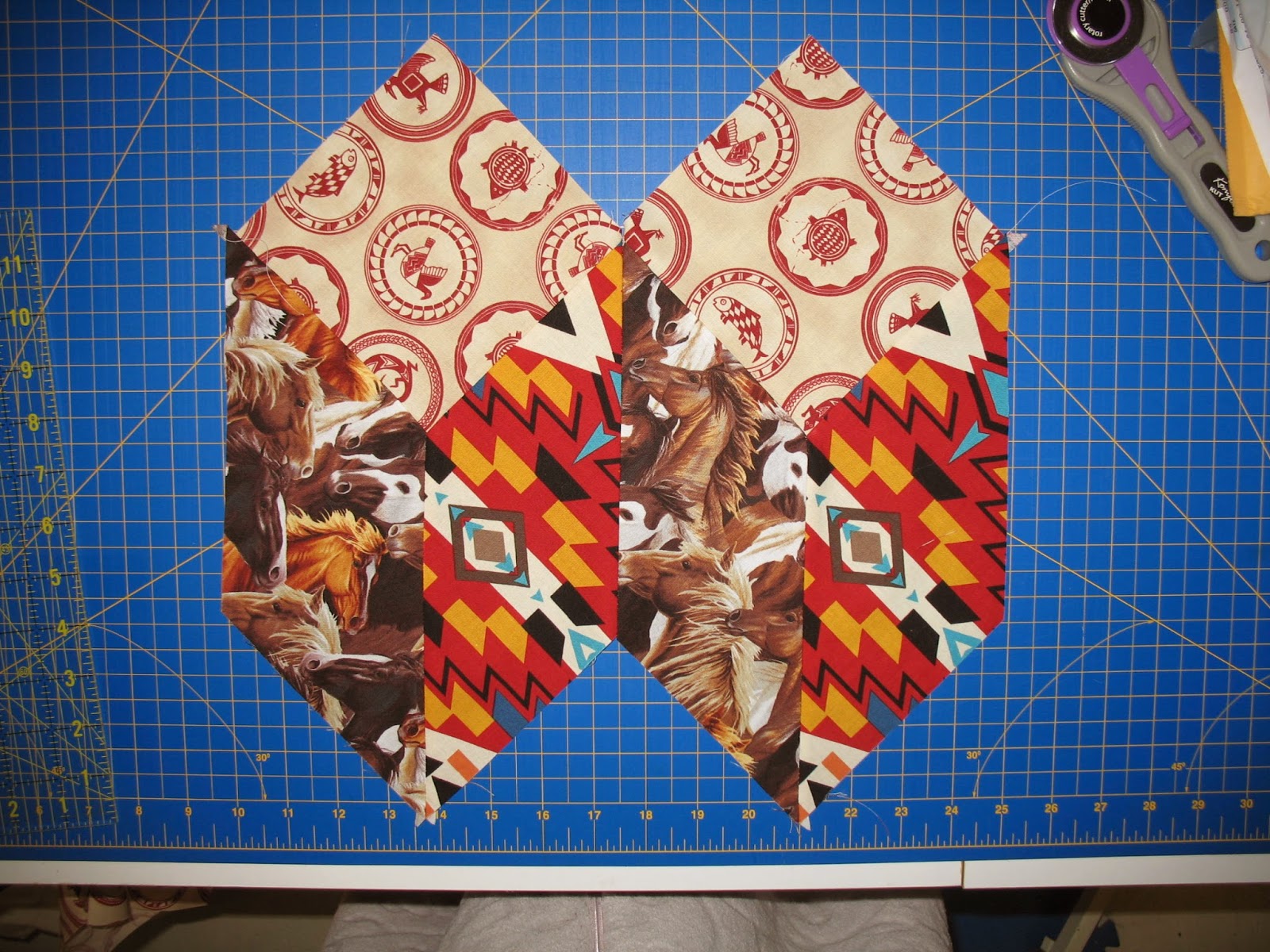 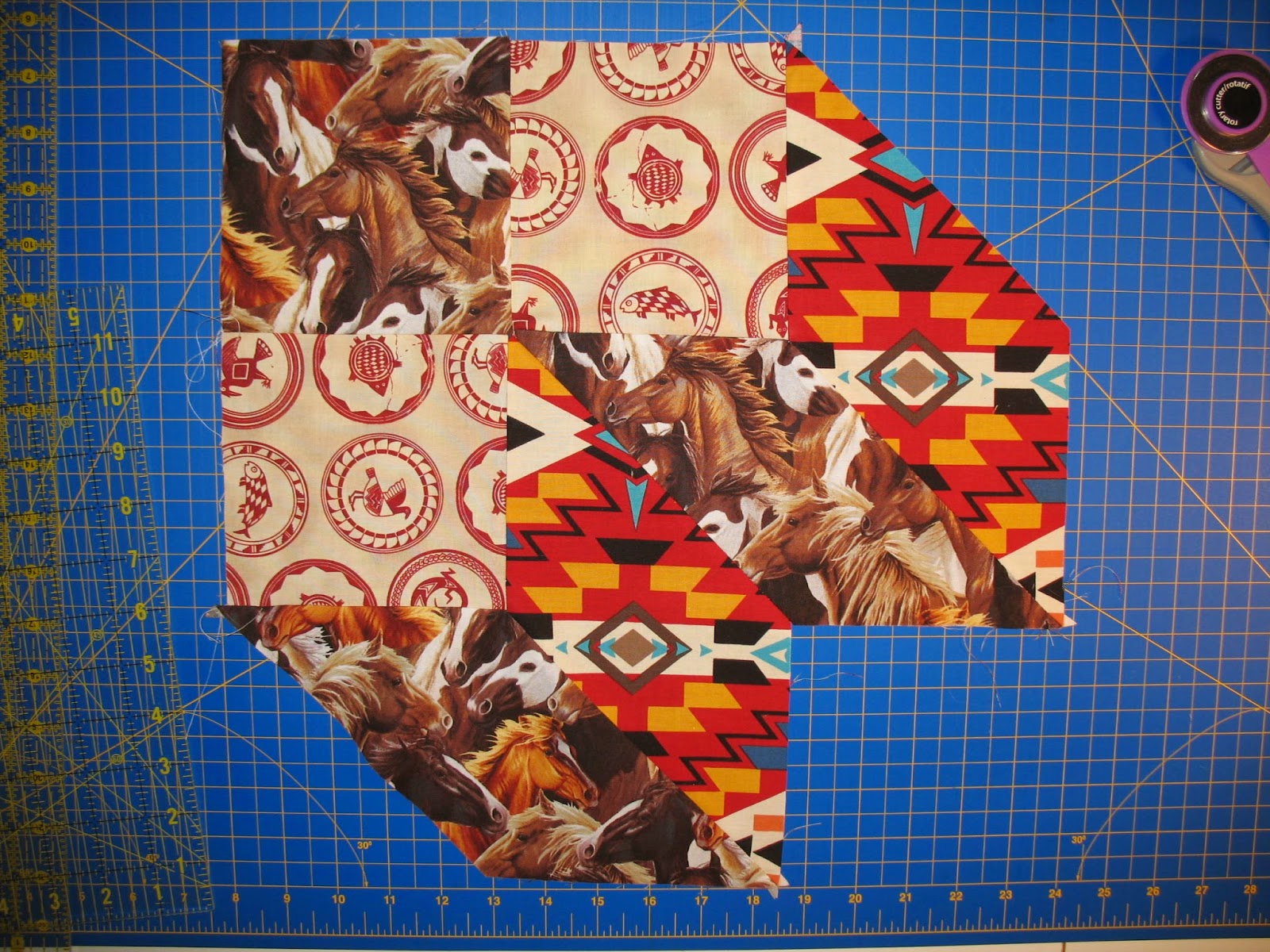 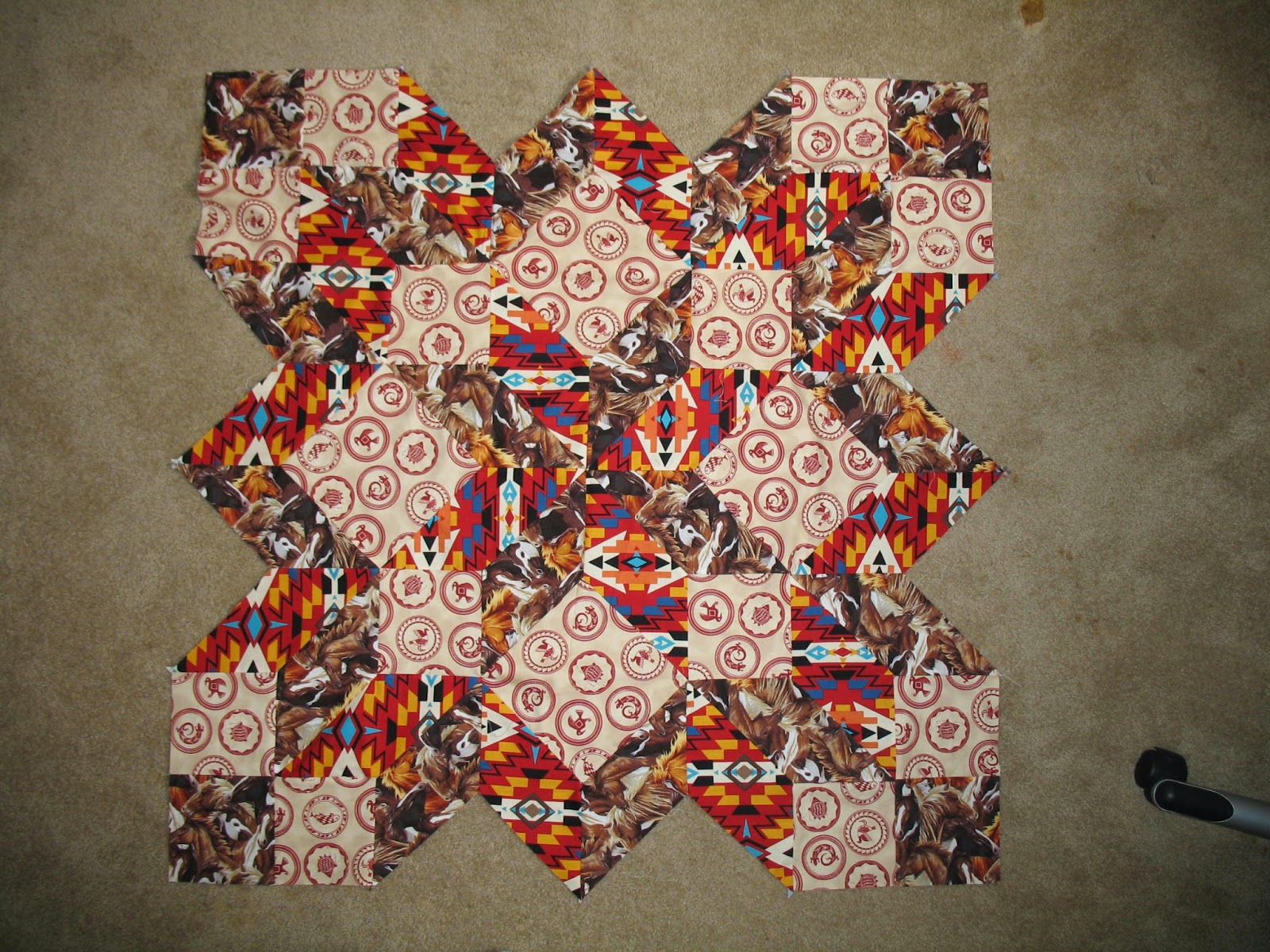 Finally added the side triangles and borders, quilted, binded and voila! 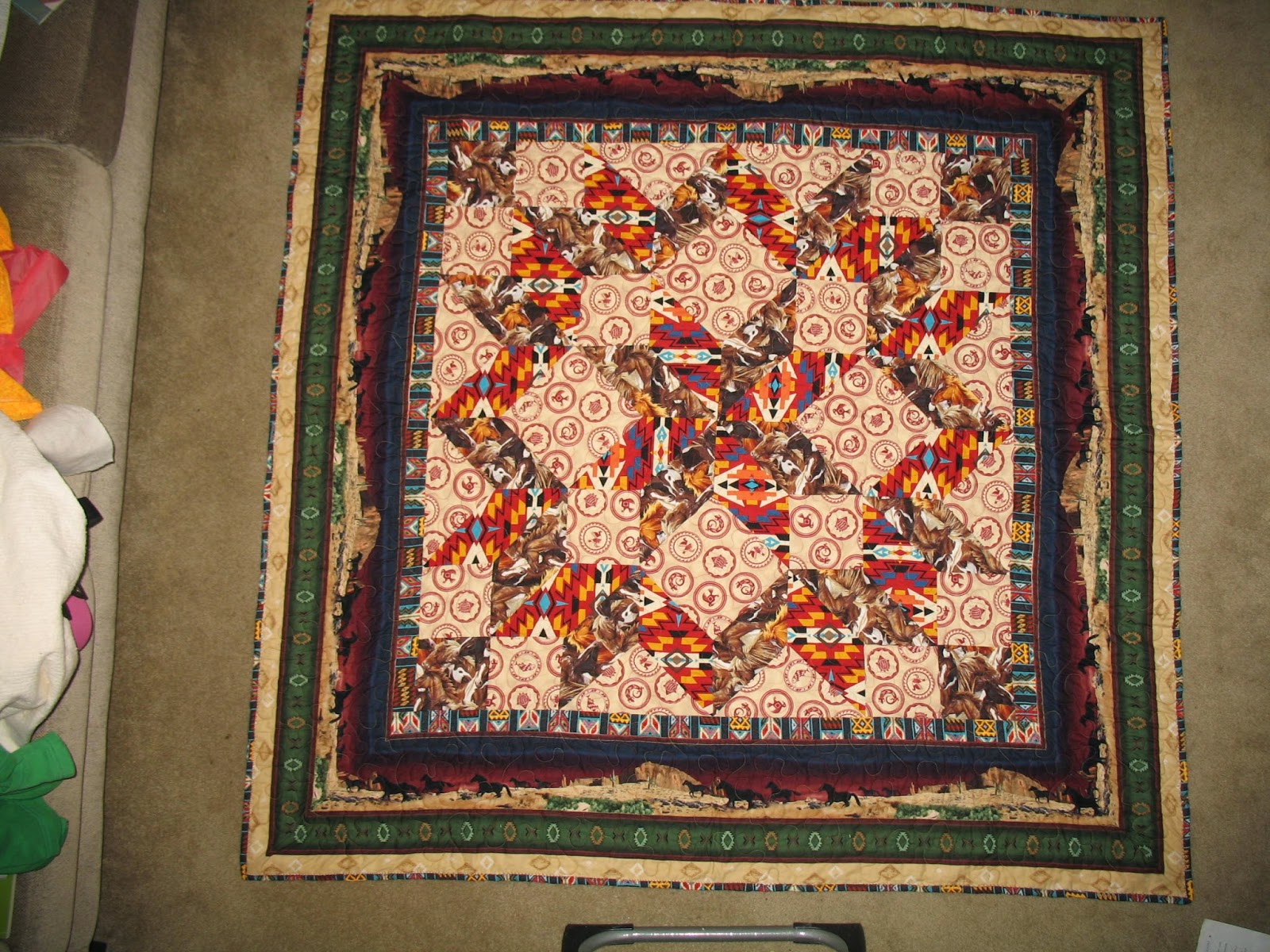 And here's the backing. 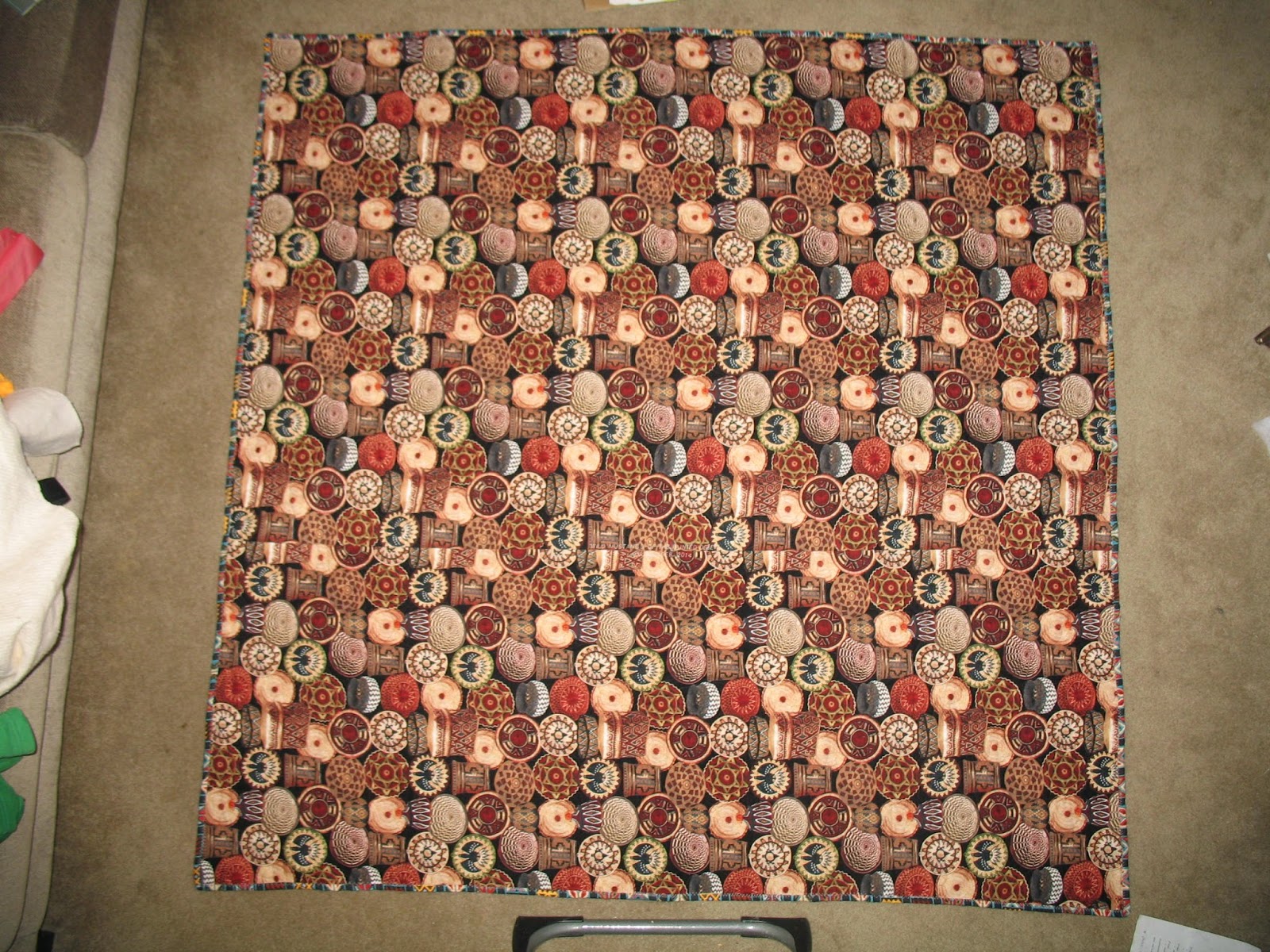 Every quilt is a learning experience and one thing I learned from this quilt is the importance of value. When I selected the fabric for this quilt, I assumed that there was enough difference between the horse print (mostly browns), the red Painted Dessert print (mostly red) and the background print (mostly beige). However, when I assembled the quilt top, I was disappointed that the pattern didn't stand out as distinctly as I would have liked. And it puzzled me. Then I used my Ruby Beholder to look at the quilt top. Both the horse print and the red print came out as medium, with some dark and light parts. The beige is on the darker end of light. So all three fabrics are relatively close in value, and not enough significant contrast in colour to make it work really well. Although I still think it's an attractive quilt, and I'm sure my friends will really appreciate it, I think it could have been a better quilt with greater contrast in value.
Oh, and by the way, I really don't know if there are any mustangs in the Painted Desert, but it sounded good. :-)