It's -29C (-20F) outside right now, with a wind chill of -36C (-33F). Hopefully, this is winter's last hurrah. It was a few degrees warmer when I was out running the snowblower, but my glasses still fogged up and my face had a bit of a "burn" to it when I came inside. I resisted the impulse to lick my lips while outside. They felt very dry and stiff, but I knew if I licked them, they would probably end up frostbitten. As it was, I felt my hands stick slightly to the metal doorknob when I took off my mitten to open the door to the garage. At least I managed to keep my hands warm this time as I wore two pairs of mittens. One pair is never enough. Anyway the snowblowing is done for now, though with my glasses frosted up, it was hard to tell how good of a job I was doing. Dare I hope that that will be the last snowfall this season?
As I was out there working, I suddenly smelled a strange, yet somehow familiar smell. Initially I wondered if something was going wrong with the snowblower. Then I thought maybe it was cigar smoke. Finally I realized what it really was: marijuana! It's been years since I smelled it, so it took a while for me to recognize it. Seriously, someone was out toking in minus 20 something weather??? My daughter had made a run to the store and when she got home, she said that it smelled as strong as if someone had been smoking up right in our driveway. And it did. It reminded me of my first apartment. Prior to moving in, I was not aware that there were a lot of university students living in that building. Sometimes the "pot" smell was so strong that it seemed like someone had been smoking up in my apartment. I thought those days were over. As far as I know, there are no university students living in my neighbourhood. Obviously, there's at least one pot-smoker, however.
Prior to snowblowing, I managed to finish 3 blocks of row 3 on the pixel quilt. When I had most of the pieces of the first two blocks (which again, I worked as one) on the design wall, my daughter took a look at it and said something like, "It almost drives me crazy just looking at it." I don't think a pixel quilt is in her future. <smile> 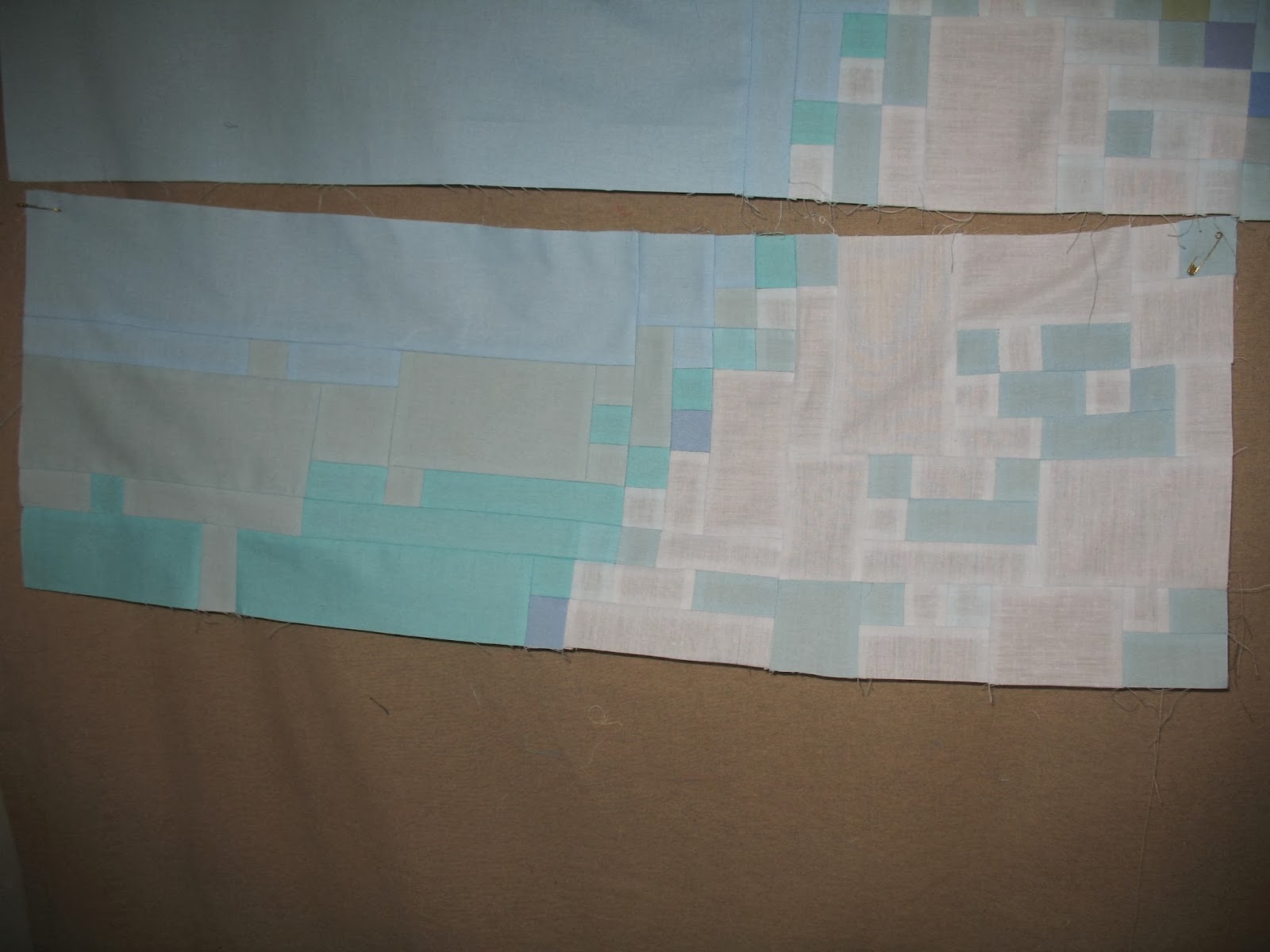 I didn't finish as much of it as I would like. I wanted to get more done during the week, so that I could actually finish a row in one week. <sigh> Sometimes I just don't feel motivated to go downstairs and quilt. And because this one is quite tedious, it takes more motivation than other quilts. I did look through my stash this week and choose some fabrics to use in the corner blocks of the border, but I'll share those later. 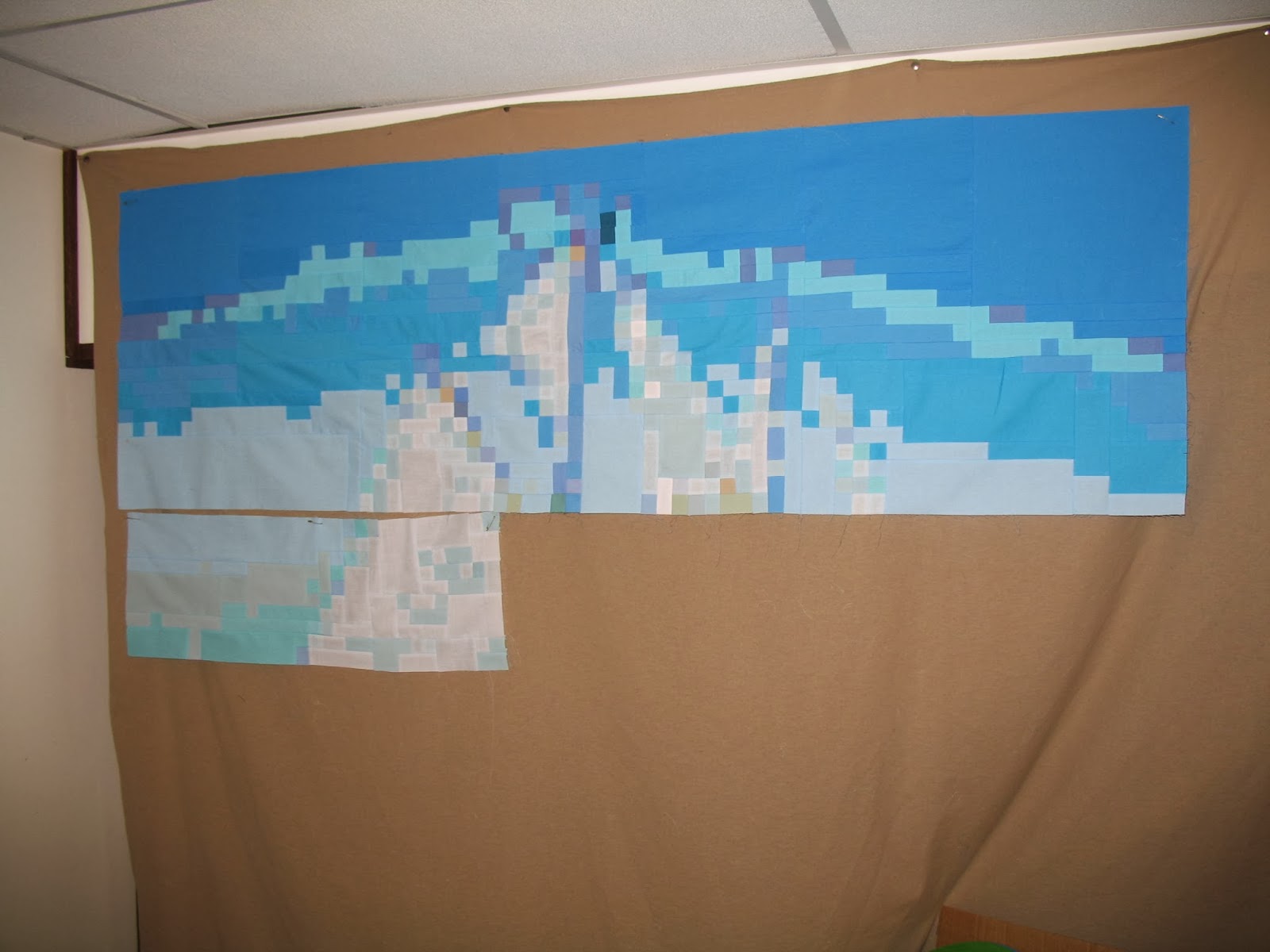 I have to admit that I'm starting to really like how it's looking. You can see the sail on the left developing now. It still amazes me how the bunch of random blocks in the top photo can produce the picture in the bottom photo when you step back to take a look. Once this row is finished, I'll be halfway through the pixel top. And it should look even more like a schooner.
I have been using grey cotton thread for the piecing on this quilt, but I was having problems with the bobbin and not really happy with the colour. So I finally decided to switch bobbins and colours. However, I couldn't find my beige cotton thread. I'm sure it will turn up eventually, but in the moving to the basement process, some items have temporarily disappeared. However, I could find my Superior cones of beige polyester thread that I purchased at the Creative Stitches show last fall. I had purchased them with the intent of using them for machine quilting on my domestic machine. However I have more or less given up on machine quilting at home since I discovered renting a long arm. So why not use them for piecing? I felt almost guilty in doing it, but my Janome really likes it. I'll have to do more research on this topic.
During the sewing process, I somehow managed to knock my scissors flying and, in trying to grab them, I somehow managed to stab my left thumb with them. Ouch! It's quite a gash. A thumb is not a very easy place to keep a bandaid on, so I ended up resorting to New-Skin liquid bandage. Unfortunately, that stung in an open cut.
After coming in from snowblowing, I had a bite to eat and watched a couple of episodes of The Waltons. It's kind of funny, but my not quite 18-month-old grandson has become a real Waltons fan. He will actually sit down and watch it, something he doesn't usually do even with the children's videos we have.
The Winter Olympics are over for another 4 years. While I'm really not a sports fan, I still like to see Team Canada do well. And I'm quite pleased with the results. Especially hockey. I heard that bars here in the West (Alberta and Saskatchewan) were given special licenses to open at 5:00 this morning in order to accommodate the people who wanted to go there to watch The Game, i.e. the men's gold medal hockey game between Canada and Sweden.  I'm not a drinker and have never even been in a bar, but I still think that's pretty funny. I wonder how many people know that before 1994 hockey was not our national sport. Lacrosse was, and continues to be our national summer sport, as of the National Sports of Canada Act, 1994. In that year, ice hockey became our national winter sport. It was about time. Every Canadian recognized hockey as our unofficial national sport. I don't know how many Canadians actually know what lacrosse is. It's not even an Olympic sport, though it was in 1904 & 1908, and Canada won gold both times.
Well, that's enough babbling for now. Time to get to bed. Back to work tomorrow.
Posted by Laura B at 21:04