A brand new day, a brand new week & unfortunately, in Alberta, there's snow on the ground. I already paid someone to shovel for me last Sunday and last night I ran the snowblower. That's snow removal twice already and it's not even Remembrance Day! Remind me again why I live in an almost Arctic climate... <sigh> It could be worse - we've had snow for Thanksgiving before. Canadian Thanksgiving, that is, which is the second Monday in October. And there have been times in winters past when it's been colder here than in Alaska. But it's Show & Tell time, time for all of us to share our projects again. I love getting comments/compliments and I'm sure you do, too. So share your links in order that more people can see your work.
First, it's my turn. I wasn't sure what I was going to share this week. Quiltwise, it's been a pretty productive week for me. I finished the quilt top for my nephew Billy's quilt, but I'm not going to share that yet. Today, I am going into Edmonton to take a class in Long Arm Quilting at Sparrow Studioz, so I'll be taking Billy's quilt to work on. Yay, I'm so excited! Once I take the class, I can then rent time on their machines to finish all my quilts. Anyway, I won't show Billy's quilt until I'm finished it, hopefully next Show & Tell.
However, I was able to finish another block for my daughter's quilt and here it is: 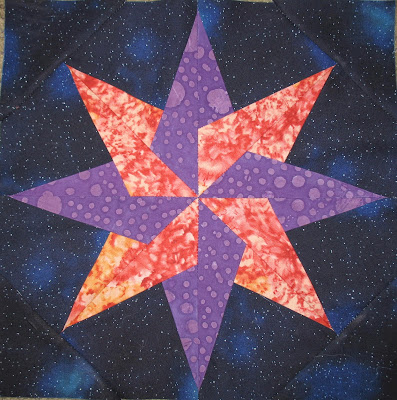 This is the Dreamweaver block from Craftsy's  Quick Strip Paper Piecing Class . I really didn't think I was ever going to try paper piecing, but decided to give this class a try. It's easier than I thought and it does actually work up quite quickly. I've just got so many other projects on the go that this one has taken a backseat. This is only my second block. Here are both of the completed blocks: 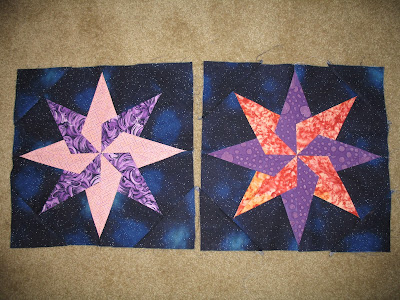 Excuse the ragged appearance of the second block. I haven't trimmed it yet. I had folded up my cutting table to use the floor for cutting and trimming backings and it wasn't convenient to set it up again.
I just love the background fabric I'm using in this quilt. It's called "Space." I don't recall the designer, but I thought it was perfect for these stars.
I'm hoping to have the Dreamweaver quilt done by Christmas time. We'll see...
While I was at my local quilt shop this past week, I found this fabric at 50% off: 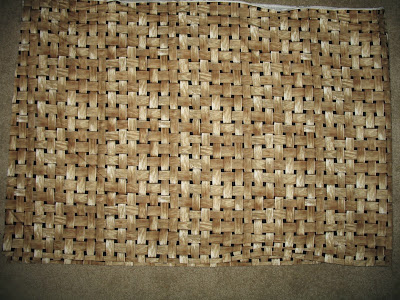 It's called Apple Basket. Here's a closeup, so you can see the detail better: 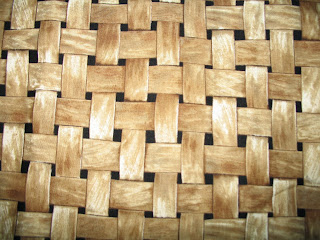 I bought what was left on the bolt - less than 2 metres, I think. I'm hoping to use it in my Crop Circles quilt, but I'm not sure. It might be too large a print. Even so, I will find a use for it as I think it's an awesome fabric.
While I was perusing Windham Fabrics, I found a new fabric line called Farm Stand that will be available 01/01/14. Check these out:

Aren't they delightful? That last one, with the produce in the baskets, would make a wonderful backing for my Crop Circles quilt. I wonder if my Local Quilt Shop will bring it in.
Now it's your turn. Don't forget to either add my link

Cat's Crossing
or my button to your blog.