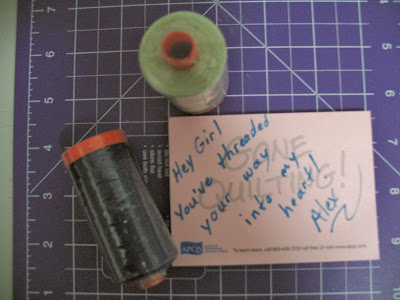 Have you heard of Aurifil's Hey Girl Slogan Game? You'd better check it out because you can win some Aurifil thread and Moda fabric. Apparently there was an internet meme of Ryan Gosling photos with various "Hey Girl" slogans. I'm so far out of the loop that not only had I not heard of this meme, I didn't even know who Ryan Gosling was. Is that Kate Gosling's ex-husband? No, wait a minute that's Gosselin, and her husband's name is Jon. Hmm, you really don't have to know who Ryan Gosling is to enter the contest. Instead of Ryan Gosling, Aurifil took pictures of Alex Veronelli, to which we can add our own "Hey Girl" slogans to enter the contest. Who is Alex Veronelli? He is the Product Manager and Brand Jedi for Aurifil, but I suspect he gets paid to flirt with female quilters and seamstresses so that they will buy more thread. I follow him on Google+ and he has a good sense of humour and is a lover of the beautiful. Probably women as well as quilts.
I was actually quite surprised by how tall Alex is, looking at the pictures on Aurifil's website. Either that or he hangs out with some very short women. Somehow I had gotten the impression that he was a short, little guy. Perhaps I based that on the one and only time I went out with an Italian. He was shorter than me. He was also short on personality. But I won't hold that against Alex. Or Aurifil.
But back to thread: Sorry, Alex, but I'm just not ready to settle down. I'm still playing the field, exploring all the wonders and delights of the various brands. I've known Coats & Clark all of my life and we went steady for a long time. Then I met a couple of Germans: Gutermann and Mettler, and they really broadened my horizons. Coats & Clark introduced me to a cousin, Koban and I flirted with him for awhile. I'm discovering that there are so many threads on the market, that I don't know if I can be exclusive with just one. Maybe when I get more experience, I'll be ready to settle down. But you know, Alex, if you had come to the Creative Stitches show in Edmonton, you might have been able to charm me into making a commitment. <big grin>
I've been warned about Italians, though. And I'm really not sure I can trust them. But maybe, just maybe, if I had the opportunity to get to know one better, something beautiful might blossom, and I might... just... fall in love.
So really Alex, I need to win that thread so Aurifil can win my heart.
Now, all joking aside, it's time for Show & Tell, although I think I already started that by "telling" you about the Aurifil giveaway. As for what I'm going to "show" this week, I've decided on photography. The photo at the beginning of this post was inspired by the Aurifil contest. Honestly, I am not a photographer. I've never taken a photography class and I've never really considered it a hobby, but every once in awhile I decide I want to make a statement with a picture. This one started by wanting to write down a slogan I thought of until I had the chance to post it online. Don't you think my "Gone Quilting" sticky notes from APQS is the perfect spot? I just added my only two spools of Aurifil thread (and Alex, my LQS doesn't sell Aurifil, so I really think I should win this contest), and put it on my mini cutting mat.
Next, I decided to pursue some more "thread art." Unfortunately, I really don't have the props for the kind of pictures I would like to take. I wish I had my antique sewing cabinet, but it's in the repair shop. However, I did my best and used my vintage silverware case as the background for the sepia and black and white shots. I also threw in an older pair of my glasses. 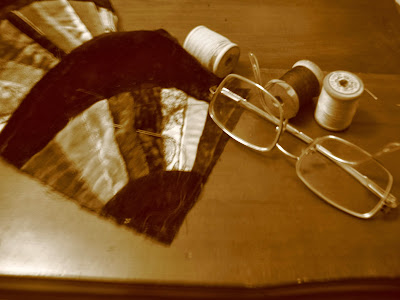 A friend had found a bunch of old velvet fan blocks and passed them on to me as she figured I would know better what to do with them than she would. That's what I used for this shot. Some day I will actually make them into some kind of quilt. And yes, those are vintage wooden spools of thread. 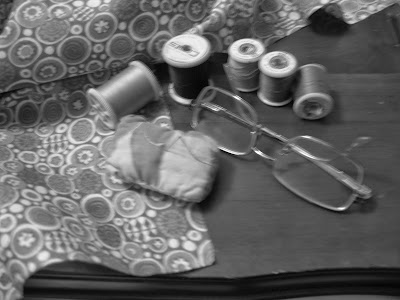 In this shot I have vintage fabric, some older plastic thread spools and a pin cushion made by someone in my family (it was in my mother's sewing stuff) from a piece of an old sheet. I think I like this shot the best, though it seems a little fuzzy.  Gotta work on that... 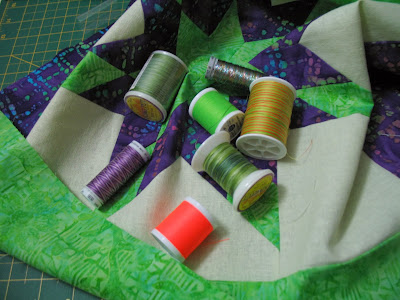 Some of my modern spools on a background of a block I did for the Craftsy 2013 BOM. The fluorescent orange and green threads were being sold at Fabricland prior to Halloween. I couldn't resist them because I just love these vibrant colours. I have no idea what I'm going to do with them, however. Sorry, no Aurifil in this picture.


Now it's your turn. Here's my button: