This is the first block I've completed in my group of "sisters blocks." My second oldest sister's name is Judy, so for her block I chose "Judy in Arabia," designed by Jeffrey Gutcheon and first published in 1976 in The Quilt Design Workbook This is one of only two blocks I was able to find that have one of my sister's names in the block name. I'm still curious as to how they come up with the names for blocks.
Judy's favourite colour is green so, aside from a little black background, all of the fabrics I chose to use in this block are in the green family. 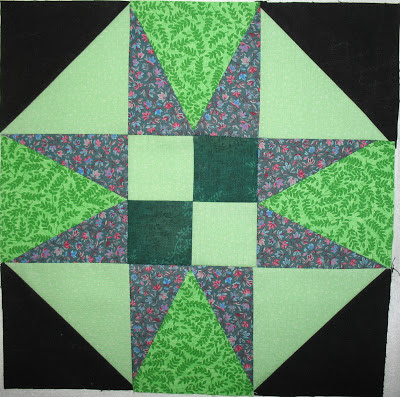 Judy in Arabia is a much simpler block than Lena's choice. It's a pretty straightforward variation on a 9-patch. The only challenging part was getting the angles correct in the centre blocks on each side. So I started with those. I assumed that they were 60 degree angles, but when I used the 60 degree marking on my quilting ruler, they didn't come out right. Hmm, it definitely wasn't a 45 degree angle and 30 degrees is just the reverse of 60 degrees. So what was it? In the absence of a protractor, I don't really know, but I would guestimate 75 degrees. I could have created templates based on my drafted block, but then I remembered a ruler I had purchased a couple of months ago and hadn't even used yet. Sure enough, it was the correct angle. It's called a Lazy Angle and you can get it here: https://www.stitchintheditch.com/Lazy_Angle_Ruler_Creative_Grids_p/cgr3754.htm

Here it is with the finished squares: 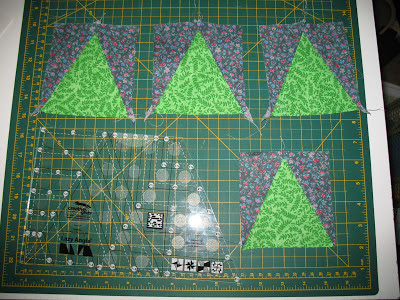 Here's what I did: I cut a strip of fabric 5-1/2" wide. From this I cut 4 triangles with the angle going in one direction, flipped the Lazy Angle ruler over and cut 4 triangles in the other direction. That was for the side, right angle triangles - the darker, flowered fabric. From the brighter leaf fabric, I cut a strip 5" wide and used the lazy angle to cut the centre triangles. Then I sewed the pieces together as shown and trimmed them up using my 4-1/2" square ruler.
If you want to do this block and don't have a Lazy Angle, the centre triangle can be made from a 5" square. Cut the sides from each bottom corner to the centre of the top. For the side triangles, cut a rectangle 5-1/2" by 2-3/4". Cut it in half diagonally and you will have two triangles. You will have to cut two rectangles left to right and two right to left so that you have 4 of each side triangle.
Next I did the centre square, which is just two 2-1/2" squares of lighter green and two of darker green. Sew them in contrasting pairs and then sew the pairs together. 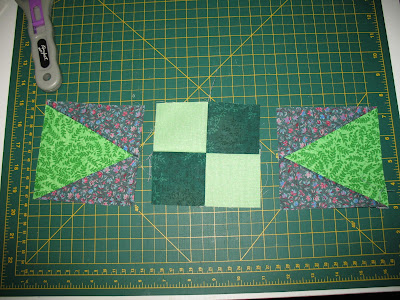 You can sew two of your side pieces on either end of the centre square and you've got the centre strip done.
Of the same light green fabric as in the centre, cut two 5" squares and two 5" squares of your background fabric. Draw a line diagonally from corner to corner on the wrong side of each of the light green squares, match each right sides together with a background square and sew 1/4" seams on either side of this line. 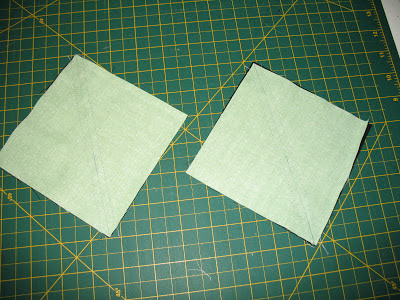 Cut each joined square in half along the line to form half-square triangles. Press open and square up. 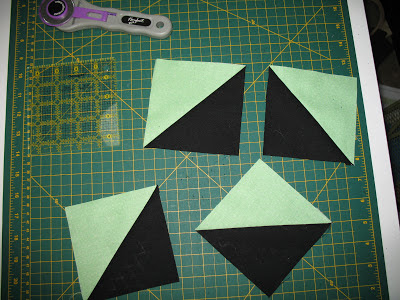 Arrange all your squares into the block. 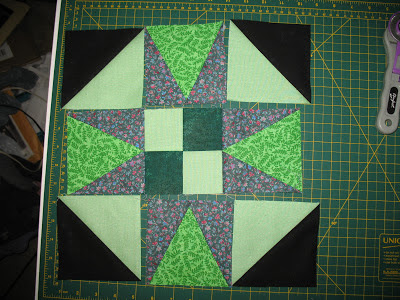 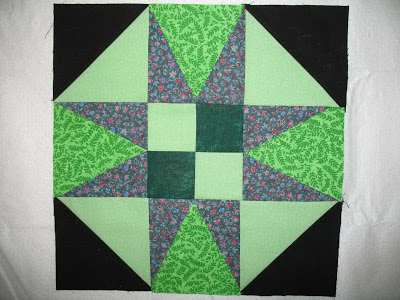 I'm going to be at Campmeeting July 12 to 21. I might even leave the evening of the 11 and I have to get my trailer cleaned up and packed before then, so don't expect to hear from me again before I get back. There's no WiFi at campmeeting. But I'll still be crocheting while there...