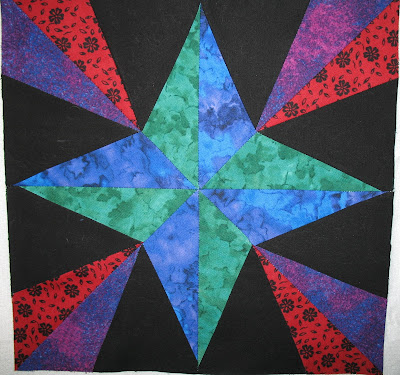 My youngest sister's name is Cindy, short for Cynthia Dianne (though I don't recall if there's one "n" or two in Dianne). So when I found this quilt block called "Cynthia Ann Dancing," I knew it was the one I would use in her honour as one of my sisters blocks.
Cindy's favourite colour used to be blue, but when I emailed my sisters for their colour choices for this project, she said that she now liked the deep jewel tones and fire engine red. Good thing I checked. As you can see, it made for an interesting colour combination. If I weren't doing this block in her honour, I don't think I would have included the red. I would have picked another jewel tone to give it a more homogeneous look. The cool thing about this block is that if you were to make a whole quilt of it, without using any sashing, you would end up with stars in both colour combinations.
There were two major challenges in completing this block. The first is that it is a 5-patch design and I am making 12 inch blocks. A 5-patch works well for a 10, 15 or 20 inch block, but it gets a little complicated when making it into a 12 inch block. The second is that it's got a lot of crazy angles. Not 30 degrees, not 60, not even the Lazy Angle. There are a few 45 degree angles in this block, but most of them are just "unique."
So, how did I make a 5-patch design into a 12 inch block? Well, I have two tools I can use. The first is an older 12 inch ruler that is actually divided into tenths of inches. I didn't really end up using that because I was able to buy the second tool: 10 to the inch graph paper. That's what I used to draft the design. If you look at the block, it's actually composed of 4 equal squares, so I only drafted one square. 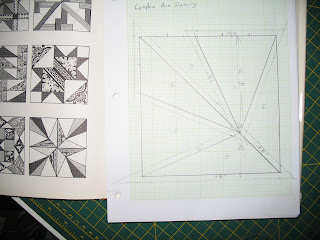 The unfortunate thing is that my design was then in tenths, so it got kind of complicated when I started adding 1/4" seams. You can end up with some pretty bizarre measurements, the markings for which are not found on the standard quilting ruler. That, combined with the crazy angles in this block prompted me to make templates. 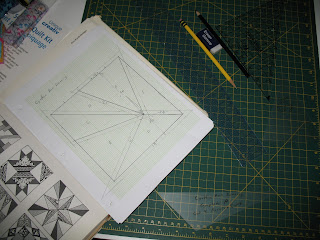 In this picture, you can see my drafting ruler with the blue markings. (Sorry, neither it, nor my templates show up very well against the cutting mat).  I got it at WalMart for a few dollars. The nice thing about this ruler is that it has markings in sixteenths of an inch, so you can use it for greater precision. It is a drafting ruler, though. It is not for cutting.
This design probably would have worked well with paper piecing, but I have no knowledge or experience with paper piecing. So, for me, templates were the way to go. If I were to do a whole quilt in this pattern, I would no doubt decide I needed to learn paper piecing because tracing out all those pieces would get rather tedious.
If you look at the block, you will see that there are actually only two different triangles that make up the whole block, so only two templates are required. If you had drafted the block like I did, and used the transparent template plastic, you could just trace the pattern onto the plastic. But I will tell you how to create the templates without having to draft the block first. Each triangle has one 45 degree angle, so that is our starting point. Here is a diagram I drew for reference: 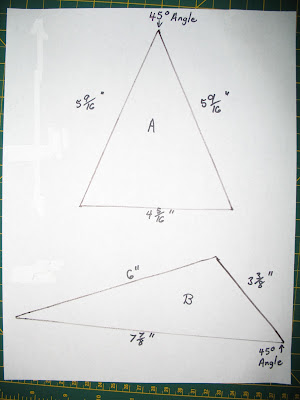 For template A, use your quilting ruler to draw a 45 degree angle. Make each arm of the angle 5-9/16 inches long. Connect the ends of the arms to make the base of the triangle, which should measure 4-5/16".
For template B, once again use your quilting ruler to draw a 45 degree angle. Make the one arm 7-7/8" long. The third side of this triangle comes out at exactly 6", so I used this measurement next. I took my ruler and measured from the left end of the 7-7/8" line and drew a line to where it intersected with the other arm of the 45 degree angle at exactly 6 inches. The 3-3/8" is not as precise a measurement as the 6 inches, so that's why I opted to use the 6 inches instead.
Cut out your templates. Using template A, cut eight pieces from background fabric. 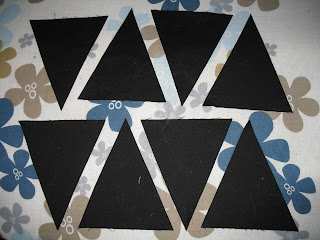 Mark template B so that you can tell the difference between the right and wrong sides. Using this template, cut out 4 pieces each of two different fabrics with the template ride side up.
I just laid the two fabrics on top of each other so that I could cut both at once. Remember that you can not fold the fabrics and both fabrics must be facing right side up. 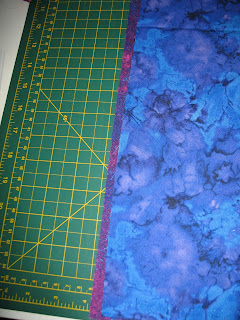 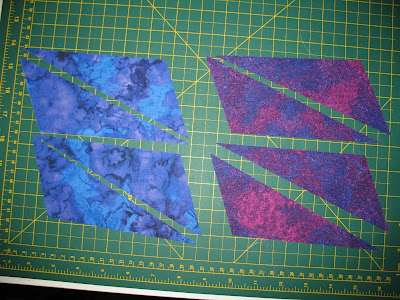 Flip the template so that it's wrong side up and cut 4 pieces each of the remaining two fabrics.
Arrange all of your pieces into order: 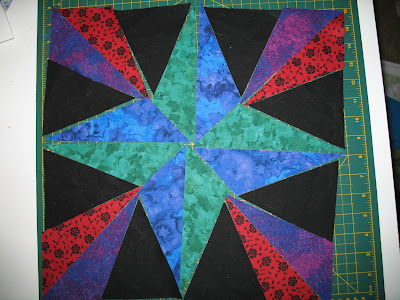 I
In the following picture, you can see that I have separated the block into the four squares. 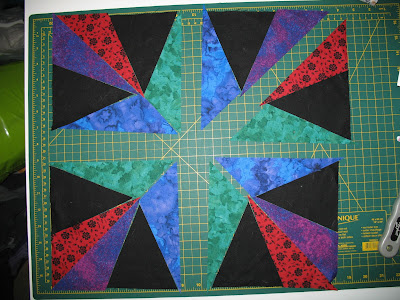 The top right square is divided in half diagonally. This is how we are going to sew this block. Sew two template B pieces on either side of a template A background piece to form a half-square triangle unit. Do this for the other HST unit. Then sew the two HST units together to form a square. Do this with all four squares. Square them up to 6-1/2". 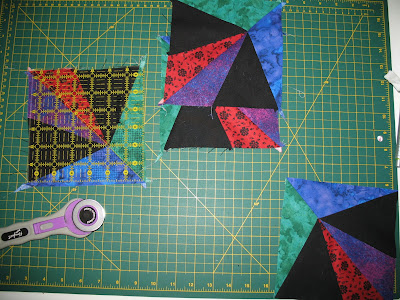 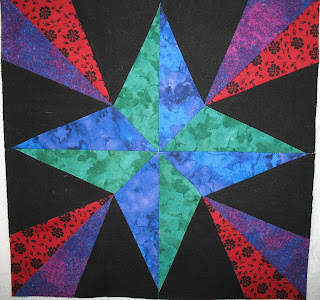 I think I need to work on my photography skills so that my blocks look square instead of trapezoidal. Something about the angle of the camera or something...