I was looking through Jenny Doan's YouTube tutorials for quilts that I could easily downsize for baby quilts. I had previously made a couple of Baby Alter Ego quilts, the first one still unfinished somewhere in my stash, and had figured this would become my go-to quilt for babies. And I bought a bunch of layer cakes to use in these. However, I'm really not the type to make the same quilt multiple times, so I was looking for new ideas. One of the ones I found was Night Sky. Here's the video:
I really liked this pattern and figured I could make it work, using half of a solid layer cake and half of a print one. I had this space-themed layer cake and decided that would work perfectly for this quilt.
I used to think that layer cakes were my favourite fabric pre-cut. Now that I've made a few layer cake quilts, I'm beginning to wonder if I actually have a favourite pre-cut. I don't like the pinked edges. In spite of googling and finding that I'm supposed to measure from the peaks, I still don't find that consistently accurate. And it's really challenging to keep your piecing accurate when all of the pre-cuts are not precisely the same size. And then there's the fact that many patterns waste fabric and time because they don't call for the exact measurement of the pre-cut. This pattern was a case in point. 168 half square triangle units that had to be trimmed up to 4½"! I suppose if I had the Clearly Perfect Slotted Trimmer (which is currently "only" C$64.59 on Amazon), it might have gone a little faster than using my small Easy Angle. But I seldom trim at the best of times. Trimming 168 squares was pretty painful for me, and a colossal waste of time, in my opinion. I think I would have been much better off starting with the exact size squares I needed to make the Easy 8 HSTs and not have to trim each individual one. So, using a layer cake was kind of pointless. And that made this quilt tedious instead of quick and fun. I was really glad when the quilt top was finally finished. 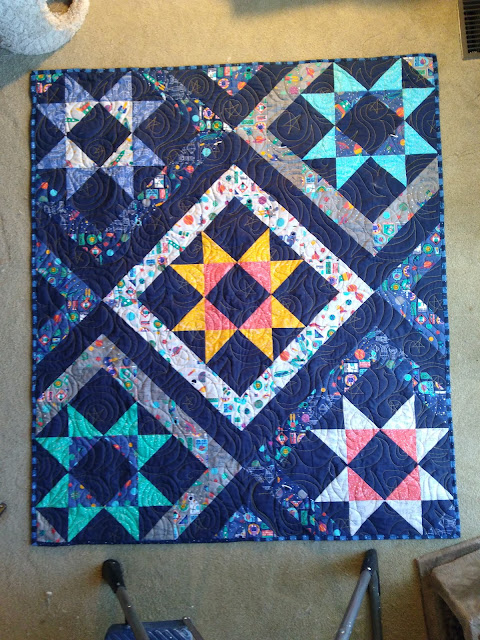 Initially, I wasn't sure what I was going to put in the corners. Based on Jenny's pattern, I couldn't fit more stars in and I tossed around different ideas. But then when I started playing around with the HSTs, I realized that I could fit the stars in just by a bit of rearranging.
As to quilting it, I was hoping to use Urban Elementz' Blast Off pantograph and had ordered it from a Canadian supplier during a sale. I should have known better. That particular vendor has a reputation for terrible customer service, but I thought, "How difficult can it be to ship me a few pantographs?" I won't go into all the details, but suffice it to say that I finally left them a message to either ship me my pantographs or refund my money. And I did get my money back, thank the Lord. But meanwhile, I missed the Urban Elementz sale because I had chosen the Canadian vendor. So, instead I chose the Windy Stars pantograph. I bought this one used and I think it's by a company that's no longer in business. It's the first time that I have used a staggered pantograph. I had to shift the pantograph each time I advanced the quilt so that the exact same part of the design doesn't line up all the way down the quilt. 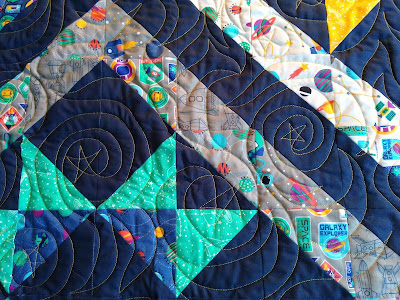 It was great and quite attractive. I didn't have a navy blue thread, which would have likely been my first choice for the quilting. So, I went with something more radical - a bright orange. And I like it.
Finally, I had to find enough fabric for the binding, which was rather challenging during a pandemic. I managed to piece together enough leftovers from the backing of a previous quilt. However, I didn't have quite enough of it that had all of the stripes going in the right direction. Look carefully and you can see it at the bottom left side of the quilt - the binding looks like it's a solid colour. Who cares? I'm sure the baby won't.
More baby quilts to come.