2020 was going to be my year of quilting. Not that I don't quilt every year, but this year Quilt Canada was to be in Edmonton in June. Central Sewing Machines was going to sponsor a Handiquilter Quilt Academy in October, the first time in Canada. I was also thinking of going to Heritage Park in Calgary for their Festival of Quilts in May. And in early March, I was able to take some Helen Godden classes at Central Sewing Machines in Edmonton. I'm really glad I took those classes because they may be the only ones I am able to attend in my "year of quilting". Thanks to the pandemic, Heritage Park is closed, Quilt Canada has been tentatively rescheduled for September. And the Quilt Academy has been put on hold until the organizers know that it can actually be held. Also cancelled are any of the local fairs where I was hoping to enter some of my quilts. So, the Helen Godden classes may be my only quilting event this year. And we got them in just under the wire. The classes were March 6 through 9, and the pandemic was declared March 11. 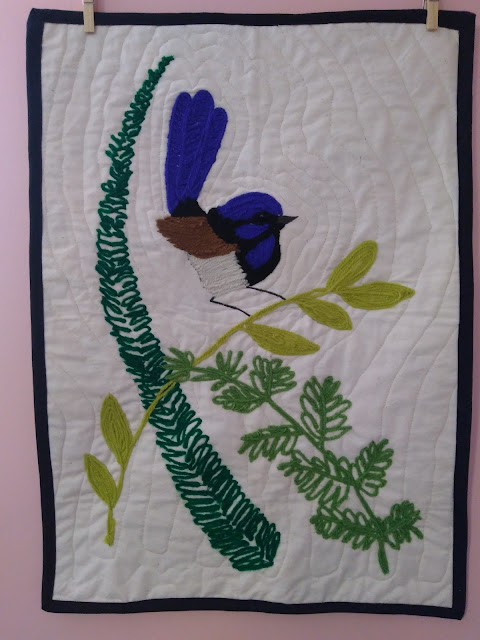 Because I'm a knitter and crocheter as well as a quilter, I took the Couching class. Couching is embellishing a quilt with yarn, though this project was actually creating a picture with couching. What fun! I had already purchased the couching feet for my Amara, but hadn't used them yet. Now I at least have some knowledge and experience. I just have to find a quilt that it would work on. 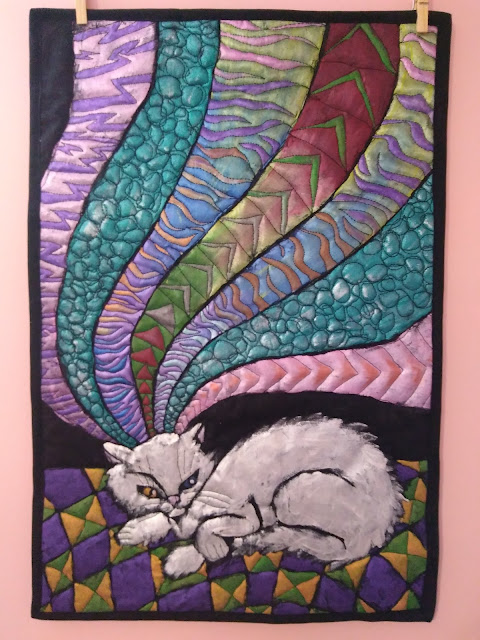 I debated on whether I was going to take the 2-day class, Flying into Colours. Painting really isn't my thing, and I couldn't imagine that I would ever use the skills learned. But I decided to anyway, and I don't regret it. It was a lot of fun, and, as I said, these may be my only quilting events this year.
Thanks Central Sewing Machines for sponsoring these classes, and thanks Helen Godden for coming from Australia to give them.