On Guard For Thee

Quilter's Connection is a magazine for Canadian Quilters. I don't subscribe, by the way, but I did decide to take part in their Canada Eh? Mystery Table Runner Contest. I'm still waiting for them to post the results, but the above picture is my entry. This is the very first time I've taken part in a mystery quilt. You may remember the mystery crochet along that I took part in, and quit only part way in because I was not happy with the results. But as this was just a table runner I figured I could give it a shot.
When I chose fabrics for this project, I assumed most people would be using whites and reds, the colours in Canada's flag. I wanted something a little more unique, but wasn't sure what. I looked at various fabrics at my LQS, and finally settled on a red and black combination. This is the colour combination of the poppies we wear for Remembrance Day.
Without the valour, courage, honour and bravery of our veterans, we might not have a Canada to celebrate. Therefore, I chose to honour those who served as well as celebrate our country with this table runner, especially since 2017 is also the 100th anniversary of Vimy Ridge.
The backing is a floral print, reminiscent of poppies. 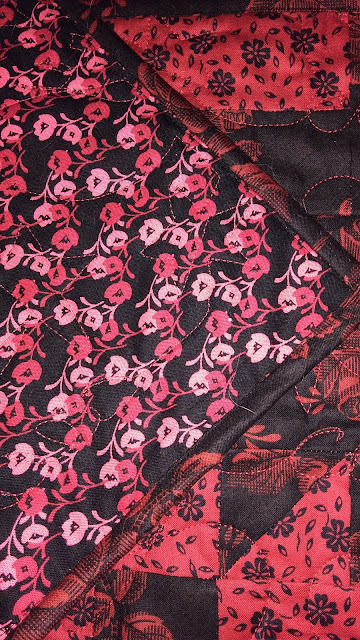 As far as I'm concerned the "pièce de résistance" is the pantograph I used to quilt this table runner. It's called From the Heart, and quilts the words, "honor, courage, valor, bravery" into the runner. (Unfortunately, this made in the USA pantograph leaves out the 'u' in honour and valour). It was a bit of a challenge to quilt, however, as when following a pantograph, you work right to left, so I was quilting the words "backwards." I had to just think of them as quilting patterns, not words. 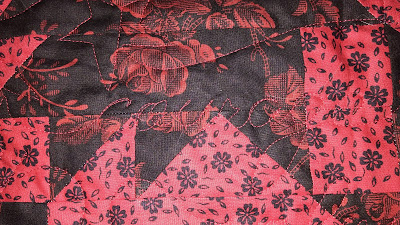 This will make a great pantograph for a QOV.
I named my table runner, "On Guard for Thee," which is a line from our national anthem, for those of you who are unaware.
When I tried to submit my entry, the website was undergoing revision (or whatever). It seemed like a rather unfortunate decision to update their website on the weekend that the submissions were due. So, I just emailed my entry to the email address on the page that announced their website reconstruction, hoping it would get to the right place... I guess I'll just have to wait and see.

Someone once said that colours in cell phone pictures are not as true as those taken with a camera. Until this table runner, I hadn't really noticed. The very first picture in this post was taken with my digital camera. It's having issues and I either need to get it repaired or replaced, so I've mostly been using my cell phone. But you'll notice that in the other pictures, the red looks a little pinkish. In the full runner picture immediately above, I did increase the exposure as it was quite dark, but the black flowers on the red fabric look more like dark pink. I didn't make any adjustments to the picture of the background fabric, but the darker flowers, which are actually red look more like a dark coral in the picture. I guess I'd better invest in a new camera if I want my pictures to have true colours.