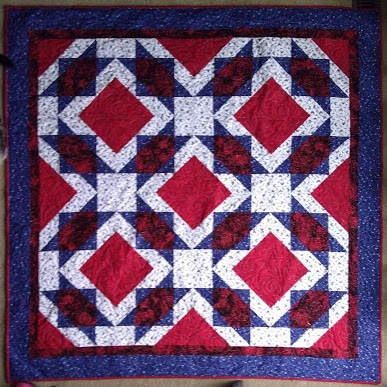 When my nephew Bradley bought his first home, I offered him Stars Over Africa as his housewarming gift, or gave him the option of me making a different quilt with colours of his selection. He wanted one in red, blue and either black or white and I chose the Floating Stars quilt from this book: I reviewed it last summer and made the Fractured Pinwheels quilt from it. I really like this book because it has patterns for quilts that are both quick and attractive.
I took the finished quilt top with me to my LQS when I quilted Stars All Around, as I intended using the same thread and pantograph for both. Well, first of all, I didn't end up using that thread for Stars All Around as it was polyester and I didn't know if I should mix it with cotton in the bobbin, and I didn't have a polyester for the bobbin. And after finishing Stars All Around and seeing how big the stitches were even though I had the quilt speed at the maximum (that's when I finally realized that machine was not stitch-regulated), I decided I didn't want to do Floating Stars on that machine as well.
I ended up taking it in to Central Sewing Machines when I took in the "On Guard For Thee" table runner. The table runner went fine, but when I switched to this quilt, I had continuous problems with threat breakage. I had someone from the store check the machine numerous times and try different suggestions and adjustments. They finally concluded that it was the thread I had brought along with me. It's a spool of Aurilux from my thread stash. As far as I know Aurifil doesn't even make Aurilux any more, but it's still good quality thread and I couldn't figure out how that could be the problem. Nevertheless, it was too frustrating to continue as I was, and I bought a similar colour Affinity thread from the store.

Unfortunately, it still didn't solve the problem. And I had to get someone from the store to help me out once more. He finally took the bobbin out and was able to determine that it was not feeding evenly. So he rewound it onto another bobbin, and I had much fewer problems after that and was able to finally finish the quilt.
Now I have two spools of red, white and blue thread. Fortunately, one of my nieces has informed me that she wants her quilt to be red, white and blue as well. So, I have at least one more quilt that I can use them on.
Oh yes, I didn't mention that between my first disastrous attempt to quilt the Bluenose II at Central Sewing Machines and this time, they had decided to provide thread and prewound bobbins (none of the provided threads were variegated, so I opted to use my own) as part of the rental price. Of course they increased the rental price to $20/hour. The prewound bobbins are magnetic so you can't put them in the wrong way. However, it was these that seemed to be causing all the problems. Once rewound on a metal spool, it seemed to stitch more smoothly with less breakage.
Moving on to the actual quilting, above is a picture of the quilting on Stars All Around and that on Floating Stars, both done on a Handiquilter, both using the Becker's Shooting Star pantograph. However, as I mentioned, the Stars All Around was done on a non-stitch regulated machine. And I don't think I'll be using that machine again - the stitching is just too big and sloppy. It's too bad because my LQS only charges $35 per quilt, whatever the quilt size. But this is the only machine set up to use pantographs. And I'm really not big on free motion. 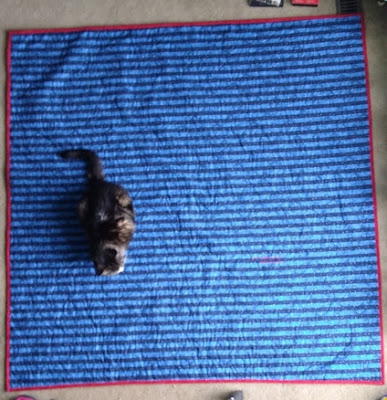 Tinker, one of my QI's (Quilt Inspectors) had to inspect the backing on the Floating Stars quilt.
One more quilt done and sent to it's recipient.
Posted by Laura B at 19:35