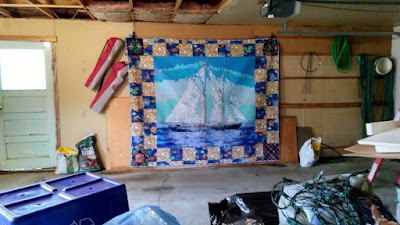 Now that your quilt is finally finished and on its way to you, I decided to tell you its full story.
Since you love the ocean and your favourite colour was blue (that was before you told me that you now prefer the jewel tones), I decided to make you a quilt with a nautical theme, and I started collecting blue fabrics (which I didn't end up using since they were print and I needed solids for this quilt). There are a number of quilt block names that are related to the ocean, and I figured I would likely pick one of these. But I was letting it percolate in my mind for awhile.
Meanwhile I enrolled in an online quilting class called Pictures to Pixel Quilts. The quilt for the class was a picture of the instructor's eye. Boring. So I started looking around for ideas. In Microsoft Paint, I pixelated a hydrangea photo that I took at Muttart Conservatory. But I wasn't sure if I wanted to try making a quilt out of that either. It was a pretty tedious job trying to calculate the colours...
One day I was perusing the latest issue of Canadian History while I was home on my lunch break. It had an article on the Bluenose II, and I had a sudden lightbulb moment. That was it - I would do a pixel quilt of the Bluenose II. Perfect! You love the ocean, you love Canadian history and you live in Nova Scotia - what could be better? I had no idea what I had gotten myself into.
In the pixel quilt course, we were introduced to Pic 2 Pat, an online website that converts photos into cross-stitch patterns. Then I had to find a decent picture of the Bluenose II, and upload it to the sight. I had to play around quite a bit to get it the right size. Initially, I was going to make the whole quilt a pixelated picture. But I decided that was a little overwhelming and settled on just the bed top. More or less. It was challenging to get the size right and I settled for what would approximately cover the bed top. I also had to determine the number of squares and colours. The more squares and colours, the more detail in the picture, but also the more challenging. And I ended up settling on 1-inch squares and 77 colours.
The pattern gave the colour requirements in DMC floss. But I was using fabric not floss. So, somehow I had to convert it. I bought a DMC floss colour card and a Kona cotton colour card. Kona is one of the best known lines of solid-coloured fabric in the quilting world.

Unfortunately, the floss card only had pictures of the floss, not actual samples.
And the Kona card only had 1-inch samples of fabric. That made it very difficult to compare colours. So my buddy, Phil, who works in a sign shop and knows his colours, and I went to Michael's to compare actual floss with the Kona Colour Card. And I duly noted down our selections. I had also picked up some solid blue fabrics in Ontario at the Aylmer Sales Arena, so they too had to fit into the colour scheme. And Michael's didn't have all of the floss colours either, so I had to do my best with comparing the two colour cards. Unfortunately, there are more floss colours than there are fabric colours, so some fabrics had to stand in for more than one floss colour. I ended up with 66 colours, 41 of which were shades of blue. Did you know that there were even that many different shades of blue? Wow!
I have to pause for a minute and give credit to my pal, Phil. How many men do you know that would have that kind of patience? So, you owe some thanks to him for his part in the colour selection.
But the fun had just begun, because I still had to calculate fabric requirements. The pixel part of this quilt is 63" x 72". That means 4,536 one-inch squares. So, I had to count symbols on the pattern to determine how many I needed of each symbol, which would translate into each colour of fabric. Now, of course, on the pattern, these squares were smaller than 1/8". So, I had lots of fun trying to count those miniscule symbols, some of which look very much alike. Then I had to calculate how many 1-1/2" squares (with seam allowance) I could fit into different measurements of fabric. I actually created a spreadsheet in Excel, indicating the DMC colour number and name with the corresponding Kona colour number and name, and the number of squares I would need of each colour.
In addition to the fabric I bought in Ontario, I ended up ordering from three different vendors, because no one vendor had all of the colours I needed. I ordered some charm squares (5" squares of fabric, which would yield nine 1-1/2" squares), fat quarters (an 18x22" piece of fabric), half yards and yardage. And when they all finally arrived, I labelled each piece of fabric with the corresponding DMC floss number and arranged them all in numerical order. However, as I progressed through the quilt, it was very difficult to keep them that way, especially the ones that represented more than one floss colour number.
I also had to decide what to do for borders and backing. I found a boat fabric on eBay, but miscalculated somehow and didn't order enough. 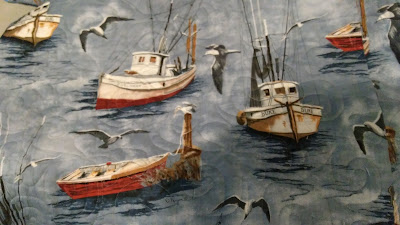 Fortunately, it was still available and I ordered the rest of what I needed.
For the borders, I decided to alternate an underwater fabric with seashells on the sand fabric, 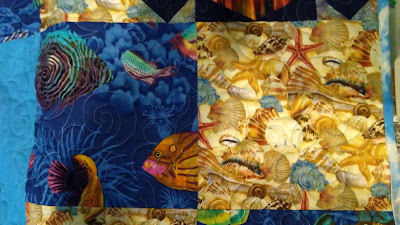 and use a different nautical themed block for each corner. In those, I hoped to add the jewel tones that you like, and bring out some of the colours from the border fabrics.
But back to the pixel part of the quilt - rather than do the large areas of the same colour in individual 1" squares, I chose to do it as larger pieces of fabric. Otherwise, you'd probably still be waiting. I realized, however, that when sewing rectangles together that went every which way, the seams didn't always line up and I had to chose to do only one row of squares at a time - not 2 rows by 4 columns or 3 rows by 3 columns. I put the main fabrics I was working with into bins on my cutting table and labelled each bin with the floss number and symbol. I chose to work in mostly 10" blocks. Once I got to the more challenging parts, I decided to draw a couple of 10x10 grids on my design wall (which is just a vinyl flannel-backed tablecloth with the flannel side out) to keep track of which square of fabric went where. I also discovered that I couldn't work on this quilt if I was feeling tired. I had to be mentally alert to keep the colours in order. 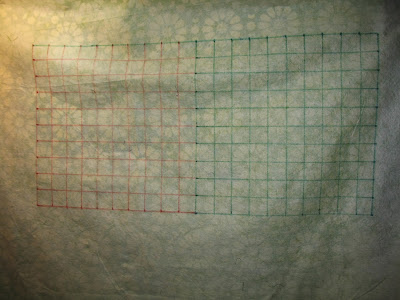 The quilt was about 3/4 finished when I decided that I really needed to get the sewing room renovations done. My design wall with the current squares I was working with came down off the wall, and everything was put away wherever I could find room. That ended up being quite a long quilting hiatus. It's very challenging trying to do renovations while working full time, and I finally hired help. Meanwhile Sophia and Damian moved in, and, since Grandma is Damian's favourite playmate, I still didn't get back to your quilt right away. To be perfectly frank, it was tedious and hard to keep motivated.
Last fall, I determined to get back at it and finally finished the quilt top. All that was left was the quilting and binding. Unfortunately, I had that aborted attempt at Central Sewing Machines, where it seemed everything went wrong. My time is limited for when I can get into the Longarm studio to quilt, but over the Christmas/New Year's season, my favourite - but most expensive - quilting studio had a half price sale and I booked 6 hours on the first available date that I had off and they had time available. That was April 7th. And I switched threads. I didn't think the Aurilux thread (on the right) was blue enough - it's more teal/aqua than blue, so I bought a variegated Artistry thread (on the left). 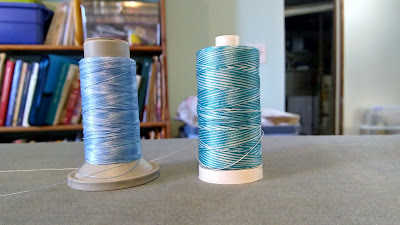 I figured 6 hours would be ample for this quilt, and hoped I might even get a chance to do another, smaller quilt. Ha! Fortunately no one else was booked for the Longarm machine after me as I used a fairly dense quilting pattern (Wave Upon Wave) 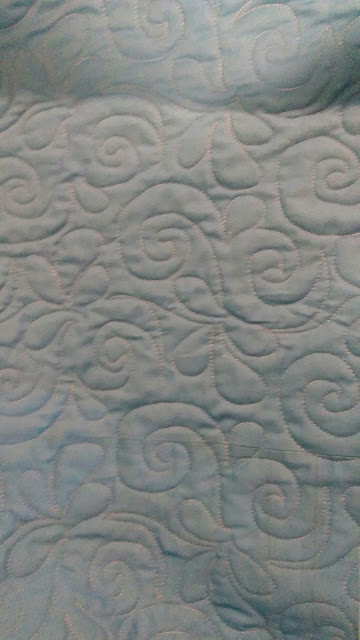 and it ended up taking me 7 hours. And my feet were killing me afterwards. But I was so happy to finally have it done. All that was left was the trimming and the binding, which was also lots of "fun" maneuvering all of that bulky, heavy quilt. 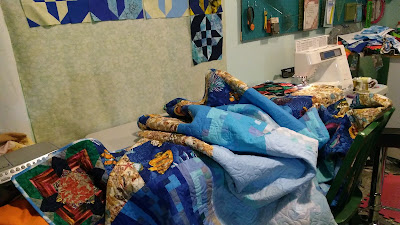 And, as I said, it is heavy - the parcel weighed over 3.3 kg. You'll also find it stiff initially, until it's been washed at least once. 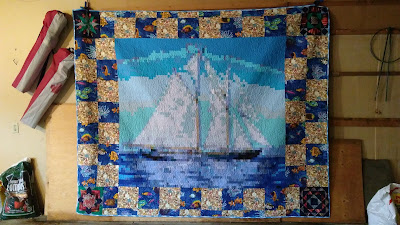 Up close, a pixel quilt looks just like a random bunch of squares of different coloured fabric. The farther away you get, the better it looks. That's why I took pictures in the garage (it was snowing/raining so I couldn't take them outside). 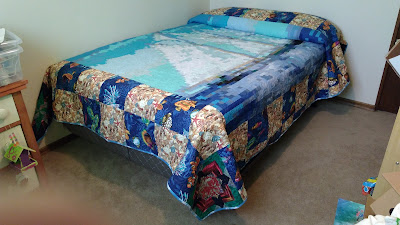 Enjoy your quilt. I will likely never make another like it.
With lots of love,
Laura
By the way, I have since found a website that makes actual pixel quilt patterns, and calculates the yardage and colours for you. Oh, how much time I could have saved if YouPatch had been available when I first started designing this quilt!