Yesterday my daughter, my grandson and I went to the New Year's Day sale at Fabricland. It was Damian's first visit to a fabric store. He's 16 months old. Initially he stood just inside the door, dumbfounded, I assume by all the different colours and patterns of fabric. And how much of it there was. Then I got a shopping basket. You know those shopping baskets you can get at the grocery store when you're only getting a few items? Well, these were similar, only bigger and they had wheels and a pull handle. Damian took to that basket immediately and began pushing it around the store at high speed. I monitored and guided his course while his mother was looking at fabric. I hadn't really come to buy fabric for me. All I wanted was a new cutting mat, preferably the big rollable one. However, once I grabbed one, I kept looking at it and considering whether or not it would fit on my cutting table. I thought it looked wider, but Sophia thought not. However, I eventually decided it was too wide and instead opted for a Unique 24"x36" cutting mat, which is still bigger than my 18"x24" one. I was glad I had made this choice when I got home and measured my cutting table. 32" wide, whereas the rollable cutting mat is 36" wide. I also had a quick look for railway/train fabric, without success. Sophia never noticed any either. My buddy Phil is a big railroad fan and I'd like to make him a quilt to coordinate with his interests. In my internet surfing, I became aware of the Rail King quilt using Quilting Treasures Rail King fabric and I saved the pattern to my computer for "future consideration." Recently, I was able to purchase some fabric from the Locomotion line from Benartex. When I saw this fabric, I wondered if there was a pattern using it and sure enough, I found Benartex had this All Aboard quilt pattern, and I saved that one to my computer as well.
Here's the panel: 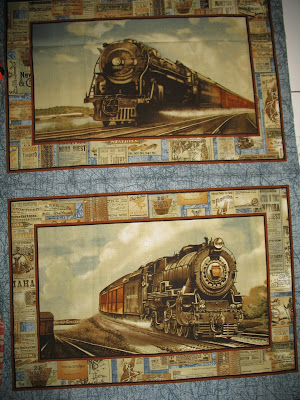 And here's the other fabric I bought from the same line: 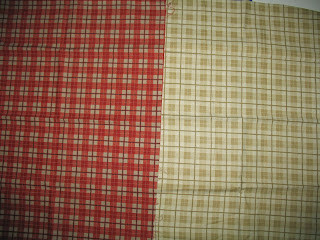 You can see both of these are used in the All Aboard pattern.
I'm finding the Locomotion fabric is not all that easy to find. One US vendor I wanted to purchase from wanted to charge me over $25 for shipping 1 yard of fabric. When I had 3 or 4 yards in my shopping cart, the shipping jumped to over $30. That's much too dear and not what shipping needs to be. I know that a USPS Global Priority envelope to Canada, which can fit up to 11 yards of fabric, costs only $19.95, so I'm not sure why the exorbitant shipping costs with this vendor. However, the Rail King fabric seems to be more readily available, and from vendors whose shipping is more reasonable. And the Rail King quilt is bigger. I will probably end up combing fabric from both lines and alter the Rail King quilt pattern slightly to use the Locomotion fabric as well.
Meanwhile, my daughter was choosing fabric. I took her to some quilting classes when she was about 10 or 12, but she hasn't done any quilting since. I don't think she's ever finished a quilt. She hasn't sewn any clothing for quite a few years either. And she wants to get back into it, both quilting and sewing. She is going to use the Bric and Stones pattern from Annie's Learn to Make a Quilt from Start to Finish online class. You can see a picture of a finished quilt in this pattern here. Here's the fabric Sophia chose for the quilt top: 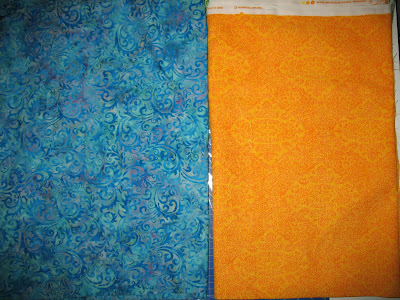 I don't think I've ever made a quilt using only 2 fabrics, but I do like the pattern and the fabrics she's chosen. My daughter's favourite colour is orange, by the way.
We also spied this fabric in the bargain section: 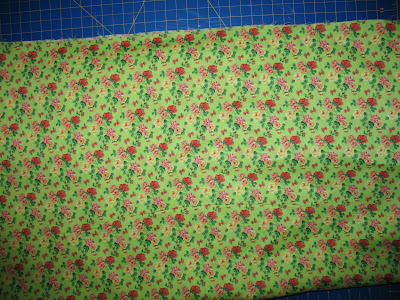 We both liked it, so I asked her if she wanted some. She then selected four dress patterns (at $1.50 each) and we got enough yardage of this fabric, plus the requisite notions for her to make one of the dresses. By then, Damian was starting to get a little fussy, so Grandma was carrying him around when he spied some of this fleece fabric: 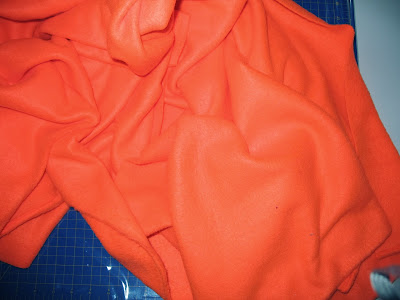 Like his mother, he really likes orange, so I bought a remnant I found. It should be enough to make him some blanket sleepers. Now we have to find a pattern, one with feet in them. Little feet can get awfully cold at night when the covers get kicked off.
Today, I moved my office stuff out of Sophia's bedroom, down to the basement. So she's got more space in her room and my office is more or less set up again. Still haven't gotten the sewing/quilting stuff organized. I realize that I own TOO MUCH STUFF. I had originally planned on putting in a second kitchen in the basement, so I have accumulated lots of kitchen stuff down here. I owned my own fridge and stove when I bought this place, but ended up with a second set with this house. Extra mixing bowls, small microwave, etc. are all down here in the basement. I didn't buy them especially for this second kitchen. They're just extra stuff I have accumulated. Well, now that the sewing room and office are down here, it's not likely there is ever going to be a kitchen, so I need to offload most of this stuff. I'll keep the fridge because it's always nice to have an extra, especially since the one in the kitchen is a side-by-side and doesn't hold much. In addition to the kitchen stuff, there's a lot of odds and sods that I'm now questioning why I've kept these things around. I plan on having a major yard sale in the spring. But I've got to put it all somewhere in the meantime. Just how high can I stack things in the garage? Because it's got to go out so that I can set up my sewing room. Especially now that there's another sewist in the house.
Posted by Laura B at 20:10