Vegan Under Pressure - A Cookbook Review

When I posted to a facebook group for vegan Instant Pot recipes that I had received my order of this cookbook from Amazon, I was asked to share my opinion of it. So I figured the easiest way to do that was to write a cookbook review on my blog. First of all, here's the link to the cookbook:Apparently if you purchase through this link, I will get some money. I have no idea how much because I have yet to earn anything by posting Amazon links... 😄
You might want to click on the "Cookbook Criteria" tab above to review what I look for in a cookbook.
Is it vegan/plant-based? Check.
Is it whole food? Not 100%, but most of the recipes are. It does have a couple of recipes for Seitan, plus recipes that use Seitan, which, of course, is not a whole food. Oil is called for in many recipes, but is usually listed as optional, and it's only small quantities. And the risotto calls for Arborio (white) rice.
Does it use meat analogues (fake meat)? Not that I could find. It even provides a recipe for making your own vegan sausage.
Does it limit the use of obscure, exotic and specialty ingredients? Not sure whether I should put tempeh into this category or the above or the below, but there are recipes that call for it. And tomatillos, soba noodles, ume vinegar, kombu, miso paste, okra... I'm talking about things that are not readily available in the grocery stores in my small town in rural Alberta. For this category, it depends on the individual recipe - whether the item can be left out or subsititued. Or if I, or another cook, really want to try the recipe with that ingredient, am I willing to include it on a shopping list for my next trip to the nearest big city? Maybe or maybe not. Most of my trips to the city involve fabric stores, which are not generally reliable sources of ume vinegar...
Easy to follow instructions: yes.
Limited use of ingredients I don't like: fennel, mushrooms, cilantro and tempeh are found in recipes in this book. However, I have found plenty of recipes that either don't include these or I can readily substitute. Unfortunately, the vegan sausage recipe calls for mushrooms and I'm still debating on whether I will be able to substitute eggplant...
Awesome food photography? Yes, but not enough of it to suit my tastes, and I would rather have it accompany the recipe that's pictured than lumped together in one spot.
Glossary? yes. Plus lots of tips for cooking with a pressure cooker. And seasoning recipes for the seasoning blends called for in recipes in case you want to make your own or can't find them in the grocery store. Also cooking timetables for individual foods (grains, beans, vegetables). Excellent!
While some of the above comments are negative, bear in mind that there are very few cookbooks out there that would have no negatives in response to my criteria. These criteria are ideals, not absolutes.
Now let's explore some of the recipes. 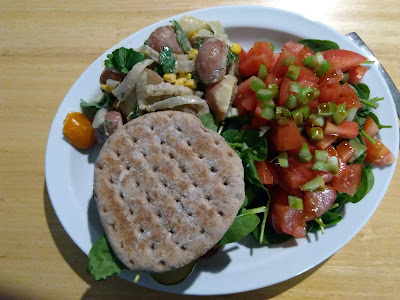 The first meal I made was the Potato Vegetable Salad (page 140) and Black Bean and Quinoa Burgers (page 234), with a side salad. As I mentioned in my Cookbook Criteria, I do not like the taste of licorice. Anything with a licorice-like flavour is not included in my cooking. So I substituted fresh dill for the tarragon in the dressing. And it was delicious! The only correction I would make is that the directions fail to say to drain the potatoes before adding the dressing. Otherwise, you would end up with your potato salad swimming. 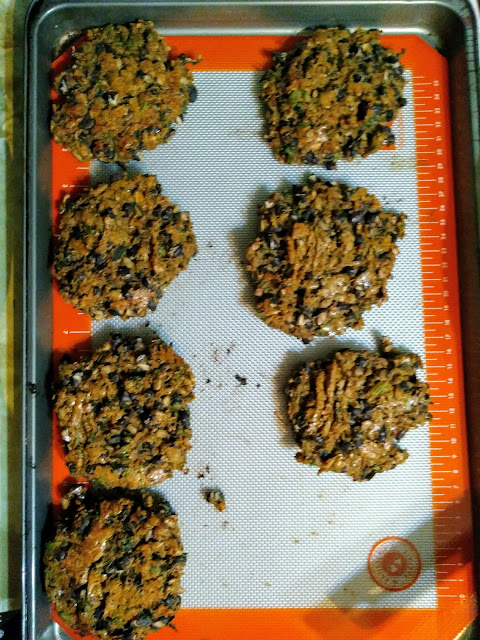 Normally I use a canning jar ring and lid to make my burgers, and they turn out nice and round and uniform, but I couldn't find a lid. They still tasted good, but I felt that they needed some salt added. Perhaps it was because I used low sodium vegetable broth. Otherwise tasty and nice texture. 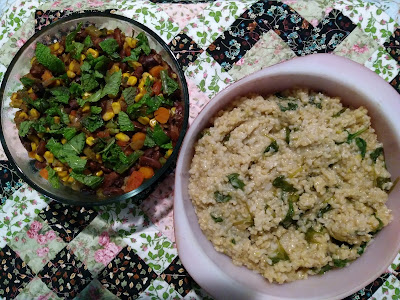 The next meal was Graciela's Colombian Beans (page 108) and Basic Risotto (page 78). You'd have to really like "hot" in order to use a whole tablespoon of chili powder in the beans. I used only 1 teaspoon and I still found it too hot for my tastebuds. In step 4 of the recipe, you are to add the vegetables and either bring to pressure and cook for one minute or let sit with the lid on for 5 minutes. I tried just letting it sit for 5 minutes in my Instant Pot and found the veggies still hard and crunchy, so I then did the 1-minute pressure cook and they were fine. And the dish was tasty. For the risotto, I did not use white rice. I don't buy white rice. Instead I substituted short grain brown rice and cooked for 22 minutes, as per the instructions in the rice cooking table (page 53). I also sauteed the onion and garlic in vegetable broth, rather than oil. To the best of my memory, I have never eaten risotto. I wasn't even sure what it was, other than a rice dish. So, I googled it, and this turned out nice and creamy like Google says it should. I threw in some spinach for added nutrition. Afterwards, I looked down at the bottom of the page and saw that there actually is an option for Spinach Risotto, but it has more than just spinach added. I might try that next time.
I get together with my ex-husband, daughter and grandson for Christmas, and all I'm generally expected to bring is my own vegan entree. So, while I don't generally make or eat Seitan because it isn't a whole food, I decided to give the Chicken-Style Seitan a try and make it "Kentucky Fried" using a so-called KFC Original Recipe that I found online. Unfortunately, I did not get a picture, but I will tell you what I did with the recipe. In the dough, I substituted 1 tablespoon of chicken style seasoning for the 1/2 teaspoon salt. (I used Blaney's brand, and if you're in Alberta, you should too, because it's a local product). In the broth, I switched Bragg's for the tamari and reduced it to 1 tablespoon, omitted the kombu and the ginger and added 3 tablespoons chicken style seasoning. It turned out delicious with a nice texture. Unfortunately, I made the mistake of following the recipe for KFC seasoning. It's been over 40 years since I've eaten KFC, but I highly doubt it was ever that peppery. And this was peppery in the extreme, to the point where pepper is about all I could taste. And I never was a pepper fan. So I definitely do not recommend that you follow this recipe without drastically reducing the pepper. But that's no reflection on this cookbook. The KFC recipe was from an external link. But here's what I actually did do differently with the KFC recipe: for egg, I substituted a ground flax/water combo and for buttermilk, I put a tablespoon of lemon juice into a 1 cup measure and filled it with soy milk and allowed it to sour. And I baked, not fried. If I had an air fryer, I would have tried that, but nothing would have helped tone down the overwhelmingly peppery taste. My grandson wanted to try it, but my daughter wouldn't let him after I commented on how peppery it was. Fortunately, I at least tried the Seitan before I nearly destroyed it with the KFC recipe so that I at least knew it had tasted good. 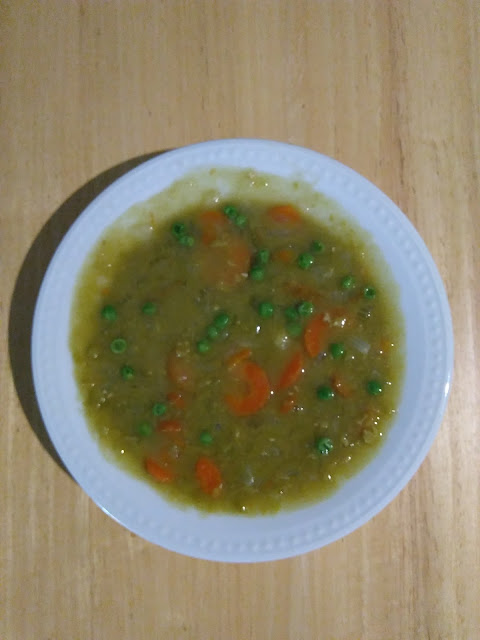 Next up was the Spring Split Pea Soup (page 190). I'm not a seaweed fan (not to mention where do I buy it locally?), so I omitted the dulse. Instead, I added a couple of shakes of liquid smoke, and the result was yummy! The only change I'd make would be to cook it a little longer as I found the split peas still slightly crunchy. 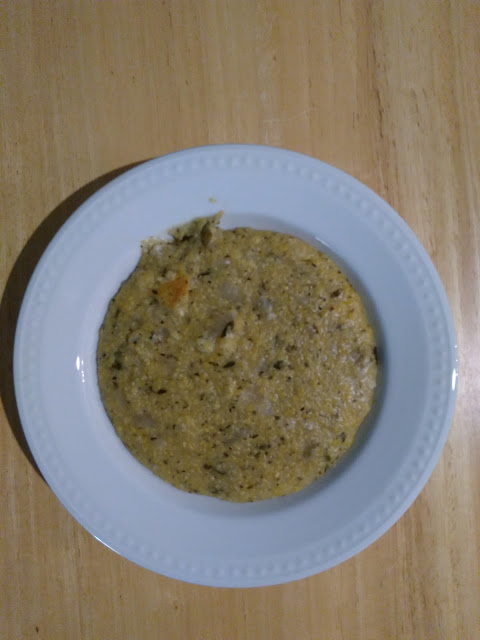 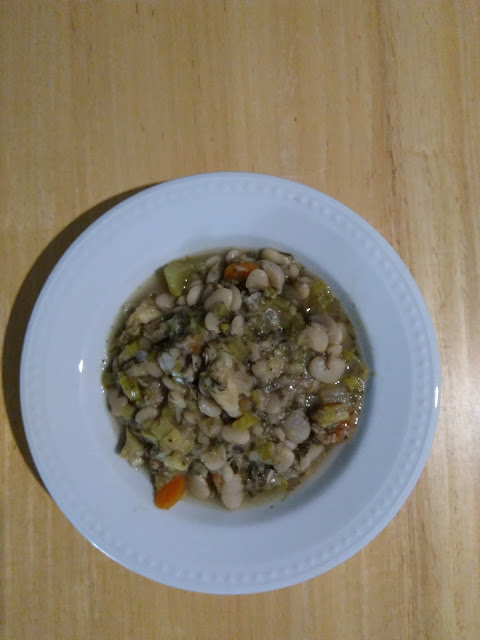 and Greek Stewed Lima Beans (page 109). For the polenta, I ate a bowl of it, and then spread the remainder into a square glass baking dish, allowed it to cool, sliced it and baked it, topped with Daiya cheddar flavoured shreds (another product I seldom use, but I had it in the fridge and decided to try it on the polenta), in the oven at 450०F for 15 minutes. Next time I might try the broiler and crisp it up a bit. Otherwise, very good. Another first for me. I'm used to eating cornmeal mush for breakfast with maple syrup and milk. This is the first time I've eaten polenta. And it was good.
For the lima beans, I swapped out the fennel bulb for celery and the fennel fronds for dill. And it was scrumptious. I brought leftovers of both these last two dishes to work and got comments, "Does that ever look good!"
All of the recipes I've tried so far are "keepers": ones that I will likely use again. And so this cookbook is also a keeper. In addition to really good recipes, it gives lots of worthwhile information on using the pressure cooker as well. While the author uses a stove top cooker, I personally own an Instant Pot, which is what I used to test these recipes, and found that they worked well. I did do a fair amount of tweaking of the recipes, but that's mostly a reflection of my personal tastes and experience in cooking for many years, not how good this cookbook is. I already have several vegan pressure cooker/Instant Pot cookbooks on my Kindle. But I prefer an actual book when it comes to cookbooks. This one came highly recommended and I second that recommendation. I already have several more recipes from it on my menu for the coming week. It's seldom that I trial this many recipes from a cookbook without having at least one dud. But so far, it's all good.