The Art and Science of Mathematics 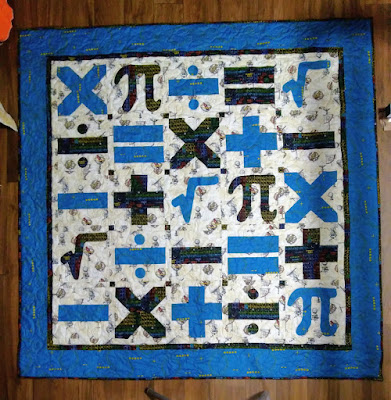 He was a mathematician who had worked in the oilfield, so his mother told me. But by the time we met, he was incapable of telling me that himself, no longer able to verbally communicate. He was dying. I remembered a friend telling me that her father was presented with a quilt while he was in the hospital dying, and how much it meant to her. So, I determined to make this mother and son a quilt.
I like to customize my quilts as much as possible, so I googled "math quilt." I found this one from Whistlepig Creek Productions. The picture on the pattern shows the quilt in very bright, vibrant colours, but I didn't think that was the most appropriate for this situation. And I remembered seeing some fabric at Fabricland that might be appropriate. I just couldn't remember if it was math or science.
When I arrived at Fabricland, I discovered it was mainly science. But, to me, math and science are very closely related. I selected three fabrics to compose the quilt top.
I chose "Galileo" from Windham Fabrics for the background. 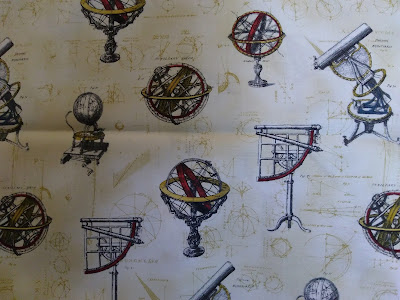 It's not a typical background fabric because it has a very distinct print. But I tend to find solids boring and I couldn't find a more appropriate tonal, and I wanted the background to "say something."
The other fabrics I chose were "Compass" by Alison Glass for Andover 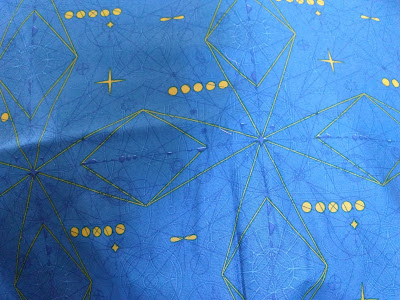 and "Science," a Timeless Treasures fabric. 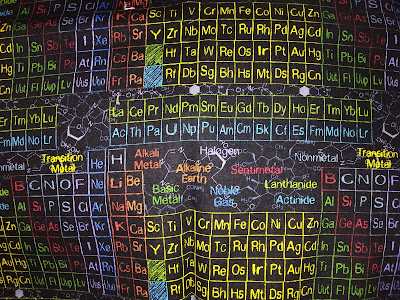 This one is, of course, chemistry's periodic table of the elements. I really like this one.
Unfortunately, the demands of my new job kept me from even starting this quilt before he passed away. But I still wanted to make it for his mother.
I reduced the size of the quilt from 63" x 83" to 63" x 63" by reducing the number of blocks to 25. Determining to make the quilt more "sophisticated," I created templates to add square root and pi symbols to the quilt, not just the basic math functions. I decided to complete all of the appliqué blocks first, and "accidentally" created double the amount of division blocks I needed, only to realize that, without the appliqué dots, they were actually the minus blocks. 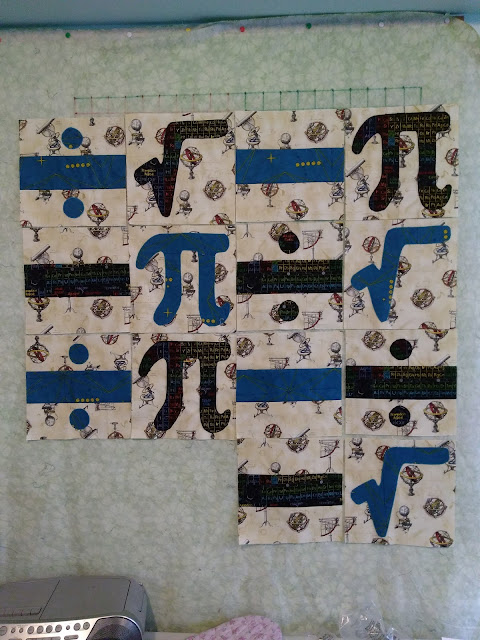 So, I had 4 out of the seven symbols completed. My job required commuting 40 minutes each way, and it was exhausting and demanding, so I didn't get this quilt done as promptly as I might have liked. 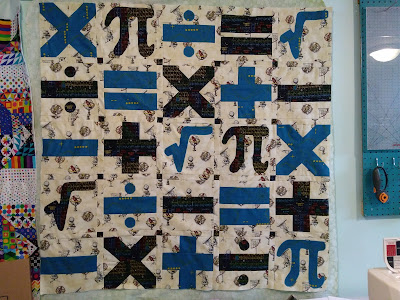 Especially when I had to wait first for the renovations to be completed and then the flooring issues in my quilting studio had to be resolved. 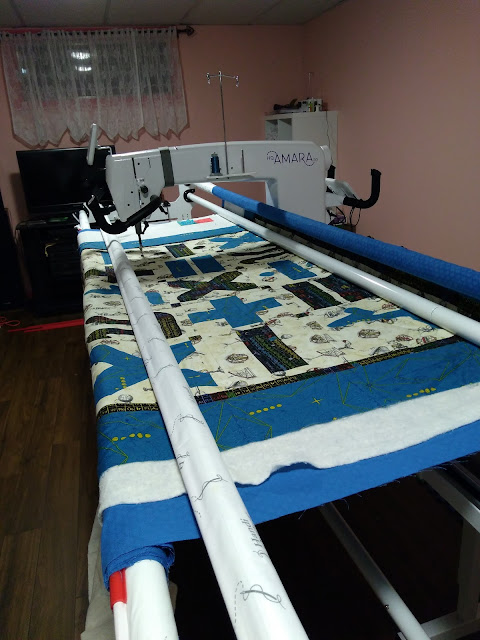 Finally, I had the quilt top completed and on the longarm. 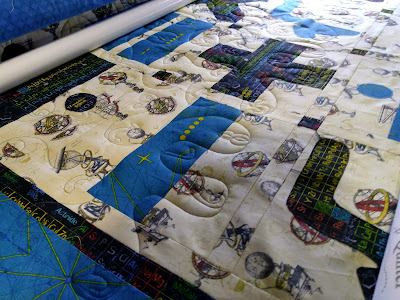 I chose Meandering Numbers from Willow Leaf Studio as the most appropriate pantograph (another hold-up: I also had to wait for the pantograph to arrive).
It's now finished. I just have to get the mailing address of the recipient so that I can get it mailed off to her.
So why did I choose this name instead of just "Math Quilt," as the pattern is titled? First of all, way back when my daughter was born, one of our neighbours was a university math professor. And he stated that he believed that mathematics is an art. And, in a certain way, I have to agree with him. There is a beauty in the symmetry and precision of math. It can also be used in various art forms, as any quilter can attest. However, it's also very important in the sciences, particularly chemistry and physics. And, of course, the fabrics used in this quilt reflect the sciences. Like my profession of nursing, mathematics is both an art and a science. And even quilting is both. So combining both art and science, I created a quilt that celebrates mathematics and the life of one particular mathematician.