It's a holiday weekend and I had great plans for getting lots accomplished at home: yardwork, housework, etc. But then my back decided to go out without me, and my ability to get much done went out the window. I will be paying my daughter to mow my lawn, and that's about the extent of any physical labour that will be accomplished around here. I was able to finish stitching the binding on this pillow and that means it's done. 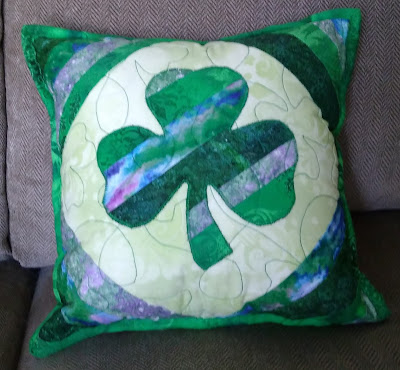 My goal is to work my way through this book, completing every project. Or at least my version of it. Completed today is the Shamrock Pillow, from pp. 102 ff. I made some major changes, some of which were not the most intelligent choices. Let me tell you about it.
The instructions say to stitch the strips of fabric together for the shamrock, but I opted instead to stitch them down onto a piece of muslin and then cut the shamrock shape out. After I had traced the shamrock onto the muslin, I realized that I was supposed to enlarge the shape first. I briefly debated on that, which would require copying it onto an enlarged grid. That was more time consuming than what I wanted. The other option was to make an enlarged photocopy of the pattern, but it would actually need two photocopies, as the shamrock was supposed to be 10-1/2" finished size, which wouldn't fit on one sheet of standard letter-size paper. No, I decided to keep the smaller shamrock and fill in the corners with more fabric strips. 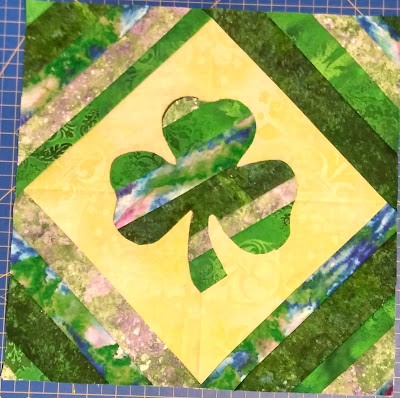 I machine appliqued the shamrock using blanket stitch, rather than needle turn applique, as instructed in the book. So far, so good. I have a pantograph called "Luck of the Irish," so I traced that onto gold quilting paper, and pinned the paper onto the pillow top after machine basting the quilt sandwich together. I'm not really a big fan of quilting on my domestic machine and haven't done it for quite a while, and the stitches came out uneven and "jerky." 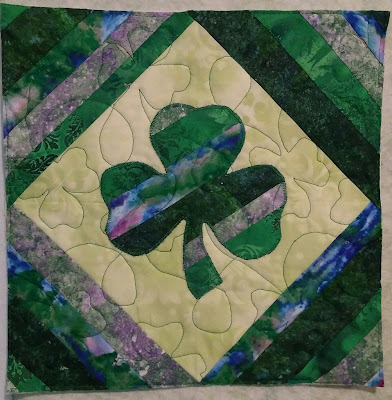 Nevertheless, it wasn't horrible. The book does not say to quilt the pillowtop, but I decided to anyway. as I prefer the finished look of quilting.
I debated on what to do for the pillow back, and remembered I had some extra pieces from the Celtic Ballad quilt (which may be given a different name by the time I've finished it). 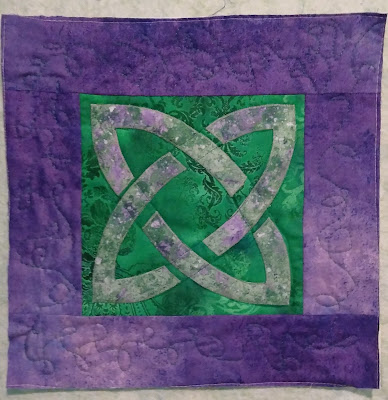 So I appliqued those onto a square of green, gave it a purple border and quilted it as well. I suppose if I quilted more on my domestic machine, I might get better at it. But since I rarely make pillows, and anything much bigger than a pillow gets quilted on the longarm, it's not likely I'll ever get very good at it. 😉
Then came time to put the pillow together. The book says to put right sides together and sew a seam that would go on the inside of the pillow. I opted to do an outside seam with binding. I stitched around the pillow, leaving an opening in the bottom to insert the pillow form. I considered whether I would machine stitch the other side of the binding in place before stuffing the pillow. I was concerned that it might be difficult to do once the pillow form was in place, but I was also concerned that it might be difficult to apply the binding to the opening if most of the binding was already in place. And I reasoned that I had made the pillow cover bigger to allow for shrinkage should I need to wash the pillow in the future. So, I decided to stuff it and then finish the binding. I was to regret that decision.
I had bought two pillow forms at a thrift store (washed before I used them). One was unpackaged, but I was "sure" the label on the other one had said 12". However, I had a real struggle getting that pillow form into that pillow cover. I tried the second one, thinking it looked marginally smaller, and ended up having to rip more stitches out to make the opening larger. Partway into this, I wondered if maybe I should use stuffing instead (I bought a LARGE bag, since I'm also working on a biscuit quilt) of the pillow form. I actually measured one of the pillow forms and edge-to-edge, it's about 16", not 12. Still I decided to stuff it in, another decision I was to come to regret. I now had to apply the binding to close the opening and turn and finish the binding on the whole now extremely overstuffed pillow. Try fitting THAT under your pressure foot. It didn't work very well and that's probably the worst binding job I have ever done. The opening was an even worse disaster - I just couldn't get the stitching close enough and through all the layers. It kept grabbing the very edge of the purple fabric on the back, leaving it frayed and loose. I tried zigzagging it, and still ended up with not all of the edges caught as firmly as I needed them to be. I ended up handstitching to at least hold it all in place until I could get the machine stitching done. I was finally able to get it done, with repeated problems catching the wrong parts of the fabric, resulting in puckers, and having to rip out stitches, and finally decided it was closed acceptably enough - albeit not really to my satisfaction. Meanwhile, I had run into continuous problems trying to machine stitch the binding in place. I tried different feet. I even considered wetting the pillow to squash the stuffing. I finally finished the remaining part (almost half) by hand. I wish I had done the whole binding by hand - it would have looked much nicer. However, I'm still pretty happy with my pillow, even if it is "morbidly obese."
Here's the back. 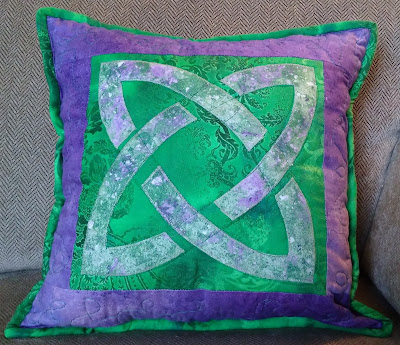 Hoping my back will feel much better by Tuesday as I have booked time on the longarm after work to quilt the Celtic Ballad quilt.