When I found out that Brad, the physiotherapist, is leaving the hospital where I work, I determined to make him a quilt. I asked the Rehab Assistant what Brad's favourite colour is, but he didn't know. So, one day I jokingly asked Brad, "Is blue your favourite colour? You seem to wear a lot of it." Yes. So, I at least had a colour to start with. I toyed around with different ideas of what pattern I was going to use, and finally settled on the Disappearing Hourglass 2. Here's the Jenny Doan/Missouri Star Quilt Company video tutorial.
I ordered a Timeless Treasures Tonga Treats layer cake in Lakeshore from Sew Sisters for the patterned fabrics. But I decided that I didn't really want all one colour in the solid fabric. So I purchased the Boundless True Blue layer cake from Craftsy, which is in different shades of blue.  I don't intend to ever use this pattern again. While the blocks worked up quite quickly, all of the edges ended up being on the bias. I don't know about the rest of you, but I have a hard enough time keeping my edges even without working with all bias edges. When you're working with stretchy edges and trying to keep your cuts even so that when you rotate the squares, the edges match up...
I also found that it was pretty much essential (at least for me) to have a rotating cutting mat. After mis-cutting two blocks, rendering them unusable, I finally ordered this one on Amazon
and set this quilt aside until the cutting mat arrived.
Even using the cutting mat, I still managed to ruin one more block because I had cut on the wrong line. I finally did what Jenny suggested and added tape on the correct measurement on my ruler. 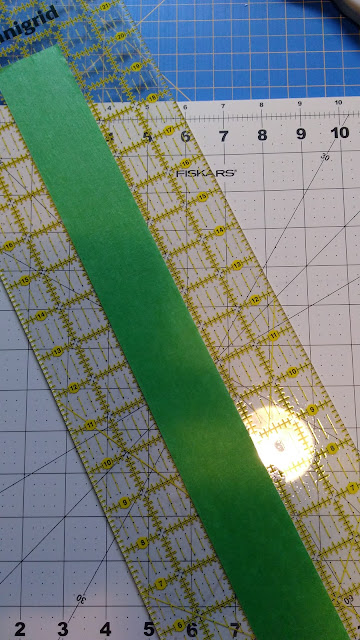 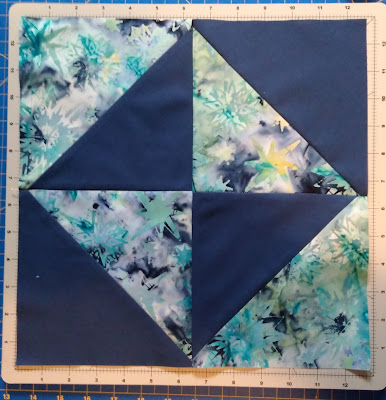 Another thing I found that worked better was to cut it the way Jenny does in the video, measuring 2-1/8" on either side of the centre lines. 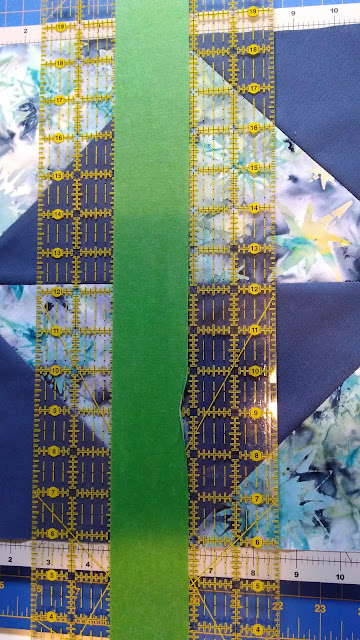 I have a hard enough time keeping my blocks square and even, but you add those bias edges, and it just wasn't working for me to measure from the outside edges.
Here's the block after cutting and rotating the squares that needed to be rotated, but not sewn yet. 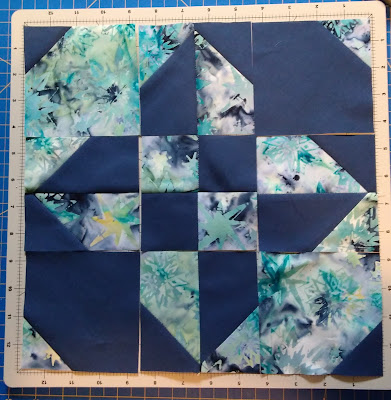 If you look again at the picture with Mystery on the quilt, you will see that I neglected to rotate the centre square on the 4th block on the bottom row. I never even noticed it until I took that picture. It might not be the same as the other blocks, but it still looks good.
After all those ruined blocks, it was a good thing that I wasn't planning on using the whole layer cakes in this quilt.
Once it was finished, I took it to the local park for a photo shoot. I then used Google Photo Assistant to make this video.


Tomorrow, I will give the quilt to Brad as this is his last week of work. We've worked well together and I'll miss him.
Posted by Laura B at 20:46