Friday the 13th was my "X" day, which is the nickname we give to our scheduled day off. According to our union contract, we get one 3-day weekend (unpaid) every 4 weeks, and mine was a good day. It partially made up for the fact that I was sick over Christmas and while I had time off, I was too sick to do much of anything with the time. Anyway, the weather had finally improved to the point where frostbite was not an imminent danger and I felt comfortable going into the city to get some errands run.
I was notified by my cell phone service provider that they would no longer be able to support the technology for my old flip phone as of January 31. So, that was my first order of business - I had to get a new cell phone. Believe it or not, I had to buy it at a grocery store. My provider started out running grocery stores, then turned to banking and finally to cell phone service. I had already tried to replace my phone on a previous visit to the city last month, but the store I went to only had flip phones. Seriously? Even though they might have more modern technology than my old flip phone, I was trying to get away from that. So the store I went in yesterday initially said they didn't have any phones. Then they started rummaging in a storage room as one of the clerks thought she remembered seeing some somewhere. Then they rummaged in some drawers and cupboards and they managed to find 3 cell phones. One was not for my provider (apparently they sell phones for other providers, as well). Of the other two, one was some generic brand that I didn't recognize and the other was a Motorola. I went with the Motorola. Now I can text people without having to punch the same button 3 or 4 times. And I can access the internet, do Instagram, read my email... Fun!
Next I went to Lori's Country Cottage. I had purchased something in their Stuff Your Stocking event, but had totally forgotten about it. I'm sure it was the Lord that reminded me about it, as one morning before getting up it suddenly came to my mind. But I couldn't remember what it was. Somehow I thought it was a quilting ruler - a rather expensive one, as I seemed to recall. Sure enough, it was the Stripology ruler, plus a Stripology book and a quilt pattern that I hadn't remembered at all. 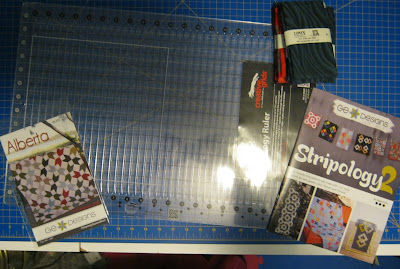 Plus I picked up some clearance fat quarters. I'm hoping the green will go with my Solstice Challenge blocks in case I need some fabric for finishing - sashing or whatever. And the good thing is, there's room on my pegboard for this huge ruler!
After finishing at Lori's, I decided to make what I thought would be a quick stop at a thrift store (Value Village). I was hoping to pick up a Fondue set as I want to try some of the fondue recipes from this cookbook:
I found one alright, but then decided to check out the book and craft departments. For whatever reason, there seems to be a scarcity of quilting books in the thrift stores lately. Maybe because I've bought them all already, so I didn't find anything on the bookshelves. However, the craft department was another matter. I just had to rescue this from the thrift store: 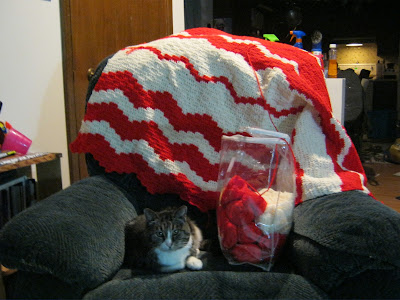 I think a crafter must have died or moved into a nursing home as, in addition to this unfinished afghan, I found another (uglier) one that was a bunch of granny squares made up but not sewn together and a bit of yarn - it was hard to tell as it was in a sealed bag. There was a smaller bag with finer white yarn and what might have been some granny squares as well. I was able to pass those by, but this red and cream one was calling to me. It's Canada's 150th "birthday" this year and I figured the colours were about right for a sesquicentennial afghan. And I decided to finish it in honour of the anonymous crafter who had to give up her craft. However, it's kind of curious. The final row completed seems to have ended in the middle of the row. 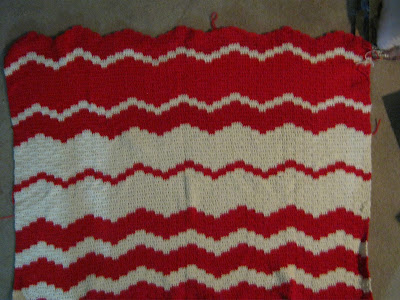 You can see the loop at the top where the row ended, but it appears to be a complete row, so how the yarn ended in the middle is beyond me. The yarn in the bag is a Sears Sayelle. And the bag itself has a Sears sticker on it The yarn label has French as well as English, so I know it came from Canada. Because it's "Sears" and not "Simpsons Sears," this afghan kit would have likely originated after 1978, when they dropped the "Simpsons." If anyone knows this pattern, I would appreciate hearing about it. It certainly would save me trying to figure out the pattern on my own.
Also in the craft department were a bunch of older knitting and crocheting books, which I figure had also belonged to the anonymous crafter. Most of them were too dated to bother with, unless I wanted to sell them as antiques. If I had a craft store, I would buy them for a display case. I do love vintage stuff, but one can only accumulate so much before it becomes a clutter burden. I did pick up a few of the books. 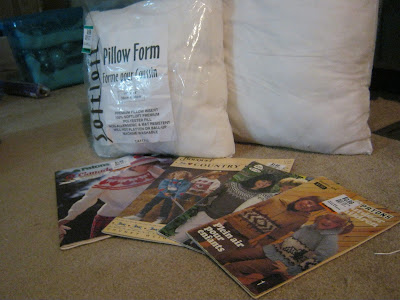 One of them is specifically Canadian knits, so that will make for good projects for this "Sesqui" year. The pillow forms in the back I intend to use for pillow projects from the 50 Country Quilting Projects book.
You might recall that I took a quilt embellishment workshop in September. 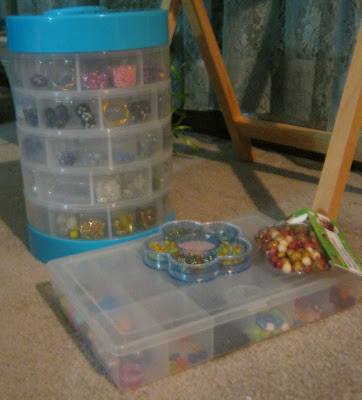 I was able to pick up quite a few beads to use to embellish my quilts. Not sure how realistic that idea was, however. I'm lucky to get time to get the quilts quilted, let alone sewing beads on them...
A couple of little sewing kits caught my eye because of all the notions in them, plus a "vintage" sewing basket that I intend to keep in my travel trailer - if I don't sell it in the meantime. The trailer, that is. I'm not a big fan of towing and I'm not sure if I'm prepared to invest in paying for a seasonal site for it. Plus, if I sell it, I could put the money towards a Longarm! Something to consider.

In the front of the above picture is this weird thing: 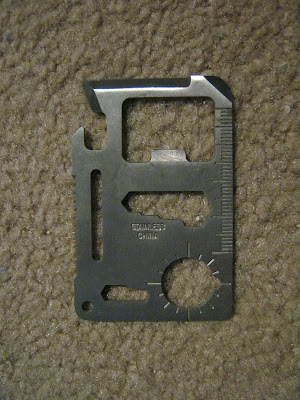 It was in the bag with one of the sewing kits. If anyone knows what it is, please tell me. I have no idea. At first I thought it was some kind of throat plate, but the upper left part is a cutting blade.
Amazing what you come up with when all you were planning on buying was a fondue set. And the fondue set that I did end up buying didn't come with fondue forks, so now I'll have to look for them.
My next stop was Costco, where I was just going to buy a couple of bags of walnuts. I also thought my membership was up for renewal, but they didn't mention anything about it when I checked out. Which was a good thing. Those two bags of walnuts ended up costing me over $140. Interesting how that happens at Costco (yes, I need that, too, and I think I'll try that, and...). Unfortunately, the Moroccan Style Chickpea soup that I bought a case of didn't turn out to be delicious. I wish Costco would sell sample cans so that you can first determine if you like it well enough to buy a case of 8. Hopefully, the lentil soup will be better.
My final stop was the mall where I had lunch. I had neglected to take my water bottles along, even though I had them by the door when I left, so was very thirsty by the time I got to the mall. I got 2 - 591 ml water bottles with my lunch. That's 1182 ml or over 5 cups. And I had it all gone by the time I was finished lunch. My dehydrated body must have just soaked it right up because I didn't even stop for a potty break on my way home. LOL!
Posted by Laura B at 20:08