It was a great day at the Creative Stitches Show in Edmonton. As usual, I spent too much money, but I don't have a husband to tell me not to. LOL! This year my niece, Julie, joined me, so that doubled the fun. We drove separately because she had constraints regarding her children's school day, but we managed to find each other using our cell phones. When she decided to go as well, I told her to bring a lunch. I don't remember what my rationale was for not eating at the café in the show's location, whether it was because the lines were too long or because they didn't have any vegan/vegetarian options, but I ended up eating junk food from the vending machine. :-( This year I determined to do better than that and took a lunch along. I decided to try Curried Tofu "Egg Salad Pitas" from this cookbook:

Honestly, I've had this cookbook for at least a year (probably longer) and this is the first time I've tried a recipe from it. Too many cookbooks, too little time. It was very tasty - the Curried Tofu Egg Salad that is, not the cookbook, so I will no doubt be sampling more recipes from this book. And while the title says "Vegetarian," as far as I can tell, it's totally vegan. Now that I've given my vegan commercial, back to the show...
The show starts at 9:30 in the morning. Last year I arrived around 9:00 and didn't have any problem finding a parking spot. My big pickup truck requires a lot more maneuvering room than a small car. This year I got there at 9:20 and had to park at the far, far end of the parking lot. Julie, who arrived later, ended up having to park in a different lot entirely.
The first items I bought were this book:
(I love table linens and I love nature, so this book was a win-win for me, especially since I got it for only $10).
And this Aurora Borealis panel for only $3: 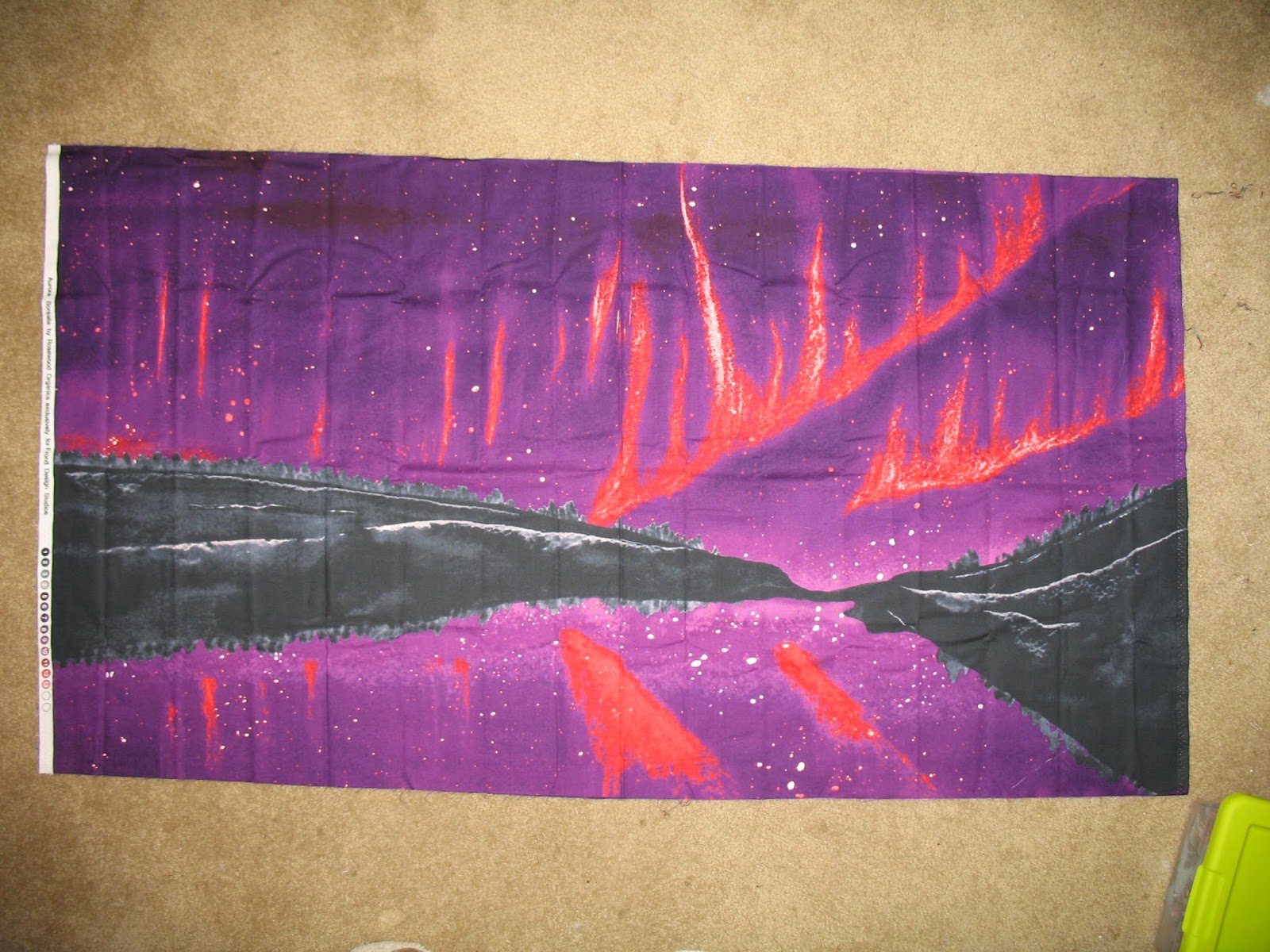 There were several colour selections for this panel. but, of course, I chose purple. Simply gorgeous! 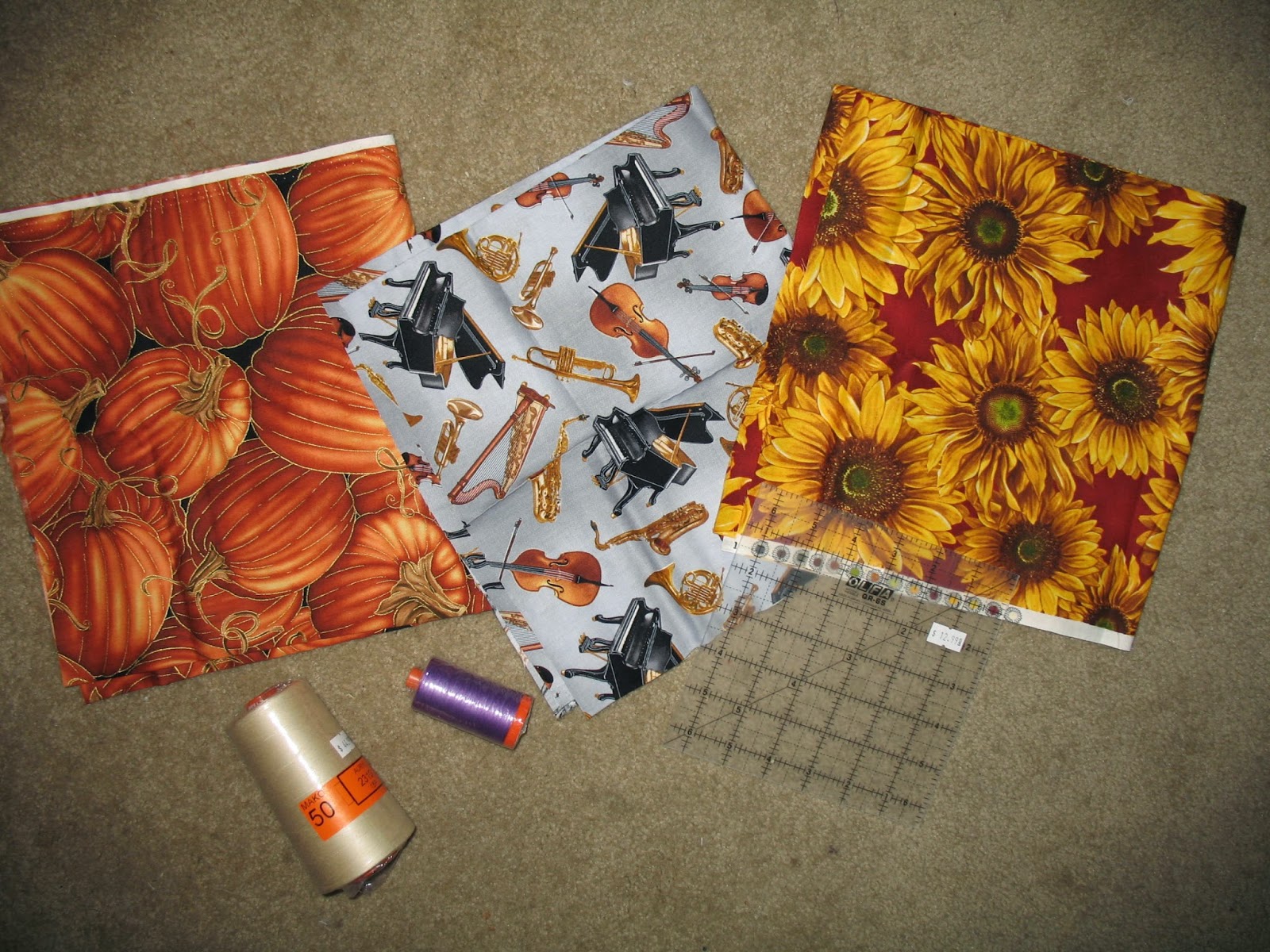 Lots of good deals on fat quarters and these ones appealed to me. I managed to find the Aurifil 2540 (the purple spool) that I need for topstitching my 10-minute blocks, and the same vendor also had beige in the large cone. Then, because I was spending more than $50 at this booth, I was able to buy the 6-1/2" ruler for $1.99. I didn't really need one, but it's the non-slip one and I sure couldn't beat that price! 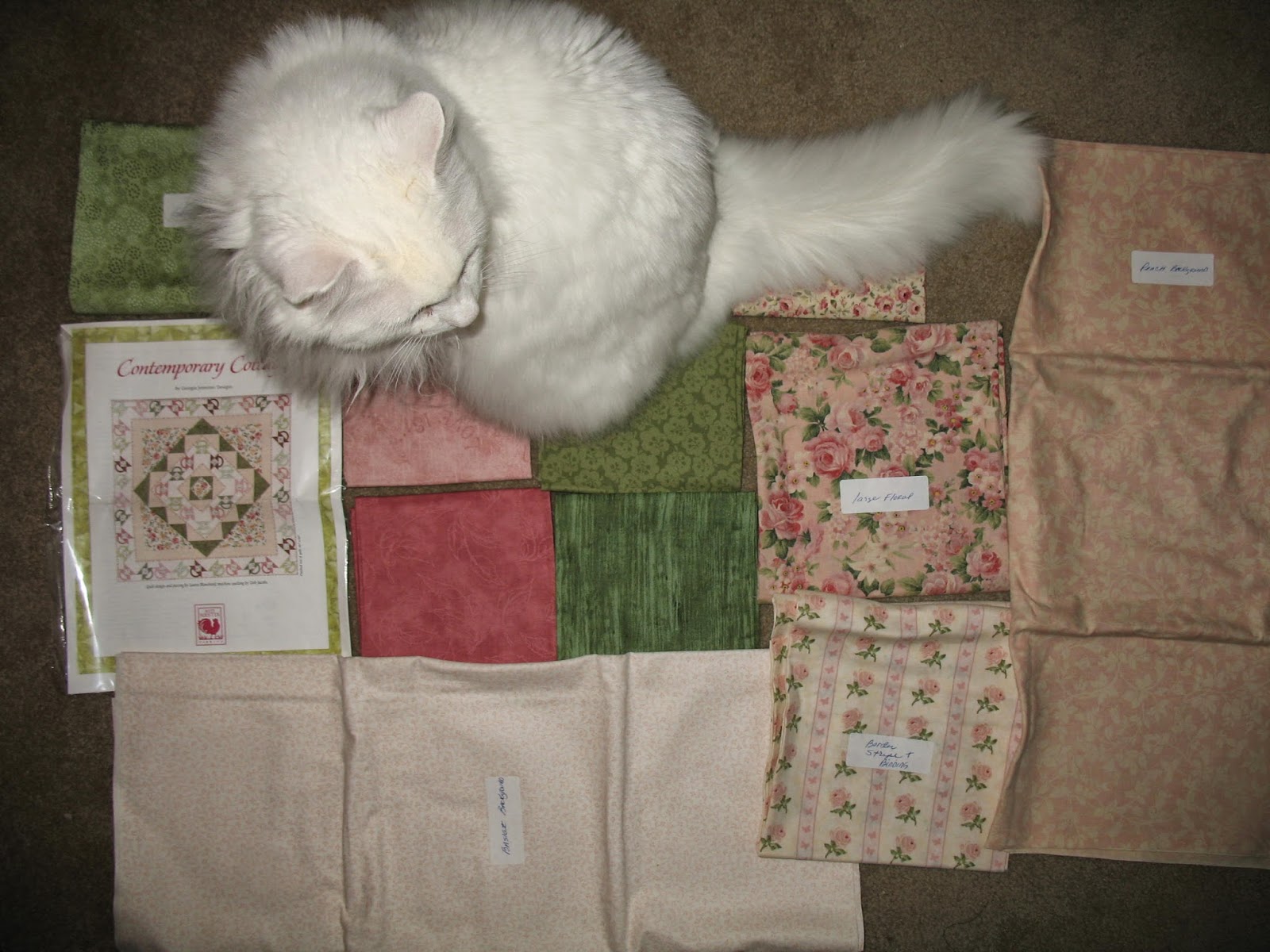 I got this quilt kit for half-price. If it was made of ugly fabric, I wouldn't have purchased it, but since it was very pretty and I liked the pattern, that was a deal too good to resist. Mystery is impressed as well. If you're interested, you can find the pattern here: Contemporary Cottage. 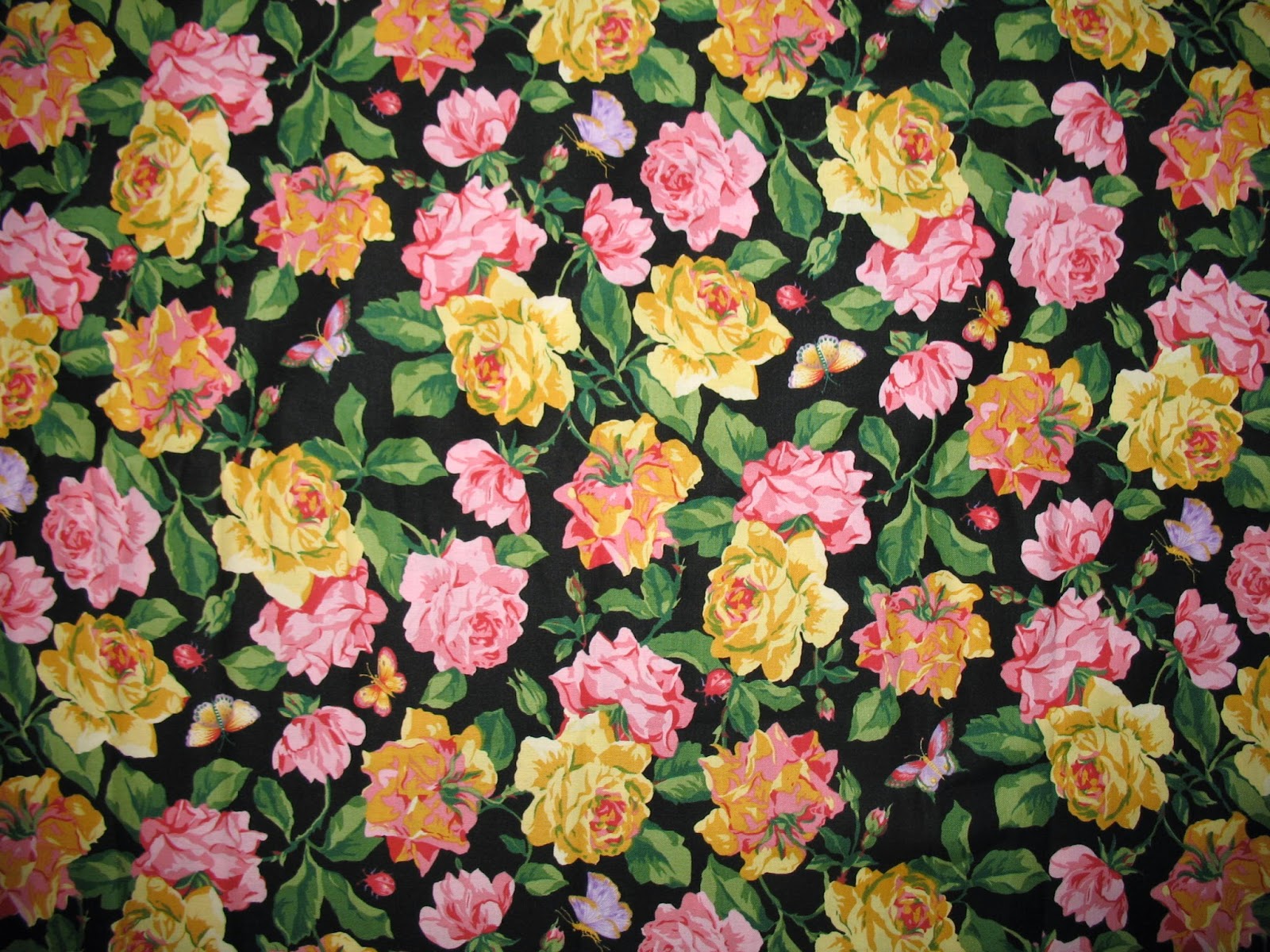 I actually bought this fabric to use as backing for the above quilt kit. But I also have another quilt in my "back burner" quilt plans that it might be appropriate for as well. 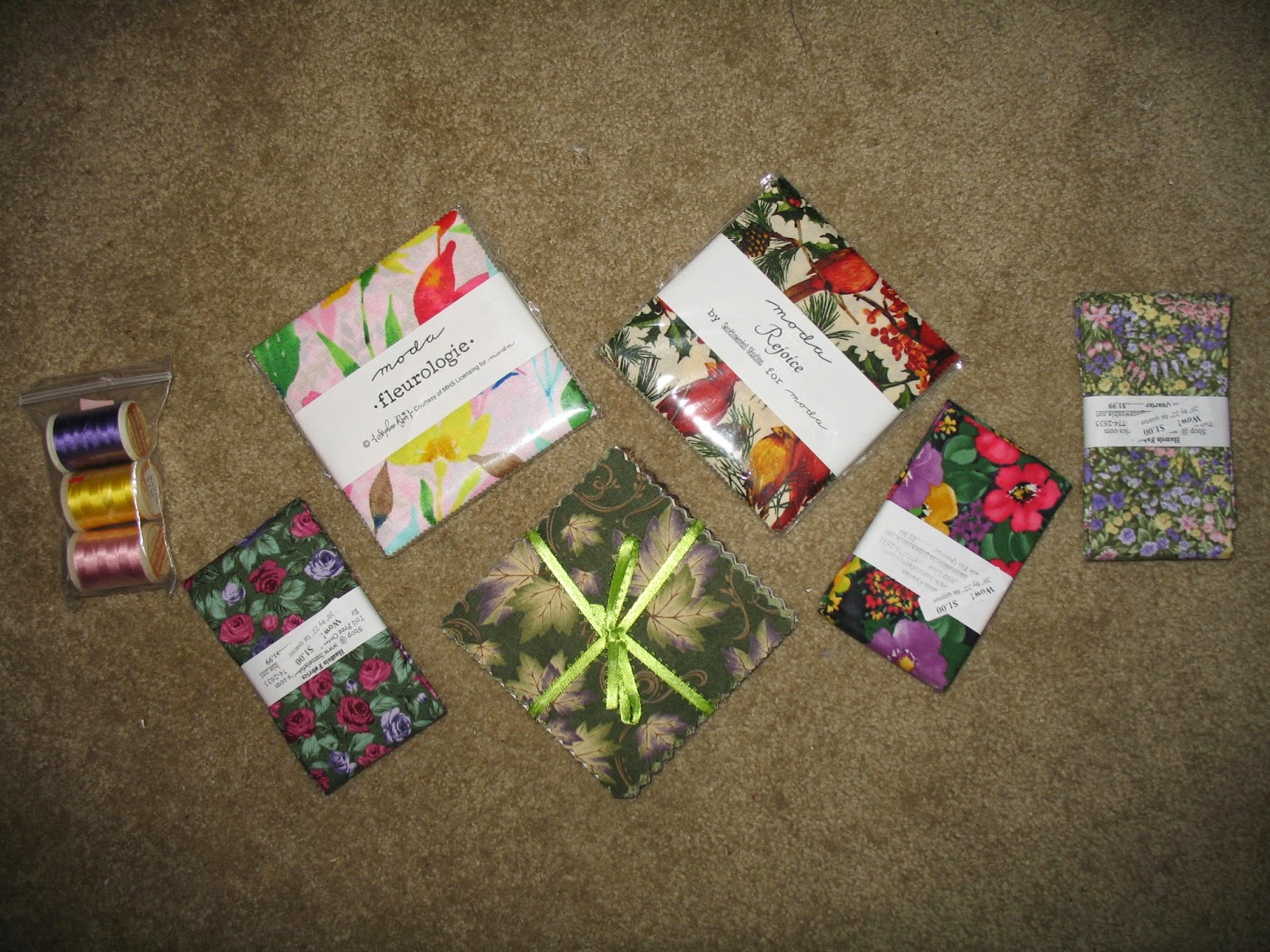 Good deals could be found on every hand. More fat quarters - these ones were $1 each! Some charm packs, plus some rayon thread that I will use in my machine quilting course. I just love the Moda Rejoice charm pack. And the wonderful thing about buying at the show is, not only can I find good deals, but I don't have to pay for shipping! 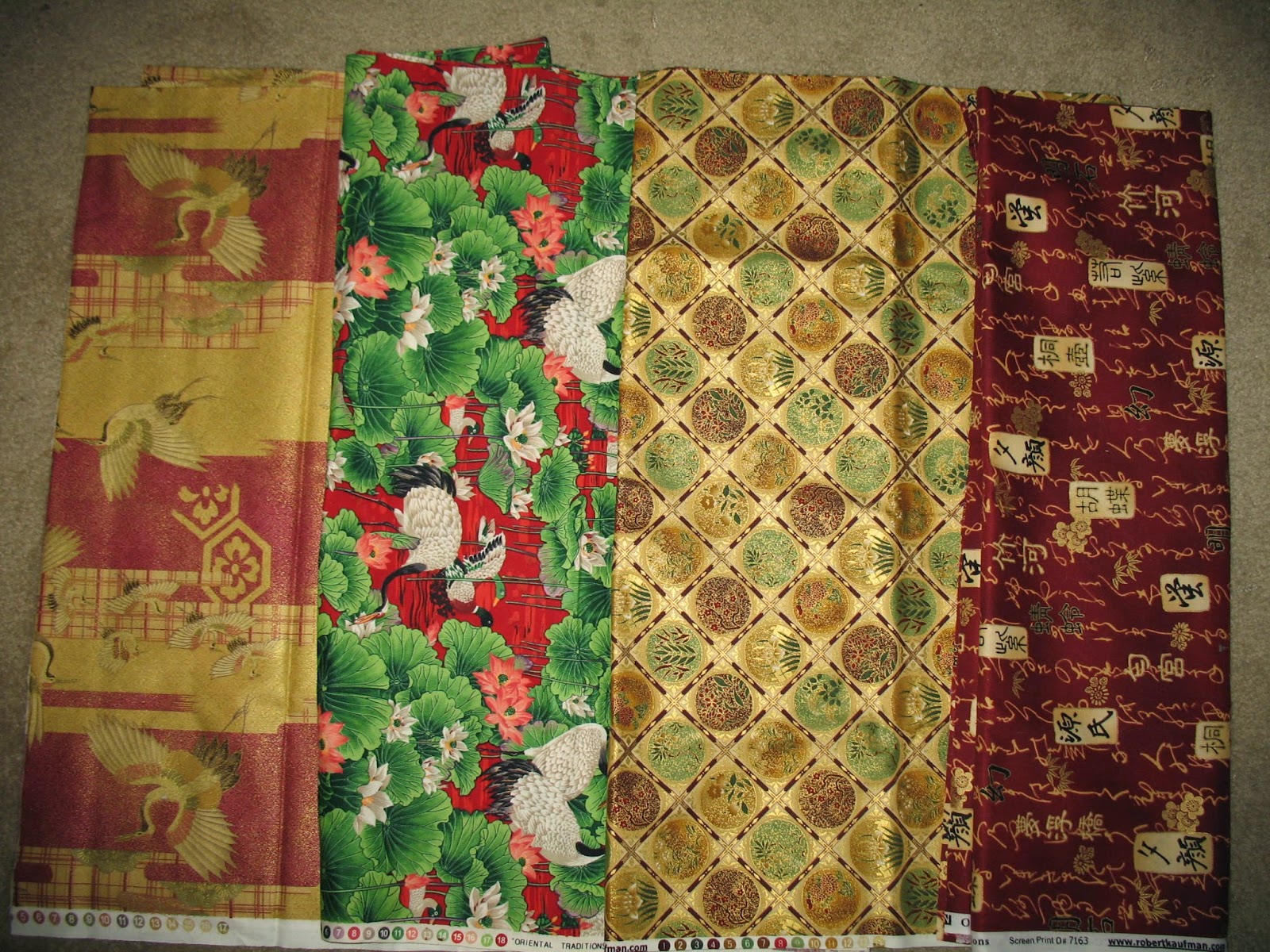 Recently, I purchased Fons & Porter's Asian Influences quilting ebook, so this bundle of 1 metre cuts will be put to good use. 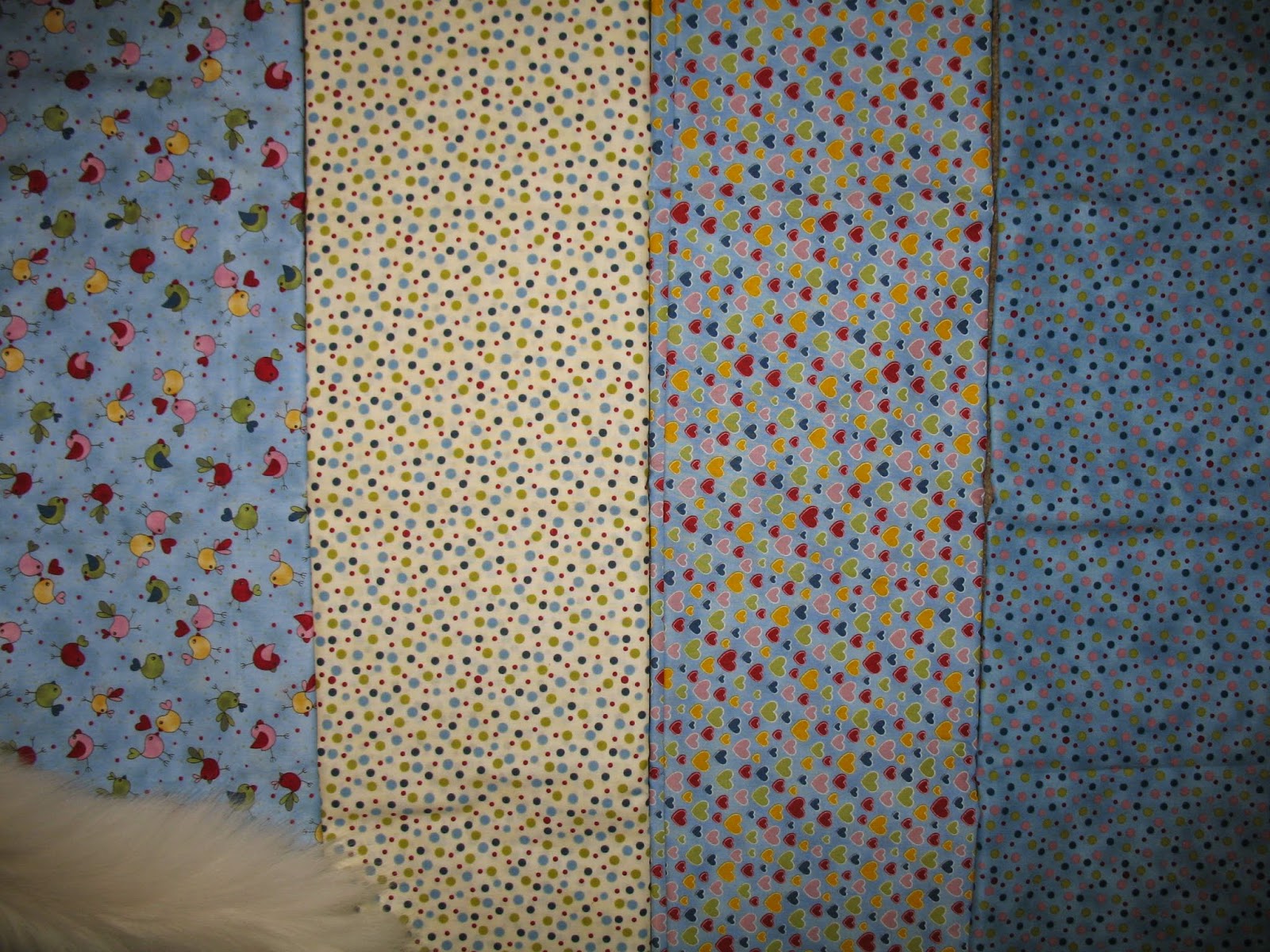 The wife of one of my nephews is expecting a baby in February. I have a girl's quilt made, but I need a boy's quilt as well, just in case. That's where this bundle of 1 metre cuts will come in handy. (You can see Mystery's tail in the lower left as he continues to test my new purchases).
While at the show, I introduced Julie to Sparrow Studioz and longarm quilting. I have offered to pay for her to take the longarm quilting course as a combined birthday/Christmas gift. She's still thinking about it, but I'm sure she'll become addicted as I am, once she tries it.
That's it for the show for this year. I left Julie exploring the scrapbooking booths as I wanted to drop off my Janome MC 8000 at Johnson's Sewing Centre for servicing and get out of the city before rush hour. While there, I purchased a couple of quilting stencils and a roll of quilting paper for my machine quilting class, plus some more Janome bobbins. Naughty me - I have been using some generic metal bobbins and I have been wanting to purchase the genuine article, but I can't find them in town. I have to go to the city to a Janome dealer. After getting my wrist slapped by the service technician telling me that using those bobbins could cause problems with the tension (or was it the timing?), I had extra incentive. 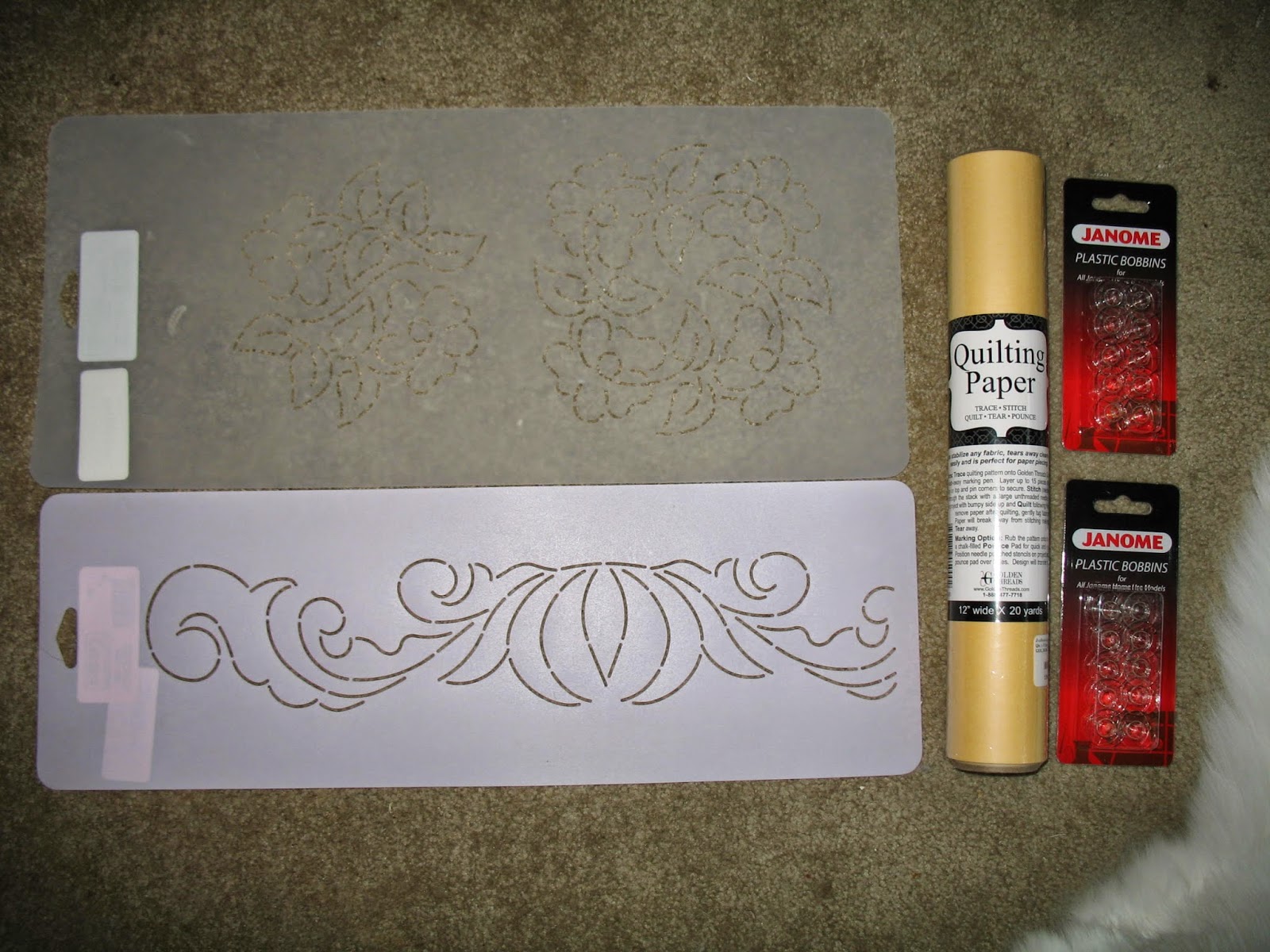 (Mystery's in the lower right this time).  I noticed after I took the picture that the pumpkin stencil is upside down. The top stencil is not very clear, but it's poppies.
I realized after I left the show that I still didn't get to the Copperfields Bookstore booth. I never got there last year and failed to again this year. But where was it? I looked at the map and realized why I missed them. They were way at the back past the scrapbooking, stamping and jewelry booths. Because those aren't my hobbies, I don't usually bother going back that far. Next year, I will have to do so. But I'd already spent more than enough money. It would have been easy to spend thousands at the show. I just need to marry well so that I can afford to. LOL! I've already decided that I want an APQS Millenium as an engagement gift. Who needs a diamond ring?