The bad news is I never made it to the Edmonton Festival of Quilts today. Well... I suppose I should start by telling you that I drive a pickup truck, which will come as no surprise to those of you who have been reading my blog for sometime. And not just a little pickup truck. This is a full-sized, extended cab, standard box, 4x4 pickup truck with a V8 engine. Not only that, but it's not just a beat-up old farm truck. It's a 2011 Chevy Silverado in laser blue metallic, a gorgeous purply-blue colour. You know how some men feel about their cars? Or if you live in the west, about their pickup trucks? Well, that's pretty much how I feel about my pickup truck. I even like the way the engine sounds. The only drawback is that, being a rather large vehicle, it's not very easy to park (and it gets terrible gas mileage). And being as I'm rather particular about my truck not getting scatched or dented, I avoid parking in crowded areas. 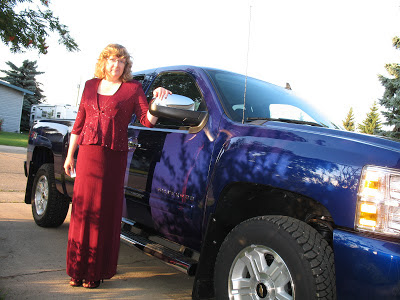 I arrived at the site where the Festival of Quilts was being held. And the parking lots were full. And the streets were full. Cars parked on both sides of not very wide streets. I swear if I'd had the towing mirrors on the truck, it would have almost touched the vehicles parked on both sides of the street as I drove through. Not enough room for two vehicles to pass each other. And I drove on through looking for a place to park and finally came to a section of the street where I could park the truck, quite far from the site. But then I thought that, with all that traffic and so many vehicles parked on the street and not much room to get through, someone might hit my truck. And I decided to park at the nearest mall instead and walk to the quilt show, which was probably not much longer a walk than from where I could have parked on the street anyway. On the way to the mall, I got to wondering what I would do if I bought stuff - lots of stuff, heavy stuff - at the quilt show and had to lug it all the way back to the mall. And what about the crowds? As my best guy pal, Phil, who was with me said, we would have been shoulder to shoulder. There were an awful lot of cars for the size of that hall. I really don't do crowds. So, all things considered, I decided not to go to the Festival of Quilts. I'm disappointed, but feel I made the best decision for me under the circumstances.
Phil had never intended to go to the quilt show. He was just going to go to the mall. Instead, we both went to a thrift store, where I found the book Quilting Shortcuts by Maggie Malone. I might already have this book (still have some books in boxes in the garage) or maybe I borrowed it from the library, because it looks familiar. But it also looks good, and as Phil pointed out, it would cost me a lot more than the $8 the book cost to drive back to buy it. You can see the book in the lower right of the picture below. 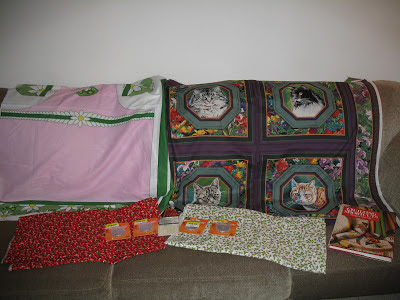 We then went to Fabricland, where I bought the 4 pieces of fabric in the picture. On the upper right is a panel for a pink John Deere barbecue apron. I intend to make this up for my niece's birthday. I will probably back, batt and quilt it. In my opinion, the fabric's not thick enough for a decent apron otherwise. On the upper left is a pillow panel that I couldn't resist, being the cat lover that I am. The fabrics in the foreground don't show up very well. The one on the left is a poppy print and the one on the right is a rosebud print, both for future quilting projects. On top of the fabric in the middle is a package of clear fabric grabbers to put on the backs of my quilting rulers. I've had too many "slips" ending in uneven cuts, and sometimes useless strips of fabric.
I also hit a Staples to buy toner for my printer. It was almost out - kept taking it out and shaking it up to get a little more life out of it- and I need to be able to copy patterns for my Quick-Strip Paper Piecing Class.
The good news, at least quilting-wise, is what's in those 4 orange packets sitting on the fabric. After I had dropped Phil off and was on my way out of the city, I stopped at a big WalMart (at least bigger than the one in my small town) just off the highway to see what they had in quilting supplies. I was quite disappointed. I believe there was less fabric than in our WalMart and no quilting rulers, where our WalMart has a reasonable selection of different quilting rulers. It was kind of puzzling to me. Then I looked on their clearance shelf in the craft section and found 5-packs of Fiskars rotary cutting blades for only $10 each. That's only $2 per blade. Here in Canada, those 5-packs are normally over $20. Yippee! So I bought all four packs that were there.
Yes, disappointed that I didn't get to the Edmonton Festival of Quilts, but happy with my purchases, especially those blades. That should do me for awhile...
By the way, I'm constantly meeting new quilting friends on Google+ and getting new ideas from their blogs. Come and join the link party at