When I have shown a new quilt block to my youngest sister, Cindy, either on facebook or Skype, she has often hinted that she would like a quilt. I finally told her that she is on my quilting agenda. She will celebrate her 50th birthday next year, and what better occasion to gift someone with a quilt? That also gives me sufficient time to get it made. So, in the back of my mind, I have been mulling over quilting ideas, nothing serious and definite, as I've got other projects currently on the go, but it's been there stewing... She lives in Nova Scotia, loves the ocean and her favourite colour is blue. A nautical theme, perhaps?
I found definite inspiration when Rose Smith of Ludlow Quilt and Sew posted the new Ocean Waves Fabric by Fabric Freedom (http://shop.ludlowquiltandsew.co.uk/ocean-waves-shells-200-p.asp). I won't necessarily use this fabric, but it does give me an idea of what's available. And it's beautiful fabric.
Jen of Quilts by Jen, writes on her blog about finding quilting inspiration in random places like the tiles on the wall at a local Tim Horton's (http://quiltsbyjen.ca/inspiration-found-at-tim-hortons/). I didn't think I'd been quilting long enough to get inspired at Tim Hortons, but the other day I did have a serendipitous moment at home, sitting at my dining room table. I had a Canada's History magazine open on the table to an article I had been reading on the Bluenose: 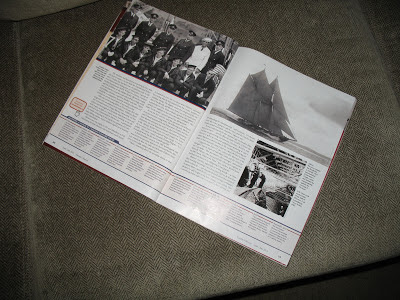 Glancing at that picture of the Bluenose schooner was my "aha" moment. Cindy and I both love Canadian history and this schooner is part of our history and is even featured on the Canadian dime. And it's home base is Nova Scotia, where Cindy lives. Its history is too detailed to go into here, but if you're interested, you can check it out at the Nova Scotia Archives.
I am currently enrolled in Craftsy's Pictures to Pixel Quilts class, which is one of their free classes. The demonstration quilt was a picture of the instructor's eye, which I really didn't find inspiring. So I started working on a picture of a hydrangea that I took at Muttart Conservatory, but it hasn't made it off my computer yet. I haven't gotten past coding all of the colours. It's quite tedious. And I didn't have a specific purpose for this project, other than learning the technique, so it was no big hurry. However, when I saw that picture of the Bluenose, I figured it might make a perfect pixel quilt. Actually, unless I want to do the quilt all in shades of gray, it will have to be the Bluenose II as I don't think any colour pictures exist of the original Bluenose. So, here is the Bluenose II, thanks to the Nova Scotia Archives, in all her glory: 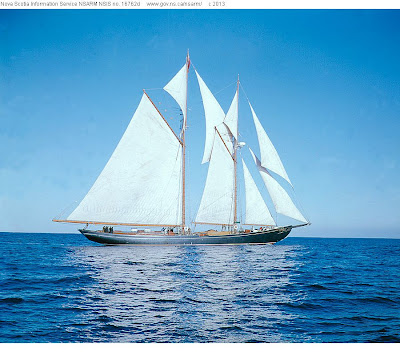 Isn't she a beauty!
No promises that this quilt will ever see the light of day. If I can't make it recognizable as a schooner and not just a random bunch of blocks, then I won't do it. And I don't want to do it in 1 inch squares. Even 2 inch squares I figure will take nearly 2000 squares to make a double quilt. Thanks to Pic 2 Pat, which is actually a cross stitch site, I have the following pixelated version: 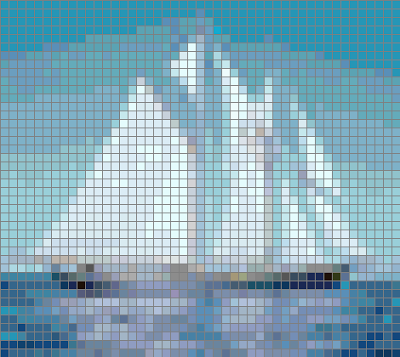 This Pic 2 Pat is really a great site, whether you're into cross stitch or pixel quilts. And it's free! It gives you a wide range of options for the final product, so that you can change the size of the picture and the number of different fabrics (or floss) that you need and what the picture will look like with each. You get more detail in the final product with a bigger picture, smaller squares and more different colours. If I tried it with fewer squares (which would also mean bigger squares to work with), the detail wasn't as great and the Bluenose II was more like blobs of white on a blue background, more like a modern art schooner, which is not what I'm aiming for. This looks good in this size, but how good will it look in a full-sized quilt? This version has 68 different colours, which will require an extensive fabric stash and quite a bit of coordination. Pic 2 Pat also produces a black and white schematic, so it's easier to figure out what fabric goes where. I'll still be mulling over whether I can make it work, and to determine if it will be worth stitching together nearly 2000 2-inch squares of fabric.
As I was proofreading this blog, I had another "Eureka" moment: I could do the centre of the quilt with the above picture in 1 inch squares, then surround it with nautical-themed blocks and a seashell border... still in the mulling stage however... Nah, I don't think so - that will mean 2000 1-inch squares and still have blocks and borders to complete as well!