Went to a regional camp meeting today.  (See Wikipedia's article Camp Meeting if you don't know what a camp meeting is). Too tired to stay the whole day. It's been a busy week.
As I first walked in the door, I entered just behind a man whom I didn't know. The woman greeting at the door asked me if I belonged to him. I replied that I belong to no man. She was only asking to find out if she needed to give both of us a copy of the program bulletin...  LOL
My ex-husband was there as well. He sat with me for lunch. As he was about to sit down beside me, I teasingly said, "If you sit there, you might start rumours." Sure enough I was questioned several times on whether we were getting back together... Well, that really doesn't bother me, but I don't plan on going into details on why that's not going to happen. I can jokingly tell people that we get along better when we're not married (which is true), but I don't feel it's productive to bad-mouth my ex-husband. Suffice it to say that the problems have not gone away and, as a wise pastor once told me, forgiveness does not mean you need to give the person the opportunity to hurt you again. We share a daughter and I choose to stay on friendly terms with him for her sake. Besides, life is too short to hold grudges. However, people have no idea what went on in my marriage, so they shouldn't be hoping we would get back together. Maybe the fact that I left camp meeting early and he didn't will put the rumours to rest.
Got a rather outrageous compliment at camp meeting as well. I was standing by the doorway into the sanctuary (main auditorium) of the church where the meetings were being held. A man that I might have slightly recognized stopped as he was entering the sanctuary to tell me, "I hope I won't give you a swelled head or create a stumbling block for you, but green must definitely be your colour because you look really good in it." Here's how I looked: 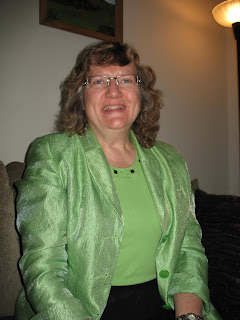 I admit that this particular green is one of my favourites.
As I was setting up the tripod to take this picture, Mystery, one of my QIs (Quilt Inspectors) decided he was also a tripod inspector. He smelled the legs, chewed on them a little and then indicated his approval by rubbing against them... And then sat in the middle underneath it once I got it set up. Here's my boy sitting on the back of my chair (and yes, my hair is wet): 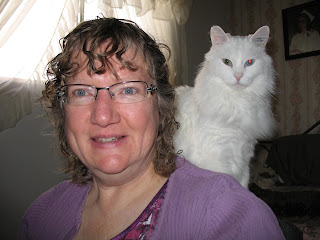 Right after lunch, we had a heavy downpour, which every good Adventist knows is camp meeting weather. I have joked before that if the farmers need rain, they just need to ask the Adventists to have a camp meeting... In the afternoon, a friend played Via Dolorosa on the violin. Love that piece and loved her playing. Then the daughter of another friend was baptized. Headed home not long after that. Alberta is the only place I've ever lived that I recall finding it prudent to wear sunglasses in the rain. It can be sunny and raining at the same time. Yes, the raincloud will be overhead and the sun is farther over, but still bright enough to wear sunglasses. I wore them on the trip home, till it fully clouded over. Then the downpour got so bad that I had to slow down and switch my windshield wipers into high gear. After that it cleared up enough to put the sunglasses back on.
When I got back into town, in light of the flooding down south, I decided to look at the river here in town. It's such a small river that I'm not even sure why it's even called a river. Back home in Ontario, we've got creeks bigger than that. However, from what I've been told, it did flood back in the 70s, though I really have a hard time imagining that happening. And it was well below the top of it's banks when I checked today. Sure, it was more than its usual trickle, in light of all the rain we've been having, but no danger of flooding there. Ditto for the trout pond in the local park. I honestly was not worried about it. I checked the river more as a joke than anything.
Currently, I am living in a construction zone, which is not much fun. Noise, traffic. And my neighbourhood is like an obstacle course. Getting to and from my home can be a challenge and I've had to do some creative rerouting. Pylons, piles of gravel, equipment, construction company vehicles and workers. They're tearing up and replacing what I thought were perfectly good sidewalks. When I questioned one of the workers about it, he said something about them wanting them all of a consistent height for when they pave the streets... Oh joy, street paving should be even more fun than sidewalk replacement. I actually considered riding my bike to work Friday afternoon to facilitate getting around the obstacles, but I wanted to go to Wal-Mart after work. And Wal-Mart is a little far for a woman who hasn't been on a bicycle in a few years, not to mention the fact that I have no place to carry what I was going to buy. So, I ran the gauntlet with my pickup truck again. Hopefully, the whole process isn't going to take too long. I can't imagine how they're going to work the paving part when people have to get to work. And I don't have alley access from my property, so it's not like I can just choose to go the opposite direction down the alley to exit on a different street. It certainly would have been nice if the town had actually informed us of their plans before they started.