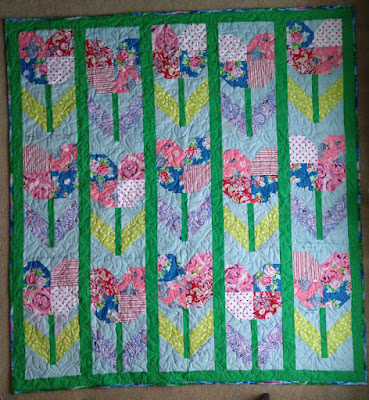 I'm calling this a nacho quilt, as in "Nacho favourite quilt." At least, it definitely is not mine. (Nacho = not your). It's not bad enough to rank as a Bodley quilt, but it lacks that pizzazz, that zing, that wow factor that I like to see in my quilts. So, I've coined a new term for quilts that fall somewhere between Bodley and Wow: Nacho.
I was looking for a quilt that I could work up quickly for a friend/work colleague that is going through chemotherapy, and I was hoping for a tulip quilt because this friend is of Dutch lineage. While I definitely feel that the leaves are out of proportion to the flowers, I really didn't dislike this quilt when I saw Jenny Doan's tutorial on YouTube. However, I think even hers is a nacho quilt. If I'd had more time, this definitely would not be my first choice for a tulip quilt.
Once the quilt top was done, I took it to work to get the team to sign it with messages of hope and encouragement. If you look closely at the above picture, you can see some handwriting on the quilt.
Then I had to figure out what to do for backing and binding. I was planning on going into the city to find something, but started looking through my stash, and found this. 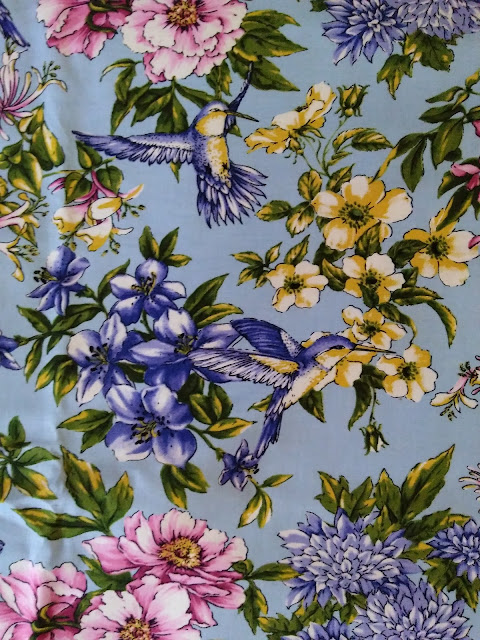 And there was enough for a backing! Frankly, I think the backing is prettier than the quilt top.
Mystery assisted with cutting the batting. 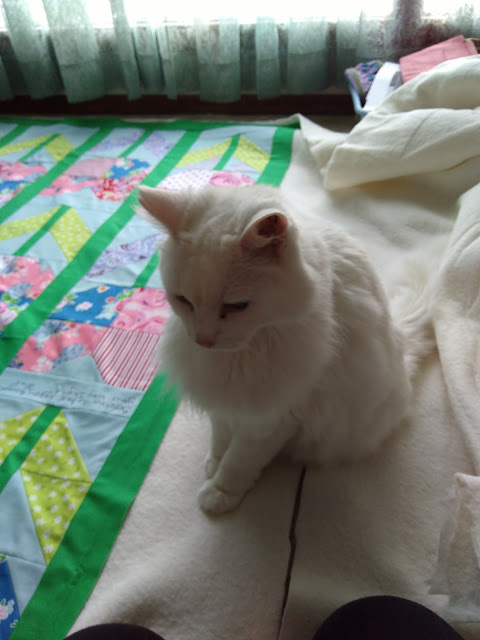 Actually, he hindered rather than helped, sitting right on the cutting line.
I would have liked to quilt with a tulip pantograph if I had one. Then I remembered that I had a pantograph with hummingbirds, called Columbines with Hummingbirds, by Deb Geissler. It comes with two borders - one of columbines alone, and one of hummingbirds alone. But with both borders, it made the pantograph so wide that it didn't fit my pantograph shelf. So, I cut it apart, with the 2 borders in one piece and the main pantograph in the other.
I was a little concerned as to how the hummingbirds would turn out, but was quite pleased. 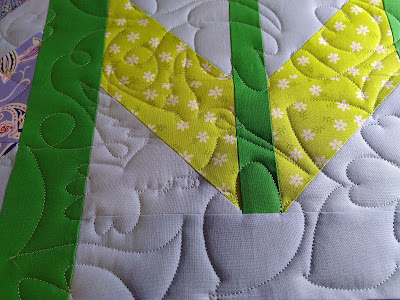 And here is one of the columbines. 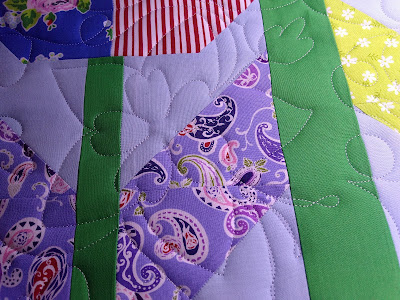 Now that it's quilted and bound, I'm feeling better about it. Although it is still a nacho quilt.