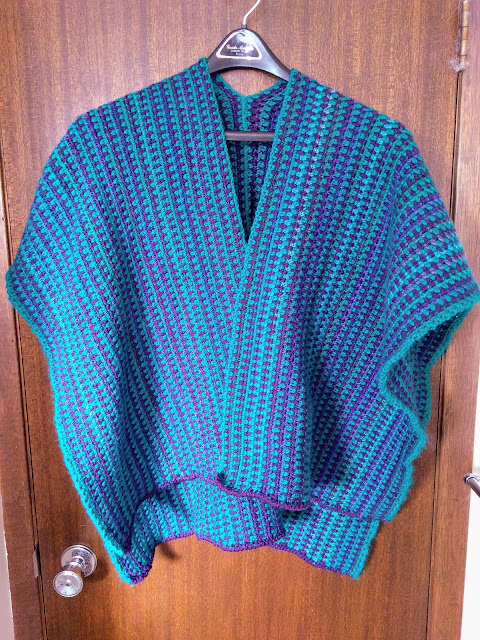 I really want to have fewer projects lying neglected around my house, so am attempting to get old projects finished (somewhat successful) before I start new ones (not so successful). I don't remember when I started this About Town Ruana for my daughter, but it is finally finished. Not soon enough for this past Christmas, but in plenty of time for her birthday in September. It's made with one colour of Red Heart Unforgettable (Dragonfly) and a couple of different colours of regular worsted weight (4) yarn (Bernat Premium green and purple). Unfortunately, as I mentioned in a previous post, I find that cell phone pictures don't always give true colours. I had to tweak these pictures with my picture editor, but they're still not totally accurate. I like the colours better in person. 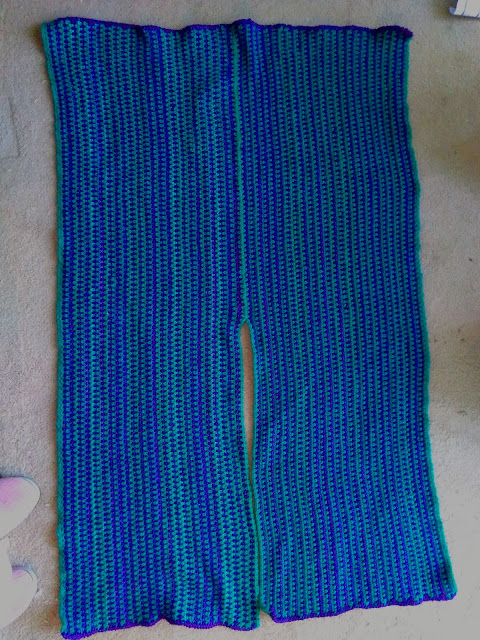 I also find that if too much time elaspses between the start and finish of a project, especially if I don't work on it for a year or two, my gauge can change, which is the case in this project. The second half is actually a little smaller than the first half. Another word of advice if you're making this project is when you're sewing the back seam, don't sew it all the way to the middle or you end up with the ruana too long in the back. See the first photo. I probably could have stopped 2 or 3 inches short of the centre.
Once that was done, I needed to find another UFO or WIP to finish. While I was pondering this and looking in some of my books, I realized that I didn't have a current knitting WIP or UFO. Well, not exactly - I do have one project that is more of a sampler afghan, where some blocks are knitted and some are crocheted. But I had no strictly knitting projects on the go (at least I don't remember and haven't found one). So, I decided to start on the San Diego Sunset afghan, using Loops and Threads Kidding Around yarn instead of the mohair called for. I'm not sure why I opted for that, except that I think it was on sale at Michael's when I bought it. And the fact that mohair is not readily available. I probably could have used Red Heart Unforgettable, but it's a lot more expensive than what I likely paid for the Kidding Around. I'm not sure how well Kidding Around - a 6 weight - is going to work with knitting worsted (4 weight) in the same project, however. I guess I will see. 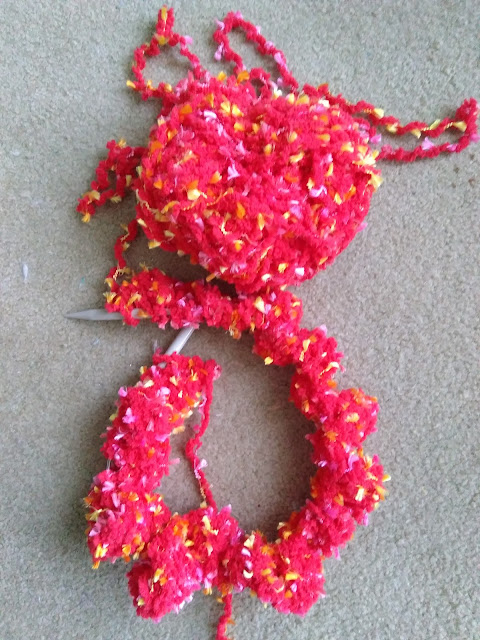 I still need to buy the knitting worsted for this project. So this was as far as I could go for now. So I looked for another UFO to work on. Earlier I had pulled out the Feileacan shawl and assembled the first butterfly I had made. It had been a lot of work and I really didn't like how it turned out. So I googled and found an alternate butterfly pattern and tried it. I liked it better than the one I made using the pattern, but it was still a lot of work. And because it was slightly smaller than the original one, I would have to make more. And I've kind of lost my motivation for crocheting butterflies.
I suppose I will finish this shawl eventually - another project for my daughter - but not right now. I also did a little half-hearted work on Sophie's Universe.
So I rummaged around in my rough totes and found this afghan. 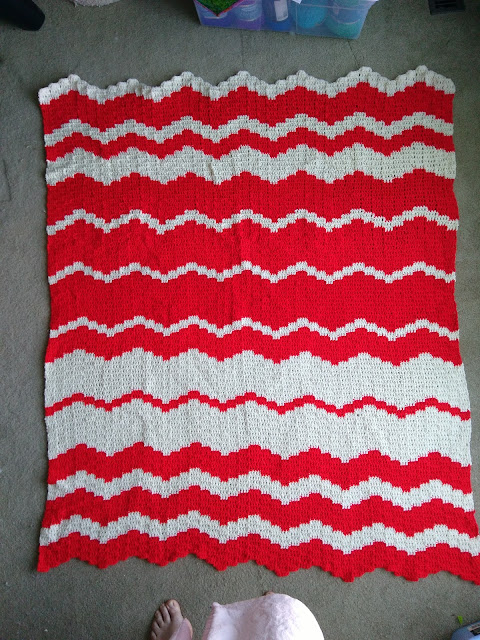 I suppose I will likely never know this afghan's full story, but on one of my frequent trips to the thrift stores, I found what was probably a crafter's stash: yarn, patterns, etc. I concluded that, in all likelihood the crafter had either passed away or been admitted to a seniors' home and her stash ended up at the thrift store. I bought some patterns and some other crafting stuff and found this afghan, partially finished, plus the unused yarn in one of those zippered vinyl storage packages that afghan kits come in. 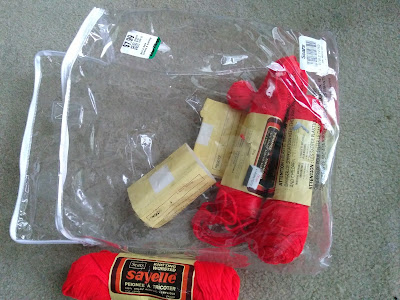 No pattern and no picture, but I determined to take it home and finish it in honour of the anonymous crafter that had to relinquish her (or his) craft. The first thing I had to do was determine how to stitch this pattern. 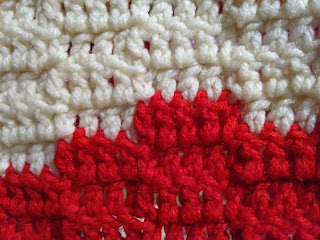 With help from the members of a crocheting group on Facebook, I was able to find directions online and start stitching this afghan. I also had to determine what size of hook to use in order to keep my stitching gauge consistent with that of the original crocheter. I ended up using a 3.75 mm. And then I had to decide how to alternate the colours. In the absence of a pattern to give me any direction, and since the first part of it didn't seem to have any consistent number of rows for each colour, I just more or less randomly chose. But then I ran out of the ivory yarn, other projects took precedence and this one ended up at the bottom of one of my rough totes.
But last night, I finished it. I'm not sure how big the original project was supposed to have been. I ended up with an afghan approximately 46" x 67", a good size for an afghan, and still have 3 skeins of the red yarn left over. I wanted to finish the end with ivory, so used some from my stash. Even though it, too, is knitting worsted, it was substantially bulkier than the original yarn, so I didn't want to use too much of it in this afghan, so just did 3 rows to finish it off. 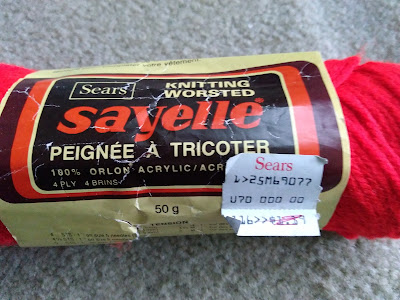 Originally, I had thought this afghan had come as a kit, which is why it puzzled me how I ended up with 3 extra skeins of yarn. However, several of the labels had price tags on them, which is not generally done in a kit. Likely the original crafter just used the vinyl package to keep this project together. Even bed linens come in this kind of package, so it doesn't necessarily have to have originated from an afghan kit. I did a little research to determine how old this project might be. Canada became officially bilingual in 1969 (note the French on the label), but Simpsons Sears did not become just "Sears" until 1984. I thought maybe it was older because it seems like forever since yarn was called "sayelle." Evidently not.
Two UFOs finished and a new project started. That's still progress, isn't it?
Posted by Laura B at 16:04