Most, if not all of you, have likely heard of the tragic bus-semi accident in Saskatchewan that resulted in the deaths of 16 members of the Humboldt Broncos hockey team, as well as injury to 13 others. Many people around the world were touched by this tragedy, and 142,004 people donated over $15 million to the GoFundMe campaign set up to support the victims.  Meanwhile, Haus of Stitches, the crafting/quilting/sewing/whatever shop in Humboldt gave us quilters an opportunity to help the way quilters help best: make quilts. The call was originally for 200 quilts as the organizers wanted to be able to give them to victims, families, first responders and health care professionals involved. Last I heard, the expected number was 700, and they are still coming in. The Quilts for Broncos Facebook page stated this in their thank you post: "If you have not yet started a quilt, we kindly ask that you turn your generous and charitable efforts to other groups in need such as the Toronto Attack or other groups in your community in need of support." (Still waiting for a quilt shop or guild in Toronto to step forward and coordinate the efforts for the Toronto Attack victims).
Today, I dropped my contribution off at Johnson's Sewing Centre in Edmonton as they are collecting and shipping them to Humboldt. 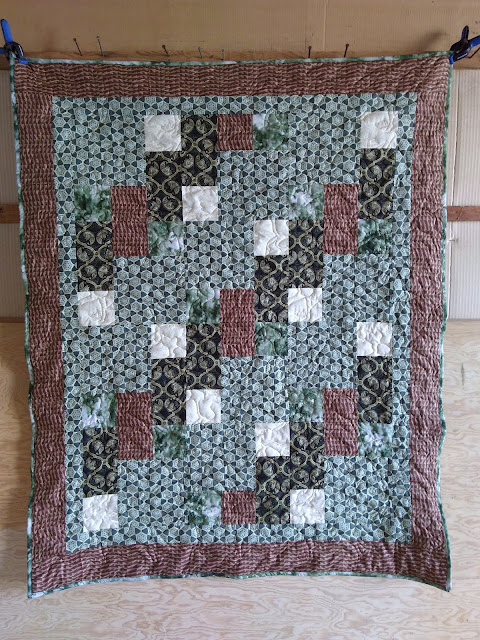 I call it "Hope."
Originally, I tried to take this picture outside, on the same tree limb where I posed the Horsefeathers afghan in the previous post. Unfortunately, the wind was not cooperating and the quilt was blowing pretty much parallel to the ground. I later thought that perhaps I could have taken the picture if I laid on the ground beneath the quilt... Creative photo ops aside, I decided to back the truck out of the garage and take this picture inside. But first I had to wash my hands. Evidently, the warmer temperatures had gotten the pine sap flowing, and by the time I had finished fighting with the wind and the quilt, my hands were all sticky. Inside I discovered that pine sap does not wash out with simple soap. I had to resort to vegetable oil, which I then washed off with soap. After the picture taking however, I found a sticky spot on the edge of the quilt. Knowing I couldn't put vegetable oil on the quilt like I did on my hands, I sprayed a little Windex on it and then rinsed it out. That seemed to do the trick.
I could have sent my quilt top in once I'd finished it. The organizers of the quilt drive were willing to take fabric, blocks, and quilt tops as well as finished quilts. But since the team is called "Broncos" and I have two different (and recently purchased) horse-themed pantographs, I was determined to finish the quilt using one of them. I opted for Mustang Stampede from Meadowlyon. I used a high-loft batting that was given to me by a friend, and I thought it would give the quilting more definition. But I found that you can barely tell (unless you look really closely) that it is horses. 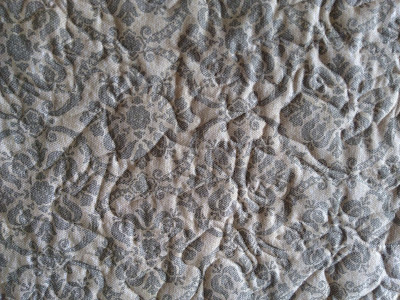 Look carefully, and you will see the horse. 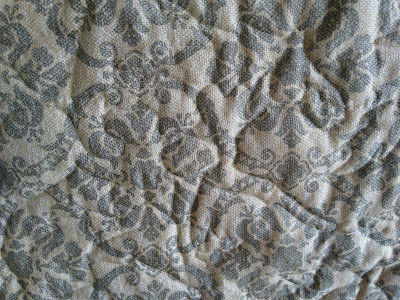 Here's a close-up. You can see the horse's head just to the left of the light-coloured square. 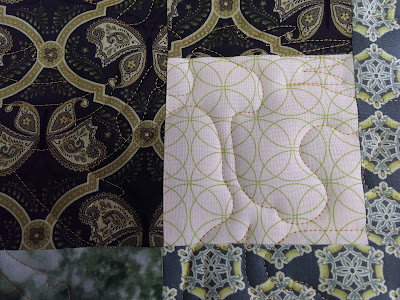 If you look at the picture in the pantograph link, you can more readily discern the horses in the stitching because you'll know what you're looking for. I guess maybe I chose thread that blended in too well.
And here the quilting is in progress at Central Sewing Machines: 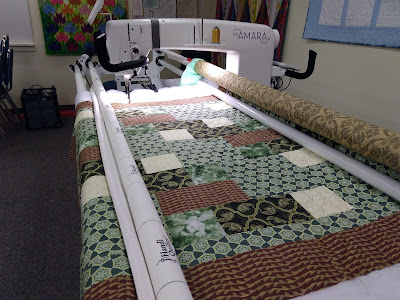 Meanwhile, I picked up this fabric for the Stellar Elegance Mystery Quilt: 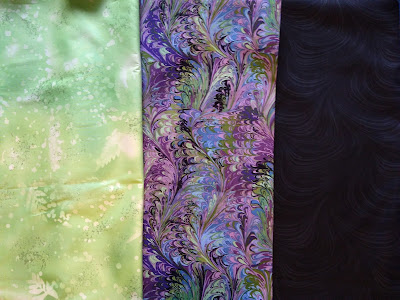 I'm planning on using the black as the background fabric.
And I'm making some serious progress on my Lilac Grove afghan. 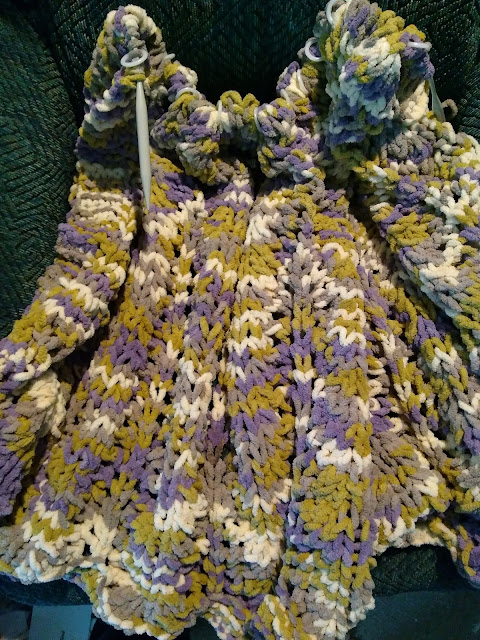 While I was in Johnson's, I just couldn't pass up this quilt kit. 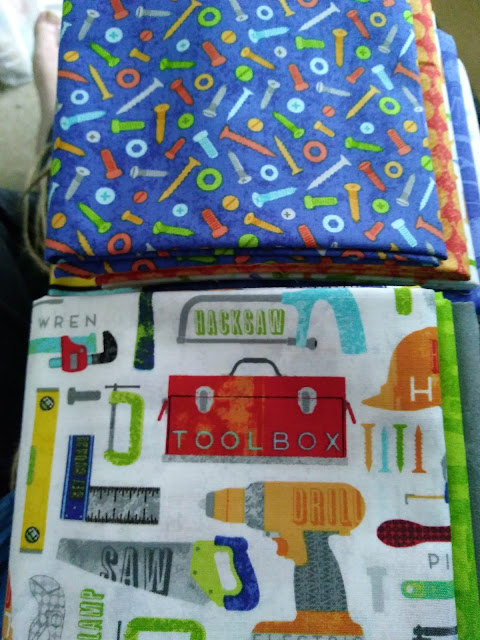 Isn't that tool fabric adorable? I intend to call it Grandpa's tools. It will probably go to the son of my father's oldest grandchild. Even though he's never met his great grandfather, I want him to have a memento of him. And tools always remind me of my dad. And I already have the perfect pantograph!
Posted by Laura B at 20:24