According to Merriam-Webster, the definition of horsefeathers is nonsense, balderdash. And 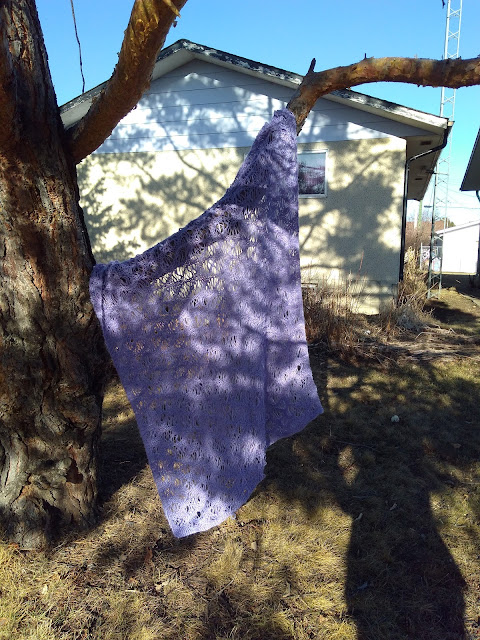 I have to admit that this afghan is a bit of nonsense. First of all, this wasn't the best choice of yarn for this particular pattern. As a roving yarn, there was too much variation in the thickness of the yarn to work very well with the "loopy" part of the pattern. Secondly, yarn choice aside, the pattern itself is rather silly. All of those big loops of yarn can too readily get caught on someone's toe, a bedpost or whatever. By the time I'd come to that conclusion, however, I was too far into the project to want to start over with a different pattern. So I finished it off. 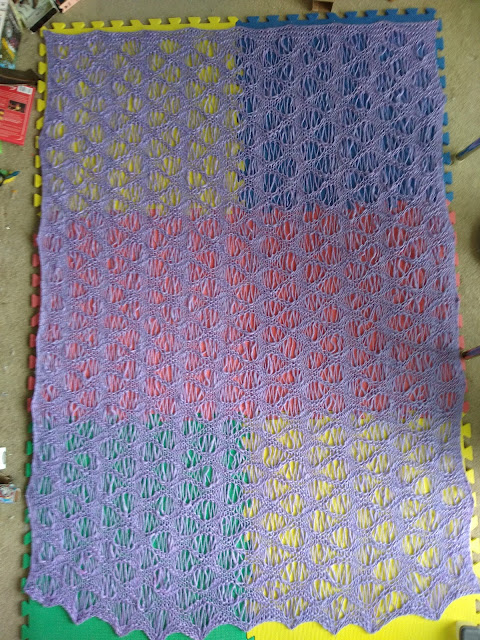 Above, the afghan is on the blocking mat, and you can more clearly see the big loops. It's a lovely colour, and I think that's what drew me to this yarn. The pattern is actually called Peacock Feathers, and you can find it in this book,and, as far as I recall, this is the first afghan I've finished from "Weekend Afghans." The pattern is actually quite attractive, just not very practical for use. And with two cats in the house, decorative afghans can't just sit around on the back of a chair or sofa. As a matter of fact, while I had the afghan on the blocking mat, I ended up with two snags in it, thanks to the cats. Fortunately, I was able to pull them out, and after the second snag, I covered the afghan with a sheet to prevent further mishaps.
I started it on a circular needle, but found that all of those YOs tightened up on the cable part of the needle and doubled over on themselves, making it very challenging to get them back onto the needle end to knit them off again. After the first try or two, I started switching to a regular needle for the YO rows. However, I didn't have the right size of regular needle (9 mm) and had to substitute an 8 mm. Eventually, I bought a pair of 9 mm needles and just used them to finish the afghan rather than the circular needle. I didn't add the fringe that the pattern called for. I'm not a big fan of fringe as it can get tangled and matted and I don't think this yarn would make good fringe anyway.
According to my Ravelry account, I started this project on January 16, 2016, though my Ravelry dates are not always 100% accurate. I tend to start a project without documenting it in Ravelry, and it's often not until later that I get around to adding the project. So some dates are just estimates. Nevertheless, it's taken over 2 years to complete this afghan. I'm really glad it's finished: another WIP to check off the list!
Once finished, I had to figure out how to get a decent picture of it. The branch on this pine tree is almost ideal for displaying quilts and afghans. 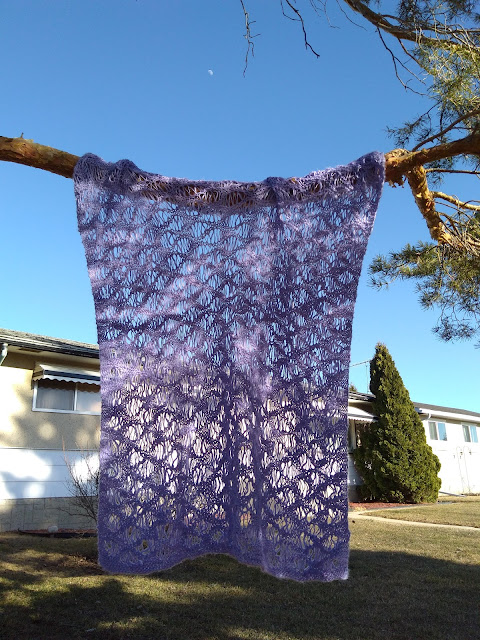 Note that I said "almost." Although it's a good height and more or less parallel to the ground, it's too easy to snag yarn on the rough bark and twig remnants along the branch. I had to exercise great care in placing and removing this afghan.
Now I just have to figure out what to do with it. I can't imagine that anyone would want this silly thing, pretty though it is. I'll probably just hang it over a quilt rack or ladder when I get around to buying one. The colour does go well with my bathroom, so maybe I'll hang it over a towel bar... 😁
Posted by Laura B at 19:14