Sewing with a Twist

No, I have not developed a new sewing technique. "Sewing with a Twist" is just the name I have given to this quilt because all of the fabrics used are sewing-themed and I used the Twister ruler to make it. 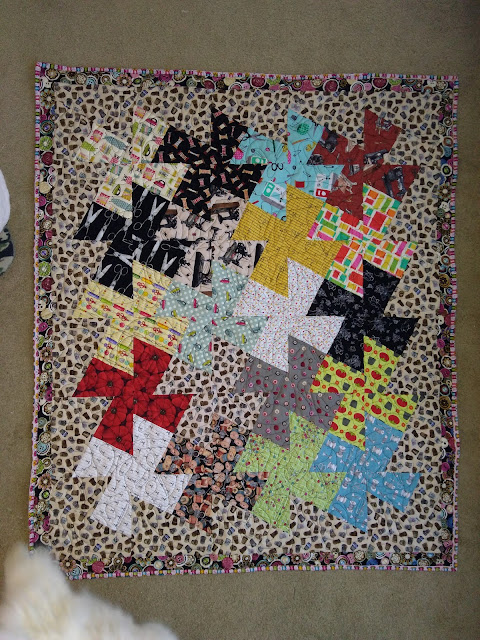 It measures 40" x 48" and I plan to use it as a wallhanging in my sewing studio. However, it's not one of my favourite quilts. While I like a lot of the individual fabrics, over all, it's a rather ho-hum quilt. It lacks panache. It doesn't have that "wow" factor that I strive for in my quilts. It's certainly not as pretty as the Evening Snowfall quilt that currently hangs on the wall in my sewing studio. 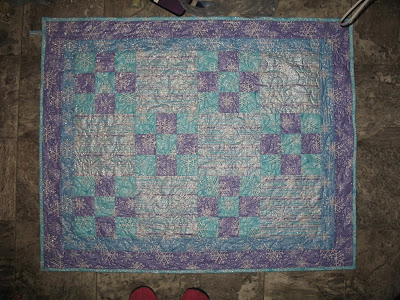 Perhaps if I'd chosen a different fabric than the thimble fabric with the beige background as the first border, I might have been able to give it a little more zing. Unfortunately, I chose what was availabe at a price I was willing to pay. Later on, the fabric I used in the backing and binding was on sale 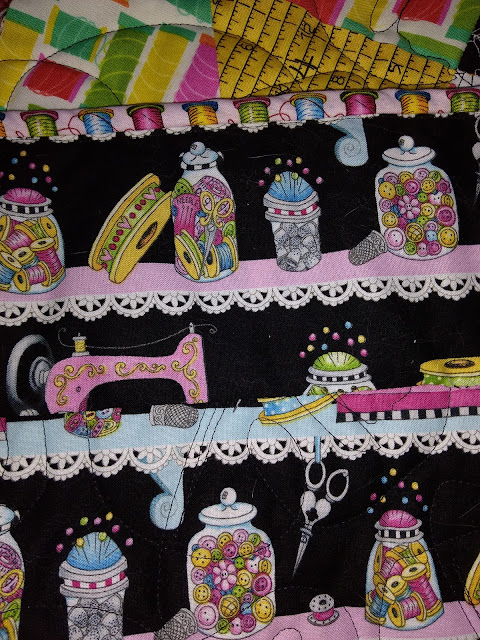 and fabric from that line would have spiced it up considerably. Regardless, it's done.
I actually started this quilt a few years ago. I don't exactly remember when. I bought the half layer cake of sewing-themed fabrics from Keepsake Quilting. It's the second one I purchased from them that I wasn't really pleased with the final quilt. The previous one was the Sweet Dreams quilt. It's certainly not Keepsake Quilting's fault. It's mine for how I chose to use them. I was aiming for smaller quilts, and so I didn't add much in the way of extra fabrics in either. If I had, I could have done something totally different and likely ended up with quilts with a lot more pizzazz. Note to self for future reference...
When I finished the quilt top, I decided to add a second border. Otherwise, it would have had all bias edges and that's not something I like to deal with if I can avoid. That's where the button fabric came in. I'm not sure where I picked this one up and I think it was only a fat quarter that I managed to squeeze enough fabric from for a narrow border.
I've been having a Staycation the past couple of weeks, so I had time to get into the longarm studio to finally get this one quilted. I used a pantograph called Sewing Time, which features needles and spools of thread. 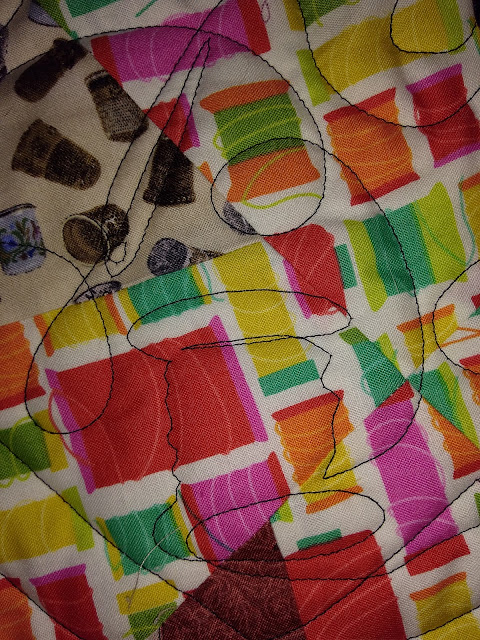 It was actually a much less intense pantograph than the last few I've used. It took me just under 2 hours to do the quilting, but, of course, that was for a fairly small quilt. I knew I wanted to use black thread for the bobbin, but wasn't sure what to use for the top. I made a bold choice and quilted it in black. I've never done that before, but I think it worked.
After finishing up at the Longarm Studio and having lunch, I headed to Johnson's Sewing Centre to determine what to about my sewing machine situation. I still have the Janome Memory Craft 6000, which I inherited from my mother. 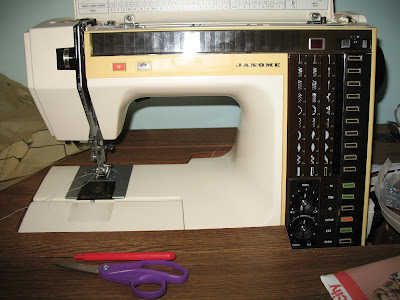 It's a good, solid machine that will probably last me the rest of my life. I'll use it as my back-up sewing machine and maybe I'll set it up for my garment sewing machine. While I do little of that, it's nice to not have to fiddle with changing threads, needles, pressure feet, etc. when switching from piecing quilts to garment sewing. Besides, I hate being without a sewing machine when I take mine in for servicing. In my current situation, it can be a month before I get a chance to pick it up again. If I have two, I never have to do without. I took the Memory Craft 8000 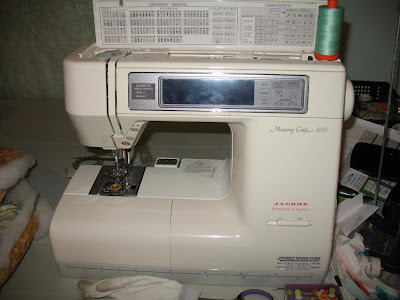 in to Johnson's as the touchscreen was not responding consistently, if at all. This machine was given to me by a friend in late 1998 or early 1999. She had both this Janome and a Pfaff and decided she didn't need both. I tried to tell her that I already had the 6000, but she basically just said, "When are you coming to pick it up?" So I did. This machine came out in 1990 and was the first home computerized embroidery machine. Unfortunately, being that old, the part it requires is no longer available. The machine itself still works fine, but without a working touchscreen, I couldn't even switch to the ¼" stitch I need for piecing. What to do? Sadly, I surrendered it to the repairman to use for parts. I feel rather melancholy about it. It moved from Ontario to Alberta with me and has seen a lot of sewing and quilting in the nearly 20 years I've owned it. It saw me through my divorce, restarting my career and pursuing my degree. It saw my daughter go from a little girl to an adult and a mother. And the friend who gave it to me has passed away. Is it foolish to grieve over a sewing machine? Actually, I think I'm grieving over what it represents - a big period of my life, all the lives it's touched through my quilting and the life passages I've gone through during the time I owned it. And I miss my friend that gave it to me. She was such a sweet, thoughtful person and I am thankful for the privilege of having her in my life.
Having said all of that, somehow I'm having a hard time warming up to my brand new machine. 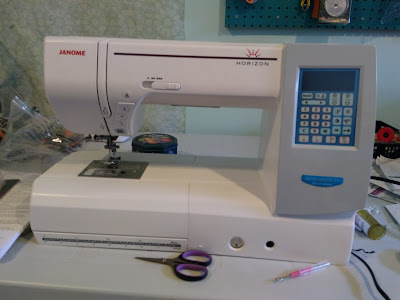 It's a Janome Horizon Memory Craft 8200 QCP Special Edition. It's a beautiful machine, but perhaps I should have allowed myself a grieving period before purchasing a new one. 😉 I think I'm just going through too many transitions in my life and having to learn a new sewing machine was probably one of the last things I needed right now. However, it's bought and I actually did the binding on the above quilt with this machine. It also came with a table, but I need to tidy up the sewing room a lot before I can set that up.
Down to 6 quilt tops that need to be quilted, but still lots of WIPs and UFOs as well.