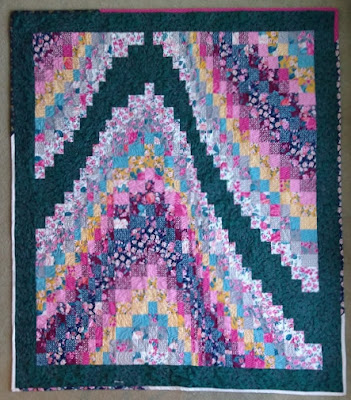 This is a quilt of firsts: first bargello quilt completed, first jelly roll quilt completed (though I have 2 other jelly roll quilts in progress, one of which is a bargello, that I started before this one, but this was the first one finished), first scrappy border... And first blog post in over 2 months! It's not that I haven't had anything to say. It's just that I prefer to finish a project before I blog about it. And, aside from small projects like dishcloths and potholders, there's not been a whole lot of finishing going on around here. I counted and I actually had 8 quilt tops finished and ready for quilting. With this finish it's now down to 7, but as soon as I put the border on the Licorice Allsorts quilt, it will be back up to 8 again. It's not that I've lost my zest for longarm quilting. It's just that it's inconvenient and expensive. If I was content to finish all of my quilts with Bumpity or a similar, simple pantograph, I could have them quilted lickety split and not have to pay so much for longarm rental. The Chelsea Rose Bargello would have probably been done in under 2 hours. It's only a 50" x 60" quilt. But it took me 4 hours of quilting time, not including the time it took me to load and set up. That's because I wanted a "suitable" pantograph. When I chose the Abstract Rose 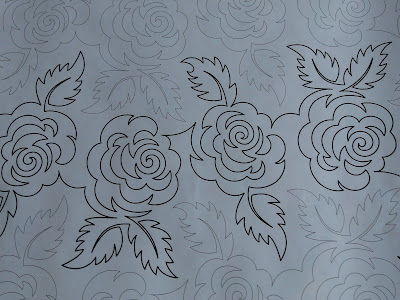 pantograph, I knew it would be challenging. Anyone who does machine quilting knows that for each of those points and tips, you have to bring the machine to a full stop - even if just for a fraction of a second - in order to make them sharp. So, the more points and corners a design has, the more labour intensive it will be. And this one has lots! While I was wholly sick of quilting this pantograph by the time I was done, the results are really beautiful. 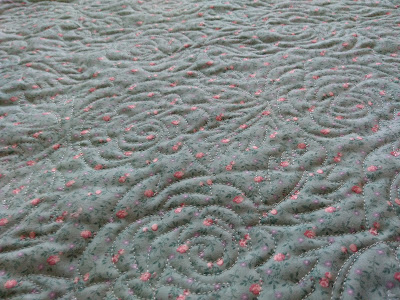 I have to thank Denise Schillinger for such a stunning design. 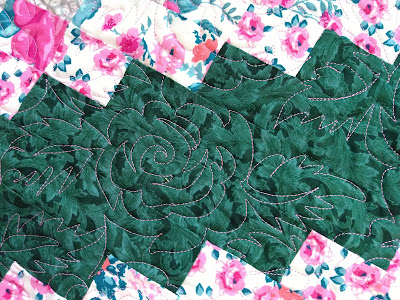 I think if I was ever going to do a whole cloth quilt, this would be a design to consider. It almost seems a shame to use it on a pieced quilt where the quilting just disappears into the background. However, I don't feel like I'm in a hurry to use it on another quilt. My feet were really aching by the time I was finished. If only I had my own longarm quilting machine, I could work on my quilts an hour or two at a time. Or even half an hour. And I wouldn't have to worry about how much it was going to cost me when I use a more labour-intensive pantograph. That's a contributing factor in why I have so many quilt tops waiting to be quilted. For most of them I have chosen pantographs that are more "involved." 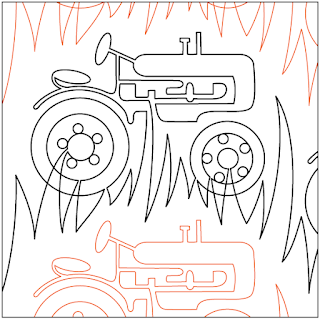 I want to use Farm Tractor for the Deere Country quilt. Look at all that detail, and all of those points! 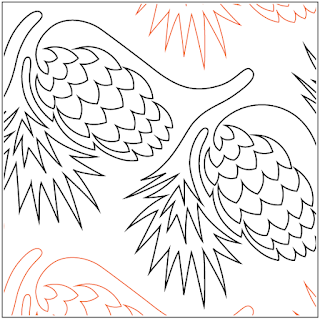 I chose Pine Bough for the Wintry Woods quilt: yikes - it's mostly points!
So I have been rather reluctant to book the time to finish these quilts. Another consideration is what happens if I can't finish it in a day? Or even in the time I have booked. At one studio where I rent, you have to book in 2-hour increments. What if I don't finish the quilt in the 4 or 6 hours I have booked, and someone else has booked the 2-hour increment after me? And what if I book 6 hours, and the quilt only takes me 4-1/2? I doubt that they will refund me for the remaining hour and a half? And what can I quilt in that remaining time? A table runner? I had actually booked 6 hours to complete the Bluenose II Pixel quilt, and it ended up taking me 7. Fortunately I started early enough in the day that I had time to finish and there was no one booked after me, so I could take the extra hour. That's why I prefer the other place: you only pay for the actual quilting time, and it's cheaper, though they did increase their hourly rate when they switched to a newer machine with a bigger throat space.
And $25/hour is still $25/hour. And it's a shame that I end up paying as much to rent a longarm as I would to pay someone else to finish my quilts. And, even though thread and prewound bobbins are included in the rental price, I often end up buying my own because I'm not always happy with the selection. I'm fussy like that. 😉 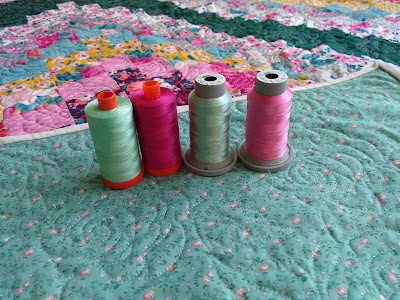 In the case of this quilt, I bought both upper and lower threads, the two Glide threads on the right. The two Aurifil on the left were used to attach the binding.
And on the subject of thread, I had a discussion regarding appropriate thread for longarm quilting with the repairman at the studio. Since he repairs these machines, I think it's safe to assume that he knows what he's talking about. Cotton, specifically King Tut cotton from Superior threads, is what he recommends. Not polyester. Hmm, my understanding of the rationale for using polyester is that the high speeds of a longarm quilting machine would result in the thread breaking more frequently when using cotton thread, but Rod (the repairman) didn't seem to think that should be an issue. If I ever get my own machine, I will have to experiment and find out. The interesting thing is that both studios where I rent offer Glide polyester as the thread included with the rentals, but Rod doesn't recommend that. He said that Glide is actually an embroidery thread, which I've been told before. Meanwhile, I purchased a Glide colour card, so that I can chose thread colours at home, for when I order online or when I don't want to drag fabric samples along with me when I shop in person. 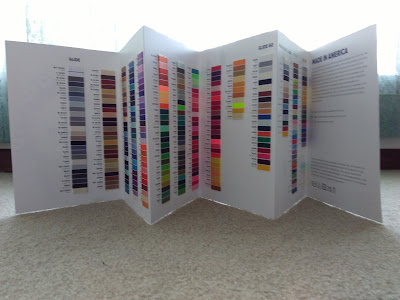 Now maybe I need to buy a King Tut colour card. But I already have Aurifil colour cards. And the repairman didn't seem at all familiar with Aurifil, confusing it with Wonderfil. So likely an Aurifl 40-weight cotton would be as good as a King Tut? As I said, if and when I get my own machine, I will do some experimenting.
Speaking of machines, the bad news is the touchscreen on my Janome Memory Craft 8000 can not be replaced. The part is no longer available. It has been giving me trouble for a few months now - working inconsistently. Sometimes it would work fine and sometimes not at all. Following instructions I found online, I was able to recalibrate it and it worked fine for awhile. Then it started acting up again. Sometimes I could "trick" it into working again by switching it on and off and sometimes by just switching it off and leaving it for a while. But towards the end, the touchscreen wasn't even responding to the recalibration technique. And I ended up leaving the machine on constantly if I was working on a project. Turning the machine off, the machine would default to the basic straight stitch when I turned it back on, and I needed the touchscreen to change the stitch to move the needle for the ¼" stitch. I finally took it in for repairs and that's when I found out that the part is no longer available. I haven't had a chance to pick it up, or do anything about it. I wasn't planning on replacing it yet. My "machine" priority has been the longarm. I still have the Memory Craft 6000, which doesn't have a touch screen. It's fine for piecing, but I tried using it to embroider the quilt information on a couple of quilt backs, which is what I do instead of a label. Unfortunately, unlike the 8000, it doesn't have a viewing screen to see what I've entered so that I can tell if I've messed anything up. It also isn't consistent in spacing the letters. 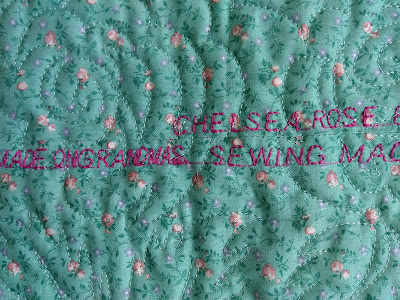 Rather messy, isn't it? But I wasn't about to rip it all out and start over. The 6000 hasn't been serviced in a while because I haven't been using it, so hopefully a good servicing will make the lettering more consistent. But if I take it in for servicing, that will leave me machineless, except for a really cheap Omega that I don't have a ¼" foot for, and the little Janome I bought for my grandson. And that's really only suitable for children's sewing: can't change the pressure foot and only 1 speed. So, maybe it's time for a new sewing machine. The longarm will have to wait anyway, as I've got some other developments in my life, which I will likely discuss in a future post.
Meanwhile, back to the Chelsea Rose Bargello quilt - 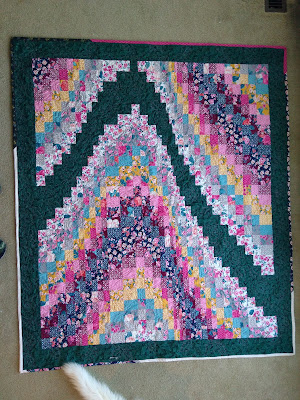 I have long wanted to do a bargello quilt, though I didn't originally order the Boundless Chelsea Rose jelly roll for that purpose. I intended to use the strips as setting frames for focus fabrics, but decided that a lot of this fabric is too busy and would distract from the focus fabrics. I was planning on doing the bargello with a different jelly roll, but found that jelly roll lacked sufficient contrast, and I ended up using it to make the Licorice Allsorts quilt (look for that one in a future post). And so finally decided to use the Chelsea Rose fabric to make the bargello. Here's the MSQC video:
I also bought the pattern because I really needed it for the cutting directions and layout. However, I should warn you if you plan on making this quilt that the strips for the contrasting fabric (the teal in my quilt) need to be cut 8½", not 9". Not sure how this escaped anyone's attention, but it says 9" in both the video and the print instructions.
So now I can cross "Bargello" off my quilting bucket list (though, as I mentioned, I do have one more bargello WIP), and I can't say that I will be in a hurry to try it again. It's rather tedious. 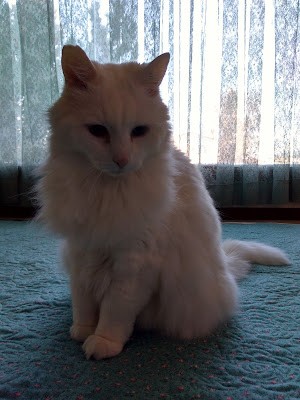 Mystery has given this one his seal of approval. And it will soon be off in the mail to my newest great niece.
I'm hoping to get Where the Charming Roses Bloom quilted soon 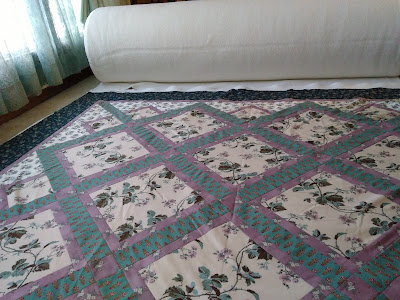 but feel hesitant because I intend to use the Abstract Rose pantograph again. It's 70" square and I calculate that it will take about 7 hours to quilt.
Now for some dishcloth finishes: 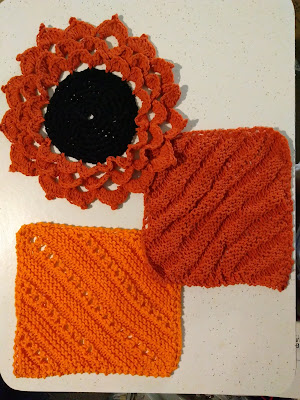 Orange ones for my daughter 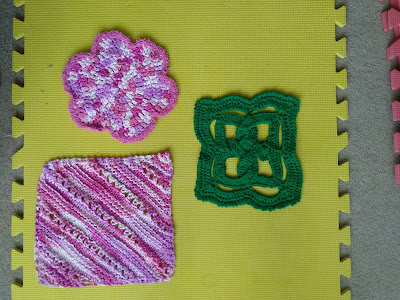 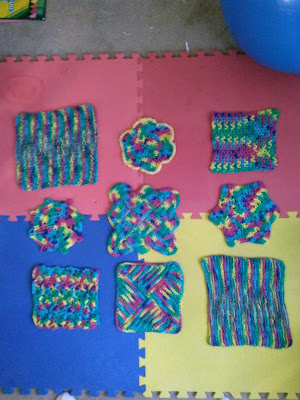 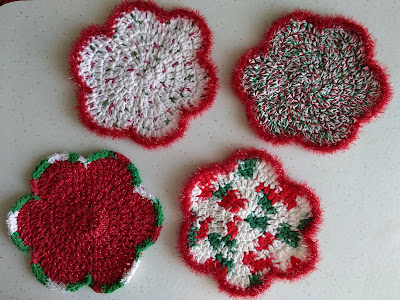 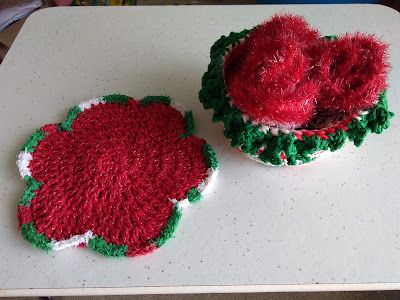 and a container to put them in 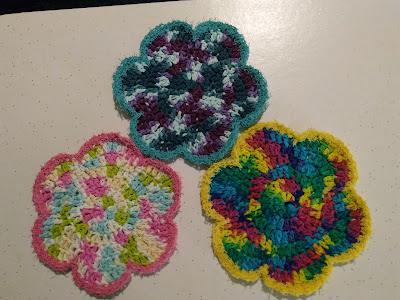 several Pretty Posies
I also finally finished a CAL (crochet along) from 2015, I Want That Bag. I should say that I finished the crocheting part. I still have a zillion ends to work in, and need to line the bag. Will post once all of that is finished.