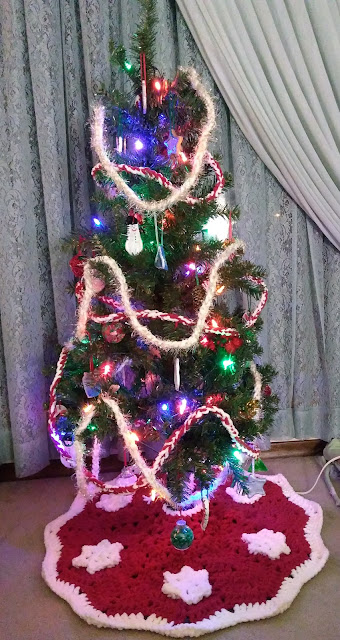 I don't know if it's because I'm getting older or less organized or because being short-staffed at work has impacted my outlook at home, but Christmas came much too fast this year. I didn't get anywhere near as much done as I had hoped, but sometimes I think I expect too much of a single-homeowner who works full-time. 😉 However, I was still able to get some of the important things done. Like spending time with my grandson. That's always high on my priority list.
This year I determined to make some homemade Christmas tree decorations with him. I have a 4' green tree that I bought to use as a prop when I was teaching his Sabbath School class at church, and I was using a camping theme. I'm no longer teaching his class, and I didn't have any decorations for this tree, so this seemed like the perfect vehicle for his homemade decorations. I had bought some clear plastic baubles at Walmart in the after Christmas sales last year. I used one of the bigger ones to make a fabric decoupage bauble for my tree 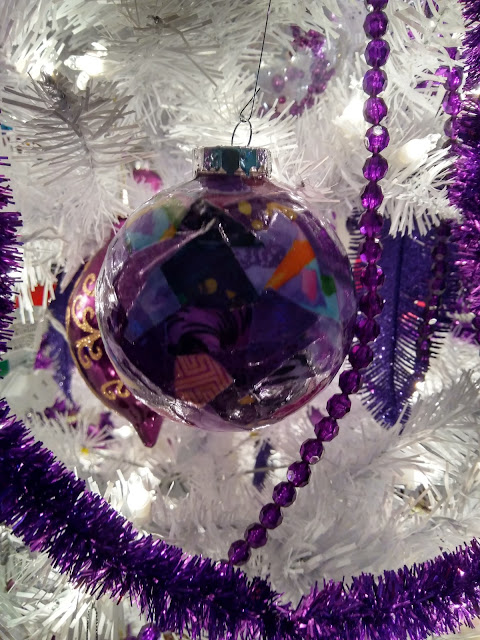 and he used a smaller one for his tree (with Grandma's help, of course). 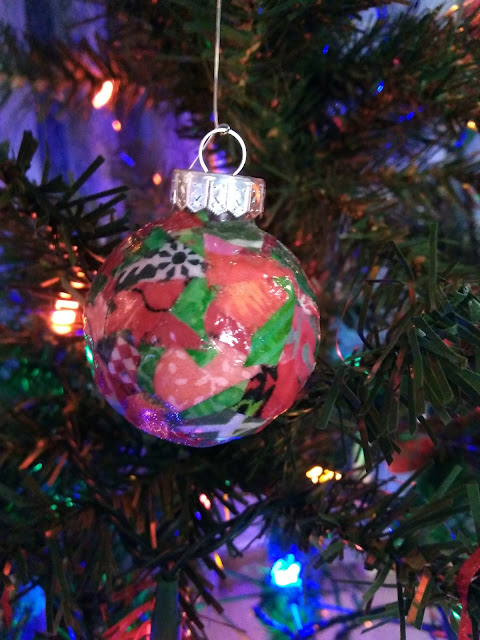 He also filled some of the baubles 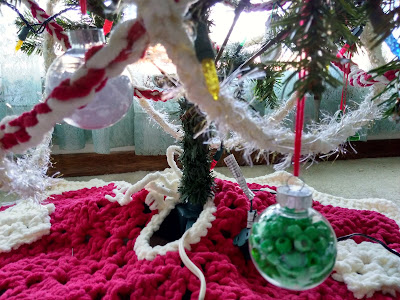 but you have to be cautious in filling them, lest the filling have too much weight for the hook. And let me forewarn you that if you try to fill them with those tiny styrofoam snowballs, static makes them stick everywhere!
Covering a styrofoam ball with pom-poms made another ornament. 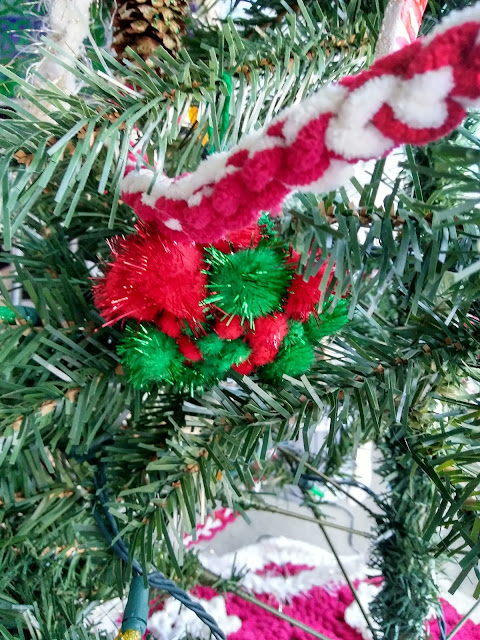 The majority of the ornaments are salt-dough, cut with cookie cutters, 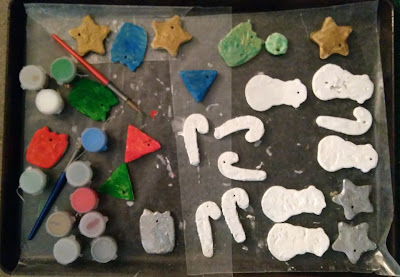 dried in the oven, painted and sealed with acrylic sealant spray. 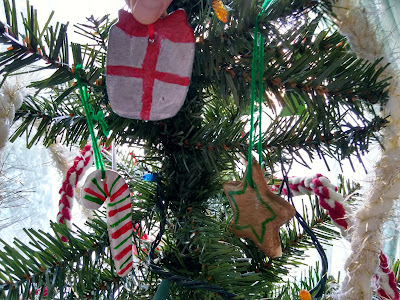 We also collected pine and spruce cones and made them into ornaments with glitter paint and ribbons. 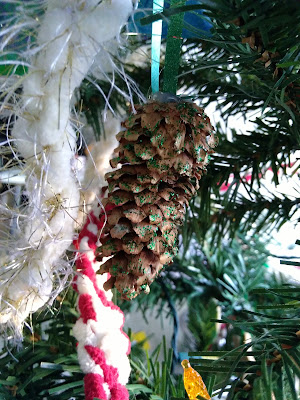 This one is felt glued to foam and decorated with sparkles. 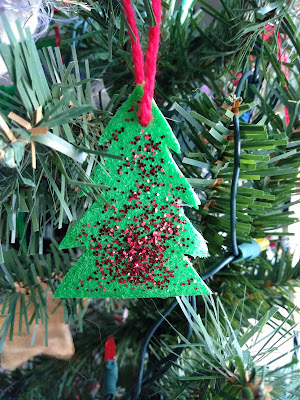 I have lots more craft supplies for making ornaments, but this was sufficient for this year. However, as I was determined that, aside from the lights, and possibly the tree topper (I have an angel from my childhood tree that is probably around 50 years old that I was planning on using on this tree, but I never got all of my decorations out of the garage), all of the decorations on this tree would be homemade, I had to decide what to do about a tree skirt and garlands. I wanted Damian to be involved in as much of the production as possible, so I googled for a loom-knitted tree skirt, as I know he can loom knit. I found a pattern, but the instructions were kind of vague and left me guestimating how to make it. I bought some Bernat Blanket yarn as Damian loves soft, fuzzy things like blankets and stuffies, and got him started on the knitting loom. I hadn't counted on the attention span of a 5-year-old and knew we'd never get it done on time for Christmas, unless we had started way back in January. I finished three of the wedges myself and stitched them together, 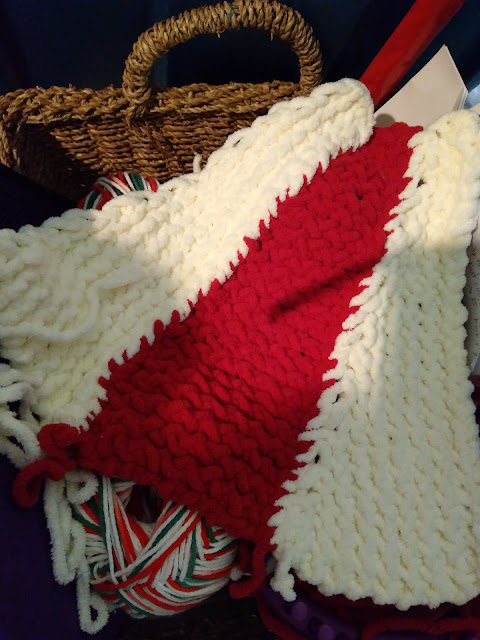 but I really didn't feel that they were going to work. They were lopsided and the space in the middle was going to be much too large. Knitted tree skirts are actually quite rare, so I googled and found this crocheted Snowflake Ripple Christmas tree skirt pattern that I figured would work and produced this. 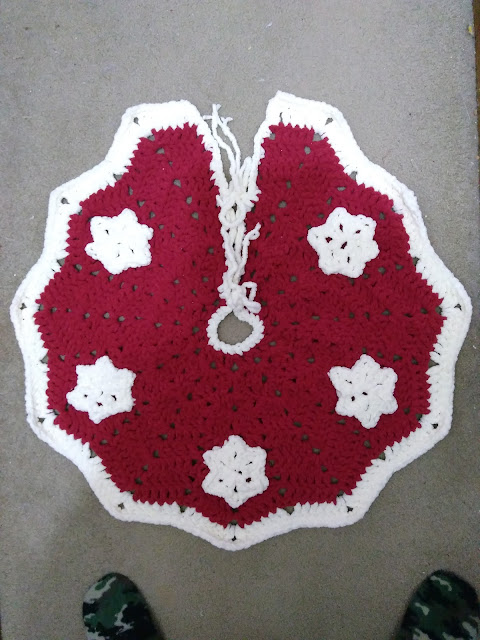 I had to abbreviate the pattern because I was using such bulky yarn and was making this for a small tree. Here it is under the tree: 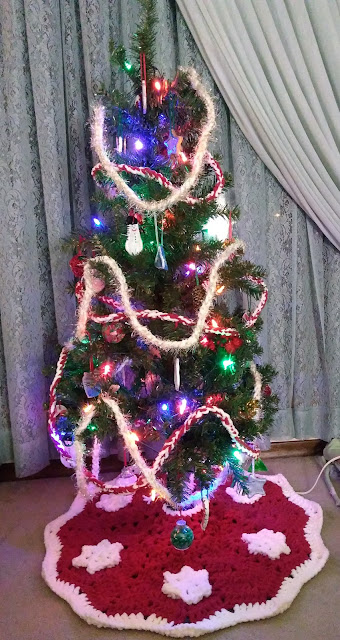 Much nicer looking, in my opinion, than the first pattern I tried. I used the leftover yarn to make the garlands, combining the red and cream for one garland and a gold tinsel-y yarn from my stash with the cream for the second garland. So, there you have it: Damian's Christmas tree. He also said that he would like a white tree, since Grandma has a white tree. So I brought in my white fibre optic tree, also about 4' tall. I never did get around to decorating it, but he was quite impressed with the fibre optics nonetheless.
Meanwhile, I was busy trying to get some dishcloths and hot potholders completed. Unfortunately, knitting and crocheting dishcloths exacerbated my carpal tunnel syndrome, so I had to employ my splints in order to get as many done as I wanted to. 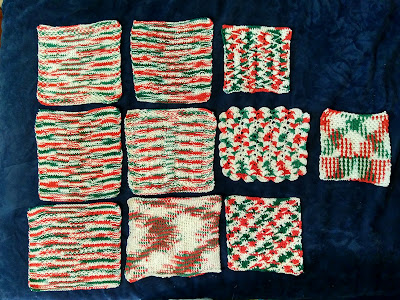 This isn't the total haul. I actually made two more, but they had already been given away by the time I took this picture. And I still want to make one more.
Surprisingly enough, I was initially only able to find one of the big balls of Bernat Handicrafter cotton in this Mistletoe colourway in our local Walmart. And nothing in a solid red or green. I find that the pattern shows up better when using solids than when using a variegated yarn. Walmart later got in some smaller balls in different holiday colours, which are rather expensive compared to the non-Christmas yarns, but I was able to find one more big ball of this yarn. You can tell it was from a different dye lot as the green is more faded-looking in the second ball. Most of the dishcloths have been knitted: 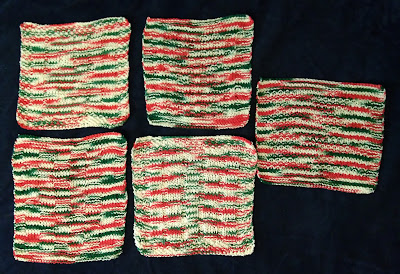 these 5, plus the two that have already been gifted. Each pattern is different as I'm working my way through this book:

I'm not loom-knitting, however. I'm using needles as I find needles are faster than the loom, and the pegs are too far apart for worsted yarn on most of my looms. It makes the stitches much too loose.
These are the crocheted dishcloths: 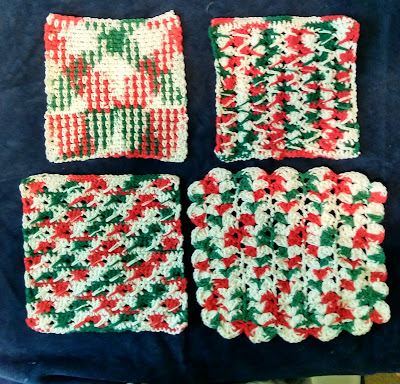 Top left is the Linen Stitch dishcloth. Interesting that it's produced a sort-of plaid pattern when using this stitch. You can tell that I started the new ball about one third of the way up. Bottom left and top right are variations of Cable Stitch dishcloths. And the bottom right is one I just made up. The final one is Tunisian Crochet 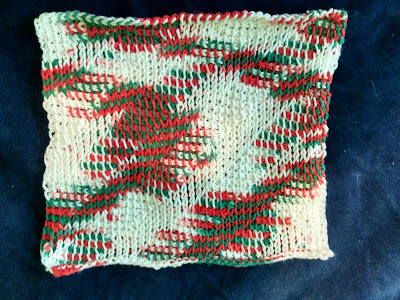 using the diagnonal stripe pattern from the Button Down Pillow found in this book:
All of these dishcloths look like they could use a good blocking, but why would I block something that's just going into the dishwater?
When I couldn't find a second ball of the Mistletoe Ombre, I took a brief detour with the Psychedelic colourway. 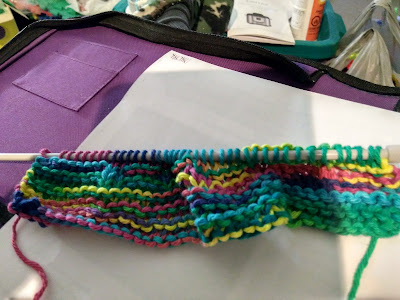 I can't remember whether I got one or two dishcloths done in this yarn (and I don't know where they are at the moment), but when I found the second ball in the Mistletoe Ombre, I decided to continue with that colour as these are Christmas gifts. I've used the Psychedelic before, but didn't end up with this problem: 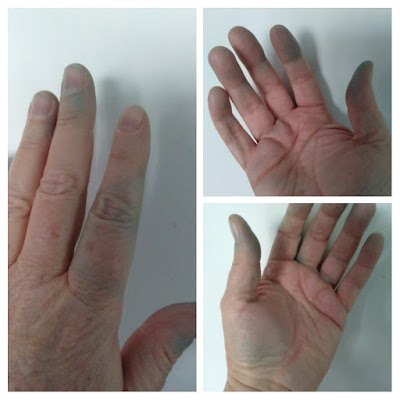 The dye was colouring my hands, so, before I gift these dishcloths I will have to make sure I give them a dye-fixing bath. I intend to finish the whole ball, however, and then do them all at once.
When I went to Damian's school Christmas program, I saw posters up for their pajama day the Friday before Christmas, where the students wear pajamas to school. (I have no idea if the teachers do or not...). So, in the midst of all the other Christmas hubbub, I threw together some awesome and warm pj's for my grandson from McCall's pattern M6224. 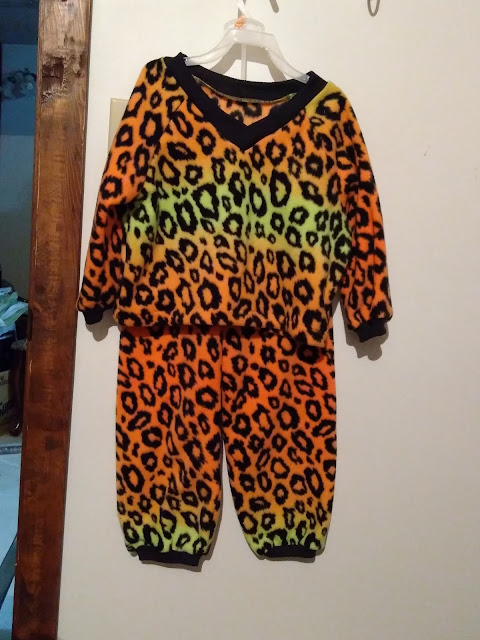 In order to complete them, I had to find my black binding, which necessitated dumping out multiple rough totes of fabric, creating havoc in my living room. 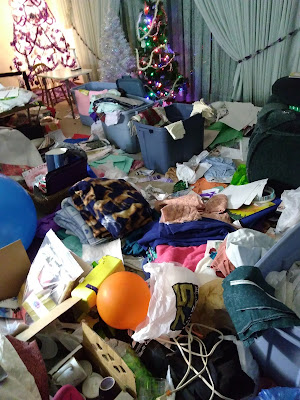 As it turned out, it wasn't a school day for Damian. He's in kindergarten and only attends Mondays, Wednesdays and alternate Fridays. So, no pajama day for him. I gave him his new pajamas for Christmas instead.
Damian and I also took time to decorate a gingerbread house. Being a newbie builder, I incorrectly decided to put the decorations on first before building the house. 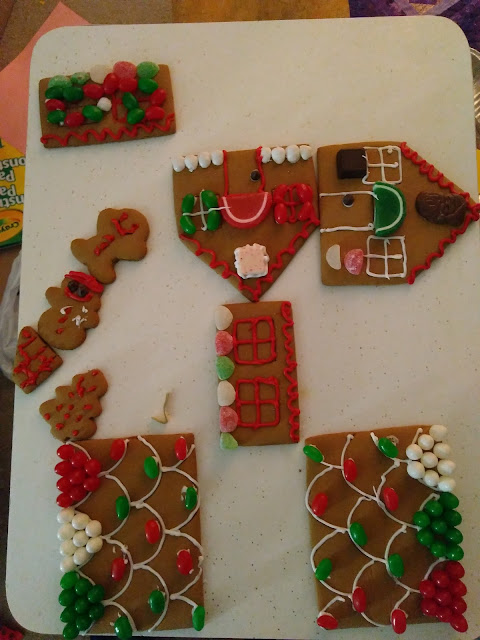 I promised him a carrot cake which will be our "plot" on which to build our house. I'm waiting for his next visit to complete this part.

Next project was quilt-as-you-go potholders. These two have already been gifted. 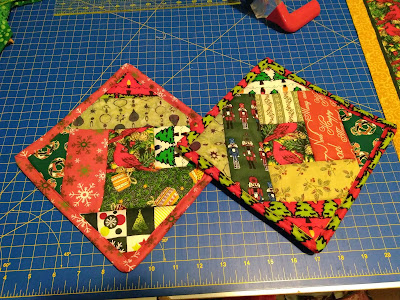 Might seem bizarre, but I find that there are certain colours that don't show up well when photographed on a horizontal surface with a cell phone. These look kind of yellowed out to me. 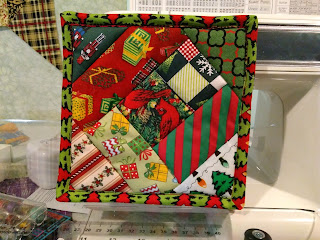 See: when I take the picture vertically the potholder doesn't look yellowed out like the ones in the previous photograph.
Last time I did these potholders, I used cat fabric for the centre. This time I decided to go with these cardinals. However, I cut the cardinals out smaller than the cats, with the result that a lot of the corners are not covered by the third round of fabric strips and I have to add a little tiny piece to the corner. Frustrating, but I'll try to remember for next time.
I've got 9 more potholders to add binding to, and one complete potholder to do and then I'll be done. 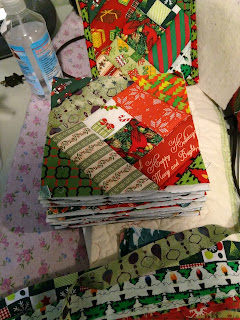 Except that for 2018, I plan on starting in January, doing one or two a month, and then I'll be sailing come December.
Posted by Laura B at 19:50