It must be Christmas in Killarney. It's late November, there's snow on the ground, and I'm sitting here watching a Christmas movie, while working on this Irish-themed quilt. 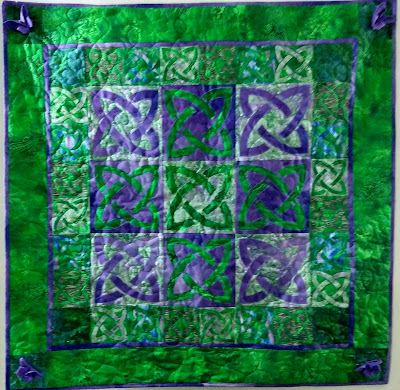 As I finished the last butterfly, it suddenly struck me how incongruous this quilt is with the season. I should be working on a Christmas quilt. Or at the very least an autumn one. But here I was finally finishing up Celtic Ballad, a quilt I started way back in May. I had actually planned on entering this quilt in the 2017 Pantone Quilt Challenge. The quilt top was done. But sciatica intervened. As a matter of fact I believe hunching over all this intense appliqué was a contributing factor in the sciatica. You can read more about that story in On Pain.  Needless to say I was in no shape to be able to quilt this project at that time. I ended up being off work for several weeks, saw at least 3 different physiotherapists, bought a TENS machine that didn't help, saw doctors several different times and tried numerous analgesics, without effect. I did the exercises the physiotherapists gave me when I could tolerate them. And finally had a CT scan, which showed that I have degenerative disc disease. And I gradually got better. But I continue the exercises to try to prevent that from happening again. My goal is to also lose the 40 extra pounds I'm carrying around, but it's a lot easier to put on than to take off.
Regarding the Pantone Quilt Challenge, I did enter in two categories, but didn't win anything. As a matter of fact, none of the competing quilts that I thought would beat mine won anything either. You see it was a modern quilt competition. And my quilts, apparently, are not modern enough. I don't intend to enter again. I didn't even like any of the quilts that won. And I refuse to make a quilt I don't like just so that it can win. I'm not really sure why I entered. There are three things that I don't like in quilting. One is modern quilts. One is using grey in quilts (and modern quilts seem to use a lot of grey). And one is using a lot of solids in quilts (modern quilts also seem to do this as well). Oh, and a fourth is that I don't like uber scrappy quilts. These, of course, are just generalizations, and there are exceptions.
But back to this quilt. It uses a technique called Give & Take Appliqué. You apply double-sided fusible web to the back of squares of fabrics, trace the template onto the paper side, then carefully cut out the pieces, because you're going to use both the "positive" and the "negative" parts. 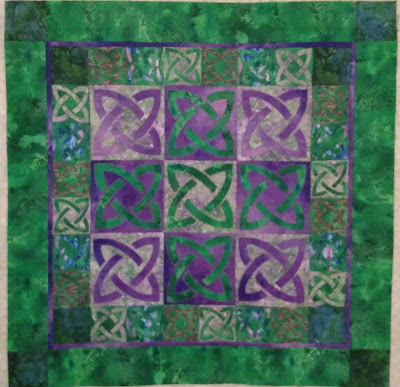 You can see it better in this picture of the quilt top. The appliqué pieces in the side squares are only about ½" wide, so that's what I meant by intense appliqué. I literally had to hunch over these squares to see what I was doing.
The pattern is called Celtic Ballad, though I considered calling it Ballad Féileacán, which is Irish for Butterfly Ballad. When I machine embroidered the name on the back, however, I wasn't sure if I was going to put the butterflies on or not. So I stuck with the pattern name. I believe the designer is Daphne Greig of Patchworks Studio. But I could be wrong. I can't currently find the pattern. If I do find it and I'm wrong, I will make the necessary corrections.
Anyway, I did get around to quilting Celtic Ballad about 2 months ago. I used the Luck of the Irish pantograph. But I just tossed it on the cluttered end of my cutting table when I got home. And it disappeared under the accumulation. Today I decided to try and tackle some of the projects in that clutter, and figured I should start with this one since it was the closest one to being finished. 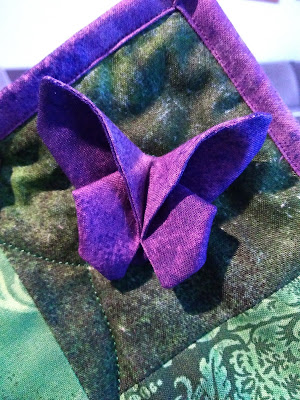 Binding, butterflies and even a hanging sleeve, something I rarely do. But this quilt is only about 40" square, so it's either a table topper or a wallhanging, so I decided a hanging sleeve was in order. As you can see, I did add the butterflies, following directions here: Kitchen Table Sewing, with some help from this video:
Even with this help, it was still challenging and took me awhile to figure it out. I should have just invited my great nephew Chandler over to help. Origami is one of his hobbies. But it's done now.
The quilt had been under that clutter for so long that it looked quite wrinkled. I actually ironed it before taking the top picture. Here's the before picture: 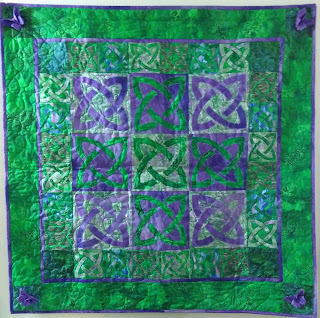 Even after ironing, it still looks quite wrinkled and I was wondering why. The quilts I keep in my closet are stacked (and sometimes jumbled) one on top of the other, and they don't look this bad, even after washing. I finally concluded that it must be all of the Heat 'n' Bond I had to use for the appliqué. I wonder how well it washes out. But I also don't know how well those butterflies will stand up to washing...
Now I think it was prettier before I quilted it, and not so sure I want it on my wall. But the butterflies look good.
Laundry's done. Now I need to put clean sheets on my bed so that I can climb into it. Gotta get up early for the Cyber Monday sales.
Posted by Laura B at 20:39