Getting Ready for Christmas

I'm not sure how long I've been working on this Christmas tree skirt - two or three years or more - but it's finally finished. 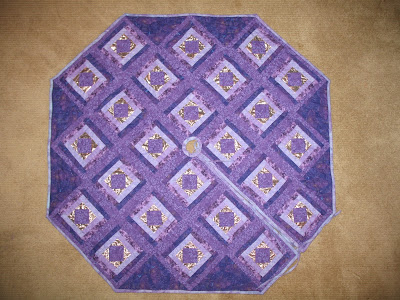 I used regular 2-1/4" strips for most of the binding, but for the centre I tried using a bias strip cut about 1-1/4" as I didn't intend to double it. I just pressed in 1/4" on each side and then pressed it in half, and made it long enough to have ties. However, that narrow of a width was not working very well, so I ended up cutting some more bias strips (had to cut three to make the length I wanted as I had little fabric left to cut bias strips from) that were 2-1/4" wide and used it doubled. That worked much better, but I still ended up cutting the circle a little larger as it was just too challenging trying to get the binding on such a small circle. I ended up making 3 sets of ties from the binding fabric. One was just the extension of the binding around the inner circle and the other two I made from double folded and pressed fabric and these were placed midway down the back opening and one at the outside edge of the opening. And here it is under the tree. The cats, of course, have already tested it. 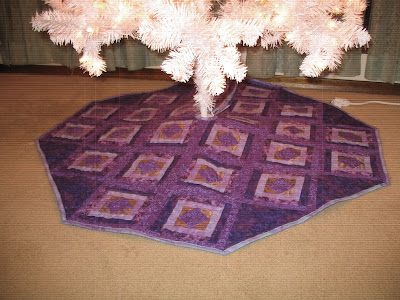 And with decorations on the tree. 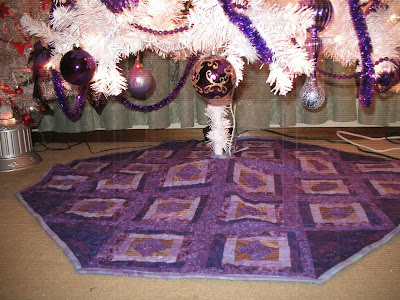 Here's a picture of the full tree. 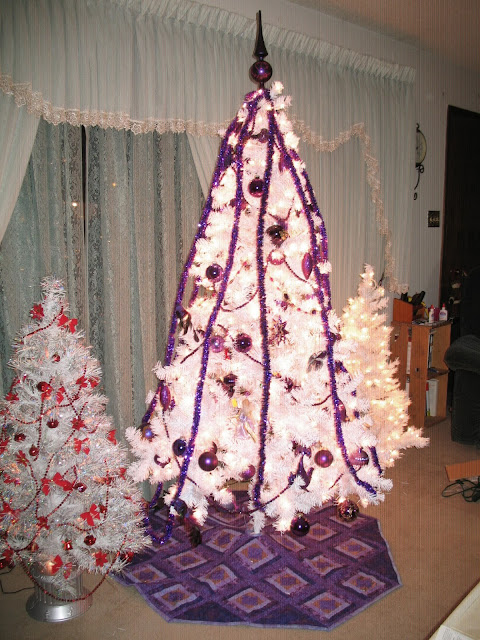 I'm not perfectly happy with the decorations. I wanted more bead garlands and some ribbon rather than the tinsel garlands. I had some ribbon, but not enough and I couldn't find any more anywhere in town. I found some purple bead garlands, but they were rather dear and wouldn't match the ones I already had.
The tree in the foreground is a white and silver fibre optic tree. I wanted to decorate the little tree in the background with blue, but could not find the right blue decorations. You can see it's getting a little yellowed with age. Maybe I should decorate it with gold, which will look good with the yellow. 😄 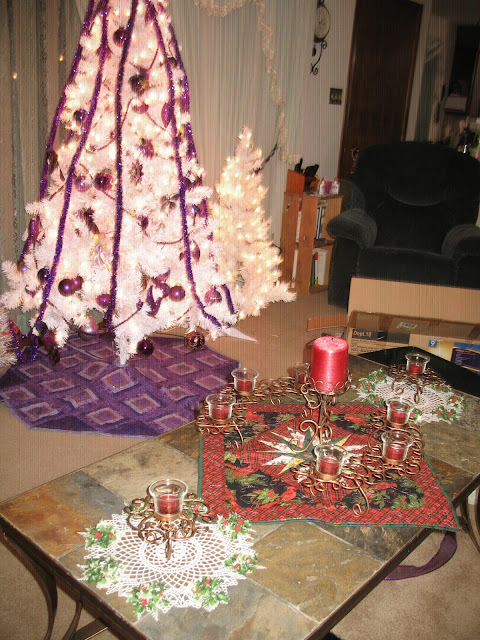 In the above picture, you'll notice that I used my Christmas Star mini quilt as a table topper on the coffee table.

Meanwhile, I got an Amazon order in the mail: some crafters' gloves to support my hands when I'm crocheting, knitting or quilting; a SideWinder bobbin winder, which I'm not entirely happy with, and a couple of sewing machine needle pads.These are for storing your needles that are not in use, so you can easily keep track of what they are. I bought one for myself and one for a stocking present for my daughter. These are going to make keeping my needles organized so much better. As for why I'm not happy with the SideWinder, it's quite cheaply made and therefore I'm afraid it might break quite easily. I also found that if I pushed the bobbin all the way down on the pin, the bobbin wound lopsided. I was able to get it to wind more evenly by not pushing it all the way down. I also can't see how it's going to save me any time or effort, unless I'm using different thread in the bobbin than the top thread. Otherwise I still have to unthread the machine in order to wind bobbins. That was a purchase I didn't think through very well. But I think it's more trouble than it's worth to send it back. So I'm keeping it.
I'm also following the Stuff Your Stocking event at both Sew Sisters and Lori's Country Cottage. I had to pay $10 to register for the one at Sew Sisters, but at Lori's anyone who subscribes to their emails can take part. I was really excited with the first email from Sew Sisters. It was fat quarter bundles for really good prices, averaging $2.00 to $2.50 per fat quarter. You were only allowed to buy one of each bundle and I was really tempted to do so. But I figured other deals were coming in the following days, so I only bought two bundles. When the next couple of days' deals came out, however, I wish I had bought more of the fat quarters as some of the deals weren't all that great, but I felt that I needed to buy more in order to justify spending the $10 to register. I ordered some colour catchers, sewing machine needles, and 1.5 metres of Kona cotton in white. Today's deals were more interesting to me - I ordered a quilting ruler rack and some Squissors. We'll see what tomorrow brings. So far I really haven't been very interested in the deals that Lori's is offering. They've been bigger ticket items and I haven't felt that the discount has been significant enough to justify me making a purchase I hadn't planned on. If it was something I had already been hoping to buy, like a 9-degree ruler, then I might be more tempted.
And more on the home front: I think I mentioned before that in my daughter's aborted attempt to paint the front of my house, she took down my house numbers and I haven't seen them since. After asking her for them more than once (I assume she lost them), I bought some new ones. Tonight, being the last day of reasonable outside temperatures, I decided I'd better get them up or it would likely have to wait for spring. As I was messing around with Christmas trees and shopping for more decorations for a good part of the day, I didn't get around to it until after the sun had already set and the temperature had started to drop. Plus the wind had picked up and snow had started to fall. I think it was about -7⁰C with a wind chill factor of -17. Nasty! I did remember to plug my block heater in when I got home as the temperature is supposed to plunge overnight. Not something I'm looking forward to. I could tolerate winter better if we didn't get such extreme temperatures, especially with the wind chill. Well, at least my house numbers are up now. However, I still haven't put the front railing back up yet (my daughter also took that down and disappeared with the screws), but since I seldom use the front door, that can wait until spring.
Posted by Laura B at 19:05