The Book:
The Project: Mini Patchwork Ornaments - Monkey Wrench, p. 122
The Rating: Intermediate
For my next project from this book, since I still need to decorate my 4' white tree, I decided to make some patchwork ornaments. There are 3 different ornaments and I chose to start with the one that I figured would be the most difficult: the monkey wrench. I may be wrong about that however, as I have discovered that there are Y-seams in the bow tie block. <sigh> Maybe I can figure out a way around that.
There are templates for these ornaments. I'm not a big fan of templates: trace, cut, trace, cut - a lot of duplicate work. I'd rather just measure and cut. So I attempted to do just that. Ugh, instead I made a mess. And somehow they seemed to be turning out bigger than they were supposed to. I think maybe I was trying to overcompensate for the tiny size of the pieces (centre squares = 1/4" finished size) and made too scant a seam allowance. And probably lots of other errors. And so I finished them up without the final triangles. And I also realized that I hadn't lined up the dark and light fabrics correctly to actually see the pattern. First of all, for some of the dark centre squares, I cut a section of the fabric that was actually lighter, so it didn't show a good contrast between the light and the dark. But then I was so focused on actually making this block work that I wasn't paying attention to where the dark and light needed to be and they really don't look like a monkey wrench at all. And I wasn't going to start trying to rip out stitches on those tiny little pieces of fabric. 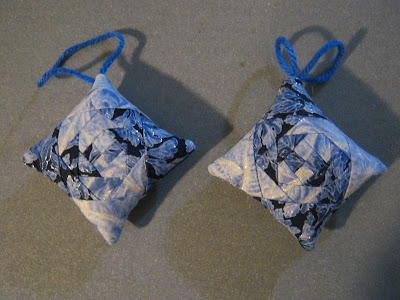 So I finished them up, using yarn for the hanging loops since I had neglected to buy ribbon.
They're both different, but neither is a monkey wrench. Maybe I just invented a couple of new blocks.
I decided to try once more, only this time using templates. One thing I did change, however. The template patterns in the book had the corners cut off of the triangles. I didn't like that. Even though the corners would later be removed, I find it helps to position the pieces properly by leaving them on. So I did, and I used a different fabric for the dark. My third attempt turned out much better, and I was doing quite well getting the colours in the correct places. Until the final triangles. I think my brain went on a mini vacation and somehow I misplaced the last triangles. And I didn't notice it until I had finished the ornament. And I wasn't about to rip it all apart again. But my perfectionist nature is not happy. LOL!

And in the mess that is my sewing room, I managed to find some blue ribbon to use as a hanging loop. This one is substantially bigger than the other two, and really a little too big for the size of the tree. But, in spite of my mistakes, I'm pretty happy with my first attempt at patchwork tree ornaments and the challenge of working with such small pieces.