This quilt was inspired by the Ring Around the Posies quilt pattern that appeared in the fall 2013 issue of Fons & Porter's Scrap Quilts. 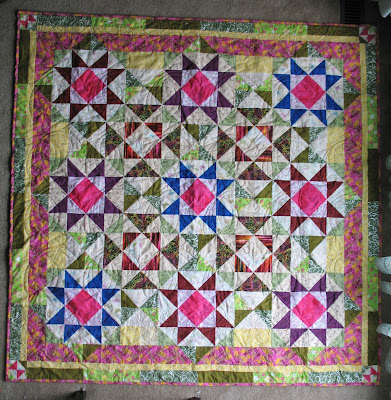 While I liked the pattern, I had a couple of issues with it. First of all, it called for 28 fat quarters of fabric! That's in addition to 2 more yards of fabric for the top and 3-3/4 yards for the backing. Wow, that is a lot of fabric for a quilt that is only 60" square. And why should I use 6 fat quarters for something that should only require 2? I would end up with lots of miscellaneous pieces of fat quarters, and I really don't like that. If I can, I like to use as much of my fat quarters as possible. Unless I'm going for a really scrappy look, why would I want to use so many random fabrics? And that's my second issue. I really don't like how ultra scrappy this quilt looks in the magazine. I can barely discern the pattern. It just looks like a bunch of random triangles thrown together. I like some continuity in the pattern so I can actually see it. There's really no place for the eye to rest on this one. So I switched it up quite a bit to make my version.
Since the centre of each block was 4 pink triangles forming a square, I decided to make it a solid square. Whether you're doing it my way or according to the pattern directions, you still only need one fat quarter of pink, not 6 as the directions state. Maybe 2 or even 4 if you want some contrast. 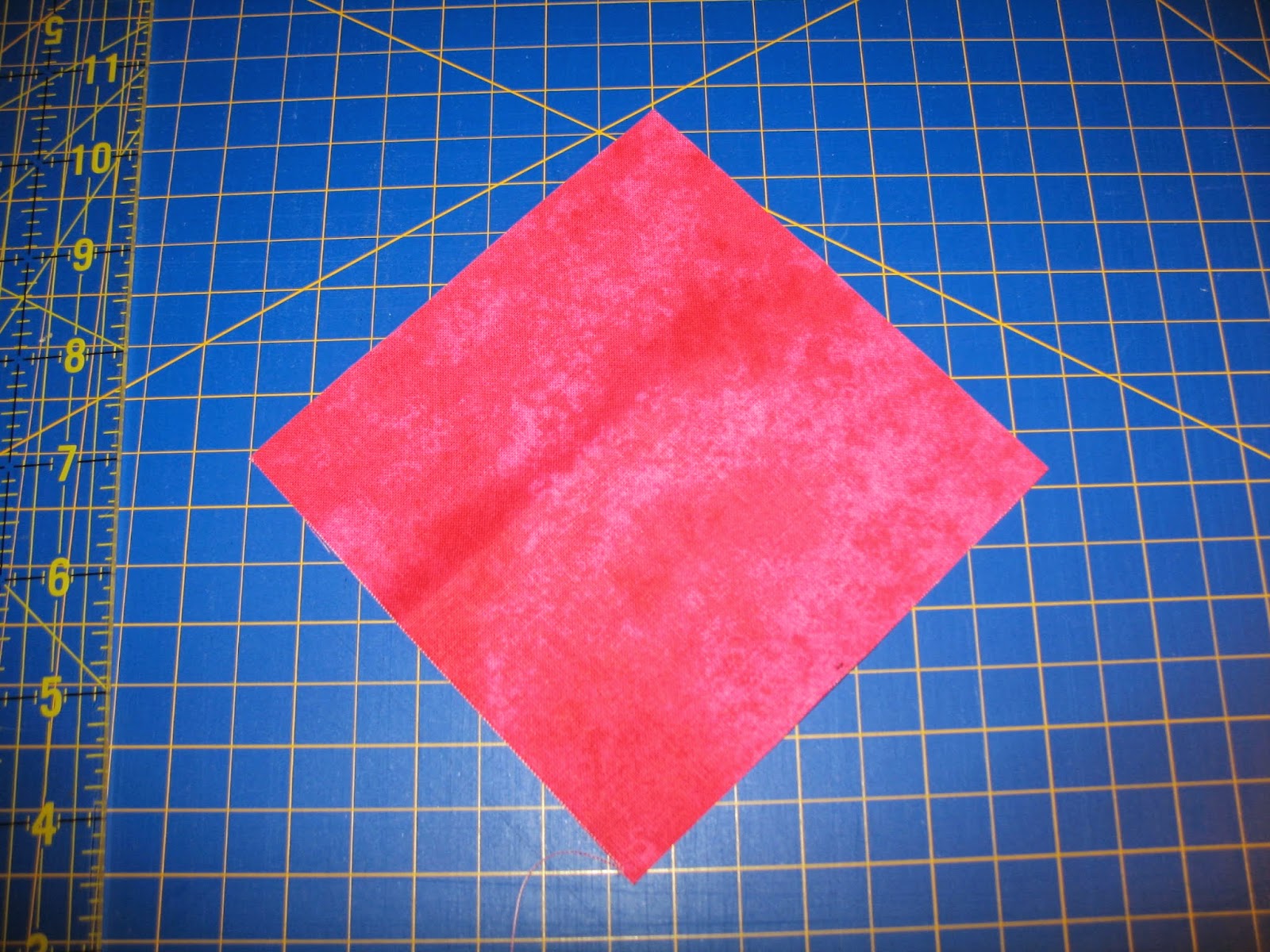 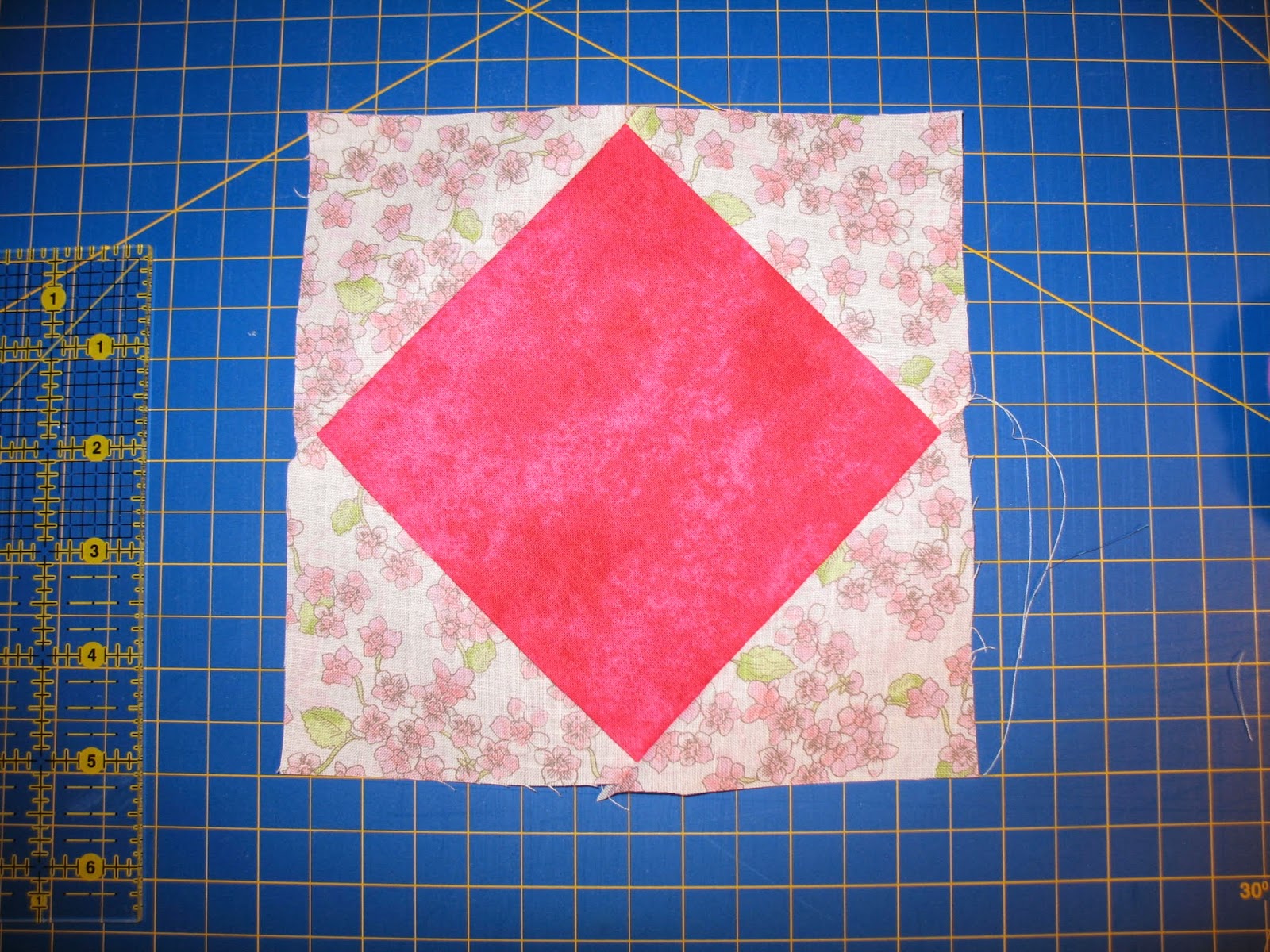 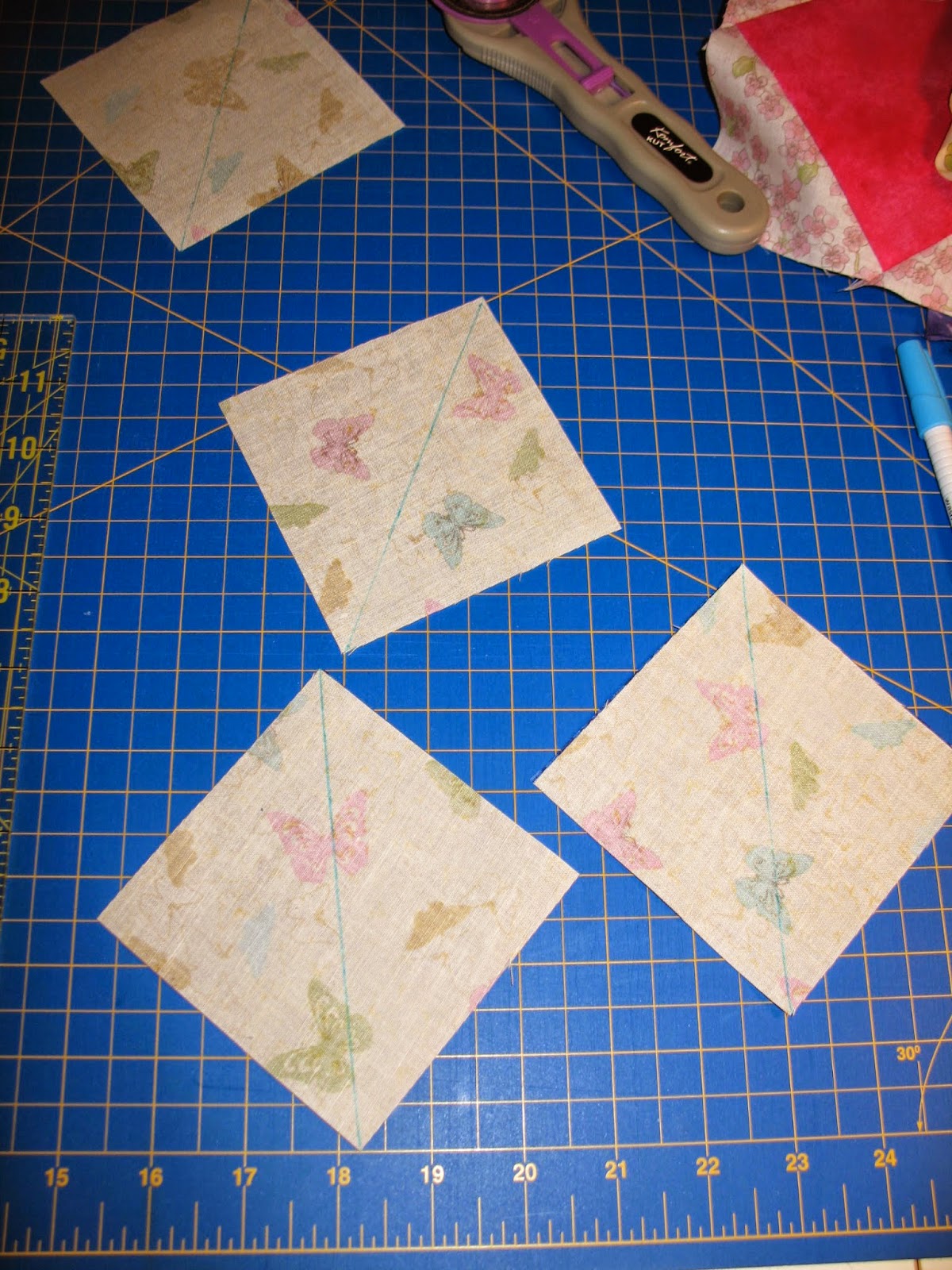 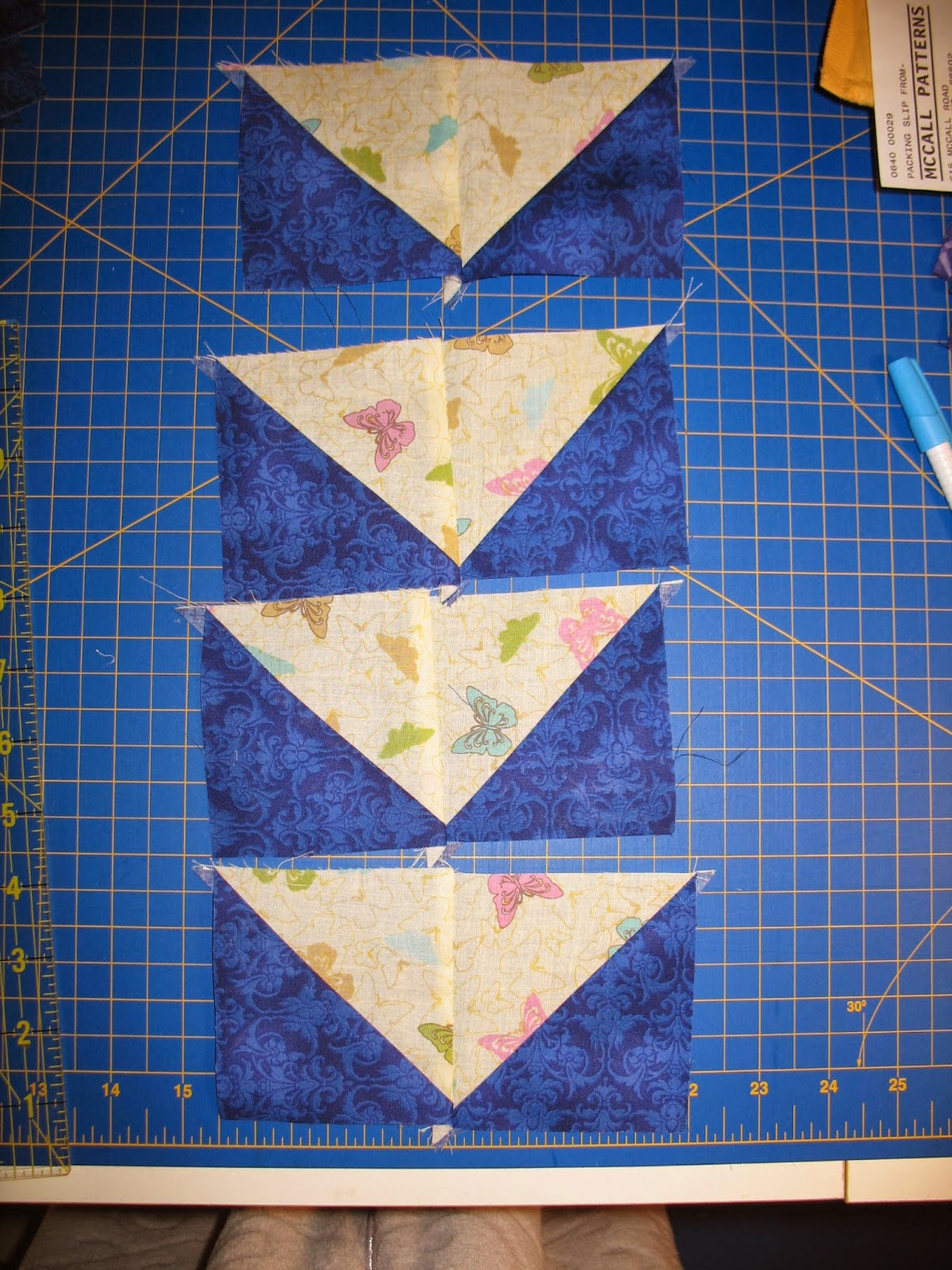 These could have been done as flying geese units as well. 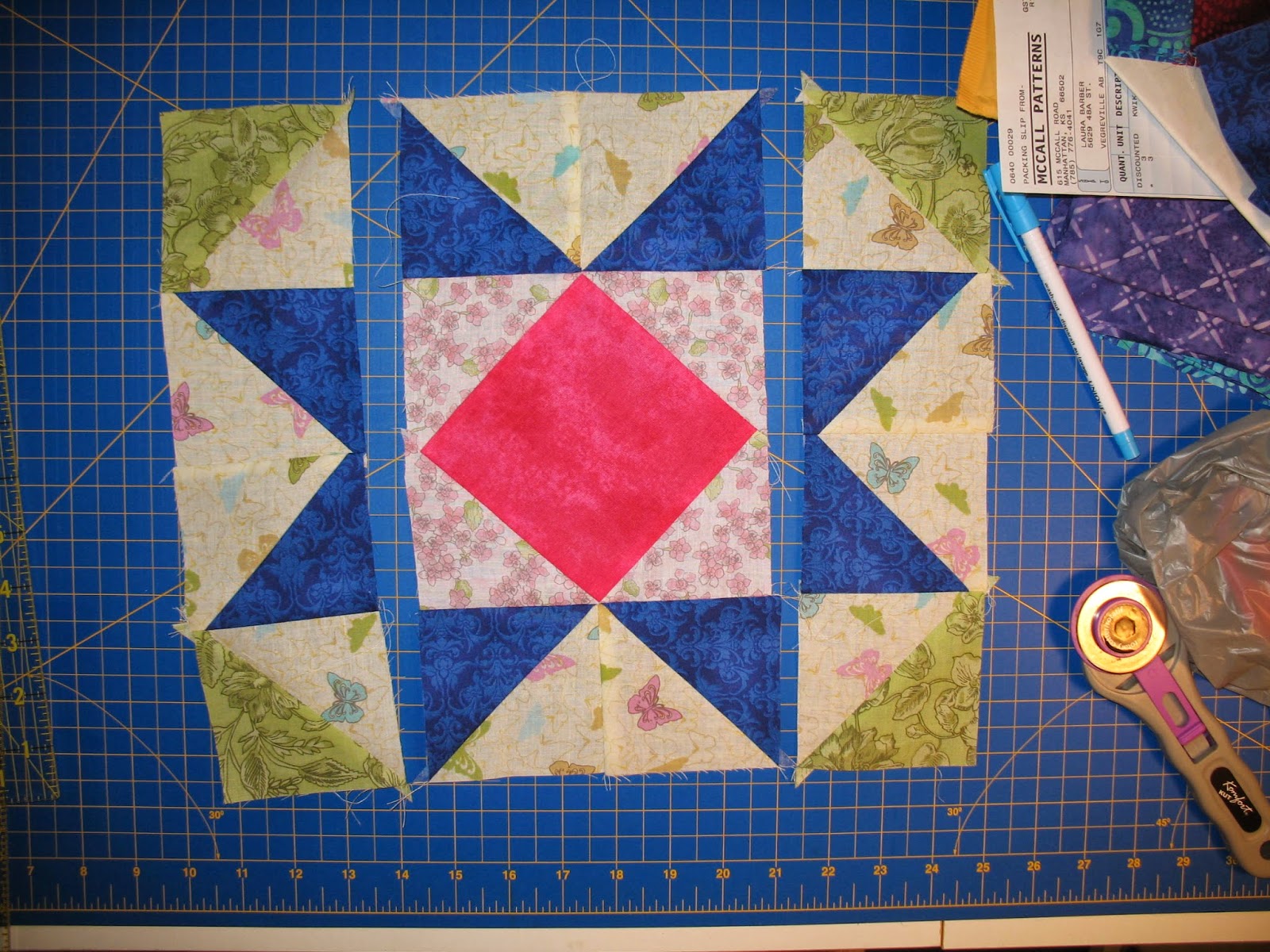 I used the same light fabric to complete the corner units for each block. Remember I'm using three different light fabrics in these blocks. I also chose to pair each dark with the light that I felt it looked best with, and used that pair consistently throughout the quilt, but you could switch it for the different blocks if you wanted more variety. Alternatively, you could use three fat quarters of the same light and dark to have a more homogeneous appearance to the quilt. 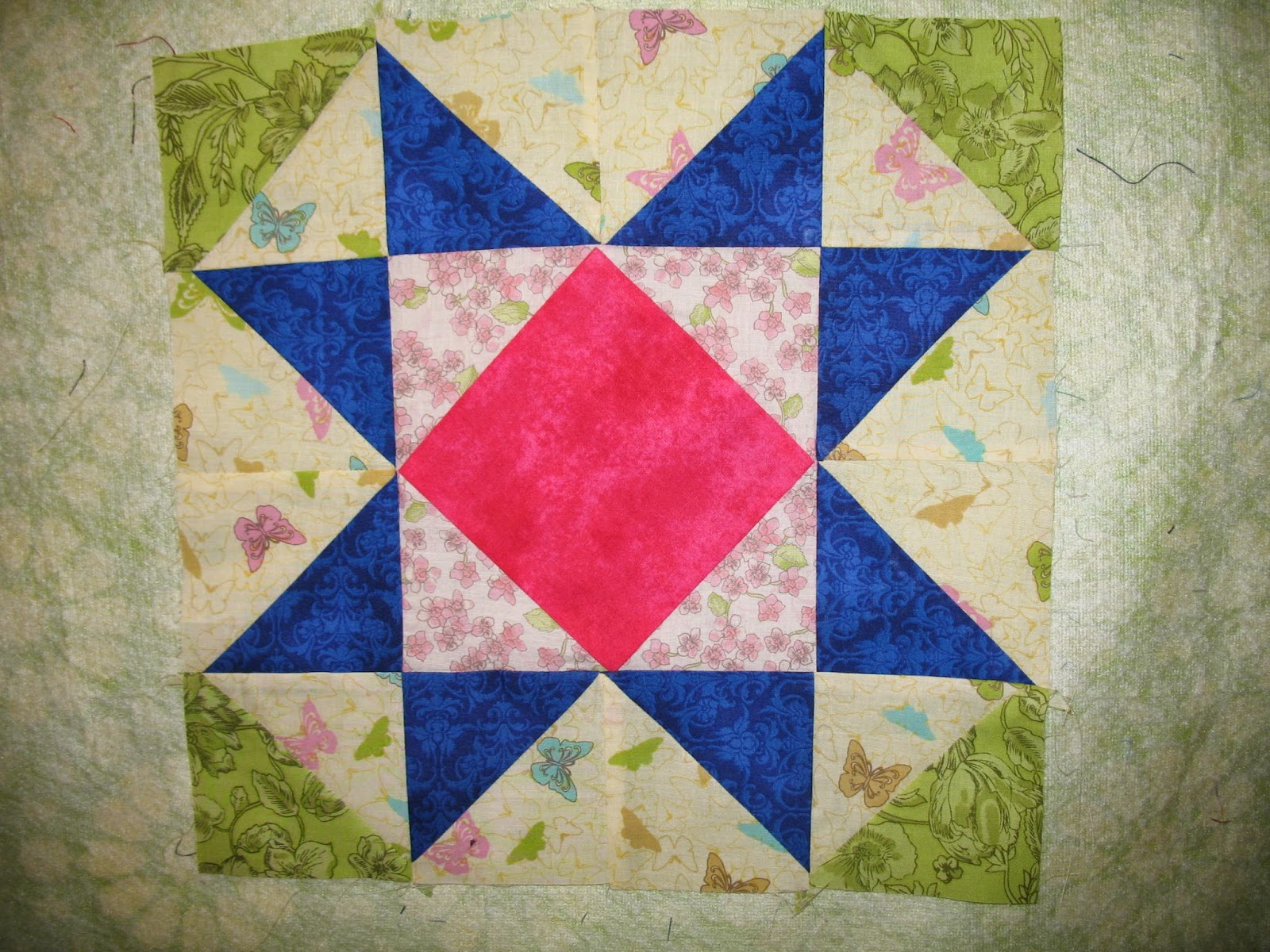 This is my version of the basic block unit. I'm sure it's named some kind of star, but I don't know what. The actual pattern is a version of Broken Dishes, set at an angle, but since I made the centre solid, I guess my dishes aren't broken. LOL! Hence, the name I gave this quilt: Unbroken.
I had to decide what to do about the other greens I needed in this quilt. I had two fat quarters of the same green which would have been sufficient to do all the other points on the block, but I also wanted to make sure that I could carry some of the same colours into the green part of the border, so I used three different fabrics in these points. Here's the actual (un)Broken Dishes block: 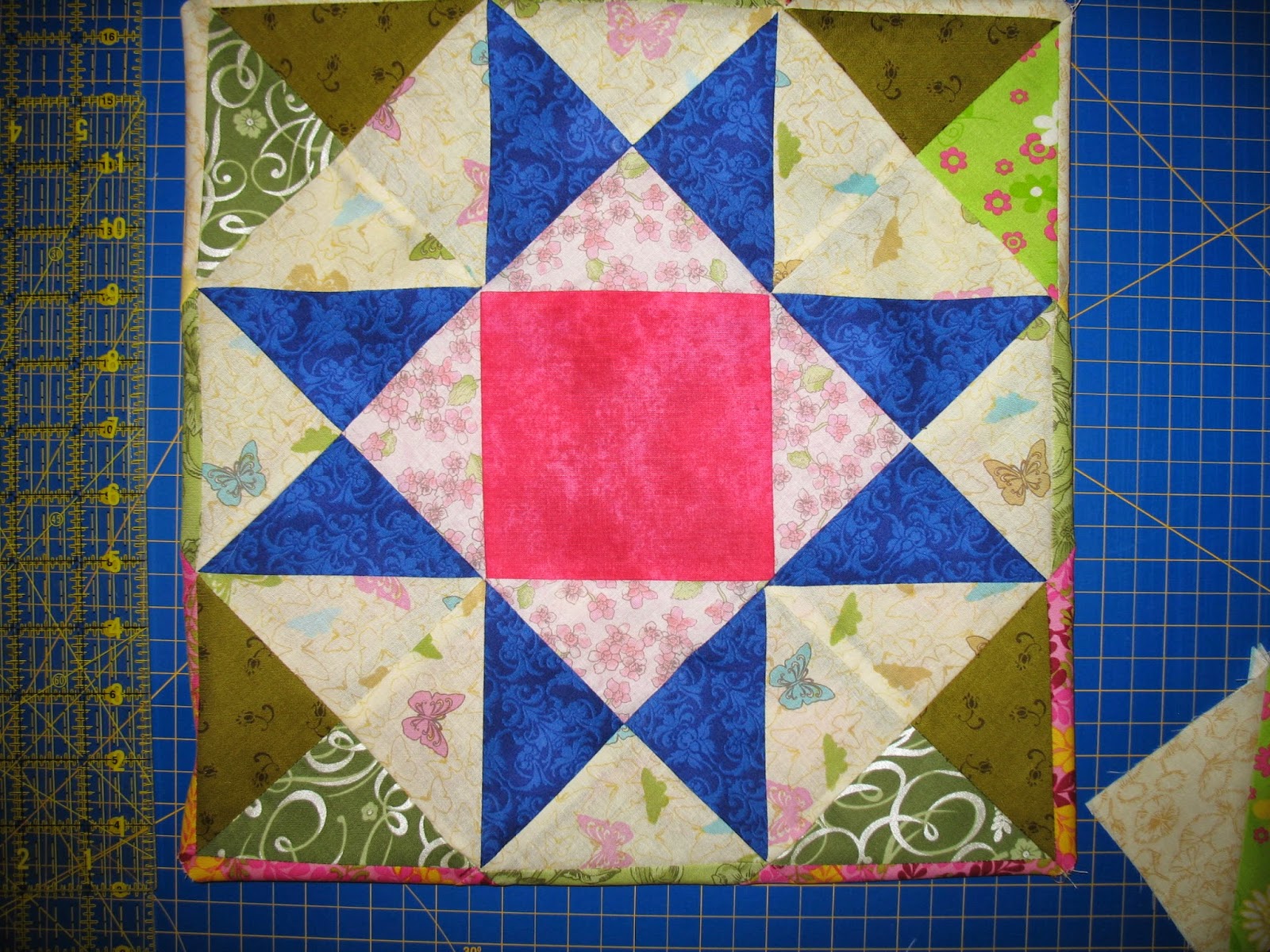 As you can see, it's the same block as in the above picture. I just added more pieces and then folded back the portions that weren't part of the broken dishes block. Here's the whole section: 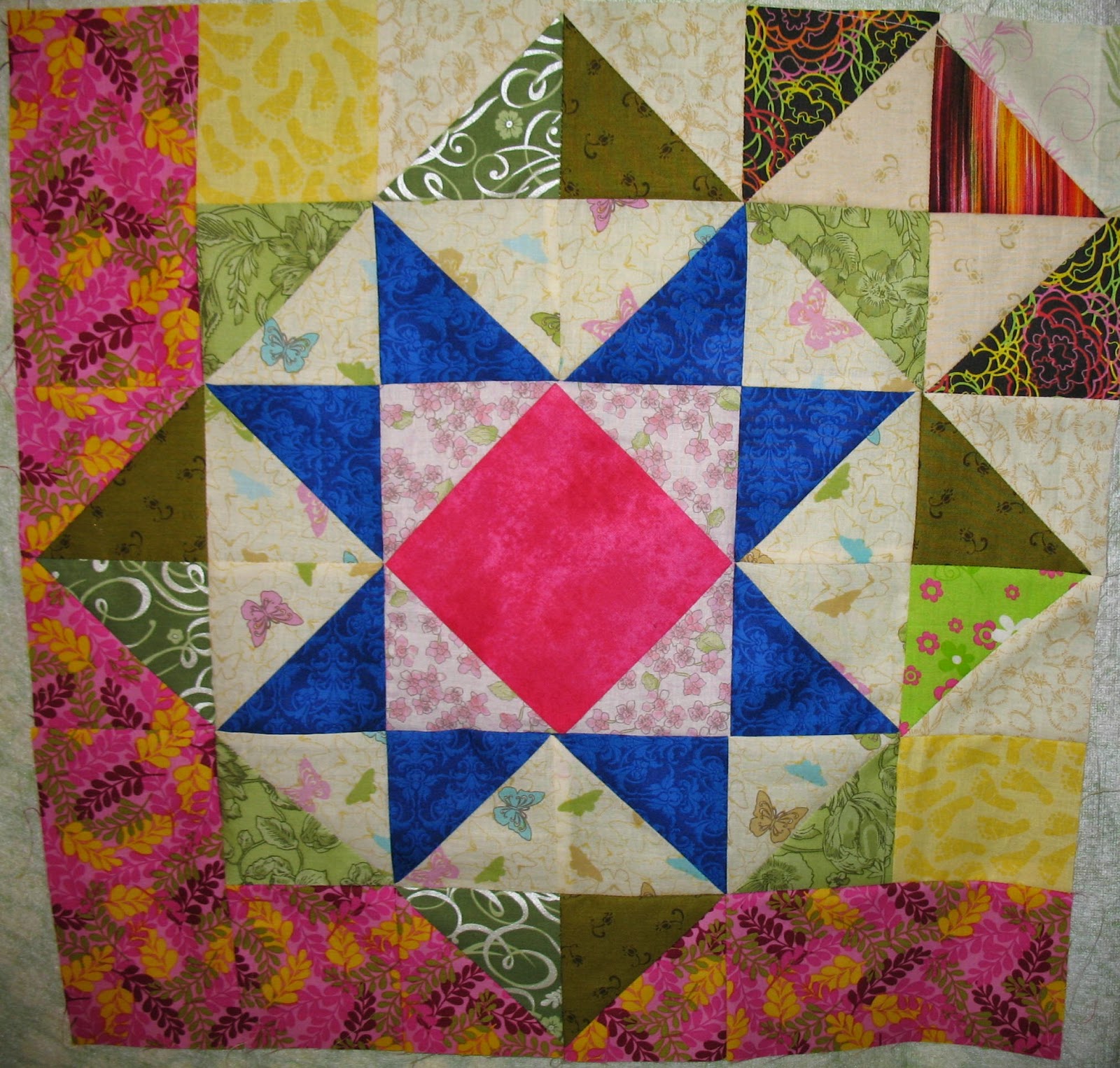 This is a rather complicated quilt to assemble, making sure I've got all of the right pieces in the right places. I ended up assembling it in 9 - 18" sections, like the above, laying out one section at a time on my cutting table.
If you look carefully at the finished quilt, you can see that there's a secondary block - I call it a wreath block - in between the Broken Dishes blocks. It probably has another name, but I'm not about to spend a lot of time looking it up. 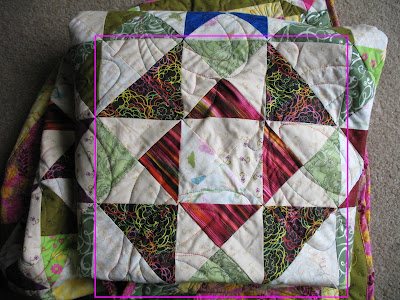 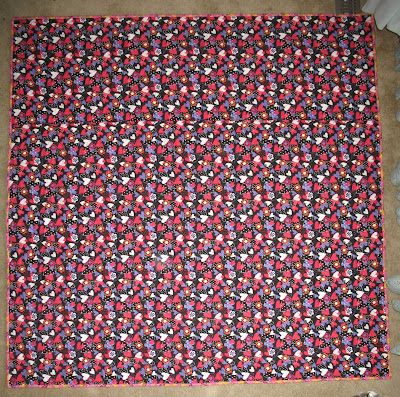 I'm still not entirely pleased with the end result. While I do like it better than the one in the magazine, I still think maybe it's a little too scrappy for my tastes. But, since I'm giving it away, as long as the recipient likes it - that's the important thing.
And speaking of the recipient, this is going to a friend who has gone through a lot - physically and emotionally - so the name of this quilt is my wish for her: that she remain Unbroken.
I actually finished this quilt top in 2014, but quilting it has been an adventure. After spending $150 (ouch!!!) to quilt Far Above Rubies on the longarm, and taking a machine quilting course, I decided to try quilting it on my domestic machine. I basted it using a quilting gun, which was very quick and successful, except where I basted it to the carpet. (That was the one and only quilt I used the quilting gun on, because the next time I tried to use it, it went kaput. I didn't know it was a single use quilting gun). I used a stencil to trace a pattern on the centre block to start. The quilting results were disastrous and I labouriously picked out every stitch. I set it aside as I had other projects to work on, and didn't get back to it until I discovered that my LQS rents their machines for $35 per quilt. I then had to cut out all of the quilting gun tacks I had put in because I didn't need those for quilting on the long arm. I decided to try computerized quilting, selecting a butterfly pattern (actually I used 2 separate butterfly patterns in this quilt) and let the machine do its work. I only had to cut off the thread and then punch the button to start the next butterfly. Really lazy quilting. Or so I thought. And I didn't really like it. It was actually slower than I could do on my own and I didn't find the pattern really any neater done by the computer than when I use a pantograph. That was back in March and I didn't get around to putting the binding on until today. When I flipped it over to trim off any loose threads, I discovered that the top thread tension had not been great and there were several sections with big, long loops of thread tangled up on the back. Ugh! More stitch-ripping to do, plus re-stitching on my domestic machine. I doubt I will do computerized quilting again.
Posted by Laura B at 14:06

Email ThisBlogThis!Share to TwitterShare to FacebookShare to Pinterest
Labels: quilting