Bushwhacking and other Unladylike Pursuits

As a single home-owner, I have had to learn how to do things that I never learned in Home Ec. Or nursing school. It wasn't that long ago that power tools intimidated me. Hand tools can be dangerous enough, but add some power to that and they can do an incredible amount of damage in a short period of time. So I left the heavier stuff for my husband. When I had one, that is. Not that he always got it done, but that's another whole subject. After all, he worked in construction (at least he did for the first half of our marriage. He later became a truck driver), so he not only had the tools, but he also had the expertise to use them. But then I got a divorce and eventually bought my own house. And unfortunately, houses are not self-repairing. And it would just be altogether too time-consuming, if not impossible, to do it all with hand tools. And it would also be too expensive to pay someone else to do everything that needs to be done, even when it can be done with a hand tool. I have installed a deadbolt, a doorknob, a programmable thermostat; hung curtain rods, blinds, mirrors, towel bars, replaced a toilet seat (after having to use a hacksaw to cut off the rusted bolts on the old one); removed, cleaned out a replaced the p-trap on the bathroom sink and changed the oil and filter on a lawn mower. And trimmed trees. In order to accomplish all this, I had to invest in some power tools. I now own power drills, power screw drivers, an electric hedge trimmer, jig saws and circular saws. Have I missed anything? Yes, I finally had to break down and buy the granddaddy of all power tools - the chainsaw. I had used hand saws to trim trees, but that's a pretty labourious method. And I had lots of dead limbs and low-hanging branches that needed to be dealt with.
One of my nursing colleagues (someone who enjoys doing home renovations) said that she bought herself a little chainsaw that came with a pole saw attachment. So I decided that's what I would get. I bought it last summer. Yes, I admit, it's just a baby chainsaw, or what I refer to as a lady's chainsaw, with a 10" blade (I think), but it still can reak a lot of havoc. After reading the instruction book, with all its attendant cautions, I was really nervous about using it, so I started by using it as a polesaw. I figured that if it somehow went out of control, I had the entire length of that 10' pole to escape injury. I soon found out that wasn't practical, however. It's challenging enough hoisting the weight of a chainsaw directly in your hands (a compelling reason why I don't use anything powered by gas when I have to carry it around - I don't need the added weight of the gasoline) - much more challenging when it's at the end of a pole. (My colleague must have much better arm and shoulder muscles than me). I then took that baby in my hands and cut my first limb. Tree limb, that is - not human limbs, thank the Lord.
This year, I decided I needed to tackle the pin cherry on the west end of my house (or maybe it's a choke cherry). Before I even knew what was wrong with it, I had used my hand saw to remove one or two branches that appeard diseased. Now I know it's black knot, and most of the tree is infested with it. I got an estimate from an arbourist (or whatever you call them) on trimming out the infected branches - $300-400. Removing the whole tree would cost me $700. That was already a year and a half ago, and he told me it was the wrong time of year to do it anyway. Meanwhile, my niece's husband borrowed my chainsaw to cut down one of his cherry trees that was infested, and then volunteered to do mine. But life has a way of getting ahead of us, and he still hasn't had the chance to do it. So I started the job. 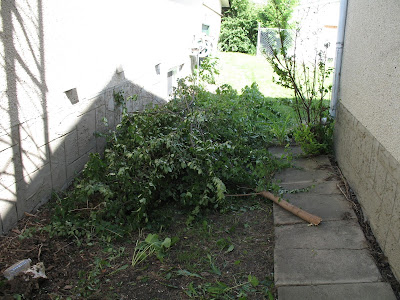 First I tackled a small tree and a shrub that had sprung up of their own volition where I didn't want them. Then on to the pin cherry. I was only planning on doing one limb, but when I cut the first one down, it got caught on another limb, and so I had to cut the second limb as well. 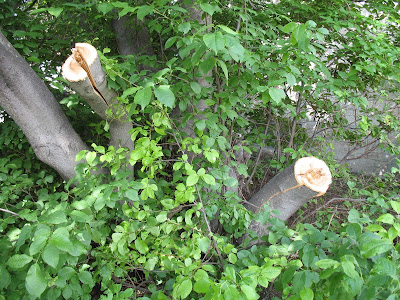 That's as far as I've gotten and that was a lot of work, because I then had to trim the limbs down to more manageable sizes. Here's one pile of branches. 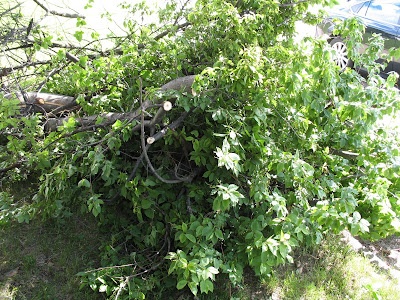 And here's the other pile. 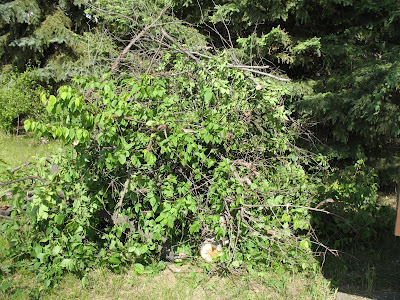 And that's not including the pile from the first tree I cut down that's still sitting between the houses. And all of it is still waiting to be loaded up and hauled to the dump. And then I will have to start on the next limb, until eventually I have the whole tree down and hauled away. I really don't think there's enough healthy tree left to salvage it, which is too bad. My bedroom window faces west, and the neighbours across the street. So I will now have less privacy and more heat in my bedroom from the sun during the summer. But it can't be helped.
I will admit that I am proud of the fact that I can tackle these big jobs, considered traditional man's work. I am not so much of a feminist, however, that I can say that I actually enjoy having to do them. They're just something that needs to be done, and if I don't do it, it won't get done.
Okay, I'm going to be really frank here and say that honestly, there are times when I would really love to have a good man to help out around here.
Now for the comical part: As I was buzzing away with my chainsaw, a man walked by with a baby in a snugli. In a pause between buzzing, I said hi to him, but he didn't reply. On his way back, I once again greeted him, this time with just a smile. Again, no response. I can only conclude that he is either a snob, or is intimidated by a woman with a chainsaw.