There's more to being a good photographer than just snapping a few pictures. 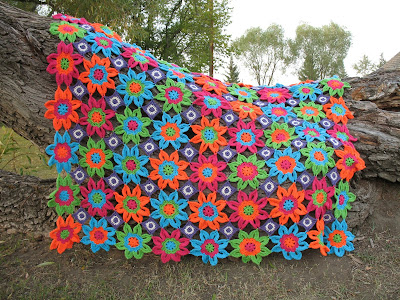 Years ago when my sister-in-law was married, she and her groom hired a friend who was an amateur photographer to do the wedding pictures. Now, I have nothing against utilizing the services of an amateur or hobbyist. My brother-in-law Lawrence has done numerous weddings for family and friends, with good results. He finally had to refuse to do wedding photography so that he could actually relax and enjoy the wedding. While even professional photographers will have a few duds (why do you think they take so many shots of the same thing?), this particular photographer didn't seem to have a clue about staging a photo. He didn't seem to know how to use the environment to its best advantage in the pictures. And I distinctly remember him taking a lot of the outdoor pictures with the subjects facing the sun. Having fancy and expensive camera equipment does not a photographer make. It also requires some skill and know-how.
I have never claimed photography as one of my skills or hobbies. However, I do like my pictures to have an overall pleasing effect. Whenever possible, I like to compose them so that they have eye appeal. While I like to have at least one "whole project" picture of each of my craft projects, I've also started to try some shots with more interest. It started with this peacock chair. 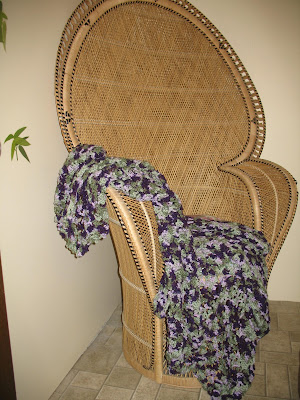 I really like this chair and bought it at a yard sale. However, it's not really practical as a chair. It's not particularly comfortable and it takes up a lot of space. I considered getting rid of it. But it makes an awesome prop for taking pictures of my quilts and afghans. And so I kept it. Then I picked this chair up at a thrift store. 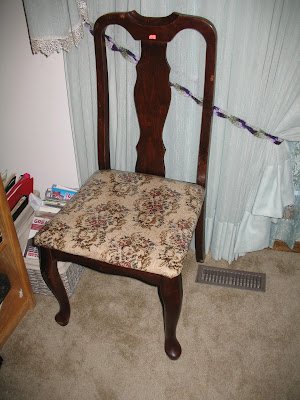 However, I soon learned that this one would not work for anything bigger than a crib quilt, 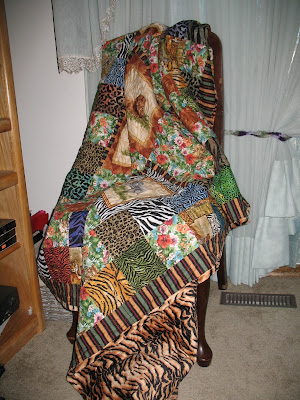 as the chair pretty much disappeared. Here it is with the Scappy Shine quilt, my childhood teddy bear, Yogi, and a tin I have for sewing supplies. 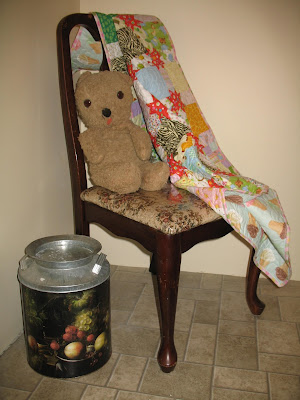 When I started the Sophie's Universe CAL, someone on the Official CCC Social Group on facebook suggested that we post pictures of our Sophies outdoors. So, once she got to a reasonable size, I dutifully took my Sophie to our local park. 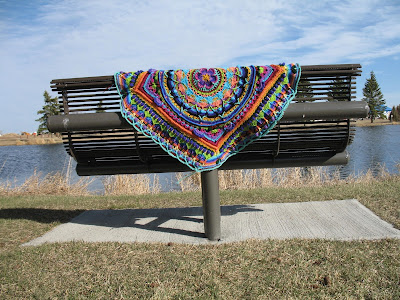 It was a windy day and I didn't have anything to hold Sophie in place, aside from her own weight, 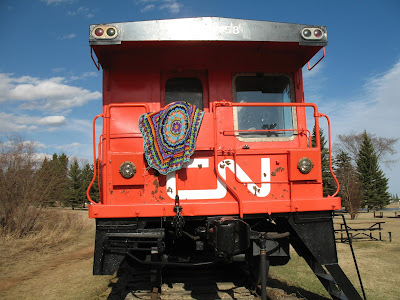 so some of my picture-taking attempts were not that successful. Nevertheless, 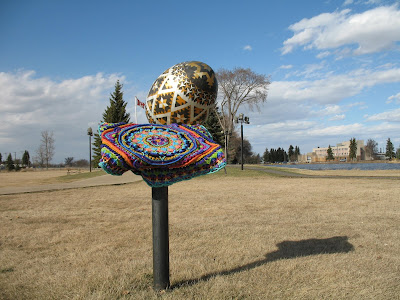 for a small town park, it did provide me with some good venues for photography. 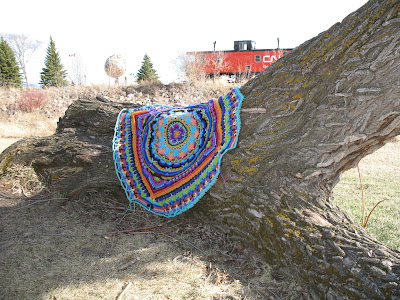 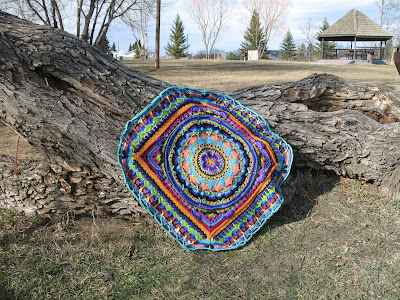 and a friend responded that it was such a good picture that it should be on the cover of a quilting magazine. I will forgive her for not recognizing it's an afghan, not a quilt.
Next I posted my progress on the Vivaldi Throw 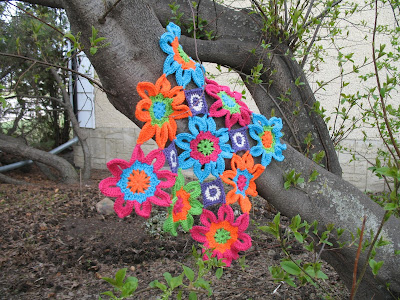 with pictures taken in my own yard. 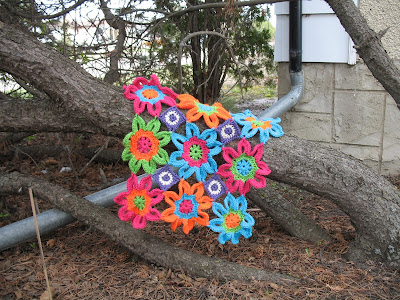 Another friend saw these pictures on facebook and offered to buy Vivaldi. Instead, it became a gift for her 50th wedding anniversary. When it was finally finished, I blocked it in my holiday trailer 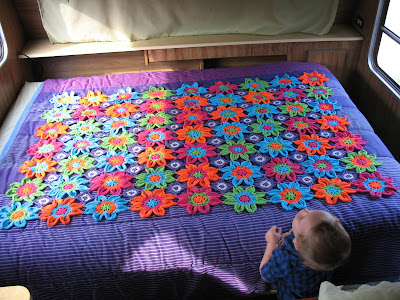 and took the first picture of the completed afghan (my grandson in the foreground). Here's a closeup: 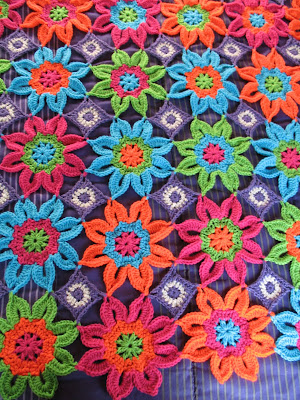 I took it to the park as well. 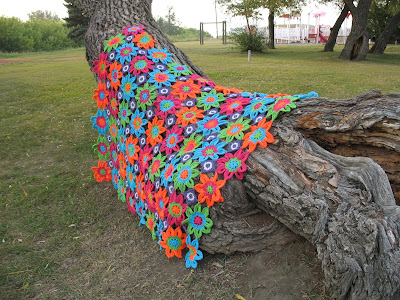 And snapped a few photos. While I was taking the photo below, a woman called out from the other side of the river (over which this bridge spanned), saying what a beautiful afghan it is and could she take a picture as well. 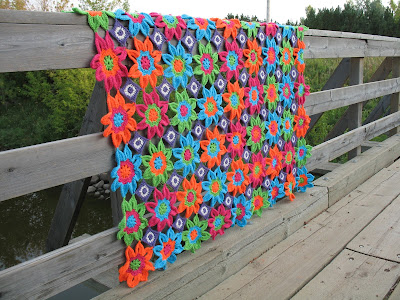 So I allowed her the privilege, and encouraged her daughter, who had learned to crochet, to continue the hobby. The following is my favourite of the Vivaldi Throw. 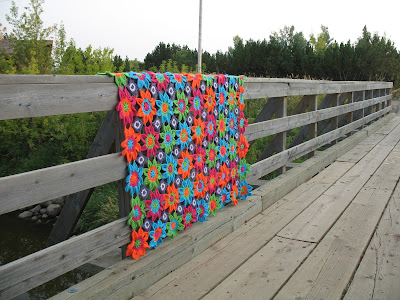 So if I ever get tired of nursing for a living, maybe I'll try craft photography. :-)
Update on other projects: I've finished both sides of the Feileacan shawl and just have to finish the celtic knot butterflies for the centre back. For the choo-choo train afghan, I still have to add fringe to one end and crochet and applique the train cars. I haven't made any recent progress on the train cardigan and the cowls are on hold until I get these other projects done. As far as the renovations go, I supposedly hired someone to finish them, but he said he said he'd get to them in a week to a week and a half and that was about a month ago. I haven't heard from him since. I may just have to go ahead and try to complete them myself if I ever want my house in order again. Now that Sophia and Damian are living under my roof, it's even more important.
Posted by Laura B at 11:18