As I was driving into the city for the second time today, I couldn't help thinking, "I must be crazy." No, not because I was heading into the city for the second time in one day (although that may not be considered entirely sane), but because I was taking along my 3-year-old grandson, Damian, and my 9-year-old great nephew, Richmond, on a trip in which I planned to go to Michael's and Fabricland. Not exactly places to which you normally take little boys. Sure I was going to Home Depot first, but that was just to drop off the nailer we had rented on the first trip in that didn't work. More about that in another post.
I grew up in a family of girls - 6 of us with only one brother. I had only had one child, my daughter Sophia, so dealing with little boys is not something I have a great deal of experience with. And here I was taking two of them to stores that are more traditionally women's turf. And definitely not children's turf. And then there were the more practical things like how was I going to manage going to the bathroom?
It started when my niece's husband came over to install my baseboard with Richmond in tow. Richmond is old enough to stay out of his father's way while he was working, but Damian is not, yet he wanted to be where Richmond was. I couldn't be downstairs watching him as I wanted to return the non-working nailer and make the most of the second trip by visiting Michael's and Fabricland. Sophia had a friend visiting, so she didn't want to have to sit downstairs in the "construction zone" to monitor her son. Damian is almost always game to go wherever Grandma goes, so he was willing to come with me, but wanted Richmond to come along. After getting permission from Richmond's father and making sure he had a jacket on, we headed out on the road. And it wasn't till we were well on our way to the city that I realized what a crazy thing I'd done. It was as I was listening to the interesting noises emanating from the back seat. Those were definitely not little girl noises...
In spite of my trepidation, the trip went well. At Michael's, Richmond decided he wanted some yarn, so I asked him if he wanted to learn to crochet. After receiving an affirmative response, I let him pick out some yarn and I selected a crochet hook for him. Crocheting lessons coming up... Damian, of course, couldn't be left out, so I allowed him to select a skein of yarn as well, even though I've already given him a ball of yarn and a hook. So nice of Michael's to be having a sale on Red Heart Soft yarn, exactly the yarn called for in the pattern for October's Fair Isle Crochet Cowl. Here's my haul from Michael's. 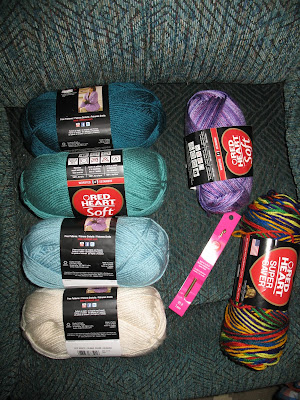 The yarn on the left is for the cowl. The purple variegated is the one Damian selected and the Red Heart Super Saver in fiesta is Richmond's. Now I need to find a single skein beginner project for Richmond to start on.
Fabricland was our final stop. Let me explain the purpose behind this particular Fabricland visit. A couple of friends at work have been admiring my quilts and wanting to learn how to quilt themselves. Initially, I was going to invite them over once I get my studio finished. But then I got to thinking that there may be others who would like to learn. I remember I looked for a quilting class in town way back when I wanted to learn and ended up having to learn from books and magazines. So I decided to see if there would be interest in a class. I contacted our local "Learning Network" and offered my services as a quilting instructor. Now I have to draw up a proposal outlining the materials needed, how much I would charge, how many nights, etc. So I figured I needed to start by designing an appropriate quilt for a beginner and then making it. I actually decided to make two samples. For the first sample I decided to use some fabric from my stash as the feature fabric and bought some coordinating fabrics at my LQS. Here's the fabric for the first quilt: 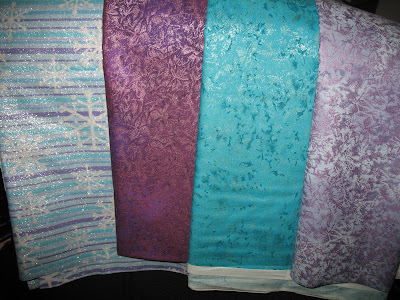 The fabric on the left is the feature fabric, Snowflake Stripe by Michael Miller. The other fabrics are Michael Miller as well. While at the LQS, I finally decided to break down and purchase an annual membership. It's rather expensive, $100, but it gives you 40% off everything all year, even on most sale items. I calculated I need to purchase $250 (pre-discount) worth of fabric and supplies to pay for the membership. I plan to keep track to determine if the membership is worthwhile. With the increased exchange cost on the Canadian vs. US dollar, I won't be buying as much online. And trips to the city can get costly in both time and money as well.
So back to my trip to Fabricland... In the latest flyer, they had some animal prints on sale and I wanted to do the second quilt where I fussy-cut the feature squares. So I wanted to see if these animal prints would work. Unfortunately, my closest Fabricland did not receive any of these prints. But they did have some other ones on sale for a couple of dollars/metre more. I opted for an African animal print. I'm hoping the other two prints look sort of "African native." And the third embroidered fabric just more or less coordinated with the two prints. 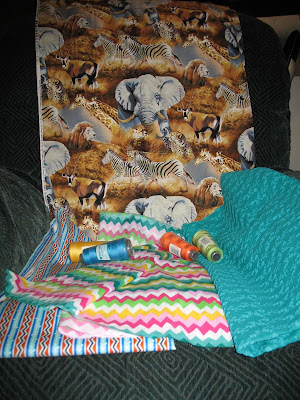 I also picked up some serger thread in bright colours as I want to use them to edge the samplers I made in my machine quilting class.
By the time I was paying for my purchases, Richmond and Damian were starting to get on each other's nerves and Damian was getting a little hyper as he was overdue for a nap. Once on the road back home again, he was asleep within 5 minutes.
While I was taking these pictures, my grandson wanted to get in on the act and was quite enjoying piling the yarn on his lap. Then I sat him in the chair with the animal print in the background and the other fabrics on his lap. He was quite happy with that, but got rather tearful when I took him out to take a shot without him. He has decided that that fabric is his, especially the animal print. So he's back in the chair with the fabric. I also got out the Go Wild quilt to see if he'd take that instead, but he just wanted that added to the pile. 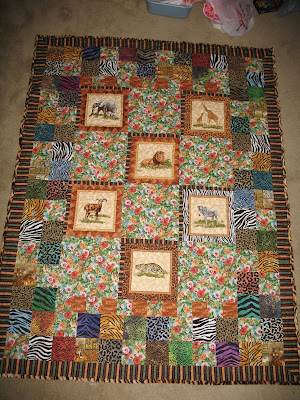 He's now contentedly making animal noises in the chair with all the fabric and the quilt. I guess when the new quilt is not being used as a sample in class, it will likely be his quilt. Unless I can convince him to take a dinosaur quilt instead. My LQS has a kit with a dinosaur panel and 6 - 1/2 metres of coordinating fabric. He really loves dinosaurs and I was thinking of making him a twin-sized quilt for his bed out of that.
Meanwhile I finished the Entrelac Crochet Cowl a week ago. It calls for a 4 (worsted) weight yarn, but I was in Michael's and they had Loops and Threads Charisma yarn, a 5 (bulky) weight on sale and I was inspired by the Bouquet colour. So I decided to give it a try in this pattern. Since Entrelac uses single crochet, it is pretty dense and stiff, especially with the bulky yarn. I was hoping that rinsing it would soften it up, but when I took it out of the washing machine, it was almost plank-like. LOL! Here it is being blocked.

After sewing up the seam, I tried it on and snapped some pictures. 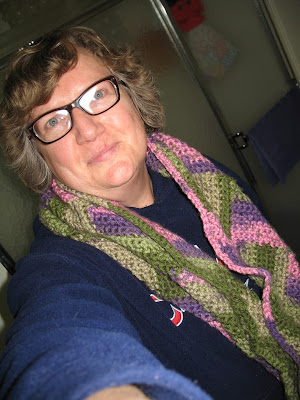 It's a rather long cowl and the pattern showed it wrapped around the neck twice. 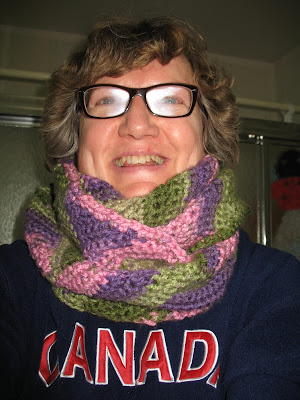 This is definitely a warm cowl - see my glasses steamed up - and I joked about it being able to double as a cervical collar in case of whiplash. Hopefully, the stiches will relax more after several washings. My daughter suggested that I try fabric softener, but that can also "bulk up" fabric, so I opted not to try that. Here's a close up of the stiches. 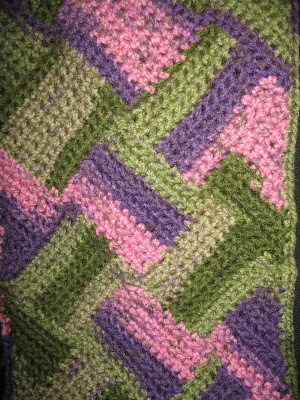 That's all for now. The good news is the renovations to my "studio" are almost finished. I need to hang the pegboard on the wall and the window casing needs to be done. But I can already start moving the furniture in. I will share more about the renovation process in another post.