Know ye not that they which run in a race run all, but one receiveth the prize? So run, that ye may obtain. And every man that striveth for the mastery is temperate in all things. Now they do it to obtain a corruptible crown; but we an incorruptible.
1 Corinthians 9:24,25
Three months later, I finally realized that I hadn't blogged anything about the Ranfurly Fair back on August 8. It had been 5 years, I think, since the last time I had entered any of my craft projects in the local fairs. Last year, I considered it, but then we ended up with the Corona virus pandemic interfering with everything. This year, while I may not have agreed with the decision, the premier of Alberta decided that we were "open for the summer." Some events proceeded and others did not, and I determined to enter some items in the Ranfurly Fair. I also considered entering some in the Innisfree Fair, but then decided to take my daughter and grandson on a quick trip to Drumheller, and we set out on the day of the Innisfree Fair.
In the interest of full disclosure, I have probably commented before that I find the small local fairs quite generous with their ribbons, and often they will award more than one first, second or third place ribbon in each category. I wanted to explain that when I say that I won either a first or second place ribbon on each item I entered.
In the Quilting Class, in the Table Runner category, I was awarded a 1st for On Guard For Thee, 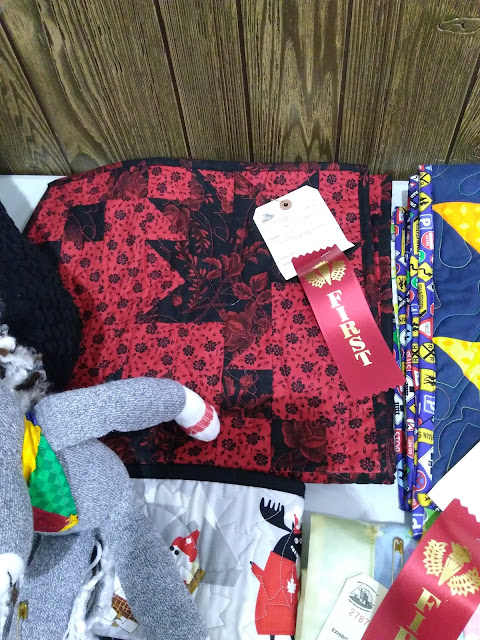 another first for Work Zone in the Baby Quilt category, 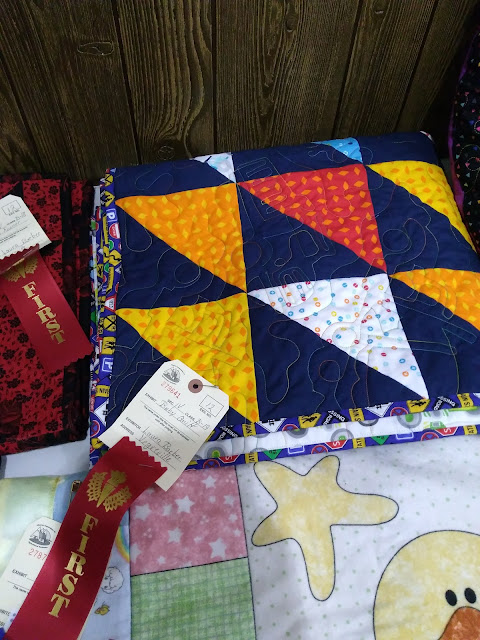 a second for Fiesta in the Lap Quilt category, 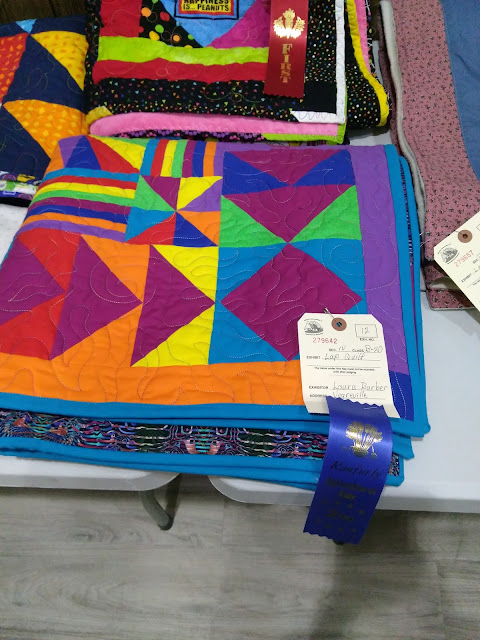 a first for Audacious in the large quilt category, 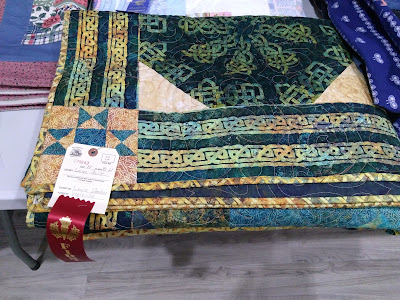 and a second for Celtic Ballad in the wallhanging category. 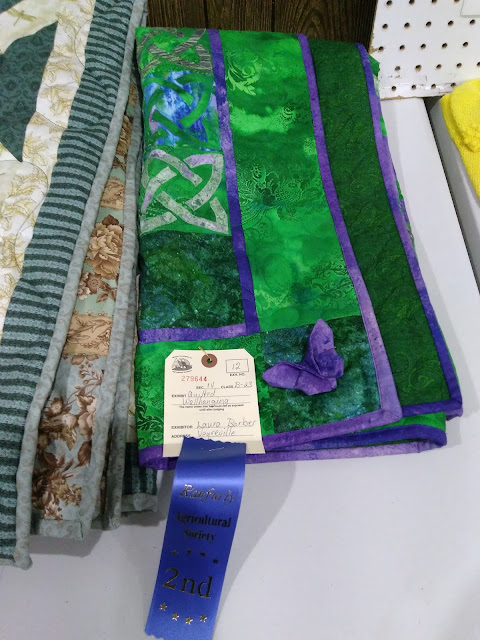 In the Knitting class, I won a first for Lavender Rhapsody in the afghan category. 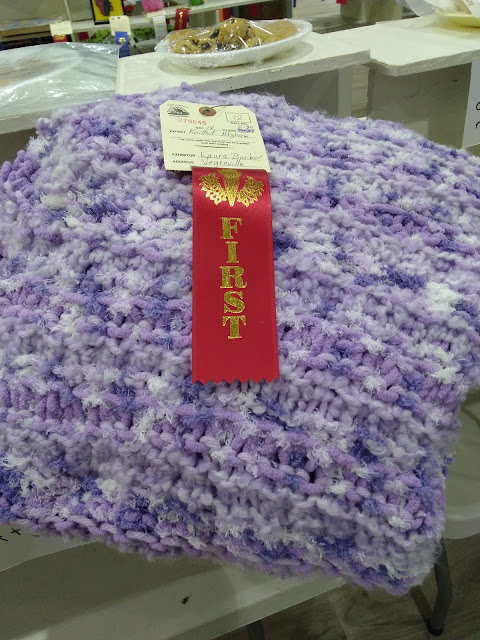 In the Crocheting class, I won a second for Mistletoe and Lace in the afghan category (Because I consider this a rather non-descript afghan, I was actually trying to finish the Circles Throw to enter it, but didn't quite make it. It will likely be entered next year). 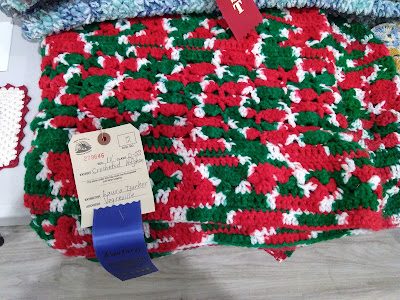 I won a first for the Daffodil dishcloth 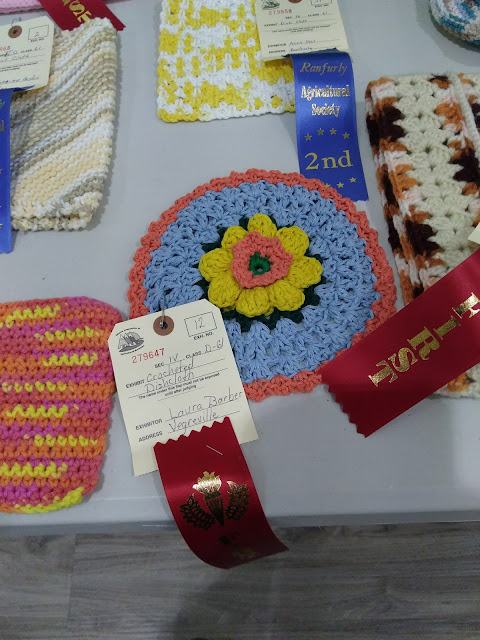 and a second for this bowl cozy in the Other Crocheted Item category. 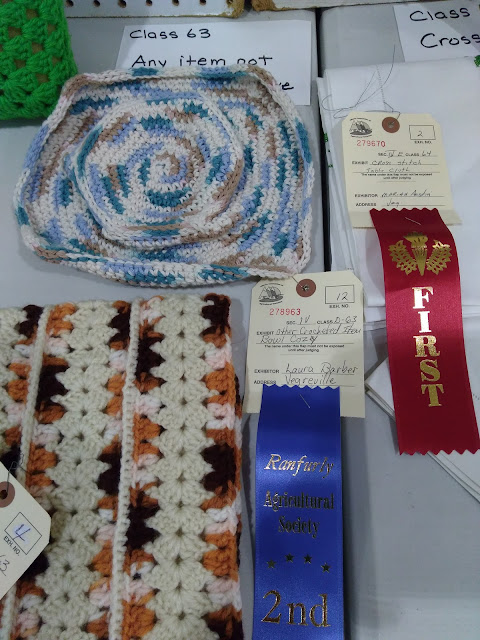 Finally, in the Christmas section, Christmas Tree Skirt class, I won a first for Blue Christmas, 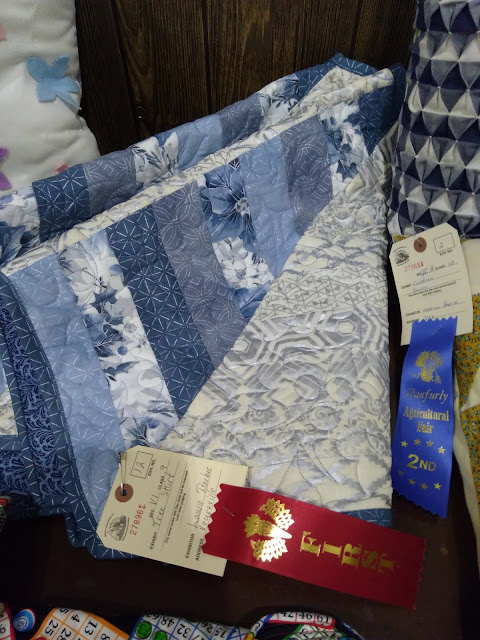 and another first for Country Christmas in the Table Runner class. (This is the centre runner of a set of three, so I can still enter one of the side runners in next year's fair, since they are not identical). 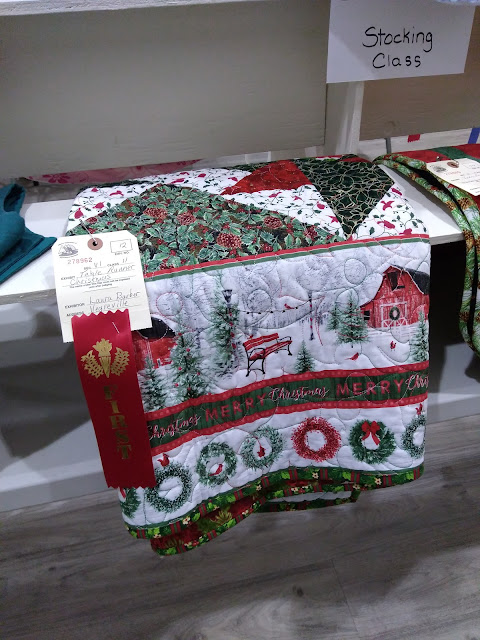 An interesting note is that On Guard for Thee, Fiesta and Audacious have each been entered in other contests, without placing at all. And that's the difficulty of most contests - there is usually only one grand prize, one gold medal, one first place...
But that's not true in the game of life. While my quilts may never be good enough to even be entered in Quilt Canada's Juried Quilt Show, and I certainly will never be an Olympic athlete, everyone of us can strive for the "incorruptible prize" mentioned by the Apostle Paul in the Bible text at the beginning of this post. That prize is eternal life, and it's already been won for you and me by our Lord Jesus Christ.
For God so loved the world, that He gave His only begotten Son, that whosoever believeth in Him should not perish, but have everlasting life.
John 3:16
You may never win a prize in a fair, contest or challenge, but none of us needs to be a loser in the game of life.
Posted by Laura B at 13:19