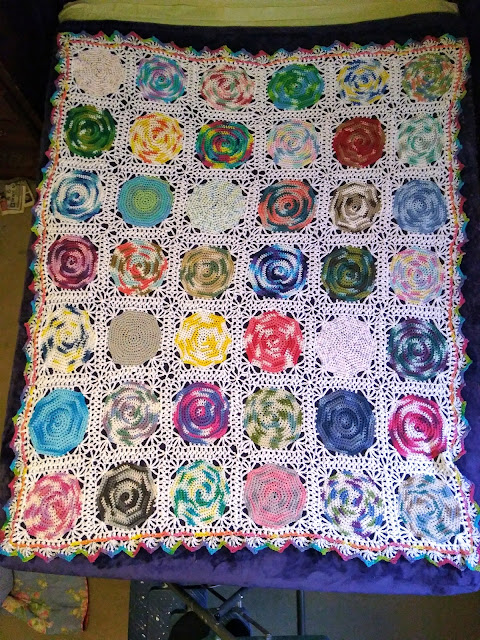 The word which came to Jeremiah from the Lord, saying, Arise, and go down to the potter's house, and there I will cause thee to hear my words. Then I went down to the potter's house, and, behold, he wrought a work on the wheels. And the vessel that he made of clay was marred in the hand of the potter: so he made it again another vessel, as seemed good to the potter to make it. Then the word of the Lord came to me, saying, O house of Israel, cannot I do with you as this potter? saith the Lord. Behold, as the clay is in the potter's hand, so are ye in mine hand, O house of Israel.
Jeremiah 18:1-6
Nay but, O man, who art thou that repliest against God? Shall the thing formed say to him that formed it, Why hast thou made me thus? Hath not the potter power over the clay, of the same lump to make one vessel unto honour, and another unto dishonour?
Romans 9:20-21

However, that's not the only change I made. Some time back, while sorting through clutter, I came across a crochet pattern for the Flat Braid Join. It was several years old and the pages had gotten mildewed, but when it came time to assemble this afghan, I wanted to try something other than sewing the motifs together. Trying to avoid using the mildewed pages, I googled and not only found the original pattern, but a new variation that allowed the crocheter to complete all of the joining without breaking the yarn. That was even better! 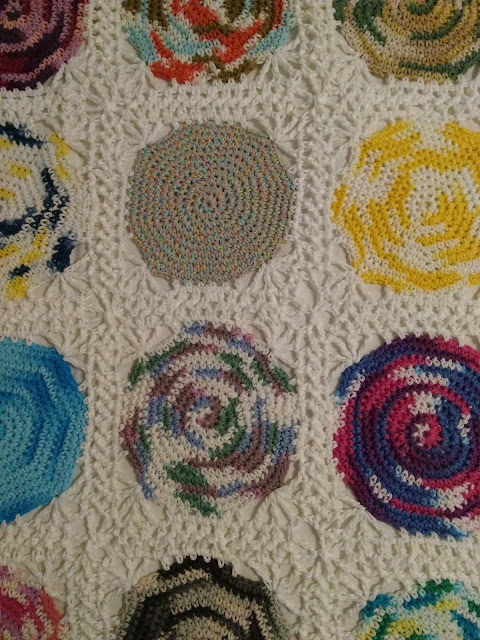 The joins at the corners were a little complicated, and they didn't all turn out as well as I would have liked, but I'm still quite pleased with it overall.
As I was working on the joining, I was considering what was going to work for the edging. With this type of join, I was doing a half flat join on the edges of all the blocks, including the outside edges. This wouldn't necessarily work with the edging from the original pattern. Besides, the orignal pattern had the final round done in reverse crochet, which I really don't find very attractive. The website that has the new variation also has a link to a pattern that not only uses the flat braid join, but has an edging that works with it as well. (The afghan pattern is quite pretty, too). So I purchased the pattern and proceeded with the edging.
In the pattern, the edging is all done in white. I felt that my afghan already had enough white and chose to do each of the three rounds in a different colourway. 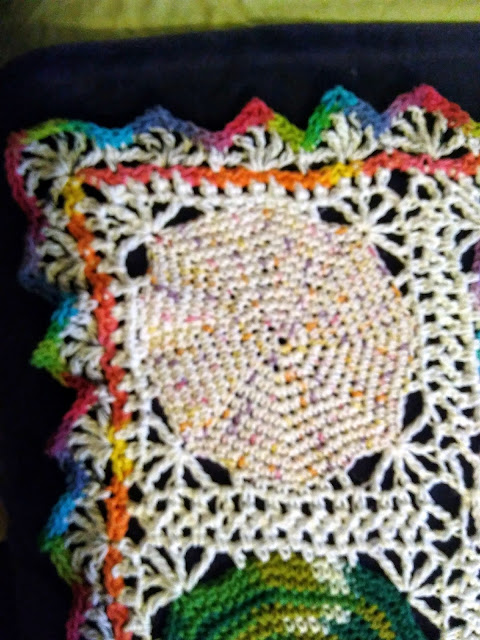 The circle motifs are done in the following colourways: Azalea, Beach Ball Blue, Blended Navy Lemon, Blue Camo, By the Sea, Candy Sprinkles, Chocolate, Coral Seas, Country Sage, Country Stripes, Creamsicle, Crown Jewels, Damask, Emerald Energy, Emerald Isle, Faded Denim, Fleur do Lavande, Floral Prints, Freshly Pressed, Fruit Punch, Garden Party, Granite Pink, Hippi, June Bug, Lemon Swirl, Lotus Blossom, Love, Marble Print, Mod, Moondance, Patio Pinks, Pepper, Pretty Pastels, Psychedelic, Purple Perk, Quiet Sea, Rick Rack, Stoneware, Summer Breeze, Summer Print, Sunkissed, and Swimming Pool. The border was done in Playtime, Salt and Pepper, and Lively. By the way, Lively looks very similar to Psychedelic, maybe slightly less loud.
And so, it's finished. And, in my opinion, it's much prettier than the original pattern.
And that's how life can be. Sometimes we plan our lives, like the original pattern. But the Artist recognizes that that pattern is not what's going to work best for our lives. And it can be uncomfortable, even painful sometimes, as the Master Artist works with the yarn. And, like the Bible text from Romans I quoted above, we want to ask Him, "What on earth are You doing?, Why are You doing it this way? I had my own plans and that's not the way I wanted my life to go..." And we often can't see how what looks like a mess of failed and aborted plans can possibly turn into something beautiful. But it can. And it will, if we trust it all in the hands of the Master. Because he promised in Romans 8:28:
And we know that all things work together for good to them that love God, to them who are the called according to his purpose.