Tulip the Decepticon and Other Quilt Blocks 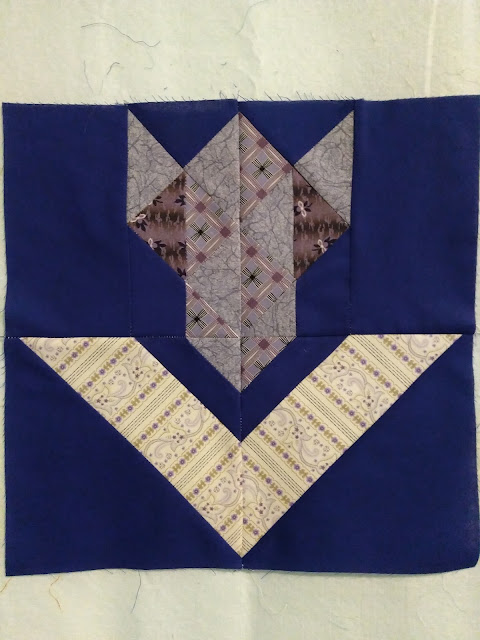 I honestly did not set out to make a quilt block that looks like a Transformer. It's actually supposed to be a tulip. A Tennessee Tulip, to be precise. But my choice of fabrics for this Sew Along resulted in this block looking more like a Transformer than a tulip.

See what I mean? I have therefore nicknamed this block Tulip the Decepticon. It's Brackman 785.7, if you know what that means. Brackman, as in Barbara Brackman, the author of the Encyclopedia of Pieced Quilt Patterns. I finally own my own copy, the newest third edition, just out last year. As someone who loves trying new blocks, this comprehensive volume has been on my Amazon wishlist for quite some time. But then I found out that Electric Quilt was bringing out a new edition. Why pay $150 for a used second edition when I can get a brand new third edition for far less than that? Yay! In addition, they also brought out an updated version of the BlockBase software, Blockbase+. Double yay! So, instead of drafting the blocks myself from 2" line drawings, I have software that will print out rotary cutting instructions, foundation pieces and/or templates in whatever size block I want. That makes me a very happy quilter!
And then I found out that Electric Quilt was having a sew along to teach participants how to use the BlockBase+ software. What better way to learn the software that learning by doing? So, I joined in. 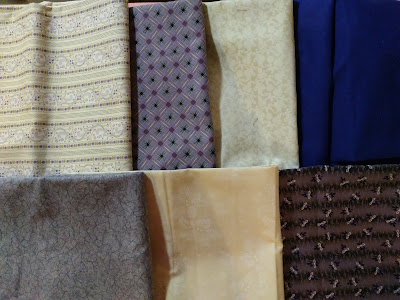 This are the fabrics I chose for the project. And here's the first block, Brackman 1273. 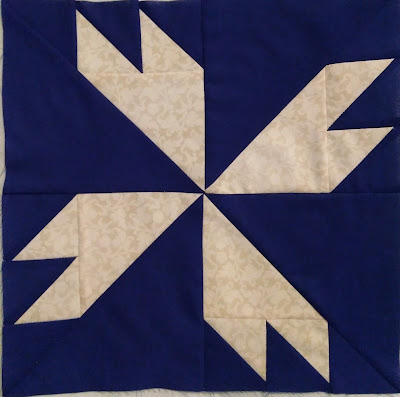 Since some blocks have many names, and some names refer to several different blocks, Barbara Brackman assigned each block a number. That way it's much easier to keep track of which block is being referred to.
But before I started this sew along, Bernina started an Old Block Quilt Along. I don't usually join in on these things because I generally have more than enough projects on the go. But I love old, traditional blocks, and I love trying new blocks. Besides, at the end of the year, I could win a Bernina! What's not to love about that? Owning a newer Janome, and a Brother (plus my vintage Singer...), I figured I would give the Bernina to my daughter if I won it. She just had a cheaper Singer, but then she told me that she bought herself a heavy duty Singer, plus she will someday get my mother's Janome, which is currently in my possession, and I figured I will keep the Bernina if I win it. I can't have my daughter owning more sewing machines than me. LOL!
So, here are the fabrics I purchased to use in the Bernina project: 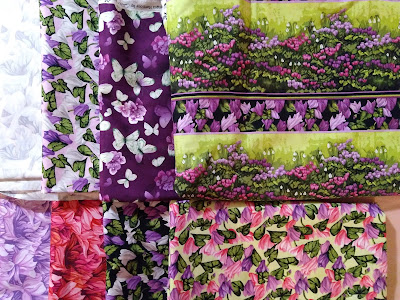 These fabrics are stunning and I think I could make the ugliest quilt blocks around and people would still love them just because of how beautiful the fabrics are.
Here's the first block, Brides Bouquet. 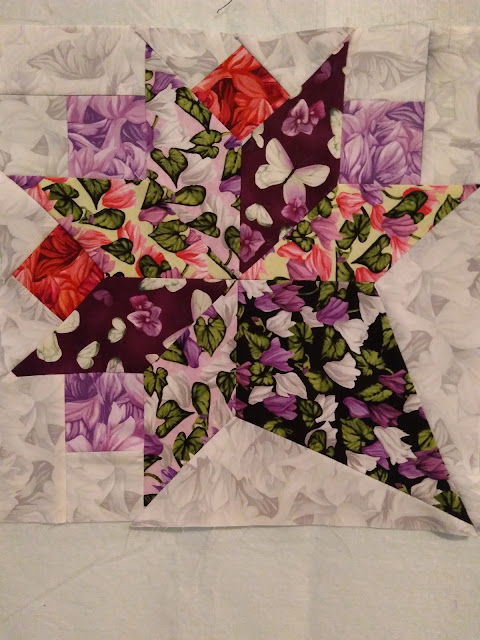 By the time I made up my mind to join these projects and purchased the fabric, I had some catching up to do. 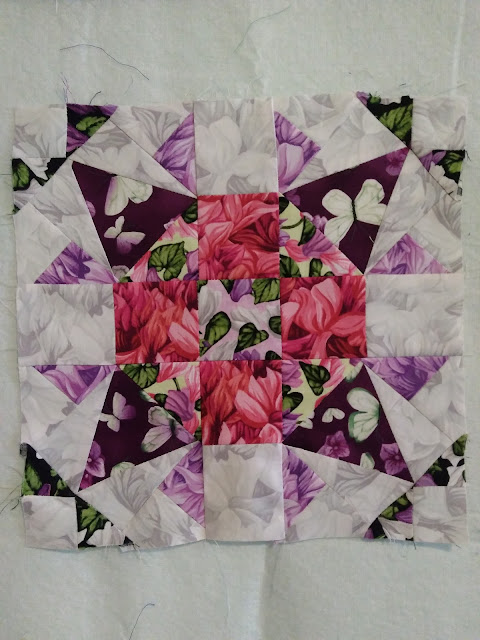 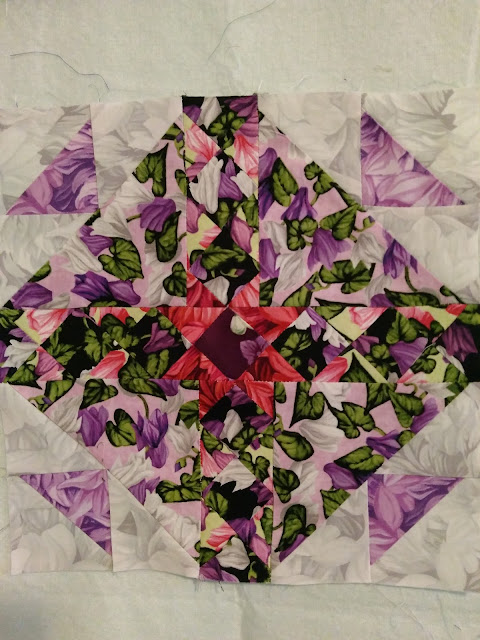 Bird's Nest, which I christened Rat's Nest, because it was such a mess. Still people loved the block just because the fabric is so pretty. 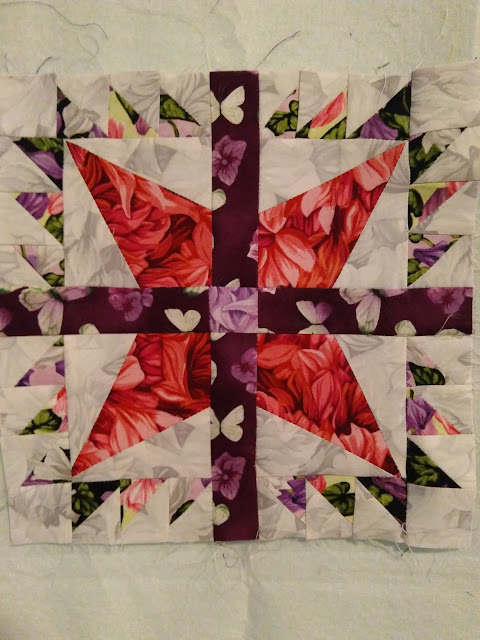 Cross and Star. So, having caught up on the Bernina project, I then had to catch up on the BlockBase+ one. 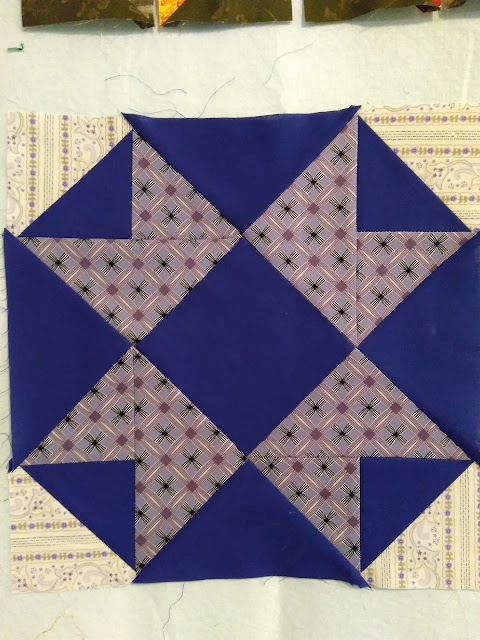 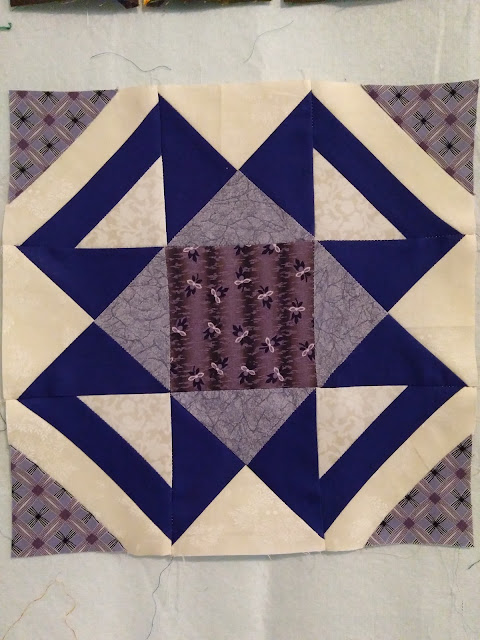 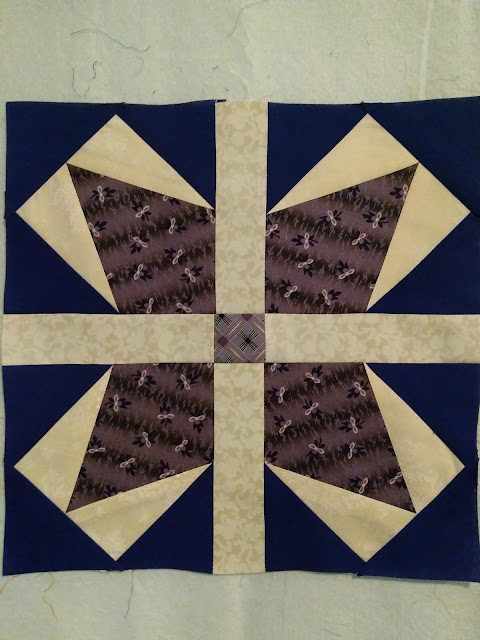 Brackman1915b.
The Bernina Quilt Along is one or two blocks a month over a year, for a total of 20 blocks (I think) and the quilt will be a maximum of 60"x80". The blocks are different sizes, so it will be interesting to see how they are all arranged together.
The BlockBase+ Sew Along, on the other hand, has only 8 blocks, one block every 2 weeks. The participants can chose what size to make the blocks. I chose a uniform 12" for all of the blocks and decided to add more blocks to make it at least a throw size. 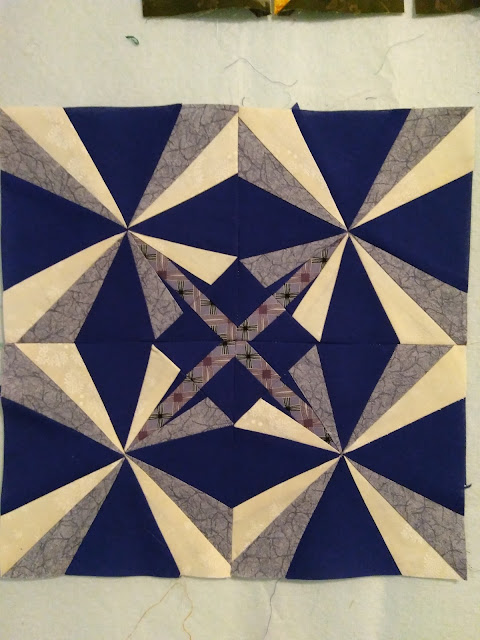 Brackman 1232, one of my own additions. There are some incredibly challenging quilt blocks in this book. 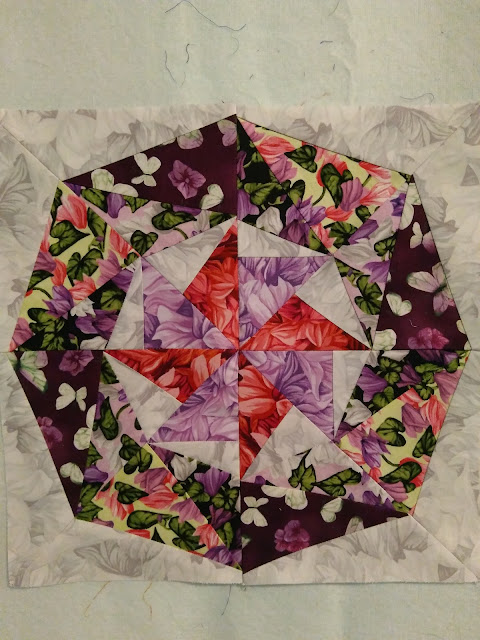 Morning Star. Still having to keep up with the Bernina project. 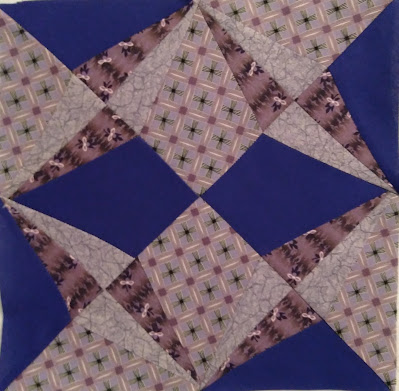 Brackman 2328, another one of my additions. I messed this one up because it should have had two of the solid purple triangles on the top and bottom, and two of the print triangles on the sides, instead of one of each on all four sides. But with all of those bias edges, I didn't really want to start ripping out seams. And I really wasn't that happy with my choice to use all purple fabrics. 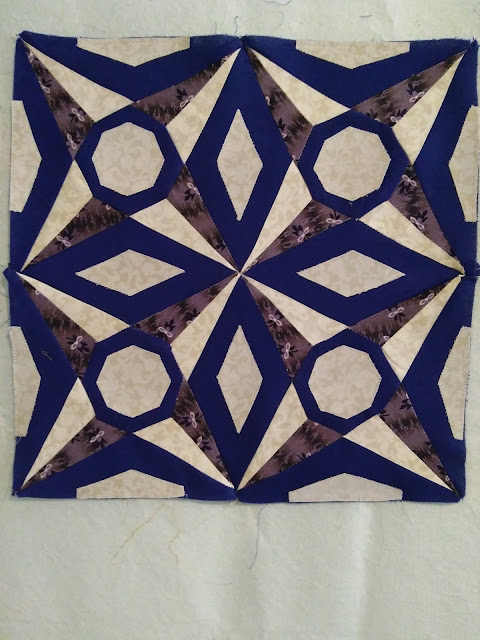 Brackman 3953. This one used a combination of foundation paper piecing, regular piecing and applique. And I think it's a truly amazing block. I likely would have never attempted some of these more challenging blocks if I didn't have BlockBase+, but this is one I chose to include. 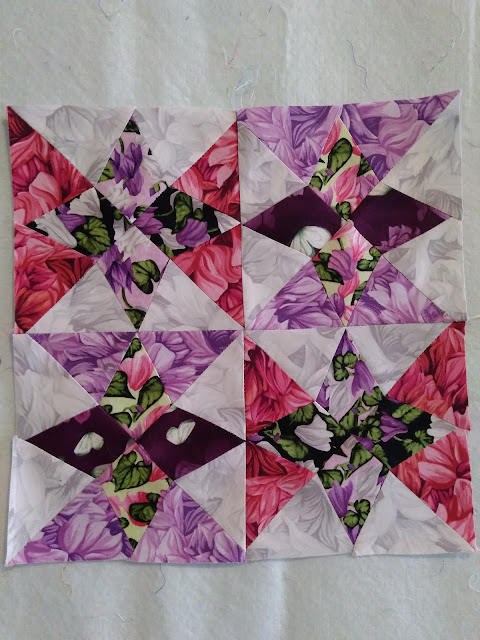 Mill and Stars. For the Bernina Quilt Along, my goal is to use some of all 7 of the fabrics (6 coloured fabrics, plus the grey texture for background) in each block. (The 8th fabric in the picture, the border print, is for the backing). This makes it challenging to keep it from looking like a "rat's nest" because the fabrics are rather busy. But I'm hoping I learned from the Bird's Nest block. 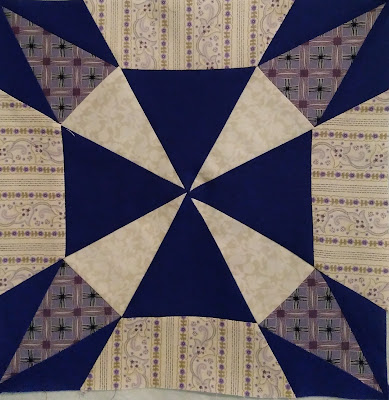 Brackman 2734. For the BlockBase+ Sew Along, I chose not to use all of the fabrics in each block, generally following the guidelines for the number of fabric choices by the number of colours in the book and software. 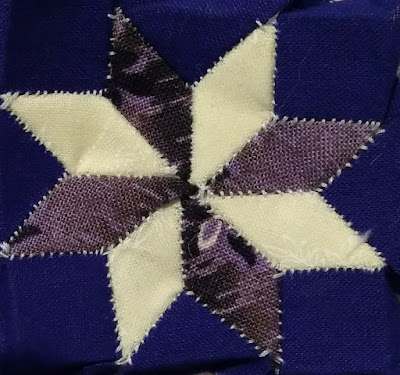 Because I got started on making some of the most challenging quilt blocks in Brackman's Encyclopedia, I asked in a Facebook Quilting group for recommendations on what they considered challenging quilt blocks. Someone recommended Brackman 3806.5. This one has 8 mini stars, each less than 2 inches square, as part of the design, including 8 tiny Y-seams! There is no way to make these stars using foundation paper piecing. I tried using the templates, but the pieces are so small that it's virtually impossible to stitch on a sewing machine. Hand stitching? Not my forte. And then I thought of English paper piecing. Yes, it's still hand stitching, but the cardstock would give a little more structure to the pieces while being stitched. So, the above picture is the first of the mini stars. Far from perfect, but still recognizable as a star. You'll have to watch this blog to see if I actually end up completing this block.
Meanwhile, I've got several quilts that are works in progress and I want to get them finished, so I'll get to those projects and put these blocks on the back burner for now.
Posted by Laura B at 19:42