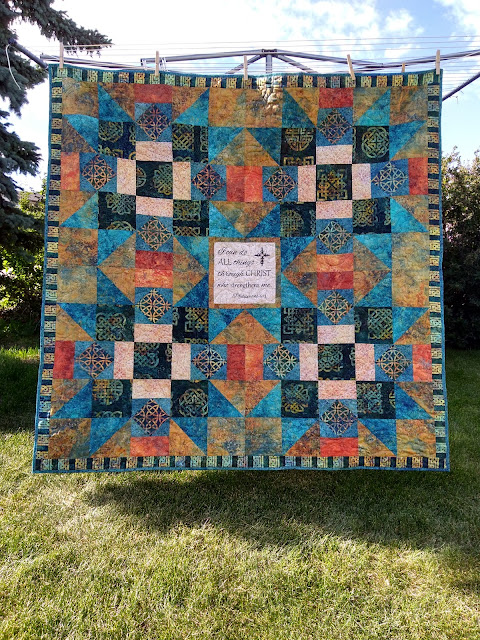 What can you do, what can you say when you find out that a young friend has been taken advantage of sexually by a pastor she knew and trusted? And it devastated her to the point where she attempted suicide. And I knew him as well, at least I thought I did. I ate in his home, I laughed with him, shared with him and prayed with him. But I guess none of us really knew him. My feelings ranged from being dumbfounded, to murderous rage, to heart-rending grief. And what do you do with those impotent emotions?

Quilting has long been my creative outlet - for stress, anxiety, depression and compassion. It started as just a hobby, but has become almost an obsession because I can use it to work out toxic emotions and frustrations. For me, when the going gets tough, the tough get quilting. I have made quilts for people who have lost a loved one, for people experiencing health challenges. But this is the first time I have made a quilt for such a reason. So, this quilt is rather unique.

First, I found out that the young lady's favourite colour is dark turquoise. Well, I had plenty of leftovers from Audacious (and still do), which includes dark turquoise. I had picked up a second panel with Bible texts/inspirational thoughts and I wanted to include something from there in this quilt. So, I had to find a pattern that I could fit it into, preferably one that would work up quickly.

I turned to my vast library and came up with the book, Supersize 'Em by Debby Kratovil. I decided to use the Starry Starry Brights pattern, because I could fit the panel in the middle. I had to use partial seams to do it, but those are a lot easier than Y-seams! I eliminated the final border because I just wanted a throw size quilt and with this border, it would have been bigger than I wanted.

I had to decide which Bible verse I wanted to include and had narrowed my choice down to "Be still and know that I am God" Psalm 46:10, and "I can do all things through Christ who strengthens me" Philippians 4:13. I finally settled on Philippians 4:13 because I wanted to give her courage that, with Christ in her life, she can get through anything.

I had plenty of the Stonehenge Solstice fabric, but no pieces big enough to make a backing. And as I pondered this quilt, I thought about the fact that this young lady is still a teenager, and decided that it needed a backing that would liven it up. The Stonehenge fabric is beautiful, but it is rather solemn. So, I found this. 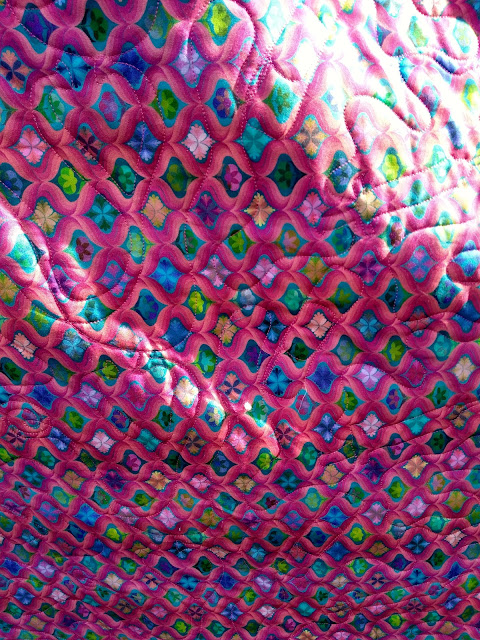 There was some of the same fabric in a dark turquoise, but not enough for backing. This one still has dark turquoise in it and it's very cheerful. I had a hard time convincing myself to use this as a backing fabric because it really doesn't coordinate with the quilt top. But the goal was liveliness and cheerfulness, and I decided to go with it.
Then I had to decide on a pantograph. What would coordinate with both the top and backing? Nothing! I could have chosen a nondescript feather or swirl or paisley. But this young lady is entering nursing school this fall and I do want to let her know that she still has a life and a future and not to lose sight of her goals. So, I went with Lady with the Lamp. 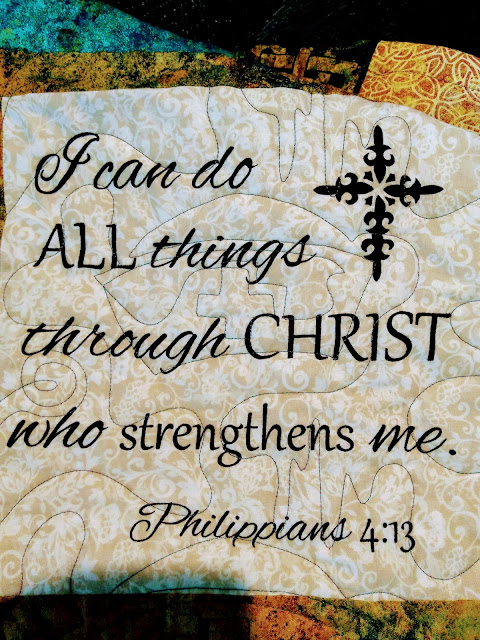 You can see the nursing cap in this picture, plus part of an ECG tracing (above and below the nursing cap to the right) and the end of a stethoscope on the left. Also included are bandaids and needles/syringes. A fun pantograph by Dave Hudson from Urban Elementz. I love how the nursing cap ended up right in the centre of the quilt. Even though we don't wear caps any more.
Finally, I had to come up with a name for this quilt. Starry Starry Brights didn't work because the quilt top really isn't bright. A lot of the Stonehenge fabric has stone-like texture, so I played around with that a bit, and came up with The Solid Rock. There are many Bible texts and hymns that liken Jesus to a solid rock, and I wanted my young friend to remember that Jesus can be depended on, He never fails. And, of course, there's this hymn.
Posted by Laura B at 19:44