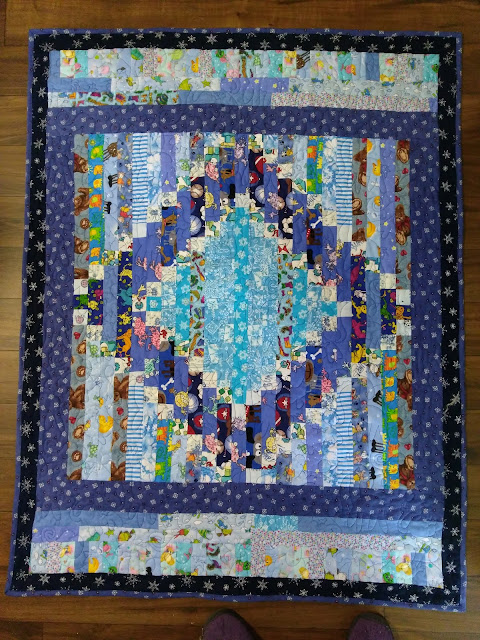 One of my favourite antique malls had a vintage sewing and crafting show and sale last month, where I spied what I thought were several flannelette jelly rolls for $9 each, and so I purchased one in blue children's fabrics. When I make a quilt for a baby or child, I don't normally use fabric specific for children or babies. I like to make them big enough and with non-age specific fabric so that the child can use them throughout life, if the quilt lasts that long, without them being embarrassed by the rubber ducks or teddy bears or whatever on the fabric. However, I had one more baby boy quilt to make, and this appeared to be a deal too good to pass up. Was I wrong! First of all the strips were not 2½" wide, nor were they all the same width. They were an inconsistent 2", and some were so poorly cut, that they varied in width from one end to the other. They were not all the same length. Some were cut lengthwise along the selvage, and included the selvage and the warning to not use this fabric in children's sleepwear! At least one strip had a flaw in it that rendered that section of the strip unusuable. I later told my buddy Phil, who had been with me at the antique mall, that if this mock jelly roll had been sold by a quilter, she (or he) should be ashamed of herself, selling to other quilters what should be thrown in the garbage, or at the very least sold as "scraps" or "as is." Caveat emptor (let the buyer beware).
At the same time (and from the same booth), I purchased this book:
I had every intention of using my not-a-jelly-roll for one of the patterns in this book, so I was quite disappointed to find that it wasn't going to work. But I do like a challenge and am good at math. With some major recalculations, I was able to figure out how to use my strips for the Decadent Victorian pattern. I planned on reducing the size of the quilt anyway, but by eliminating borders, not by having strips that were smaller than I had realized. I purchased some fabric for the borders (medium blue and navy blue). I probably have enough leftover strips that I might have been able to finish the quilt top with them, but I was tired of having to work with these wonky pieces of fabric. And I felt that it was already scrappy enough. I needed some consistent fabric to give it more structure. I had to buy something for the backing and binding anyway. The backing is the navy blue snowflake. It looks black in the picture, but it is dark blue. The main medallion follows the pattern, with my recalculations, but I did the borders a little differently. 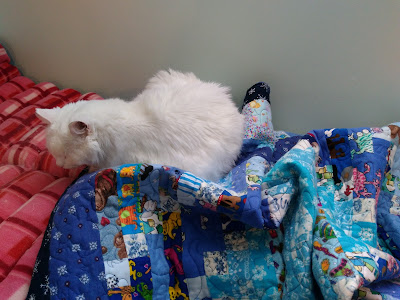 All my quilts are cat-tested and approved, and this quilt was no exception. I put that pink and red cushion on the corner of the table beside my sewing machine for Mystery because he loves to be near me wherever I am in the house. However, he thinks it's far preferable to test out whatever project I am working on rather than sleep on his cushion. Because this quilt is made of flannelette, his hair sticks to it like glue. And it was very noticeable on the dark backing. So, I went over both front and back vigorously with my lint roller once the quilt was finished.
For the quilting, I used this sample cone of Superior Threads Magnifico that came with my machine. 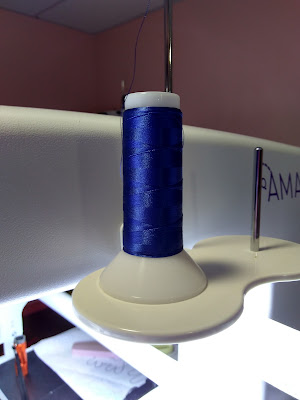 It's such a pretty blue. I used the Animal Crackers pantograph (Patricia E. Ritter/Urban Elementz). 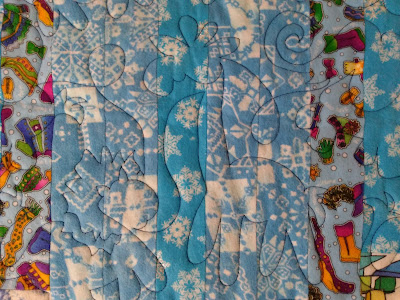 Can you see the lion, the giraffe and the elephant? Unfortunately, I was having major issues with "eyelashes" in my quilting, something which I haven't quite resolved to my satisfaction.
I was able to find a good match in my thread stash for topstitching the binding (which is what I was doing when Mystery decided to test the quilt). 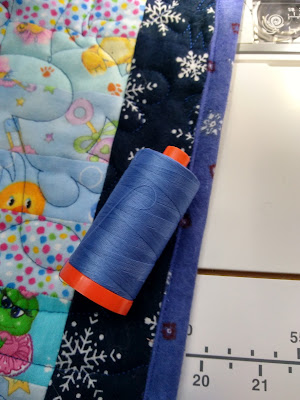 All things considered, I think it turned out quite well for my first flannelette quilt.
But I'm not finished telling about my shopping trip. After the antique mall, we went to a thrift store. And honestly, I was whining because it's in a busy part of town with a tight parking lot - not fun when you drive a full-sized pickup truck. However, I did apologize and was even more apologetic when we entered the store and I almost immediately found the Dear Jane book. I have been wanting one for some time and put it in my Amazon wish list. I didn't buy it, however, when it was $40 or $50. And now the cheapest you can find it for on Amazon is $158.24. I don't know who would even consider spending that kind of money on it, but I have seen it for over $1000! 😮 Seriously, this is not the Geneva Bible we're talking about or an original Charles Dickens or Jane Austen. It just happens to no longer be in print and all that's available is software now. And I wanted the book, not the software. So when I found it in a thrift store for $3.75, I was thrilled. Plus I got a couple of other quilting books for even less because they were on half price that day. All in all, it was a good shopping day, in spite of the less than perfect fabric purchase. And I was still able to make a quilt with the fabric strips and figure I probably got my $9 worth out of them. I actually went back to pick up another one of the fabric rolls before I checked out, but couldn't find the booth again. I thank the Lord that I didn't. While I was able to make do with the one that I had, I wouldn't have wanted that disappointment and headache with a second (or a third?) one. I think there had been four and I had been tempted to buy all of them.
When life hands you lemons,
you can make lemonade.
And when life hands you scraps,
you can make a quilt!
Posted by Laura B at 12:51